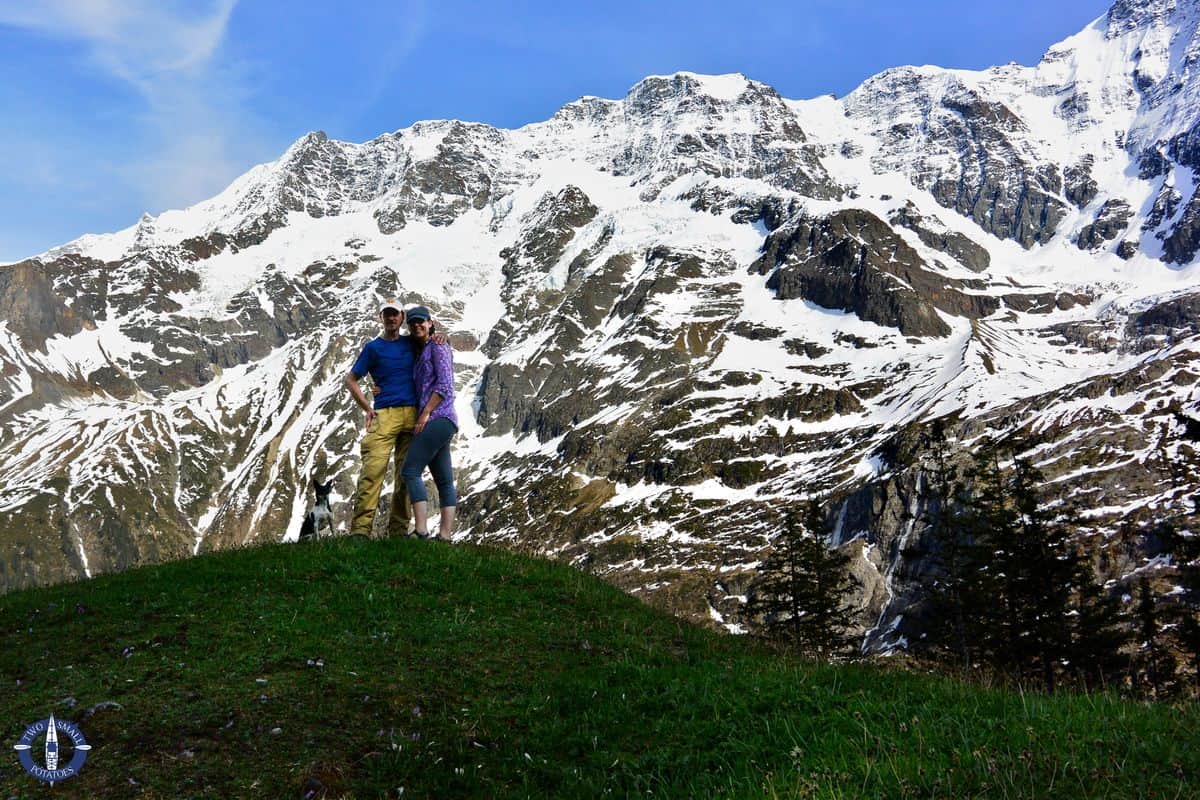 We pose for a photo with Touille, our dog, near Lake Oberhorn below the Tschingelhorn.

Switzerland
May 11, 2015 0
*This post may contain affiliate links. If you purchase through these links, we may receive a small commission at no extra cost to you. We only recommend companies we trust!

The town of Stechelberg in Switzerland is just a smattering of quaint country homes, a restaurant, and limited tourist lodging, all tucked almost secretly away between the imposing canyon walls of Lauterbrunnen Valley. It’s where the road essentially ends, at least for through-traffic. A narrow, gravel road continues past town for a ways, paralleling the lower reaches of the valley’s Jungfrau UNESCO World Heritage trail, but a sign at the end of town clearly forbids all but local traffic on this road. For anyone driving into the valley to hike the stunning UNESCO hike, this is the place to leave your car. From the large, paid parking lot on the edge of town, it’s just a short walk to the official start of the trail in Stechelberg. Unknown to most tourists, the Jungfrau UNESCO trail offers some of the most stunning views of the Swiss Alps by foot, yet happens to be one of Switzerland’s most overlooked hikes.

This trail is what had brought us to the end of the valley on a gorgeous, sunny May day. After breaking down our campsite at Camping Ruetti, we visited Trümmelbach Falls, then drove the short distance to the paid lot in Stechelberg. At the parking area, we dropped in around 7 chf, anticipating that we could complete the hike in under 5 hours.

We were pretty jazzed about the loop hike that would take us past the Obersteinberg mountain hotel. Lacking access by road or cable car, the only option is to hike in – our ideal kind of destination. With much of the trail in the shadow of the spectacular Bernese Alps, we still weren’t prepared for the near constant views of the famous trio of Swiss peaks – the Jungfrau, Eiger, and Mönch, as well as many of the valley’s 72 waterfalls – that the hike offers.

Within minutes, we’d gained enough elevation to look back for a lovely view of Stechelberg tucked away below us in the valley, the massive Mürrenbach Falls as a backdrop.

I realized quickly that the trail would be even more beautiful than I’d expected, as well as more strenuous.

Though the entire loop hike is only 11.2 km (7 miles) round trip, the trek from Stechelberg to the mountain hotel of Obersteinberg, roughly the half way mark, is all uphill. And not just uphill but steep.  In less than 6 km (3.5 miles), hikers gain almost 900 m (3000 ft) of elevation.

When we saw the first small waterfall delightfully tinkling down across our trail, I couldn’t resist stopping to douse my hot feet and wet a bandanna for the sweaty trek to come.

When we topped a small rise, a beautiful old brown chalet came into view, perched above us on a steep, grassy slope.

As I admired the classic painted shutters and flower baskets, a head abruptly appeared along the cattywampus silhouette of the field. Seconds later, a second round-faced fuzzy alpaca appeared behind the first. An entire herd suddenly materialized above us, staring with intense curiosity as we passed below them on the trail.

We continued to climb, at times following the gravel road for a short ways until our hike resumed on the UNESCO trail.

Just above the Trachsellauenen mountain hut, we finally lost the road completely. The forest closed in around the trail as it narrowed, offering welcome relief from the sun.

Discovering the remnants of several old stone walls and what appeared to be furnaces, we rested for a bit, then poked around. We’d come across the remains of a mining site. At one time it included up to 18 buildings, including a smelting plant and living quarters for the miners. For centuries, this area was mined for iron ore, lead, and silver, though it ceased functioning in 1860 and wasn’t excavated until 1992.

We reached the end of the road, even for local residents, at Trachsellauenen. From here on up, it was trail only with numerous dirt switchbacks shored up with logs.

The alpine peaks grew more spectacular as we continued to gain elevation in the valley, and we passed countless huts and chalets, all still closed for the winter season.

Passing the Hotel Tschingelhorn, the trail finally became flatter as we encountered the most spectacular scenery of the entire hike. Largely above the treeline, we had unobstructed views of the impressive chain of the Bernese Alps.

So many craggy peaks marched like soldiers parallel to our trail on the other side of the valley.

Crossing a small creek, we paused to look nearly straight down as it dropped for hundreds of feet. Like a mountain goat, Travis trotted down off the trail to a wooden platform built just next to the creek and refilled our water bottles. Though we had our Katadyn water filter with us, we drank straight from the creek. The water virtually sprang from the very ground just above the trail, leaving little chance for it to pick up much that might make us sick. Icy cold and fresh, it tasted like it came straight from a glacier – probably because it did.

Practically within sight of the Obersteinberg, we hit snow. Still grateful I’d opted to wear my Rafters, my favorite hiking sandals, I concede that it took me longer to navigate the snow drifts than Travis, who clomped through comfortably in his heavy waterproof boots.

Considering that my feet were gently kissed by alpine breezes for the rest of the hike though, I maintain – no regrets!

Emerging finally around one last corner, we could see the end of the valley, Obersteinberg Hotel, and the towering Tschingelhorn rising above it all.

Since the hotel was deserted, we said hello to their resident mule in passing, then continued on to a bench at the end of the valley to have a snack while enjoying the view.

Our plan all along had been to hike the most difficult and longest loop hike from Stechelberg, past Obersteinberg, and then even higher up and around tiny Lake Oberhorn before continuing back down the trail below the adjacent line of peaks.

Unfortunately, we realized when we reached the end of the valley that it was still too early in the year. The trail was impassable. We could see it just above us where it curved around to the right, climbing up beneath the peaks still buried in snow with waterfalls carrying melt water from glaciers above.

Bummed that we couldn’t complete the entire hike, we satisfied ourselves with the views before us instead.

Finding another trail that headed downhill near our bench, we took that instead, preferring not to backtrack and knowing it would inevitably take us back down into the valley.

In no time at all, we arrived via this alternate route back at Trachsellauenen near the mining ruins. We followed the White River as it wound through the valley beneath the Eiger, Mönch, and Jungfrau, leading us back to our starting point in Stechelberg.

Happily digging through our road trip bag for snacks for the drive home, I hung my feet out the window as we drove slowly back down the valley, enjoying the cool evening air. Images of the scenery we’d just seen still flashed in my mind like a burnt bulb that doesn’t yet know it’s spent.

I could not imagine it would be possible to see more spectacular scenery in Switzerland. Little did I know what was waiting for us on future trips to Aletsch Glacier and a weekend camping trip to the Matterhorn, the iconic Mountain of Mountains!

Hike to Obersteinberg Map
Know Before You Go
Take a minute to PIN it!
111 shares