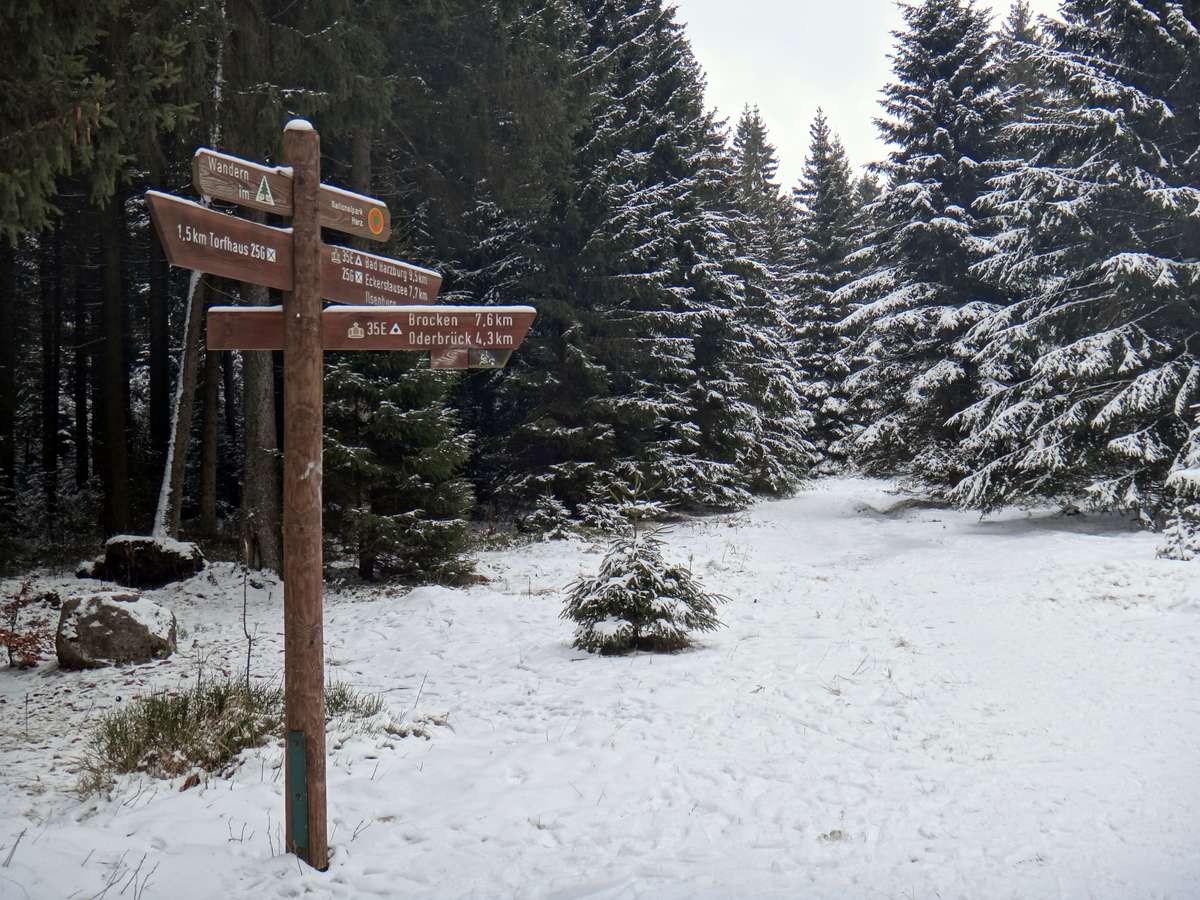 It’s feasible to drive across the entire country of Germany, north to south, tip to tip, in less than 11 hours.  Living in Europe, we constantly see the pervasive impact of humans on the environment; at times it seems impossible to escape.  Yet this country of just 357,000 square kilometers is home to 16 national parks, an impressive testament to the value that Germans place on preserving and protecting their natural surroundings.

For us, the closest of these parks is the Harz, just a 45-minute drive from our home to its southern boundary.  On Sunday after hiking the Baumwipfelpfad (Tree Top Trail) near Bad Harzburg, we drove south into the very heart of Harz National Park to do some winter hiking.

Arriving at a huge parking area near the TorfHaus, we were both surprised to see that even during the late afternoon on a dark and cold Sunday, the lot was nearly full.  As soon as we rounded a corner past the TorfHaus, we saw why.

Mobs of kids on blue plastic sleds madly giggled their way down a respectable sledding hill.

At the bottom, employees clipped the sleds onto a line to tow them back uphill.  Riding the sleds partway up, the kids knew to bail off right before they hit a wooden barrier, at which point the sleds were whisked up into the air to continue their journey to the top of the hill.  We’ve been sledding and tubing before, but this was the first time we saw a system quite like this.

Setting off down the first trail-head we found, we inadvertently ended up on the Goethe Trail.

One of the most popular trails in the entire park, the Goethe Trail receives upwards of 200,000 visitors a year, though most of them hike it during the warmer summer months.

Enjoying the quiet of the forest in the snow, we happily traipsed through the woods for a couple of hours,  eventually stumbling across a clear cut.  We could see the tower on the summit of Brocken Mountain jutting above the treeline in the distance.

Knowing we didn’t have enough daylight left to hike the entire 16 kilometer round-trip hike to the Brocken, we still debated about giving it a go.

Uncertain if the parking area closed at 6 pm though and not wanting to have our car locked in overnight as it had been recently at a parking garage in Göttingen, we reluctantly turned back.

As we backtracked along the trail, we both continued to search for animal tracks.  Each time I found a new set, I tried to correctly identify them, a task made more difficult with Touille’s little foot prints marring the trail.

As a kid, Travis learned to identify every kind of critter living in North Idaho by sight, by their tracks, and from their scat.  Over the years, he’s taught me how to tell the difference between goat tracks and deer tracks, coyote, rabbit, and lion, in the snow and spring’s mud, passing on what he’s learned from his dad.  Whenever I’m able to correctly identify a set of tracks, I feel warm and fuzzy. Not only is it a fun challenge, but in the absence of actually seeing a wild critter, the next best thing is to see proof they’ve been right where you are.

Harz National Park is one of the few places in Germany where hikers have a chance of seeing a Eurasian lynx in the wild.  The last one was shot in 1818, but locals have been working to reintroduce them to the park since the 1990s.  Though they remain severely endangered, they’ve made a comeback in recent years. Even so, neither of us really expected to see one. In our experience, big cats are some of the most elusive of all critters. All we can do is keep our fingers crossed that one day we’ll see a lynx in the wild.

Never one to wuss out on us, Touille called it quits shortly before we arrived back at the parking lot.  When she started limping on three legs, I scooped her up and realized she had ice actually frozen between her little toes.  Snuggling her in my snowboarding jacket, she rode the rest of the way back to the car in a warm cocoon.  No doubt she’ll enjoy hiking at Harz even more during the summer, when we’ll undoubtedly return to complete the TorfHaus to Brocken hike.

Harz National Park might get a fair number of visitors, but it’s still a peaceful woodland oasis offering a chance to see wildlife, especially during the winter.

Know Before You Go
Map of Goethe Way Hike
72 shares