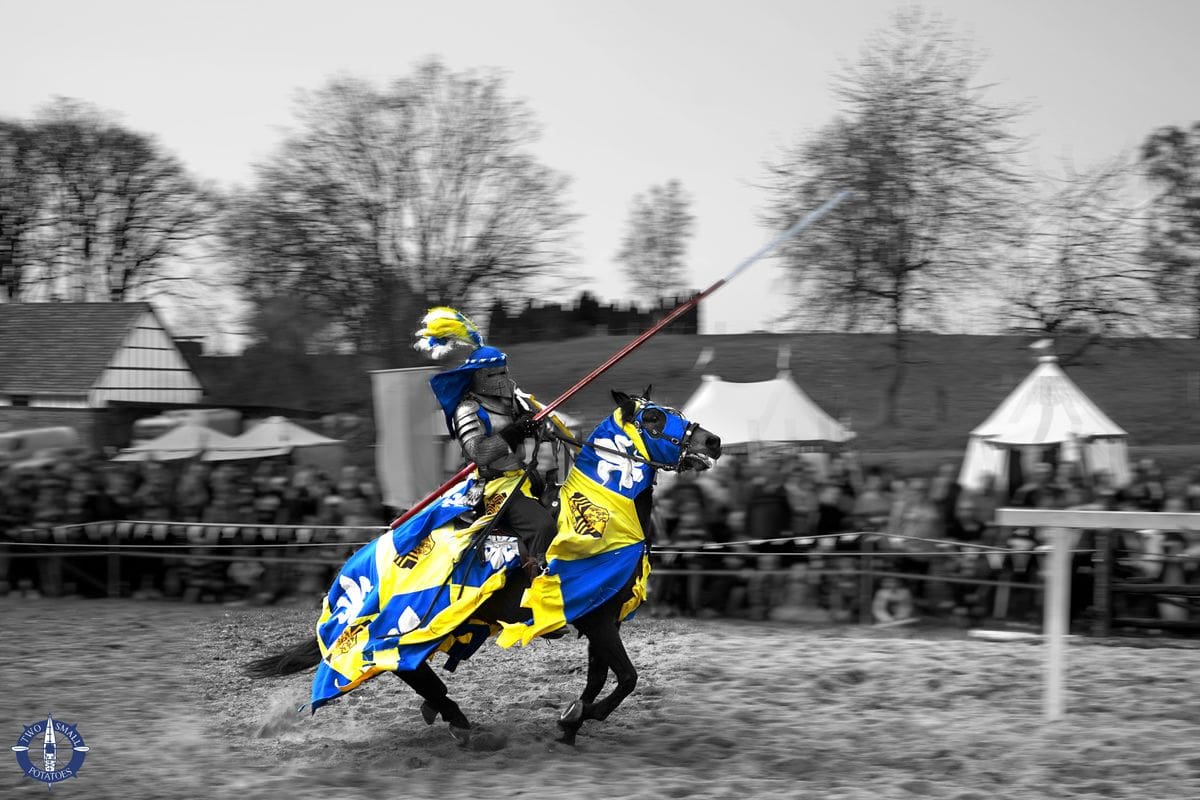 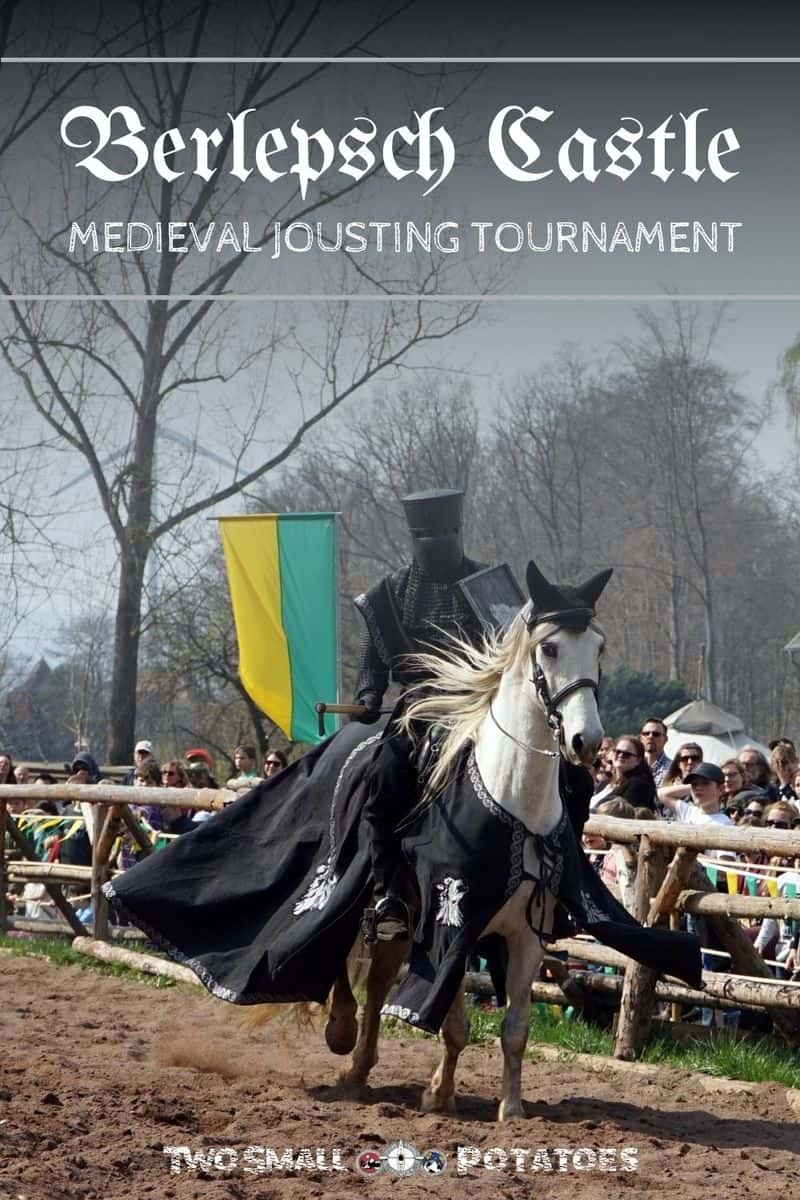 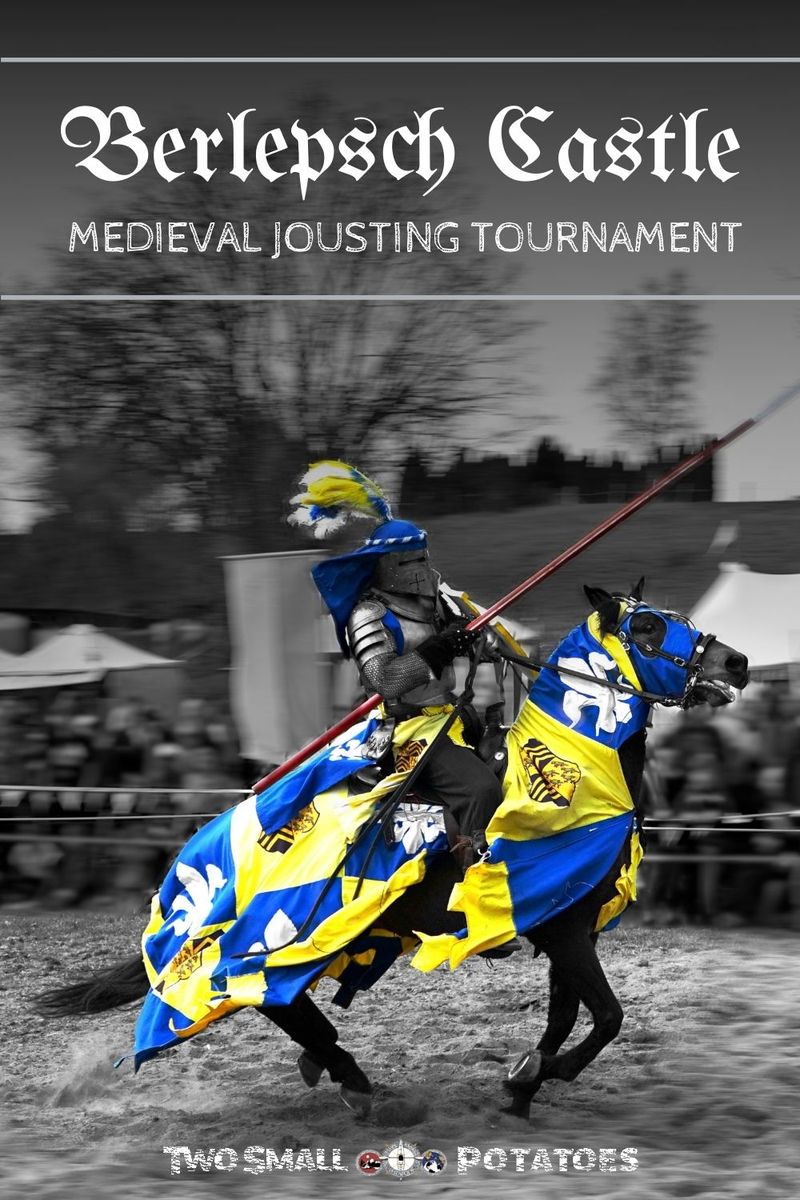 Germany is a land of magic and fairytales, kings and castles. And who better to protect those ancient kings and castles than medieval knights on horseback? It might be modern day, but oft times it doesn’t feel that way in a country so deeply rooted in tradition. Especially this time of year. Every April, locals in the state of Hesse flock to Berlepsch Castle to see the Berlepsch Jousting Tournament.

Clearly we had to find out what this crazy event is all about!

Where is the medieval jousting tournament held?

The medieval festival takes place on the grounds of Berlepsch Castle, which dates from the 14th century. Booths are set up on the lawns right next to it and along the road to the castle. The jousting ring and encampment for participants are both in a large grassy field about 300 meters east of the castle.

The exact layout varies a bit, depending on the year. Still, you can’t miss the jousting ring. If you navigate to the castle, you should easily find your way around to the various events and offerings.

If you somehow can’t find the jousting arena, just ask anyone. It’s a small local event with few non-Germans, but even if you don’t speak German, folks are incredibly welcoming and friendly and you’re bound to find someone who speaks English.

The castle itself is fairly rural and isolated, surrounded by mostly thick forests and patchy fields outside the small town of Witzenhausen in central Germany.

It’s the perfect location for a medieval festival.

The fastest and most convenient way to get to Berlepsch is by car. It’s roughly 2 1/2 hours from Dortmund, Hanover, Leipzig, or Frankfurt.

Parking is plentiful in a huge grassy field nearby, and they only charge €1 for the day.

What is medieval jousting?

If you think about it, jousting was really one of the world’s earliest extreme sports. The practice developed as a way for knights to train for combat.

For those who don’t know what it is, it’s a contest of strength, skill, and speed between two participants. On horseback, the riders race toward each other at full gallop and try to land a direct hit to his opponent with a long wooden jousting pole, or lance.

The objective was either to kill the other rider or to at least unseat him from his horse.

Though the first record of a jousting tournament dates from 1066, jousting didn’t reach its height in popularity until the 13th through 16th centuries.

By the 17th century, it had fallen out of popularity. Eventually it was done just for sport or entertainment.

Besides the jousting contest, the tournament showcases a bunch of other events on horseback.

Before any of the events start, the announcer introduces the contestants, or knights. The riders come out one by one and make a circuit around the ring so you can see them up close.

Think of it as the world’s first dating app.

Undoubtedly the specific events and order of events changes each year.

When we visited, one of the first events was ring tilting. In this game, three concentric metal rings – each smaller than the last – are placed in a straight line down the length of a wooden fence like a hitching post. At a run, the knights try to jab their jousting lance through all of the tiny rings.

And they are so tiny!

I’m not sure I could reliably spear three rings on a lance on foot, let alone on a galloping horse.

In this event, a rider grabs a hatchet and runs down the length of the ring, chopping the hatchet at a small fixed target midway down. The rider can’t drop the hatchet or miss the mark.

You’re all familiar with relay races, right? Where teams compete by racing back and forth to complete a series of tasks and the first team to finish, wins.

In the relay race at the Berlepsch tourney, the competitors ride back and forth three times. Each time they reach the far end, they have to collect an item. First is their shield, then helmet, and finally their sword.

Jousting actually ended up being the last event of the day. I think they were saving the best for last. It was as crazy as we thought it’d be!

Pair after pair raced toward each other, lances outstretched.

Every time, the lances looked wildly askew until suddenly at the last second, the knights would snap them toward the opponent’s oncoming shield. Each time one of the knights made contact, the wooden lance would explode into pieces with a sharp crack.

According to jousting rules, the winner is the knight who breaks two lances on his opponent’s shield.

Here’s a little video of two of the knights jousting.

Make sure you turn the volume up a little! The drums and music they selected are perfect, and you have to hear the German announcer to get the full effect of where you are – at a medieval castle in Germany watching a freaking jousting match!

This is by no means a complete list of events.

In fact, one of my favs was a simple race, with each rider starting from opposite ends of the ring, racing toward each other, pivoting back sharply at the end like in barrel racing, and being the first to reach the half way point to grab a trophy propped on the center rail.

So fun to watch!

Overall, it was a great mixture of events.

Some were more funny while others required crazy skill, but we liked all of them.

How much does the Berlepsch Jousting Tournament cost?

Ticket prices for the festival are reasonable, especially if you’re visiting with kids.

Travel Tip: They also offer a family ticket for €16, which covers two adults and two kids under age 12. Saves you €10! Including the euro for parking, it’ll only cost €17 for a family of four.

Can you bring your dog?

Germany is a country that loves dogs. They’re welcome in restaurants and many shops, on castle grounds and even in some castles.

As long as they’re on leash and they’re well behaved, they’re very welcome at the festival.

When is the Berlepsch Jousting Tourney?

The jousting tournament at Berlepsch Castle was first held in 2018, so it’s fairly new.

It takes place annually in April, though the dates differ. Typically it’s a 2-day festival held over a weekend.

Travel Tip: It can be hard finding info about the tournament in advance. You likely won’t find anything in English. It’s best to contact someone at Berlepsch Castle by phone or email before your visit to confirm the exact date and time of the next festival.

Are the costumes and equipment cheesy?

Or at least it didn’t seem like it to our untrained eyes. We’re not historians and certainly can’t tell the difference between an 11th century English sword and a 16th century German sword.

Still, everything we saw struck us as high quality and tasteful, from the authentic medieval costumes for the riders and their horses, to the armor, the weapons, the heavy cloth tents, and even the sturdy wooden posts for the jousting ring.

None of it seemed cheesy or fake – probably because it’s all been passed down in various German families for centuries!

Is the festival appropriate for kids?

YES! Above all, the festival is clearly intended to be fun, not violent or scary. Riders really do compete in a bona fide jousting tourney but with the intention of not hurting one’s opponent.

Modern jousting events are a far cry from the brutal medieval jousting tournaments in the Middle Ages. Though it’s not without risk, the organizers obviously take precautions to make it as safe as possible.

I’m pretty sure we saw more kids than adults while we were there, and most of them were under the age of 5. We’re child-free, but if we had kids, we’d definitely take them to this!

That said, you know your child better than anyone. If you think this will scare them, don’t bring them.

The entire event is a modern, family-friendly ode to days gone by.

If you’re looking for a unique thing to do in Germany in the spring, grab the kids, load up the dog, and pick up Oma and Opa for a fun day at the Berlepsch Castle Jousting Tournament.

Take a minute to PIN it!
27 shares