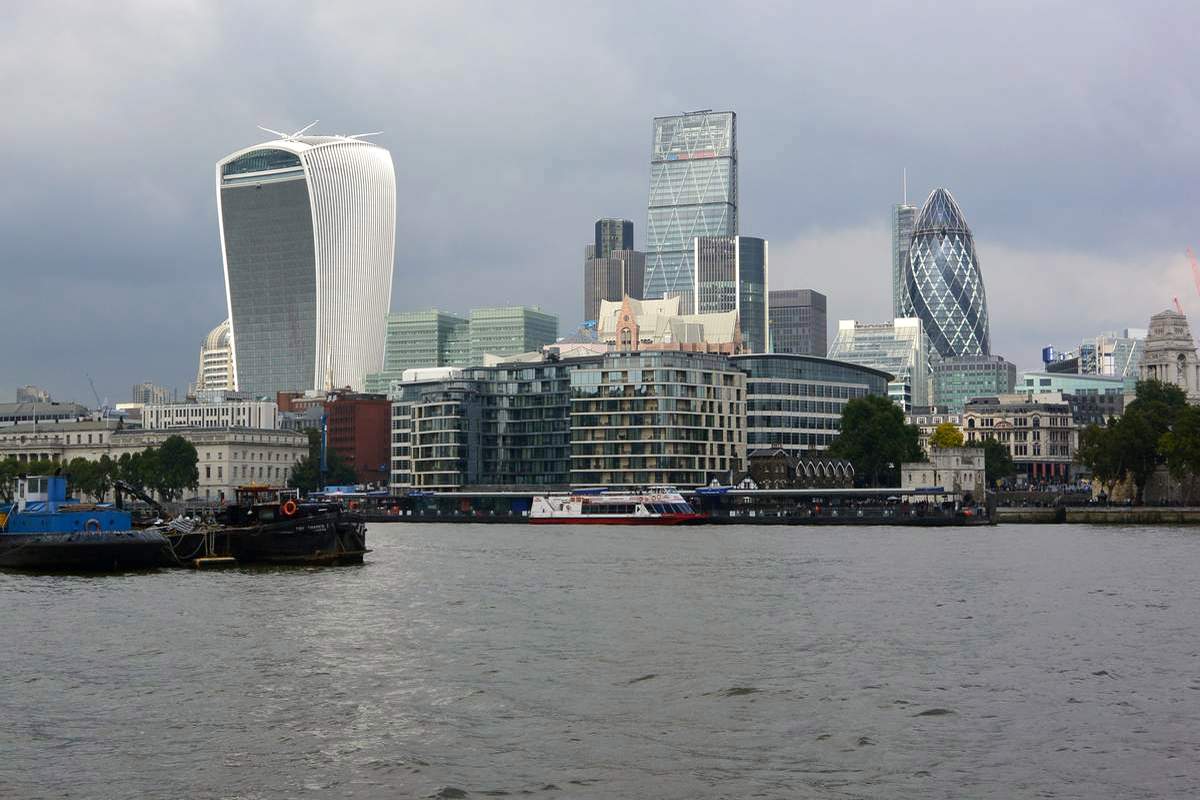 The Walkie-Talking building is on the left and The Gherkin on the far right along the Thames waterfront, London

England
September 7, 2015 1
*This site contains affiliate links. If you purchase through these links, we may receive a small commission at no extra cost to you.

There are two things scarce matched in the Universe – the Sun in Heaven and the Thames on Earth.

From the moment we touched down at Gatwick Airport on the outskirts of London, we were hit by the city’s electric energy, unexpected overall friendliness, and stunning architecture.  Our only experience in the UK up until our arrival had been brief layovers in London and Trav’s job interview in 2013, which left me with a rather sour impression of Cambridge.

As soon as we passed through the security exit into the main airport, we were met with a wonderful sight – Costa Coffee, purveyor of tasty espresso drinks in “normal” sizes.  After ordering the biggest mochas on the menu and ridiculously rich, gooey muffins, we beamed at each other in contentment at the sign behind their counter:

If your drink doesn’t make you happy, we’ll make you another.

We knew we were going to enjoy our visit!

After wandering aimlessly at the airport for a bit, we finally located an information desk for directions.

Showing the gentleman the address for our Airbnb where we’d be staying in central London, he fired a barrage of instructions at us, only to start over moments later with an even better route.  Confident he’d created the ideal route for us to reach our destination, he seemed quite oblivious of our incertitude.

Ultimately, he sold us train tickets to a stop in central London.  He then ushered us to the booth next door where we could buy Oyster cards, a pre-paid public transit card we could use on the buses and the Tube, the city’s underground metro.

We caught our train without difficulty, then walked to our Airbnb rental a few blocks away.

When we arrived, the owner, Kat, wasn’t available, but she had arranged for a friend to be there to welcome us and give us the keys.  Cheerful and efficient, he showed us to our room upstairs and returned to work downstairs.

Kat was out of town and we never did run into her roommate, so the entire split level flat was essentially ours for the next 3 days.  From our bedroom balcony, we had a view of the Shard, a 72-story glass office building that was beautifully lit at night.  It was so close to her flat that it would become our beacon for the next few days as we wandered around the city, following the twinkling lights of the Shard back each night.

We scoped out our new digs, then Travis took off for his interview at King’s College near our Airbnb.

When he returned a few hours later, we headed out to see a bit of London.  We first headed for the Thames River, just minutes on foot from our Airbnb.  There, the full magnitude of the London waterfront unfolded along both banks before us.

Everywhere we turned, we saw cool buildings with fantastic architecture.

It was surreal to finally see London’s Tower Bridge in person.

You know how sometimes you have an idea of what something will be like but then it’s disappointing once you finally experience it?  Travel brochures, agencies, and photographers rarely reveal that the monument you’ve come to visit is actually much smaller than it appears in photos, that a major freeway runs right behind your chosen natural attraction, or that you’ll be visiting the most beautiful beach in the world with 2.4 million other sunbathers.

Tower Bridge is actually bigger than I’d imagined, more beautiful bedecked in shades of blue and white, and it’s surrounded on all sides by equally stately sights vying for the eye’s sole gaze.

From our vantage on the bridge, we could see the Shard, City Hall, the HMS Belfast, a museum ship that’s now permanently docked on the Thames, and the imposing spires of the Tower of London where the ghost of Anne Boleyn haunts with  her head firmly clasped under her arm.

Oh yeah, the Tower of London was definitely on our list of sights to see during our stay!

We strolled along the opposite bank of the river, enjoying the beautiful evening with small pockets of other appreciative tourists.  I hadn’t realized how much I missed the electricity of being in a large city.  We were content to people watch, fascinated by the European style of clothing and marveling at the variety of people streaming around us.

Both exhausted, we finally started back to our cozy little flat tucked away on an obscure London side street.

Along the way, we paused where a large group of swing dancers was performing with enthusiasm in a public square along the Thames.  Their happiness was infectious.  Some of them were really good!

Sinking into cozy chairs surrounding the square, I rapidly warmed to the idea that Two Small Potatoes might actually be happy living there as we watched the dancers madly spinning beneath the L-O-N-D-O-N sign.

Hi! We're Carrie and Travis, Idaho potatoes transplanted to Switzerland and Germany for 8 years, now back in the PNW. Roll with us for Europe expat guides, plus travel tips for our favorite destinations, dreamy lodging, and outdoor adventures!