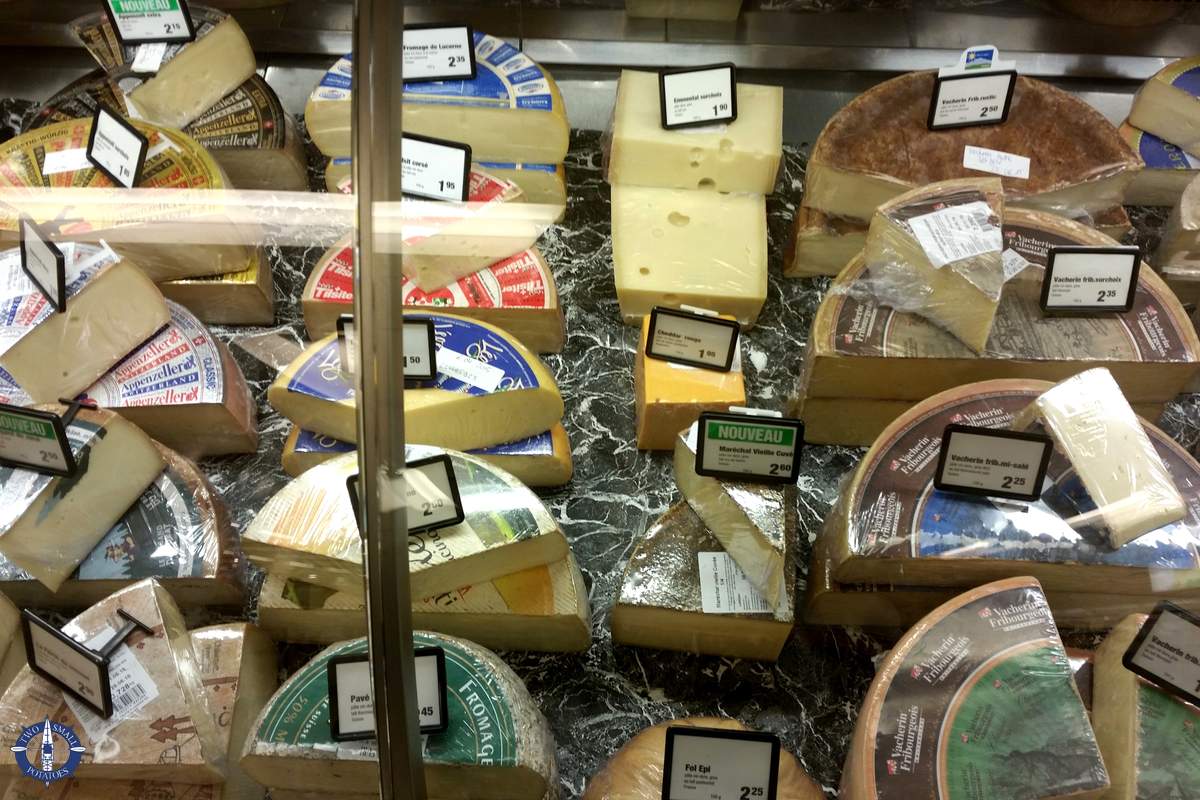 10 American Foods We Miss (That Europeans Think Are Weird)

Expat Life
July 20, 2015 4
*This site contains affiliate links. If you purchase through these links, we may receive a small commission at no extra cost to you. 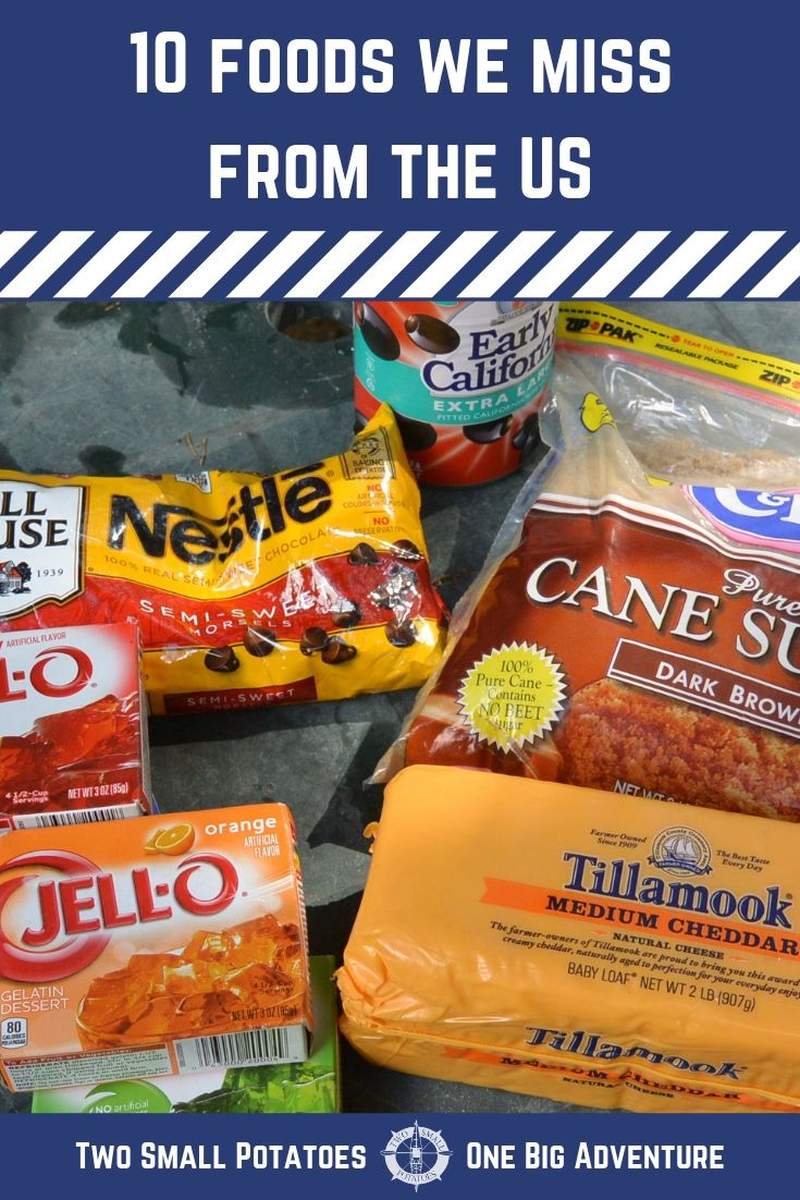 It’s just past the one-year anniversary of when we moved to Switzerland, so we’re taking a look at some of the foods we miss from the US. We miss entire food groups, especially really good Mexican food, but the ten American foods we miss most so far are either basic ingredients, staples, or “comfort foods” that are difficult to find or completely absent in Switzerland.

Are you an expat? What foods do you miss from back home that you can't find in your host country? These are the 10 American foods we miss most in Europe. Click to Tweet

I certainly didn’t expect cheddar to end up topping the list of things we miss, but we didn’t realize until we left the US just how uncommon it is in the vast realm of European cheeses.

After a recent trip to Migros, one of the biggest supermarkets in Switzerland, we finally found a block of cheddar at the deli and splurged for a tiny wedge. It’s sharper and drier than what we prefer and it doesn’t melt well, but we’ll keep buying it because it’s the only cheddar we’ve found.

We especially miss Tillamook or Bandon cheddar, made locally on the Oregon coast. It’s ohhh, so scrumptious. My absolute fav are their Tillamook Squeaky Cheese Curds, which actually squeak when you chew them.

Spear a couple of them and toast them in your campfire for the ultimate down-home delicacy.

Ok, so you probably wouldn’t think of chocolate chips when you think “American foods,” right? It’s not like they’re only made or even only sold in the US.

Apart from a bag of Hershey’s chocolate chips our friend Rana brought back from Lebanon and gave us, we’ve gone without for a year. I love to bake, so they easily make the list of foods we miss from the US.

How I miss you, sweet little morsels.

Did you know that when Nestlé wanted to add Ruth Wakefield’s recipe to their packages of Tollhouse chocolate chips in 1939, all she asked for in return was a lifetime supply of chocolate?

Asiago cheese bagels were my absolute favorite type of bagels from our local bakery in Oregon, but I miss bagels in general. Cranberry nut, cinnamon raison, jalapeño, garlic, blueberry – I love them all.

Options in the Switz are limited to unappetizing grocery store packages of two or four plain bagels, pale like the downy fluff of a sickly seagull. They’re not golden on the outside and pillowy on the inside with a slight crack when you bite them. It’s shameful.

Again, the irony is that we can’t even take credit for the holy yet humble bagel as one of our American foods. While the origin of the holy, humble bagel is contested, it likely either originate in Poland or Austria centuries ago. So why, then, are they so blasted hard to find in Europe??

Monday through Friday in the US, I used to toast a bagel for breakfast and eat it on the way to work.

Now I just have toast, the poor man’s bagel.

Switzerland has some pretty tasty pastries and desserts, but cheesecake is not one of them. It’s absent from the local bakeries, and the limited supermarket versions lack flavor, texture, and substance.

In other words, it’s not cheesecake. If it’s not packed with eggs, heavy cream, sugar, and cream cheese, don’t waste my time.

Folks outside Oregon might not know this, but the best cheesecake in the world is actually made at Sweet Life Patisserie in Eugene. If you pass through and don’t stop, you’re committing a crime.

And remember, “No bake” does not a cheesecake make.

Tater tots actually do exist in Switzerland, but I’m not sure they’re even made from real potatoes, which is ironic considering the US’s reputation for eating too much unhealthy, over-processed food (which we do).

With a slightly artificial flavor and a pasty texture that makes me think the ingredients have been blended before compacting them into tater tot blobs, we just won’t eat them. The outside should cook to a lovely golden brown and the inside should be actual chunks of potato, ideally with onions and peppers as well.

Do you want those tots cajunized?

Do one-legged ducks swim in circles?

Um, yes. Definitely one of our favorite American foods.

Another food we miss from the US is Miracle Whip. Like our favorite brand of onion tater tots (Ore Ida), this little jar of white gold is made by food giant, Kraft.

How to explain the flavor of Miracle Whip to someone who’s never had it?

Like mayo but with more flavor? Sweeter? Tangier? Tastier? Not gross?

Ok, maybe not that last one – to each his own.

But making pastrami sandwiches, deviled eggs, and potato salad is a bit sad without it. They actually market it in Germany as Miracel Whip, so next time we’re thataway, we’ll definitely pick some up because there’s none to be had in Switzerland.

I’ve whined about this before and I’ll whine again. Baking is tough without brown sugar.

While I’ve found something in Germany that calls itself “brown sugar,” it’s not at all the same. The taste is more or less like regular sugar (but brown), and it definitely doesn’t have the right texture when baked.

Some of my favorite American recipes will simply have to stay sandwiched between the dark folds of my cookbook until I get around to making our own brown sugar with real molasses.

Or perhaps we’ll find the real deal during our travels outside Switzerland!

Expat Wish: Switzerland, what do you have against importing a few of our favorite American foods?!

This might be a bit of a dark horse and I have to admit, I’m not sure I’ve ever made Jell-O in my life without adding alcohol, but when you need 200 Jell-O shots for a river float or backyard BBQ, suddenly you realize what a superb invention it was.

For less than 50 cents at WINCO in Oregon, you can buy a package of Jell-O, which is just a sweetened, flavored powder with gelatin in it. Add boiling water, stir, and pour into any mold, cup, or shape you want. After a few hours in the fridge, you have a tasty, cool, fruity summer snack.

Replace some of that water with rum or vodka (my preference), and you have magic, people.

For a fun and tasty snack to take to a BBQ, use orange and raspberry Jello-O, orange fruit, and flavored vodka. Whipped cream vodka is excellent with these. Cut oranges in half, hollow them out, pour in your liquid Jell-O, let solidify in the fridge, then cut the oranges in wedges and serve.

Ambrosia of the Gods!

In lieu of Jell-O brand, we tried making Jello-O shots in Switzerland with a powdered substitute, which didn’t set up at all with alcohol added. We also tried them with agar, which just had an unpleasant texture.

I wonder if Jell-O would send us a few packages if we wrote to them??

Wait, what? The land of chocolate and wine doesn’t have black olives?

Yes, of course they do. But they’re really not great.

We’ve tried about 10 different brands of black olives from all different stores, pit in and pit out, and they’re either so fatty they coat your mouth with lard or they taste like soap.

Perhaps the fermentation process of European olives adds a flavor that doesn’t appeal to us, or the oxidation process in California olives infuses scrumptiousness. I dunno, but this is one time two Idahoans give two solid thumbs up to our sunny neighbor to the south.

I can understand the scarcity of sarsaparilla, but it never occurred to me that root beer is possibly even more of a North American phenomenon until we moved to Europe.

We didn’t even drink it that often, but it easily makes the list of American foods we miss most.

You can’t have root beer floats without the root beer.

As a kid, I grew up with the best root beer available – my mom’s homemade brew. In the summer, she’d mix up a huge batch of the sweet, thick beverage. By huge, I mean her “mixer” was a brand new plastic garbage bin!

She would brew ingredients like sassafras, cherry flavoring, vanilla, licorice root, sugar, and yeast, then pour it into old-fashioned glass soda jars, using what is now an antique capper to firmly attach metal lids to each bottle. Then, we’d impatiently wait for weeks, periodically checking on the stacks of crated bottles outside, anxiously willing the little yeasties to do their job and ferment our favorite summer drink.

Every once in a while, a bottle would build up too much pressure and explode. Once it was ready, we’d put them in the fridge and have a nice supply of the best soda on earth.

I guess Switzerland doesn’t need to sell it; my mom just needs to send us a few cases!

I have no doubt that as soon as we leave Switzerland, I’ll be blogging the “10 Foods We Miss From Switzerland,” but for now, the next time you eat any of these things, think of us.

Let us be the reason you’re eating for two!

Are you new expats in Switzerland?

Type to search or hit ESC to close
See all results
wpDiscuz
4
0
Don't forget to leave a comment!x
()
x
| Reply
We use cookies to ensure that we give you the best experience on our website. If you continue to use this site we will assume that you are happy with it.OkNo thanks!Privacy policy