101 Reasons To Own A Rat Terrier

Expat Life
November 16, 2015 4
*This site contains affiliate links. If you purchase through these links, we may receive a small commission at no extra cost to you.

For those who haven’t met her, our adventurous little world-traveling rat terrier, Ratatouille, turns 6 years old today.  Or at least on a day close to today.   Since she’s a rescue from the Oregon Humane Society in Portland, we can’t be sure of her exact birthday, but we adopted our new bundle of canine joy on January 16th when she was eight weeks old. November 16th is just the day we chose for her “official” birthday.

Most of our friends and family have heard the story of how Touille joined our family.

For those who haven’t, Touille is the product of an irresponsible breeder in Tillamook, Oregon.  The lady was so overrun with dogs that she actually moved out of her house, leaving it – quite literally – to the dogs.  Recognizing that she was overwhelmed and couldn’t care for them, the breeder voluntarily surrendered nearly 100 rat terriers in order to avoid prosecution.  At the time, the plight of the dogs made local news as officials appealed to the public for donations to help care for them and for folks to consider adoption.

Like a chorus of angels, volunteers and veterinary staff from the Oregon Humane Society scooped up the dogs, caring for the emaciated and traumatized puppers until they were plump and waggly, eventually finding homes for all of them.

Ratatouille was one of the last of those dogs to be adopted.  We’ll forever be grateful to OHS for the work that they do because without them, Touille wouldn’t be a part of our family.

Despite her horrid death breath and persistent urge to introduce herself to strangers once eye contact is made, people seem to like her well enough.

Maybe it’s because she loves to give kisses.  Death breath kisses.

Maybe it’s because she’s so cute when she has puppy dreams and sleeps with her tongue hanging out.

It could be how cute her little butt is when she twerks while gnawing her cow hoof.

Or perhaps it’s because she resembles Gizmo from the movie Gremlins – the unfortunate result of an otherwise adorable creature turned monster simply by adding water.

Other dogs tend to like her.  Though she’s not big on sharing, she loves to snuggle.

Plus, since she’s cat-sized, cats love her.

And she loves them.

When Touille’s not lounging around the house like a diva, 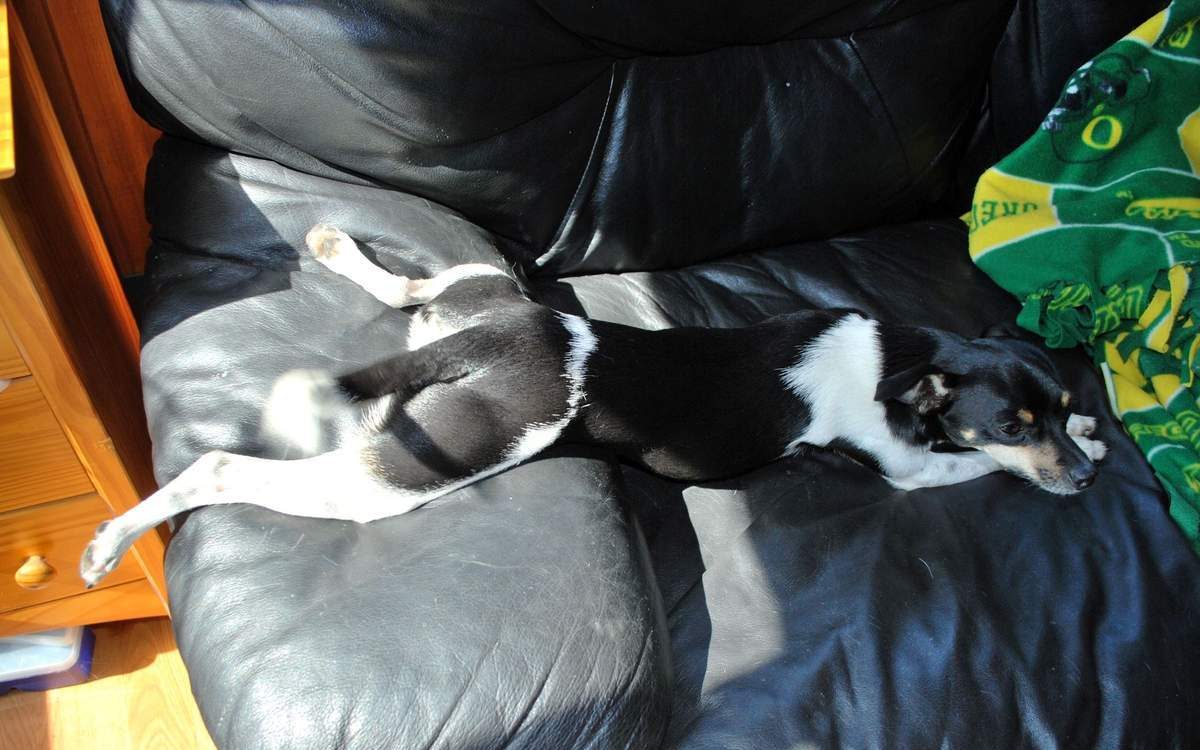 she makes herself useful by bringing things to us,

by foraging for food in the wild,

and by squirrel-proofing the back yard.

She protects us from infestations of stuffed hedgehogs.

And while it’s fine and dandy that she can “sit”, “roll over”, and “speak”, tricks any self-respecting rat terrier can do, her real skill is as kayak ballast.

It’s no surprise that in her mind, she’s the center of our universe.

The take-away message here is that an “only” rat terrier is clearly a spoiled rat terrier.

Never have just one.

Type to search or hit ESC to close
See all results
wpDiscuz
4
0
Don't forget to leave a comment!x
()
x
| Reply
We use cookies to ensure that we give you the best experience on our website. If you continue to use this site we will assume that you are happy with it.OkNo thanks!Privacy policy