Search
*This post may contain affiliate links. If you purchase through these links, we may receive a small commission at no extra cost to you. We only recommend companies we trust!

Despite waking up to a thick, murky ocean of fog lurking in our Swiss valley, we took off for a drive to get out of the house.  Randomly heading north toward Interlaken, Travis pulled off the highway onto an exit so we could check out a map.  Deciding to just continue on, the road ended up taking us to the little town of Lauterbrunnen with its famous Staubbach Falls, one of the highest in Europe at just under 300 meters.  With the spring weather and melting snows, we thought it would be a great time to hike to it, despite the persistent, odd mist obscuring the mountains.  We were heartened by flashes of blue sky, but they were quickly swallowed anew by the mist. 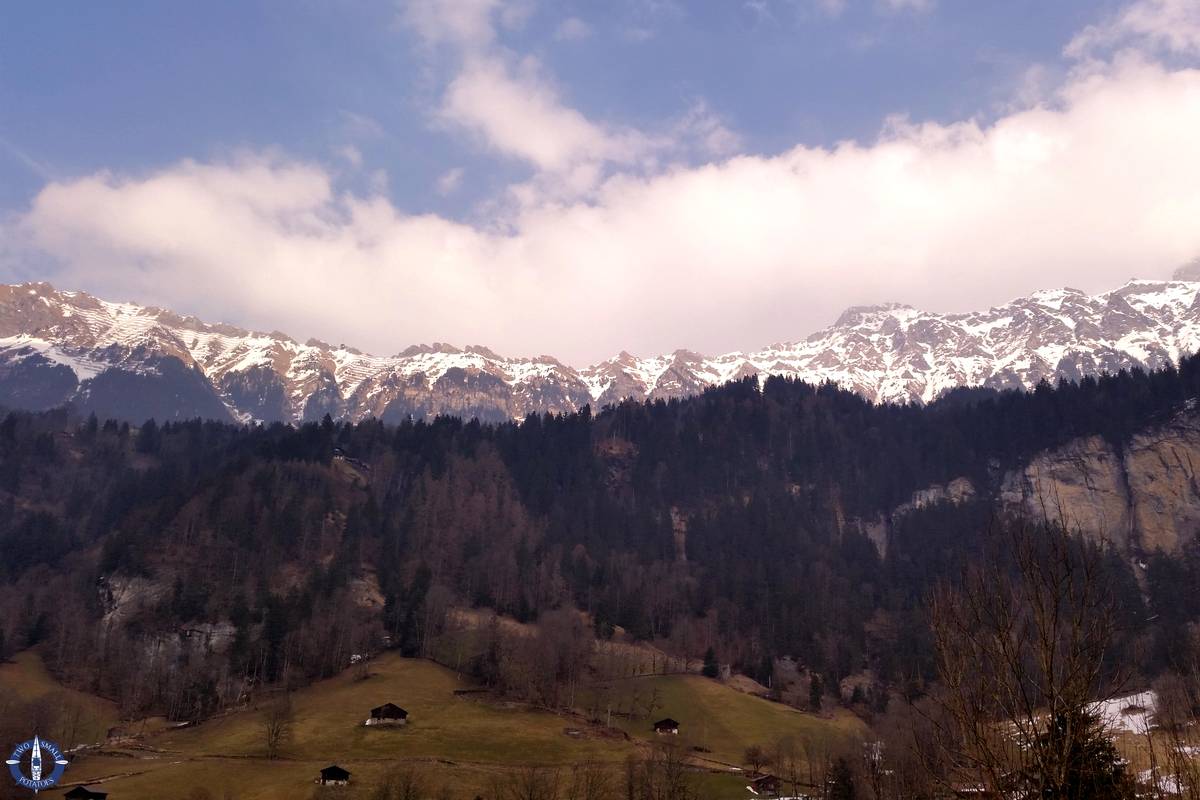 As it turned out, it was far too early in the year to visit the falls.  Though the snows had melted at lower elevations, it must have still been holding tight up high because the waterfall was but a mere trickle. 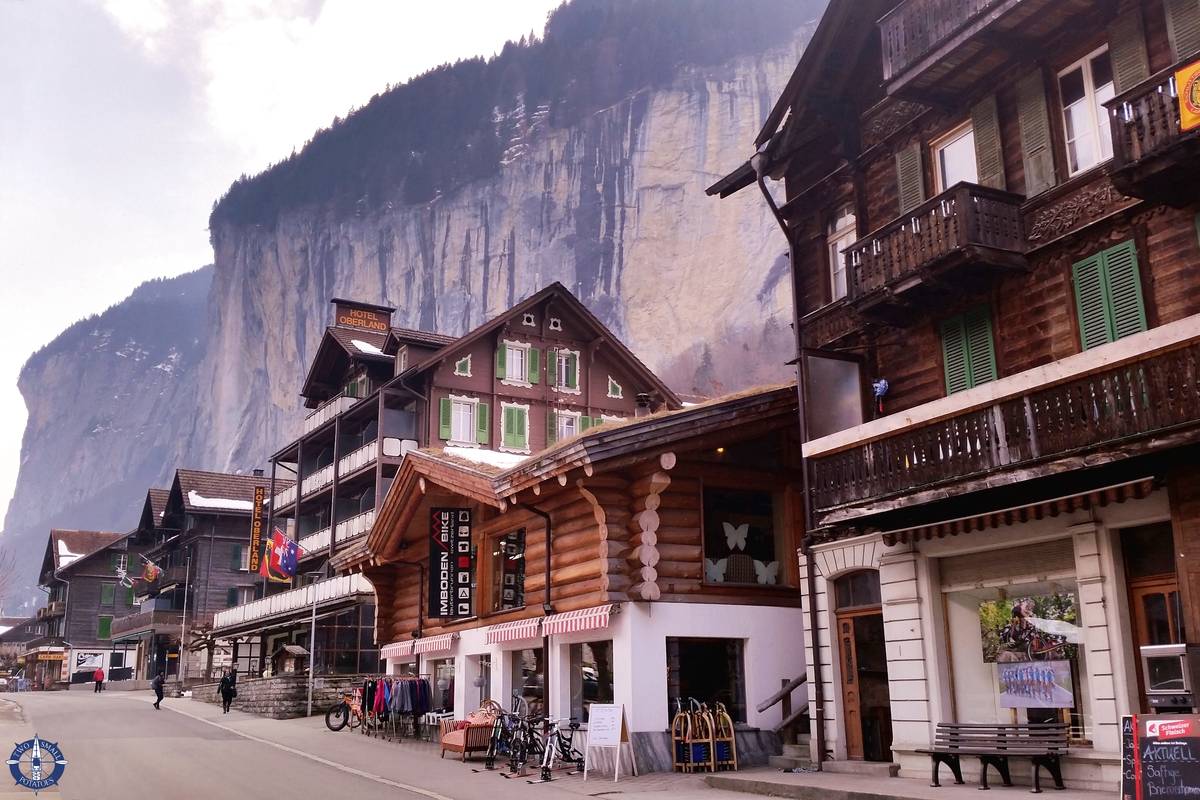 Barely a trickle, Staubbach Falls is barely visible as a slighter whiter spot against the rocks to the left in the photo.

We walked through town and back up past the falls, anticipating a hike up to the base of it along the trail.  We were again disappointed to find that the trail was closed for safety reasons due to debris being carried over the cliff above by the falls.  It was hardly the spectacular sight we’d seen on countless tourist sites and blogs before our visit. 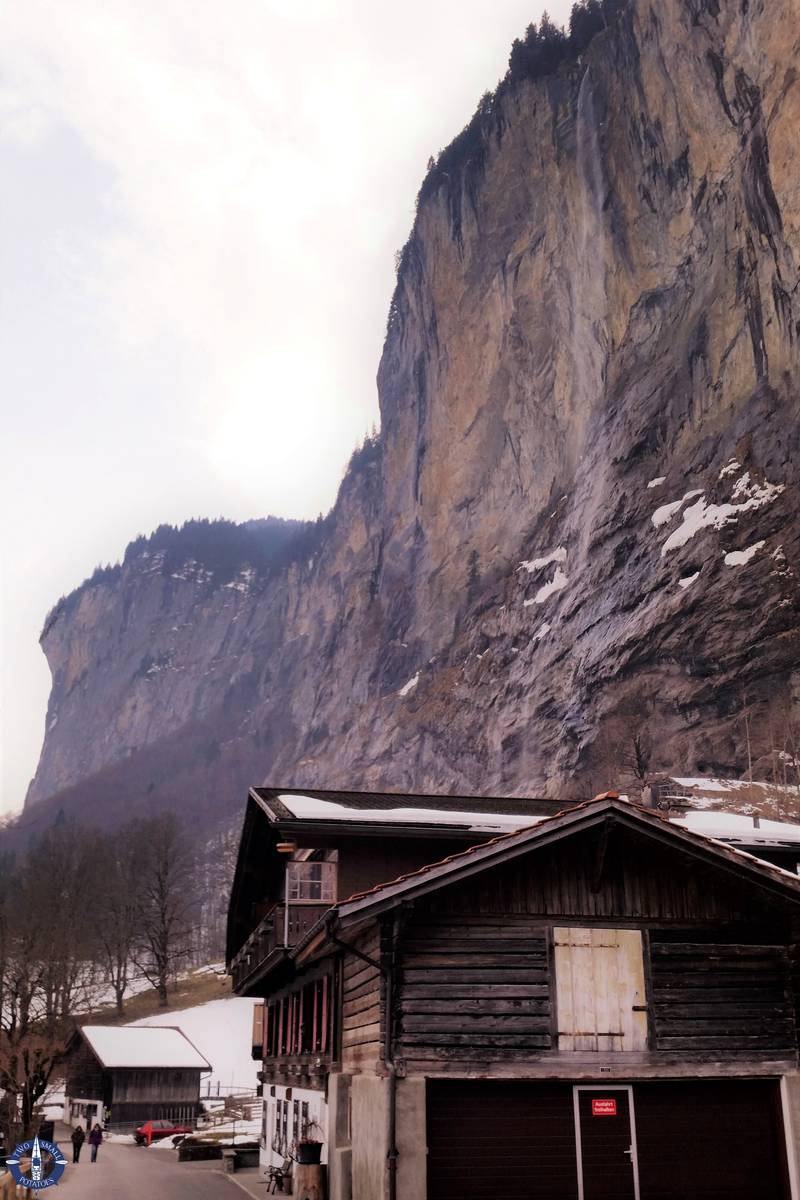 The thin trickle of Staubbach Falls is just barely visible in the shifting mist.

Despite our poor timing to see the falls, we were still impressed with the town itself and with the massive, sheer mountain cliffs pressing down on all sides. 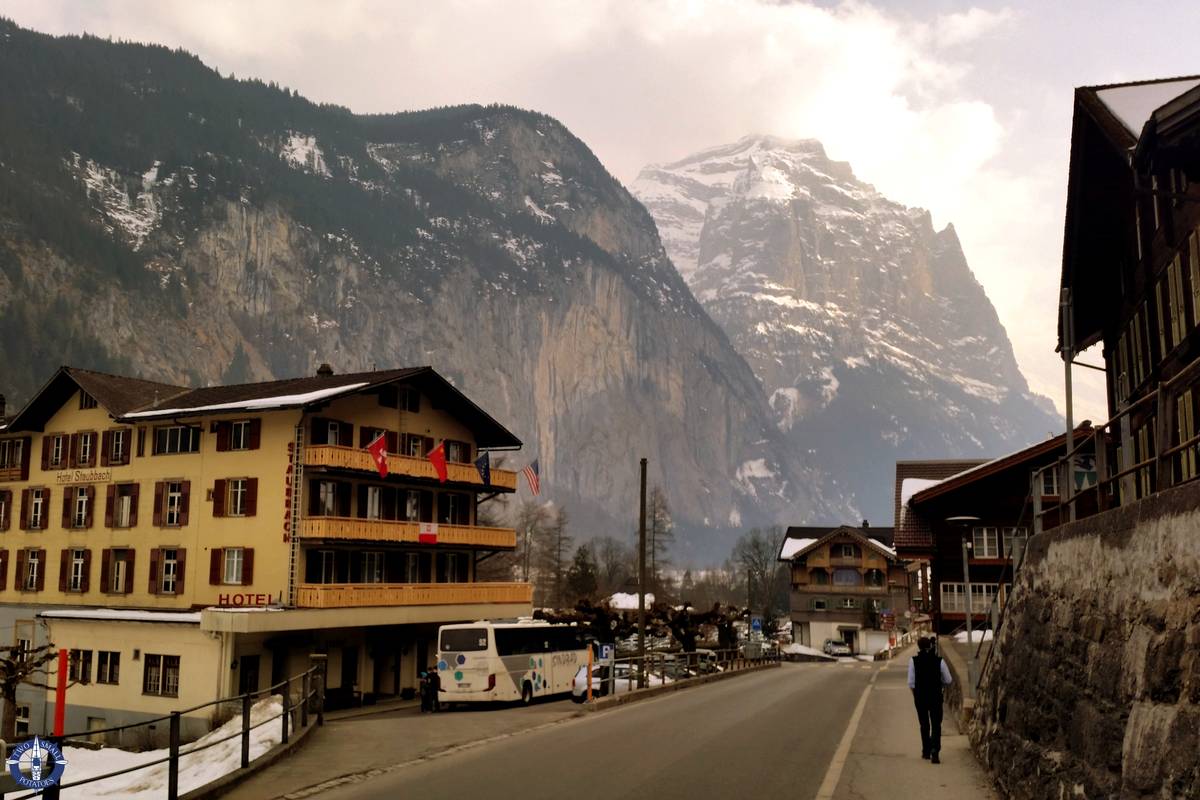 The town of Staubbach is charming, even in poor weather.

The most impressive views were looking south/southeast toward the peaks of Jungfrau, Mönch, and Breithorn.  This valley, Lauterbrunnen, which means “many fountains” and is known for its stunning series of 72 waterfalls, is definitely one we’ll be coming back to hike later in the year. 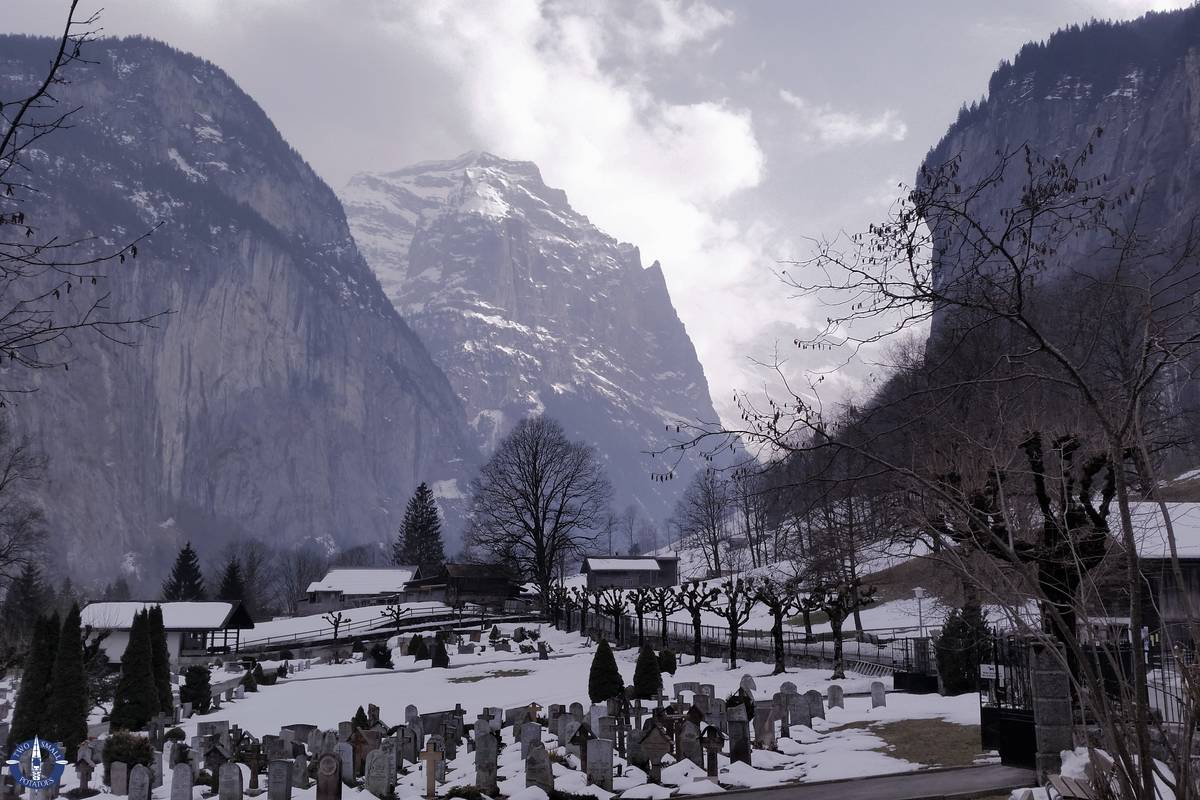 Leaving the little community of Lauterbrunnen, we drove north, back the way we had come, but turned east when we saw a sign for Grindelwald, another beautiful mountain town we wanted to investigate.  We spent the rest of the evening walking around town with Touille, gawking at the spectacular scenery, and briefly chatting with a friend we ran into who was there for a skiing weekend. 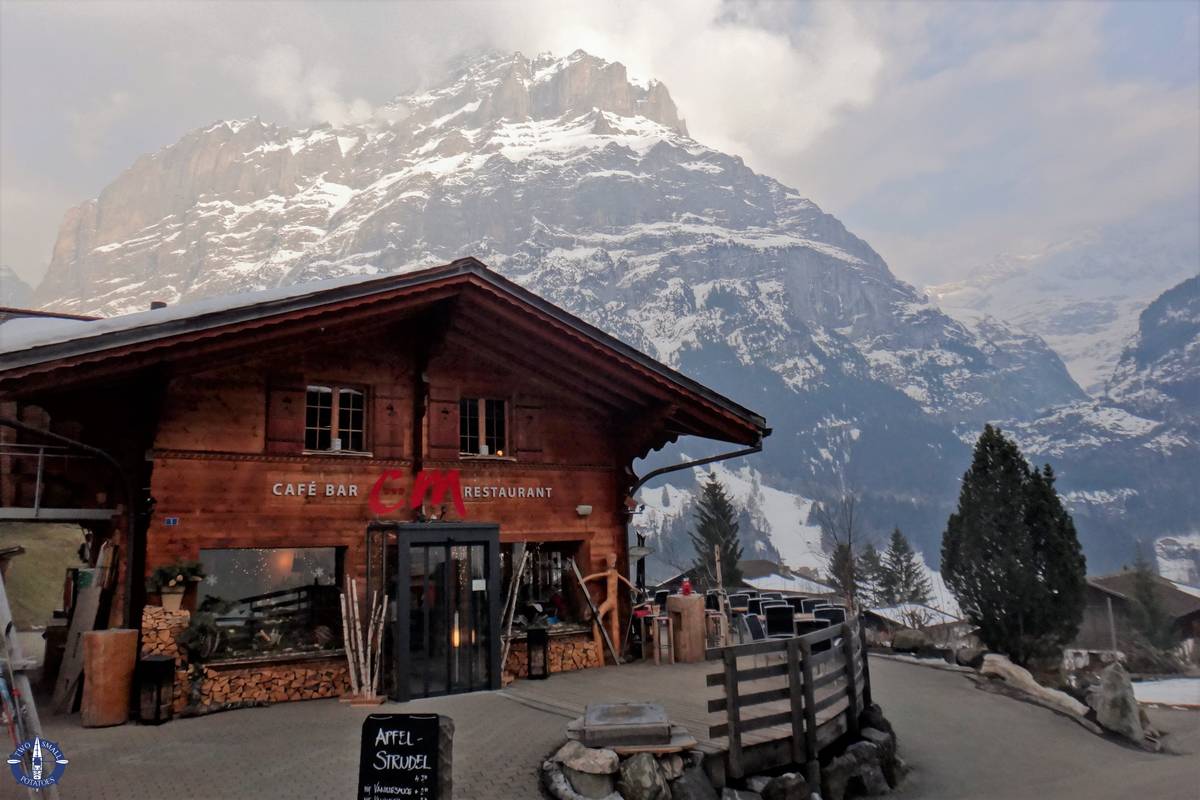 Grindelwald in the Lauterbrunnen Valley, Switzerland

As it grew dark, we neared the end of our road, which dead-ended at a secluded hilltop hotel beneath the towering peaks. 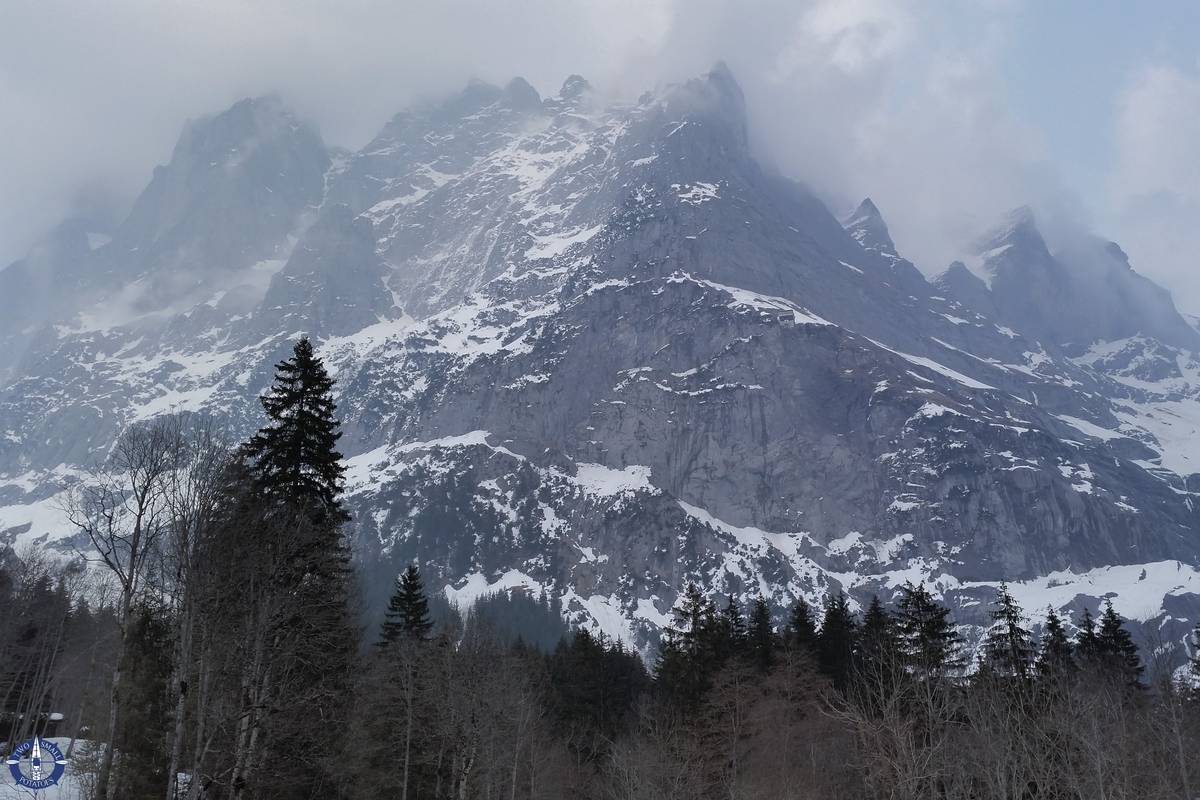 What’s most impressive about this photo is that barely visible in the near center is a tiny insignificant hut perched on the rock face.

We threw the ball for Touille for a bit in the fading light, popped into the restaurant for coffee, then bade the beautiful, rugged mountains of Grindelwald farewell.

This site uses Akismet to reduce spam. Learn how your comment data is processed.

"World's #1 Writer," according to Mom!
Carrie and Travis are ex-potatoes from Idaho transplanted to Germany. We share the best travel destinations, outdoor adventures, and dreamy places to sleep - all while figuring out this crazy thing they call “expat life.” Let us show you how to experience Europe like a local!
#TatersTravels #rollwithus

wpDiscuz
0
0
Don't forget to leave a comment!x
()
x
| Reply
We use cookies to ensure that we give you the best experience on our website. If you continue to use this site we will assume that you are happy with it.Got it!