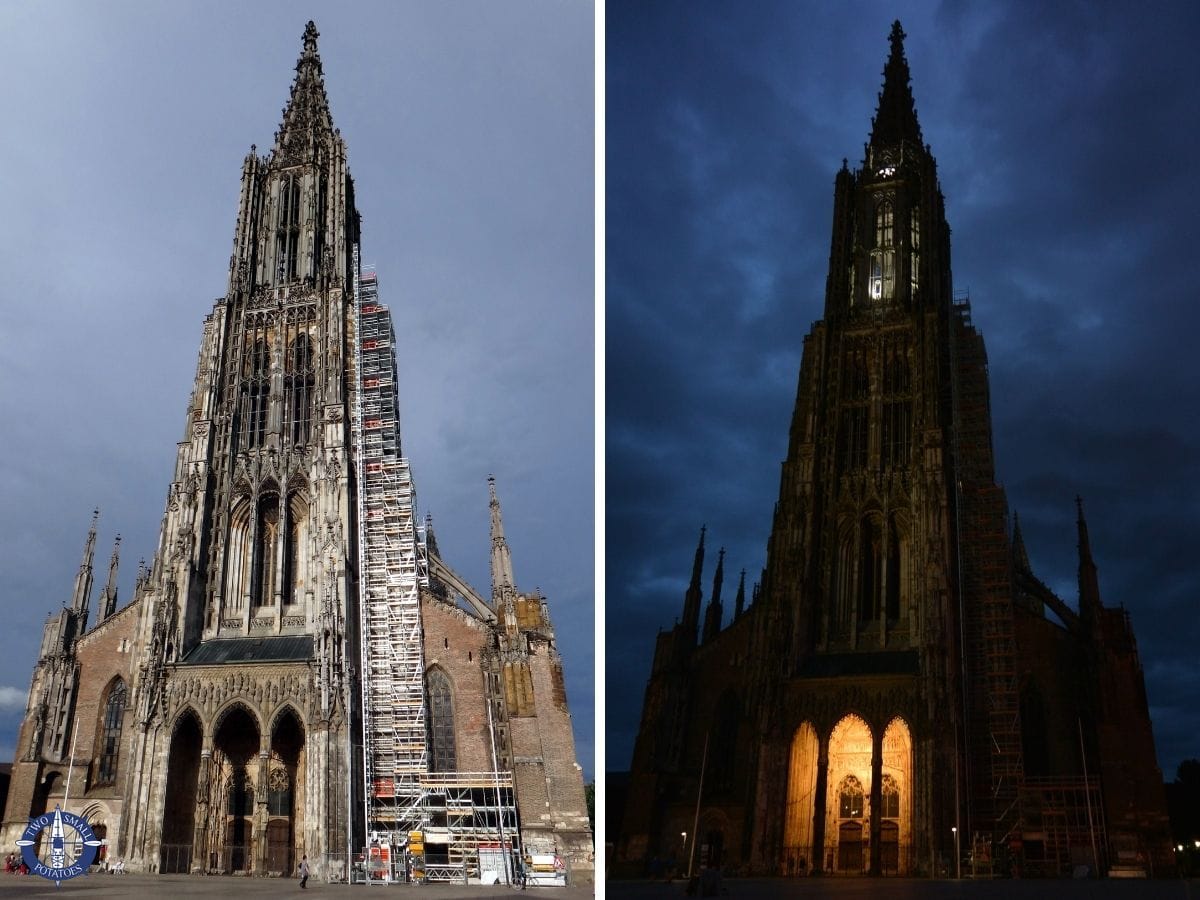 Germany’s Ulm Minster, The Tallest Church In The World 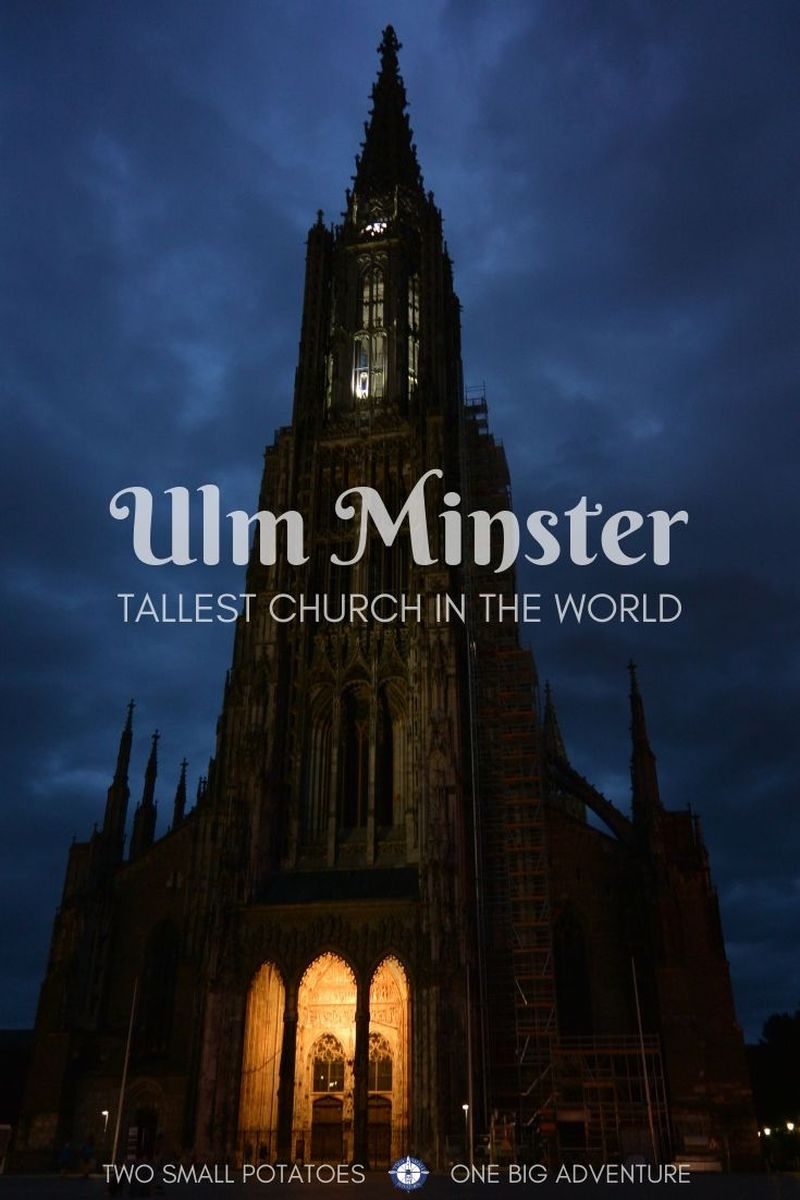 Like many college towns, the city of Ulm, Germany is a happenin’ place that belies its rather modest size of 120,000 residents. Unlike any other college town though, it can boast of being famous for two things. It’s the birthplace of Albert Einstein, and it’s home to Ulm Minster, the tallest church in the world.

Though we don’t necessarily jump on board the superlative train, sometimes they’re actually worthy of taking note. The Ulm Minster is one church you don’t want to miss while in Germany. In fact, of all the stunning churches, basilicas, cathedrals, and minsters we’ve seen in Germany, Ulm Minster is my personal favorite.

Topping out at 161.5 meters (530 ft), Germany's Ulm Minster is taller than the Great Pyramid of Giza and more than twice as tall as the Taj Mahal. Click to Tweet

Where is Ulm Minster?

Ulm Minster is located in the Münsterplatz – the pedestrian-only historic part – of the city of Ulm in the state of Baden-Württemberg.

It’s in southern Germany, just 1.5 hours by car from Munich, 3 hours from Frankfurt, and 2.5 hours from Zurich, Switzerland.

The church is accessible by car or public transportation from any major city in Germany.

Our Road Trip to Ulm, Germany

When two friends of ours from Trav’s grad school days came to visit another American friend living in Ulm, we knew it was time for a road trip.

Looking forward to the relatively short drive (Ulm is only about four hours northeast of where we live in Switzerland), we loaded up our camping gear, our dog, and hit the road for Germany.

Click on icon in upper right corner to enlarge map

After arriving at Helen’s apartment in Ulm, we eagerly soaked up giant North American sized hugs from all three. We caught up on gossip and news, jobs and what it’s like living as expats in Switzerland (for us), Canada (for Michael and Alanna), and Germany (for Helen).

Helen, who’s been in Ulm for some time and knows the city well, was gracious enough to not only invite us to crash at her place for the night, dog and all, but she enthusiastically offered to show us around town as well.

Now here’s the thing. The interior of Ulm Minster is, well – pretty. But will it make your jaw drop?

I dunno. Maybe. It depends on how many European churches you’ve seen. The more you’ve seen, the less likely you’ll be blown away by the Ulm Minster interior.

Noteworthy items include the wooden pews and choir stalls carved by renowned German sculptor, Jörg Syrlin. The Ulm Minster organ was also once the largest organ in the world and was played by Amadeus Mozart in 1763.

But who comes to the tallest Gothic cathedral with the highest church tower in the world to see old pews and a chonky organ??

You came to CLIMB the tallest church in the world, right?

It’s certainly why we were there, so after spending some time exploring the main floor, we bought tickets for the tower and started our long, slow climb.

Travel Tip: Ulm Minster is free to enter, but it costs €5 to climb to the top. Audio guides are available in English and German.

Before you spend your hard-earned €5 to buy a tower ticket, you should know what you’re in for.

The entire climb covers three separate sections of spiral stairs, each getting progressively smaller. By the time you reach the top, you’ll have puffed and squeezed your way up 768 slippery stone steps.

There’s no shame in not climbing all the way to the top though. Especially if you have heart or knee problems, vertigo, or suffer from claustrophobia, it’s still worth the fee to just climb as far as the bell tower.

The bell tower is exactly what you’d imagine – a room in the main steeple where the Ulm Minster bells are.

There, you can walk around an exterior catwalk, see (and hear!) the huge church bells up close, and visit a mini museum of sorts with interesting historical artifacts in a large room just off the walkway.

When construction began on Ulm Minster in 1377, it was originally a Roman Catholic church. As the Reformation swept through Europe in the 16th century, the people of Ulm converted to Protestantism, and the minster became a Lutheran church.

By the time they converted in 1530, most of the building had been completed, with the exception of the spires. Economic stagnation followed shortly after that and in 1543, work abruptly stopped. After a lengthy hiatus, Ulmer Muenster was finally completed in 1890.

Because the architectural plans had changed over the centuries, the main steeple was 10 meters taller than the original medieval Gothic plans.

Turns out it’s a good thing they waited to finish it!

While browsing the various items in the mini museum, a church employee joined us in the bell tower. We started chatting, and he welcomed us into another, smaller side room.

Friendly and knowledgeable, he pointed out particularly interesting objects, such as a cannonball on display.

The cannonball in the bell tower was fired by Napoleon’s troops at the minster during a battle in the early 1800s.

Is Ulmer Muenster a cathedral?

Launching into a discussion about terminology, he explained that Ulm Munster is not “Ulm Cathedral,” though it’s often referred to as such. The terms cathedral, church, and minster aren’t all interchangeable.

This was news to all of us.

I had never even thought about it, but by definition, a cathedral is the main church for a diocese with a bishop presiding over his diocese, or parishes. Ulm Minster has never had a bishop, so it’s not a cathedral.

While that makes sense, the debate about whether a site is a church or a minster gets a whole lot murkier, so I’ll leave that for the linguists. It’s all the same to me.

Atheism is a non-prophet organization.

See the ringing of the bells!

Next, the church employee showed us the buttons for ringing the bells.

Yup. They were mechanized in 1953 and are no longer rung by hand.

Ten of Ulm Minster’s original thirteen bells are still in use.

When he asked if we’d like to see the bells themselves, we eagerly responded with a chorus of “Yes! Yes! Yes!“

He led us back downstairs to the bell room, which had been locked when we passed it on the way up. Producing a ring of heavy metal keys like a medieval jailer, he unlocked the door.

Entering the room quietly, we filed past the long row of somber bells, silent in their pendulous slumber.

My immediate favorite was the Gloriosa, if for no other reason than her name.

It definitely has a prettier ring to it than the German for glorious: Herrlich.

Weighing in at nearly 5,000 kg (over 11,000 lbs), she’s the heftiest of the bells and has the prettiest name, though she’s also one of the plainest.

When the employee warned us that one of the bells was going to sound, we waited in anticipation. Prepared to not be startled, I still jumped when the Gloriousa clanged loudly right in front of us.

Travel Tip: Technically, dogs are not allowed on the tower climb in Ulm Minster.

Once we’d visited the bell room, we were enjoying the company of the minster’s friendly and engaging employee so much that we ended up following him on a personalized tour all the way to the top!

I wouldn’t have thought it possible, but the staircase of the third gallery is even narrower than the stairs below.

When we did, it became an acrobatic challenge – a three-step process of wrapping your arms around the central spiral in an intimate embrace, standing on tiptoe with one foot, and hanging the other foot and the rest of your body out over empty space while passersby inched past along the outer wall.

Claustrophobic? Scared of heights? Then this is definitely a great place to practice overcoming your fears.

After dragging ourselves up all 768 steps, polished smooth and soap-slippery from millions of foot steps, we finally reached the top of the minster.

The total height of Ulm Minster is 161.5 meters, and the viewing platform and highest point for visitors is at 143 meters. Click to Tweet

On a clear day, the Alps are even visible.

Pointing out areas of newer construction in town, our “tour guide” told us about a single day during WWII that devastated Ulm.

On December 17th 1944, 330 Allied planes dropped nearly 1500 tons of bombs on the city, reducing it to rubble. In less than 30 minutes, over 80% of the city center was destroyed, hundreds were killed, and thousands were left without homes.

The railroad tracks west of the minster were a primary target, so most of the houses between the church and the tracks were destroyed, as were entire neighborhoods north of the minster.

Every year on December 17th at 7:15 pm, the Gloriosa rings through the city for 15 minutes as a reminder of that horrible night.

Turning to the south, it was a relief when the discussion turned to a lighter topic: Fisherman’s Quarter along the Danube. As early as the year 854, craftsmen such as fishermen, leather artisans, and shipbuilders lived in this quarter, which at the time was the heart of medieval Ulm.

Now home to upscale restaurants and galleries, it would be our next stop after the minster.

Thanking our unofficial tour guide before parting ways, we descended the tower stairs, arriving at the bottom in considerably less time than it’d taken us to reach the top.

Other Attractions Not to Miss in Ulm

If you have some more time after visiting Ulm Minster, the city offers several other sites not to miss while you’re in town.

Make sure to walk the short distance to Fisherman’s Quarter, where you can catch a glimpse of the famous Schiefes Haus – the “Most Crooked Hotel in the World,” according to the Guinness Book of Records.

Unfortunately, a gate blocks the best views of it over the river Blau, where the entire house is so crooked it appears to be slanting into the river. To see it up close and personal, you’ll just have to book a night in the hotel!

Even if you don’t see the hotel, the Fisherman’s Quarter is unbelievably charming. You can spend hours wandering the narrow streets, admiring the architecture and dreaming about life along the cobblestone-lined canals.

Plus, the area offers an abundance of cafes and restaurants, perfect for a snack and a break from sight-seeing.

We certainly took advantage of the variety of dining options.

Meeting up with Helen’s boyfriend, the six of us had dinner at an Italian restaurant in the Fisherman’s Quarter. Splurging because of the “normal” prices, Travis and I both ordered the largest pizzas they had, plus drinks!

We never do that.

Oh Switzerland, you’re amazing in so many ways, but how you hurt our pocketbooks…

One last sight not to miss is seeing Ulm Minster at night.

It’s best to visit before it’s completely dark but past dusk when the sky still has some light to it.

Travel Tip: Make sure to swing past Ulm Minster at night as well, when it’s reflected beautifully in the Danube.

We were grateful we had the chance to visit Ulm while our friend Helen is living in Germany.

Huge thanks to her for sharing her beautiful city and its sights with us, especially the spectacular Ulm Minster – the tallest church in the world.

We hope you enjoy it as much as we did on your own trip to Ulm, Germany!

Don’t miss these other beautiful churches in Europe.