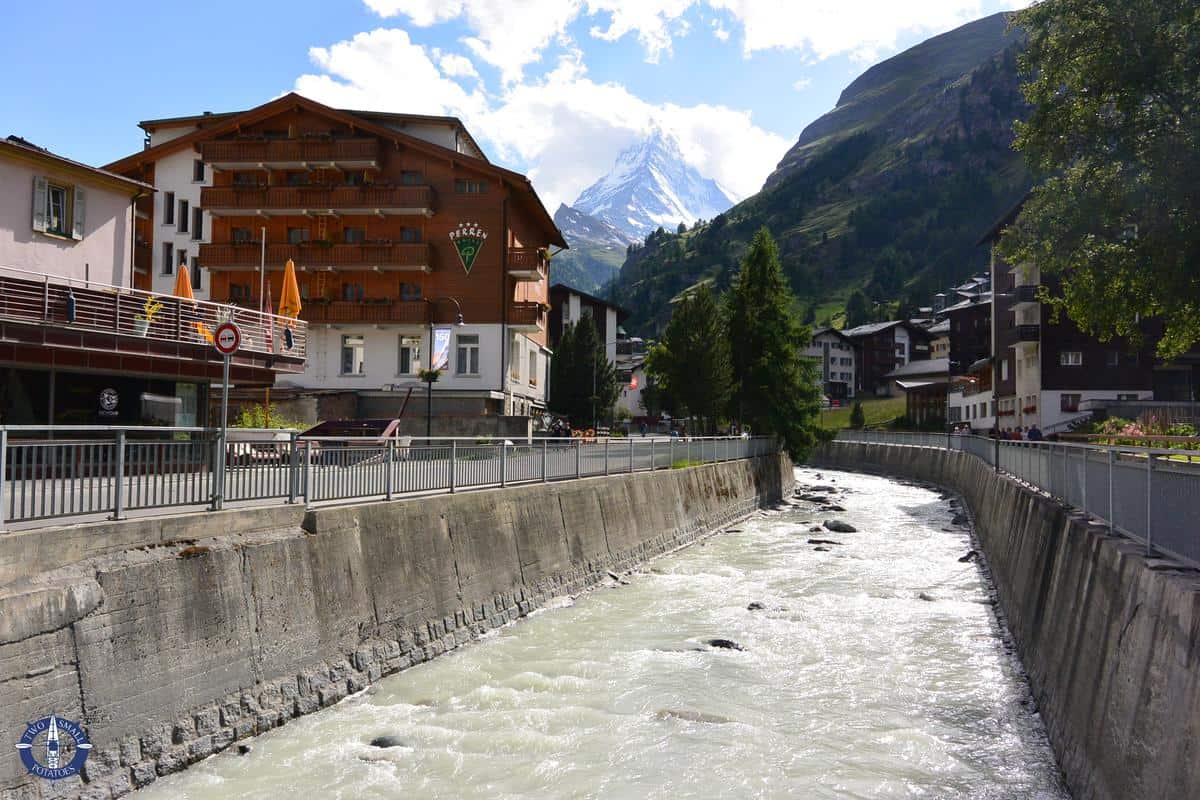 Zermatt, Gateway to the Matterhorn

Switzerland
June 27, 2015 0
*This post may contain affiliate links. If you purchase through these links, we may receive a small commission at no extra cost to you. We only recommend companies we trust!

Even though the town of Zermatt is super touristy, it would be a shame to overlook it on a trip to Switzerland, especially if you want to see one of the most famous peaks in the world – the Matterhorn. In fact, it would actually be rather difficult not to visit Zermatt when visiting the Matterhorn.  The town is the gateway to the Matterhorn, the primary departure point with multiple cable cars giving easy access to incredible hiking trails, climbing routes, and the ever-present chalets in the Swiss Alps.

During our 3-day visit to the area, we definitely wanted to do some hiking and camping near the Matterhorn.  But first we wanted to spend a day exploring Zermatt.

Like the town of Bettmeralp that we visited before hiking Aletsch Glacier, Zermatt is a car-free town.  This doesn’t actually mean that they don’t have any cars in town, because they do – and vans, heavy work trucks, and public buses which are electric.  Car-free really just means that visitors aren’t allowed to drive their personal vehicles into town.

Why would you even want to when you can tour town in a charming horse-drawn carriage?

Most folks who are traveling by car to Zermatt drive as far as Täsch, a tiny village about a kilometer north that seems to exist solely to provide parking and overnight accommodations for visitors to Zermatt.  You’ll have no shortage of options for parking garages and lots.

Arriving in Täsch, we opted to leave our car at Parkhaus Zermatt, a huge parking structure with a 2000+ car capacity.  From Täsch, you have to take a train the rest of the way to Zermatt, so we parked and headed downstairs to buy train tickets in the same building.  Though other parking garages in town might be cheaper, we were lazy and paid for the convenience of parking right at the train station.

When we returned to our car 3 days later, I was so tired I didn’t even care that we ended up paying 31 chf for parking.  I was just glad we could get off the train and not have to walk any further!

After waiting for just a few minutes on the platform, Travis and Touille immediately settled in to nap through our 20 minute ride from Täsch to Zermatt.  While they slept, I admired the stunning mountain slopes rising steeply on both sides of the train tracks.

up with Christine, a Swiss gal we’d met while hiking near the cute little town of Avenches a few weeks back.

She messaged us directions to a cute little place called Grizzly’s Bar & Bistro, and we met her there.

Though we’d only met Christine one time, we immediately fell back into comfortable conversation like old friends. She introduced us to Scott, a fellow American she’d known only as an Instagram friend until meeting him that very day in person.  Liking him immediately, we chatted about photography, Switzerland, and travel over a round of drinks.

Since I’m not a big fan of beer, I ordered a glass of panaché – a light beer mixed with 7-Up.

Despite the unlikely pairing, it’s surprisingly refreshing when served in a chilled glass on a hot summer day.   If you spend much time in Switzerland, you’ll quickly realize how popular the drink is.

The only downside to having such a good time is that you tend to lose track of time. We ended up having so much fun over drinks that Trav and I missed the last tram of the day from Zermatt to Sunnegga, where we’d planned to start hiking.

The night was still young – it was only 6 pm – so we meandered through town toward the trail entrance that would take us to Sunnegga.  We had our tent and camping gear.  We figured we’d just pitch our tent somewhere up in the mountains if we found a good place to camp or when we got tired.

With no schedule, we ended up exploring Zermatt for the next several hours.  I was especially excited to see someone with a Saint Bernard strolling through the streets.  You can’t get much more Swiss than that!

Stay at a 5-Star Hotel

The pedestrian-only streets of Zermatt are a mecca for shoppers.  Passing one gorgeous hotel after another, countless restaurants, and expensive shops peddling name-brand hiking and climbing gear, the town’s mountaineering history is readily apparent.

Those looking for “only the best” have a few options in town for 5-star hotels.  One of them is the Grand Hotel Zermatterhof.  The hotel has views of the Matterhorn and dispatches guests to and from the train station by private horse-drawn carriage.

Though we’re not particularly into rock climbing, I wanted to visit the Mountaineer’s Cemetery commemorating the region’s long history of alpine climbing.  The quiet little cemetery is nestled in the shadow of the Parish Church of St. Mauritius, both of which are along the way to the trail-head to Sunnegga.

Despite the bustle of tourism throughout the rest of town, I was surprised that we were the only visitors to the cemetery.

We walked up and down the aisles of gravestones, personalized plaques, and potted flowers, pausing frequently to reflect on how many of the engravings bore messages affirming an adventurous life well lived rather than one cut short by tragedy.

Roughly 500 climbers have died attempting to summit not just the Matterhorn but the surrounding peaks: Breithorn, Täschhorn, Monte Rosa, Weisshorn, and so many more.

We discovered the simple memorial stone for the four climbers who died tragically and a bit mysteriously in Edward Whymper’s first successful ascent of the Matterhorn in 1865.  Seven climbers reached the summit, but on the descent, inexperienced climber Douglas Hadow slipped, tragically pulling three other climbers – Croz, Douglas, and Hudson – to their deaths.  The three surviving climbers were tethered to the four who fell but were spared when the rope between them snapped, saving them from the same fate as their fellow climbers.  Afterwards, the surviving climbers were accused of cutting the rope to save themselves, though they were cleared of wrongdoing in the subsequent inquest.

For me, the most poignant of all the memorials was the one belonging to Donald Stephen Williams, a climber from New York who died on Breithorn.  He was only 17 years old, just a kid.  Adorned with a small American flag and his own red climbing ax, his epitaph reads, “I Chose To Climb.”

Long after we’d left the Mountaineer’s Cemetery and started up the trail toward Sunnegga, I found myself thinking about the cadre of young men and women who had died pursuing a brief moment of triumph atop one of Switzerland’s most unforgiving peaks.  Though I may never understand what prompts some to strive to conquer nature’s most challenging obstacles at the risk of death, I admire and envy their single-minded drive, self-discipline, and unwavering conviction that the risks they take are worth it to live a live without regret.

Wondering what else to do in the area?  Hikers and backpackers are sure to love two of the most scenic hikes – the Hörnlihütte Matterhorn trail and the 5-Seenweg (Five Lakes) hike.