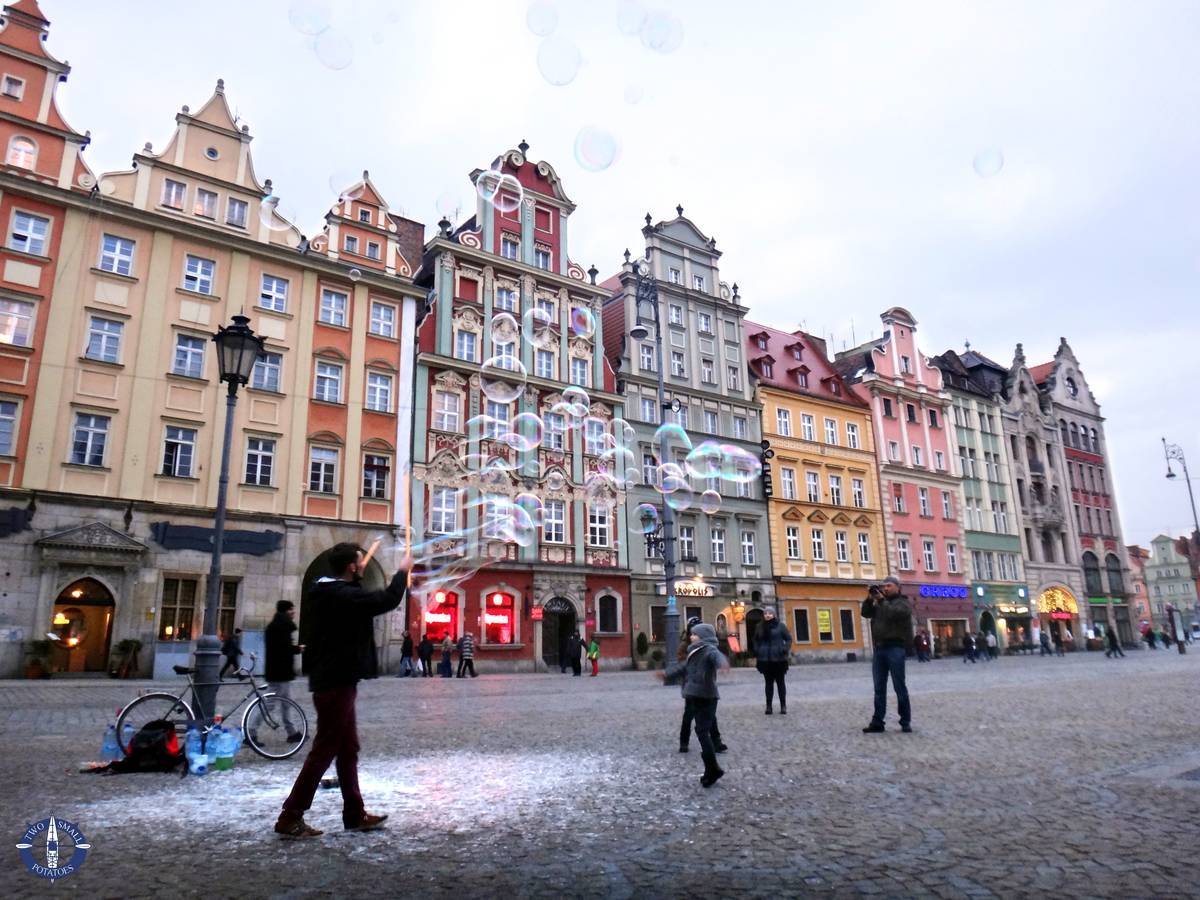 Wroclaw Gnomenclature: 6 Best Things to Do in Wroclaw, Poland 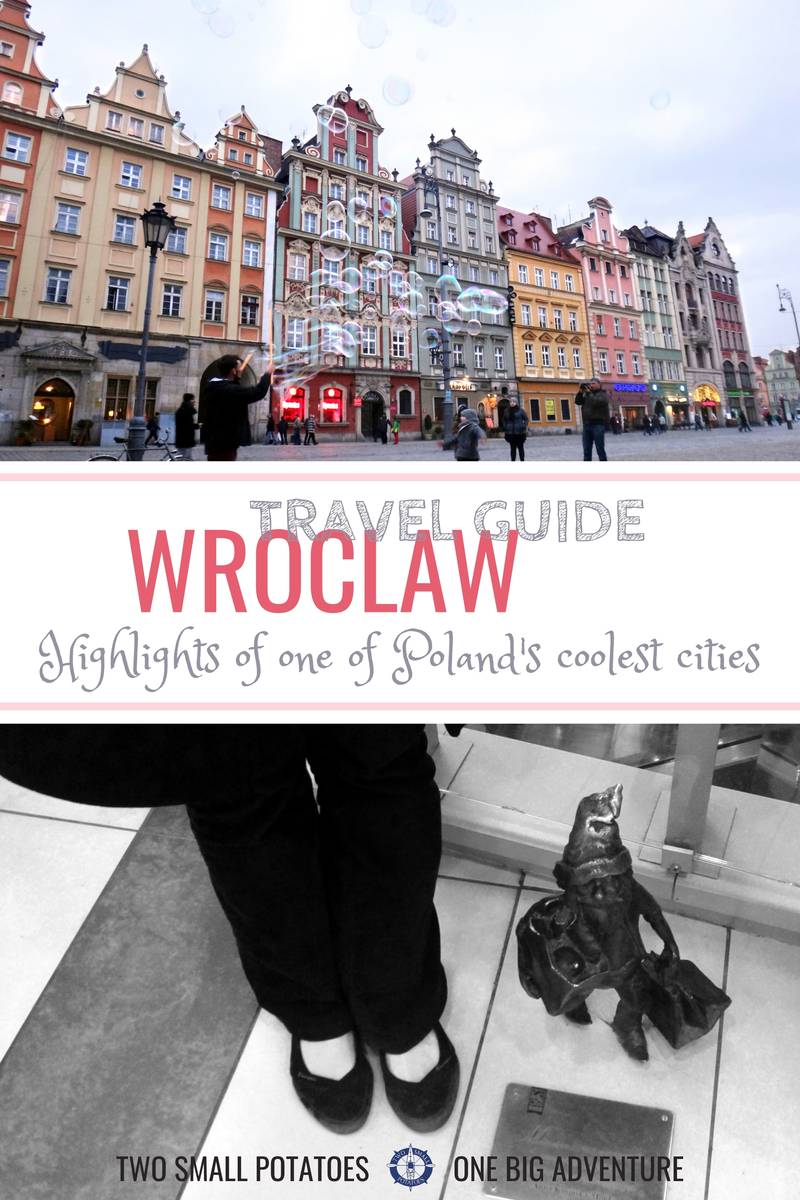 During a recent road trip from Swtizerland, a friend and her family offered to show me the highlights of Wroclaw, Poland. Boasting a population of over a half million, the city is the largest in western Poland. With its fascinating mixture of architecture, classy downtown shopping district, and low European prices, it’s not a surprise that Wroclaw is increasingly popular with tourists. It has even been nominated as the European Capital of Culture for 2016. After two partial days of exploration, I can’t say enough about this charming Eastern European city. Don’t miss these six highlights during your visit. They’re definitely some of the best things to do in Wroclaw.

Language Tip: Knowing the Wroclaw pronunciation will help you blend in with the locals. Phonetically it sounds like VROT-swaf with the accent on the first syllable.

Where is Wroclaw? It’s in the southwest corner of Poland. By car, it’s about 3 1/2 hours from Warsaw and 3 hours east of Dresden, Germany.

Six of the Best Things to Do in Wroclaw, Poland

After spending the better part of a day Learning to Make Pottery in Pruszowice, five of us squeezed into the family car and headed to Wroclaw.

One of the first places we visited was the Pasaa Grunwaldzki, a large and glitzy shopping mall. While browsing in some of the shops, we came across a statue of a tiny little gnome, or dwarf.

I love tiny things. I can’t explain why. Miniature things are just so cute. Not to mention that I harbor a secret fascination with faeries, forest nymphs, and all things magical.

My friend Rana laughed and offered to snap my photo with him. She told me that the little statues are all over the city.

We ended up spotting probably 20 or 30 of them without even trying while exploring the other highlights of Wroclaw.

Why are there gnome statues all over Wroclaw?

The first of the Wroclaw Dwarfs appeared in 2001 as part of a subversive anti-communist rebellion known as the Orange Movement, which was quite popular in the 1980s.

Specifically marketed to tourists, officials created a special map that allows visitors to hunt for all the dwarfs or to search for a specific character by name. It even allows you to check “Dwarf Rumors” for breaking news.

Travel Tip: For everything you need to know about these adorable fellas, head to the official site for the Wroclaw Dwarfs.

Rynek, or Market Square, is the oldest medieval town square in Poland. It’s absolutely gorgeous. From the colorful building facades and mix of Gothic and Renaissance architecture to the multitude of cafes spilling out onto the cobblestone plaza, it’s a tourist hot-spot.

After dropping off Dorota’s sister and her boyfriend to meet their friends in town, Dorota headed to a hair salon. That left me with Dorota’s mom, Ula, who would be my local tour guide for the next few hours. Ula directed me to her pottery shop in town where I could park the car while she showed me her favorite highlights of Wroclaw.

Just minutes from her shop, we entered a walled perimeter and meandered along several old streets before arriving at one of the main streets that forms part of Market Square. Despite the chill, kids were giggling and chasing large bubbles a man was sending into the air.

Even in the dwindling light of day, the ornate architecture is stunning.

3. Explore the Church of St Elizabeth

Our next stop was to the Church of Saint Elizabeth, one of the tallest and oldest churches in the city.

Though the current Gothic building dates from sometime in the 14th-15th century, a church has stood on this spot since the 12th century.

In the courtyard of the church is a memorial for Pastor Dietrich Bonhoeffer.

A Breslau-born German who courageously spoke out against Naziism, Bonhoeffer was implicated in a plot to assassinate Hitler.

He was hanged at Flossenbürg just two weeks before Allies liberated the concentration camp.

Language Tip: Breslau is the German name for Wroclaw.

One of the more interesting features inside the church is a miniature replica of a massive organ displayed in a glass case.

Built in 1761, the church’s original organ was damaged numerous times over the centuries. It was finally completely destroyed by a fire that gutted the church in 1976.

The town now has plans to rebuild the organ, which will be so massive the size is difficult to appreciate until you see the size of the mezzanine where it will be placed.

Joining us later, Dorota led us around the exterior of the church and shared an additional story about the church tower.

If you happen to notice that the Gothic architecture of the church building and its more modern Renaissance tower are vastly different, it’s because the original 130-meter church spire was destroyed by severe weather in 1529. Buffeted by high winds and hail, the spire toppled from its high perch and plummeted to the ground.

Incredibly, nobody was injured, leading many to believe that angels had intervened. A stone carving of round-faced cherubs gently catching the tower and lowering it to the ground is now embedded in the church facade at the base of the tower.

The spire was later replaced, but the much shorter 92-meter tower lacks its predecessor’s sharply imposing silhouette.

An absolute must-see in Wroclaw is it’s stunning town hall, which is within sight of Saint Elizabeth’s Church.

The Wroclaw Town Hall dates from the 13th century and is one of the most stunning examples of Gothic architecture in Poland.

By the time Dorota’s sisters and Rana rejoined us in Market Square, it was dark and we were all famished. Luckily they had a treat in store for me!

The gals led me to Steinhaus, an intimate little restaurant with elegant decor.

My heart sank at first. Travis and I rarely dine out, mostly because we’re pretty thrifty and dining out feels to me like a waste of money. The more expensive the restaurant, the harder it is for me to set foot inside. Assuming the prices would be high from the classy interior, I was relieved and very surprised to see the menu after we were seated.

We were there for pierogi, which are traditional Polish dumplings.

I ordered cheese and potato pierogi and sat back to enjoy the evening in the company of five interesting and funny women. The others ordered goose and buckwheat pierogi so we could all share when our meals arrived.

We had more than enough food, but a mix-up in the kitchen left us with an extra meal. The restaurant generously comped the extra order of pierogi.

By the time we left, I was so full I could barely walk!

Travel Tip: If you're planning to travel to Poland, make sure to have local currency, złoty, and not euros. Click to Tweet

6. Treat Yourself to Dessert at Cinnabon

Though the Wroclaw Town Hall is open to tourists and has a restaurant downstairs, Rana told us that Wroclaw has something even better: a Cinnabon!

Most Europeans we’ve met have much less of a sweet tooth than your typical American.

Dorota and her family are no exception, but to my delight, Ula still finished an entire cinnamon roll while I tucked into a caramel pecanbon.

Wayyyy back when I was still just a tiny tater, my older sister Deb went off to college and discovered the Big City of Seattle. She introduced our family to Cinnabon in the process. I haven’t been to one in years, but every time I even smell their pastries, it reminds me of my sister and brings a flood of sweet childhood memories.

If you have a sweet tooth, don’t miss Cinnabon while visiting Wroclaw.

l left Wroclaw in Poland feeling as if I’d just barely scratched the surface of a great city, knowing that it was a far richer experience because I was able to visit not just as a tourist, but as a guest of Dorota and her family.

Who makes for a better tour guide than a local?

They shared their city, their culture, and even their home with me, bringing Poland alive for me in a way that would not have been possible otherwise.

We have more city guides with travel tips from some of our favorite cities.

Take a minute to PIN it!
5 shares