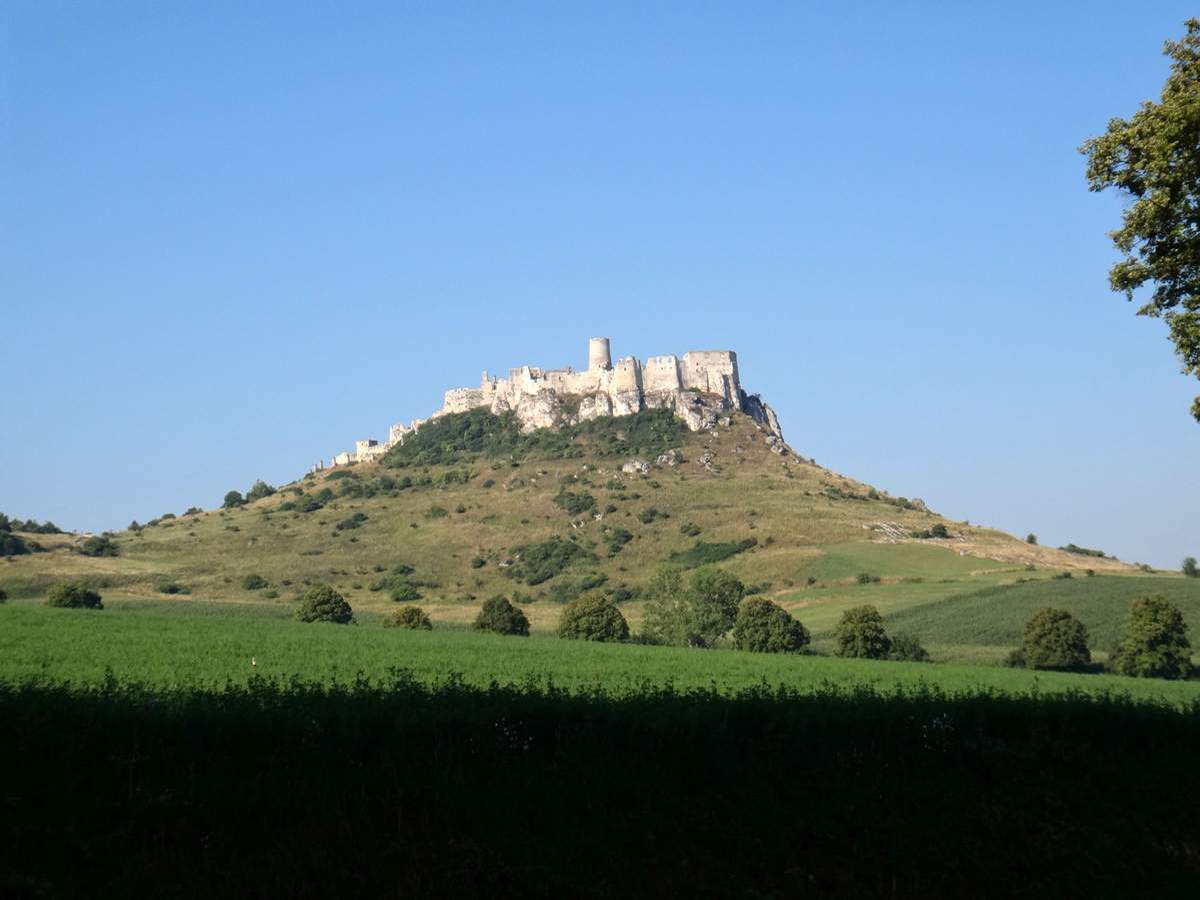 Why We Loved Slovakia’s Spis Castle 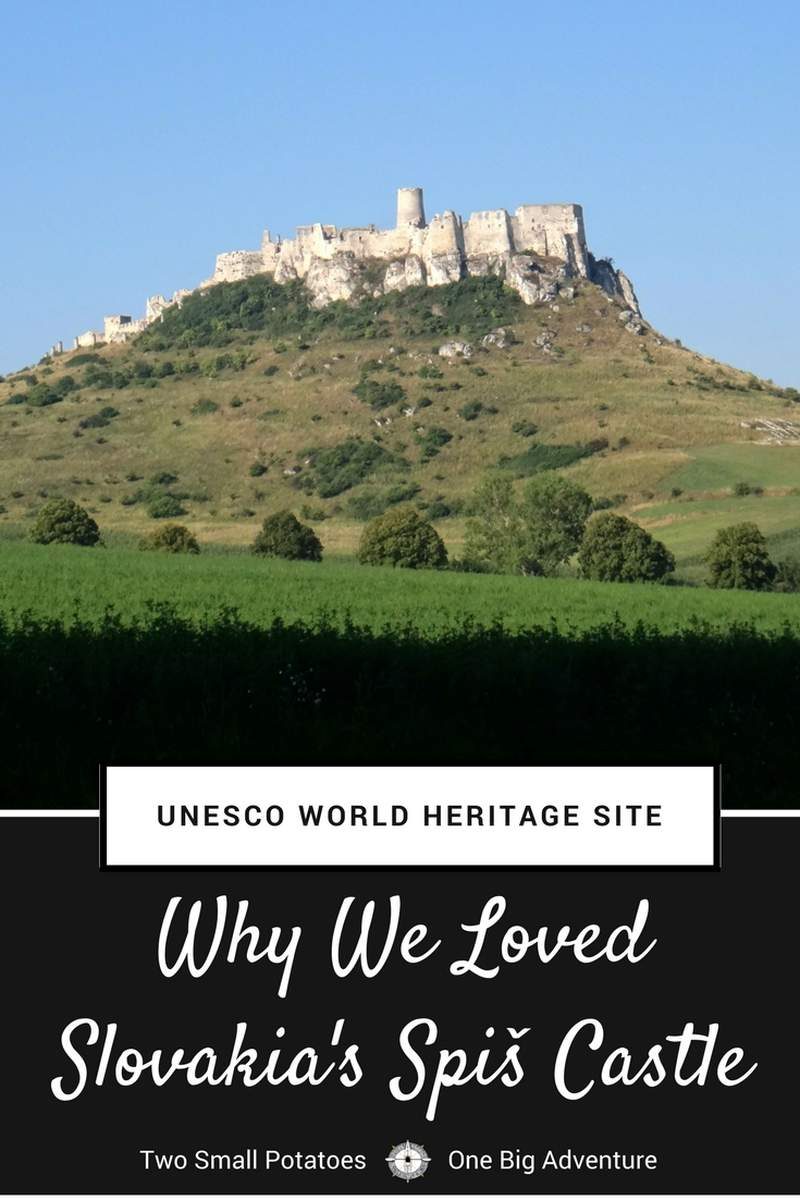 On a continent that has as many castles as America has drive-thru coffee stands, one crumbling old fortress can almost start to look the same as the next.  With that in mind, it would be almost forgivable to assume that Slovakia’s Spišský hrad – or Spis Castle, as it’s know in English – were just like any other European bastion.  Almost.  But to assume that would mean missing out on one of the largest and most stunning castles in Europe.

Planning a trip to Slovakia? You won't regret it! If you love castles, don't miss Spiš Castle - a UNESCO World Heritage site and one of the largest castles in Europe. Click to Tweet

Spis Castle castle is so old that when construction first began in the 1200s, the land still belonged to the Kingdom of Hungary.  Over the centuries, it passed from one royal family to the next, Romanesque and Gothic architecture melding in the stark white, partially reconstructed walls that sprawl over the hillsides.

Destroyed by fire around 1780, Spis Castle was left to nature’s merciless torment until fairly recently.  Now a protected UNESCO site, friendly locals welcome visitors to their stunning cultural treasure ringing a hilltop above the village of Spišské Podhradie.  Yet despite everything the castle offers, it remains under the radar of most travelers when it should top even the most castle-weary adventurer’s bucket list.

The castle is absolutely huge.

Bigger doesn’t always mean better, but in this case, it does.  As one of the largest castle complexes in Europe, Spis Castle covers 41,426 square meters.   Visitors are allowed to walk around most of the perimeter, which means climbing the outer fortress walls.  Just walking around the entire castle grounds takes at least 30 minutes.  Recent renovations have increasingly opened up new parts of the castle to the public, and it offers a dizzying array of rocky paths to follow and rooms to investigate.

Walk the castle’s outer walls for stunning views of the surrounding fields, the nearby village of Spišské Podhradie, and emerald green forests.

Climb the central donjon – or watch tower – to the castle’s highest point and peer down into the open-roofed rooms below.

Rest your feet for a spell by relaxing on a stone window bench cut into the walls of a nobleman’s private chambers. High above the surrounding countryside, listen to legends of doomed princesses on the audio guide while enjoying warm summer breezes.

Poke your head into the castle’s church to admire the wooden beams in the ceiling, the irregular rock patterns in the walls, and the light streaming in from tall, arched windows.

Browse through the interesting museum to see wicked medieval weapons, informative displays, and an entire room filled with bona fide instruments of torture.

And if the torture chamber doesn’t completely destroy your appetite, stop by the small cafe for ice cream or a cool drink.

The castle is a photographer’s dream.

Whether you visit on a bright sunny summer day or with dark gray clouds looming, the bright castle walls, arched windows, and numerous rooms offer tons of opportunities for photography enthusiasts. In fact, don’t be surprised if you see a wedding in progress, particularly during the summer season.  We did, though I was so taken with the locally made vanilla bean ice cream topped with fresh berries that I only had eyes for it. 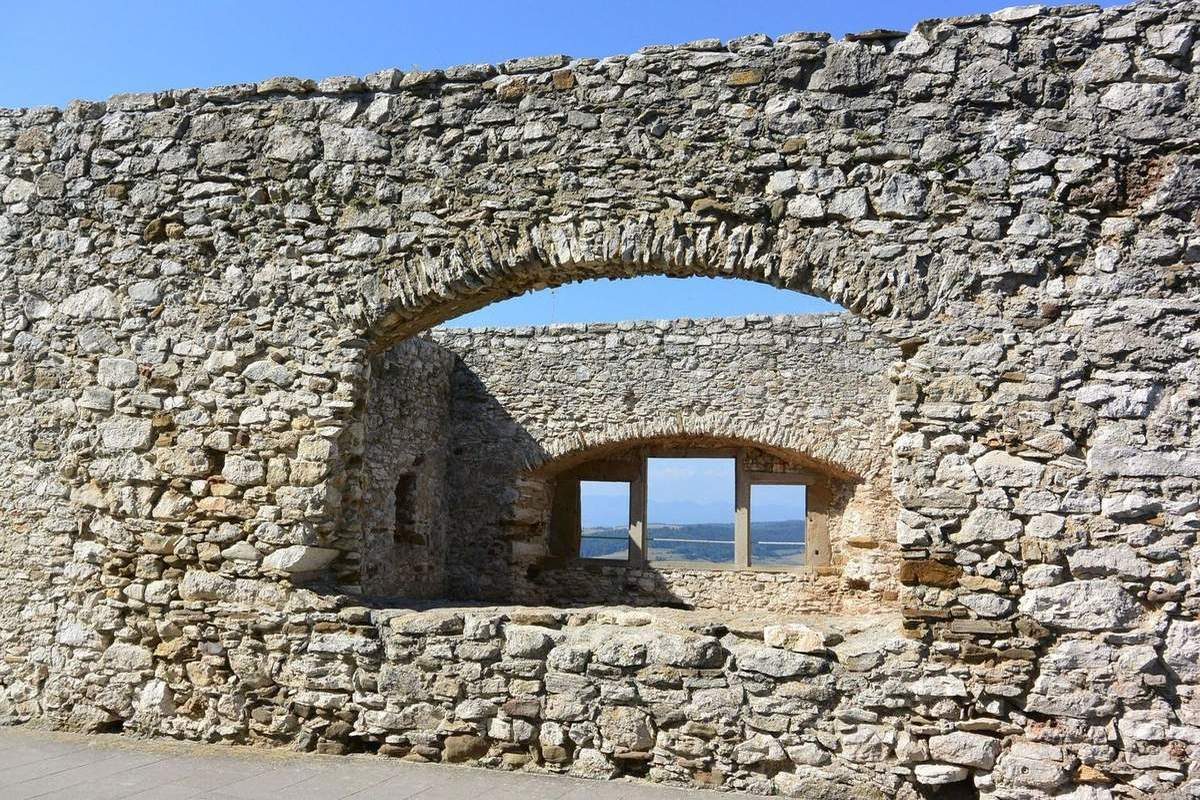 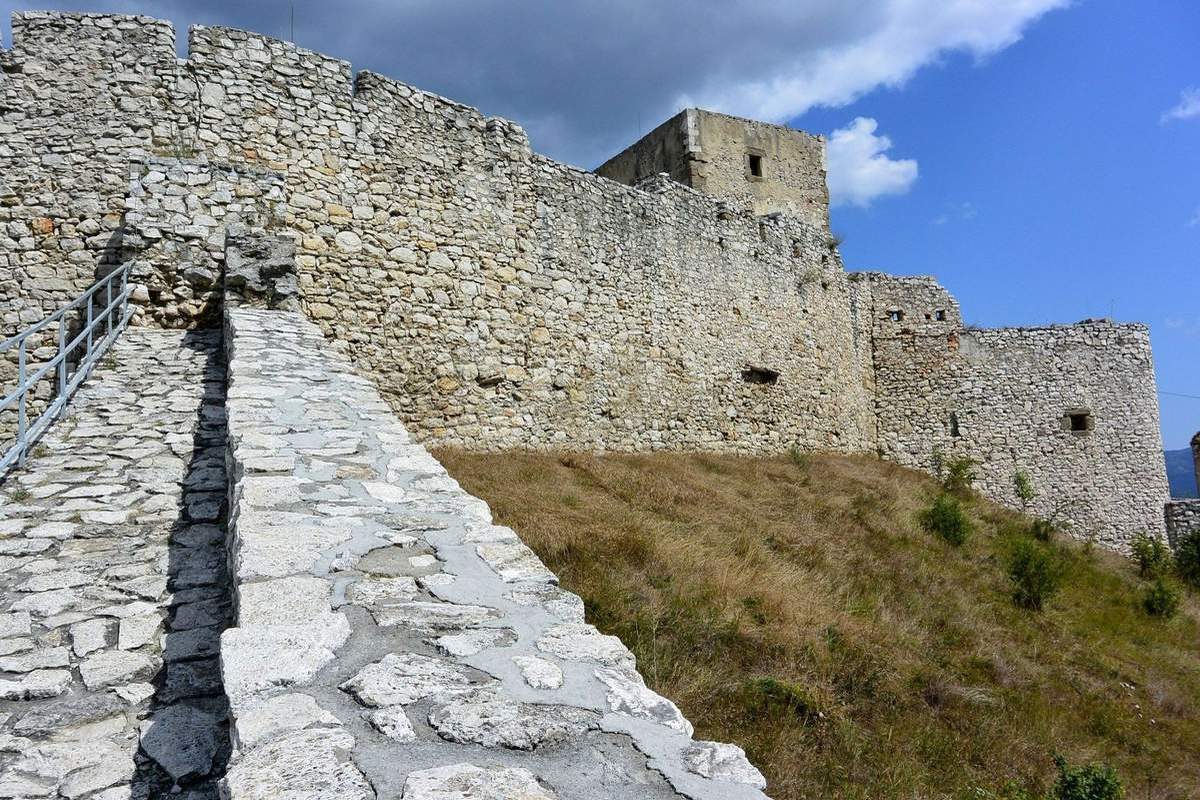 Traveling in Europe and looking for fido-friendly attractions? Plan to visit Spiš Castle, where locals welcome you AND your four-legged friend! Click to Tweet

Not only is the price of a regular adult ticket just 6 euros, but they don’t charge extra for taking photos, and a 45-minute audio guide is included for no extra charge.  The guide is available in a handful of languages, including English.

The audio guide is fantastic.

Or at least is is if you love tales of whimsy and unrequited love.  This isn’t one of those castles you walk through and leave an hour later having learned nothing.  The audio guide is one of the most entertaining we’ve ever had for any tourist site, anywhere.  Rather than monotonously reciting dry dates and facts, the guide intersperses historical information with spell-binding legends.  Even the voice they chose for the English-speaking version is mesmerizing.

A++ on your audio guide, Spis Castle!

Traveling with your furry canine friend?  Of course they’re welcome to join you!

Assuming we would have to leave our dog in the car, we visited early in the morning when it was still quite cool outside.  We were astounded when they not only said she was welcome inside but assured us we could take her out of her dog backpack and proceed with us on leash.  This is the first, and still the only, fee-for-entry castle in Europe where staff have welcomed in our dog to explore the entire grounds with us.  Amazing!

Sometimes parking at tourist sites in Europe costs more than the attraction itself – that or they don’t offer parking at all.  Not so at Spis Castle.  The parking lot is a paved area below the castle and is about a 5 to 10-minute walk uphill, but it’s completely free and is large enough to accommodate cars, RVs (caravans), and tour buses.

It’s still possible to have an intimate experience at Spis Castle.

Although the castle is hardly a secret and tour buses do visit, it doesn’t see the overwhelming number of visitors that many other castles do, such as Germany’s Neuschwanstein Castle or Bran Castle in Romania.

If you visit on a weekday or even a weekend at 9 am before the tour buses start rolling in around 10, you could have the entire complex largely to yourself for close to an hour.

Because of its considerable size, even once the tour buses hit, we could easily escape other visitors by moving into another room, and very few of them left the main castle to walk the outer walls. 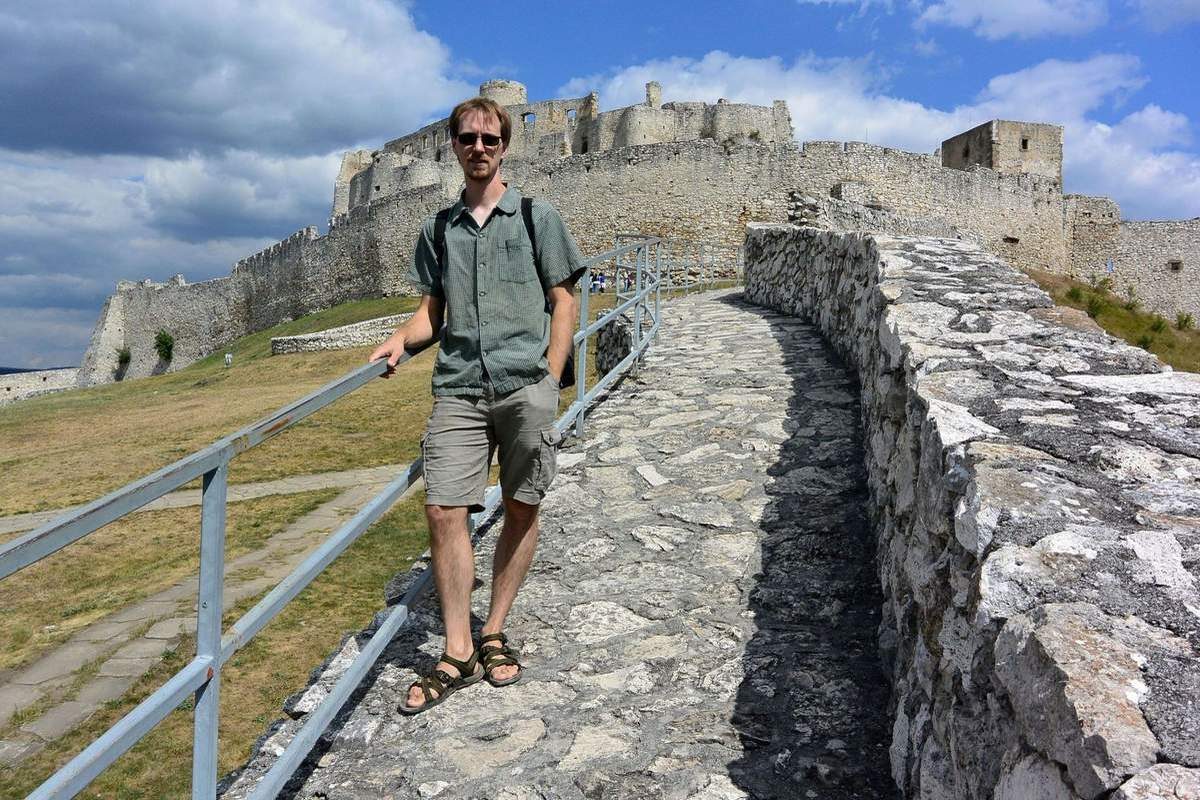 Like this attraction? Take a minute to PIN it!