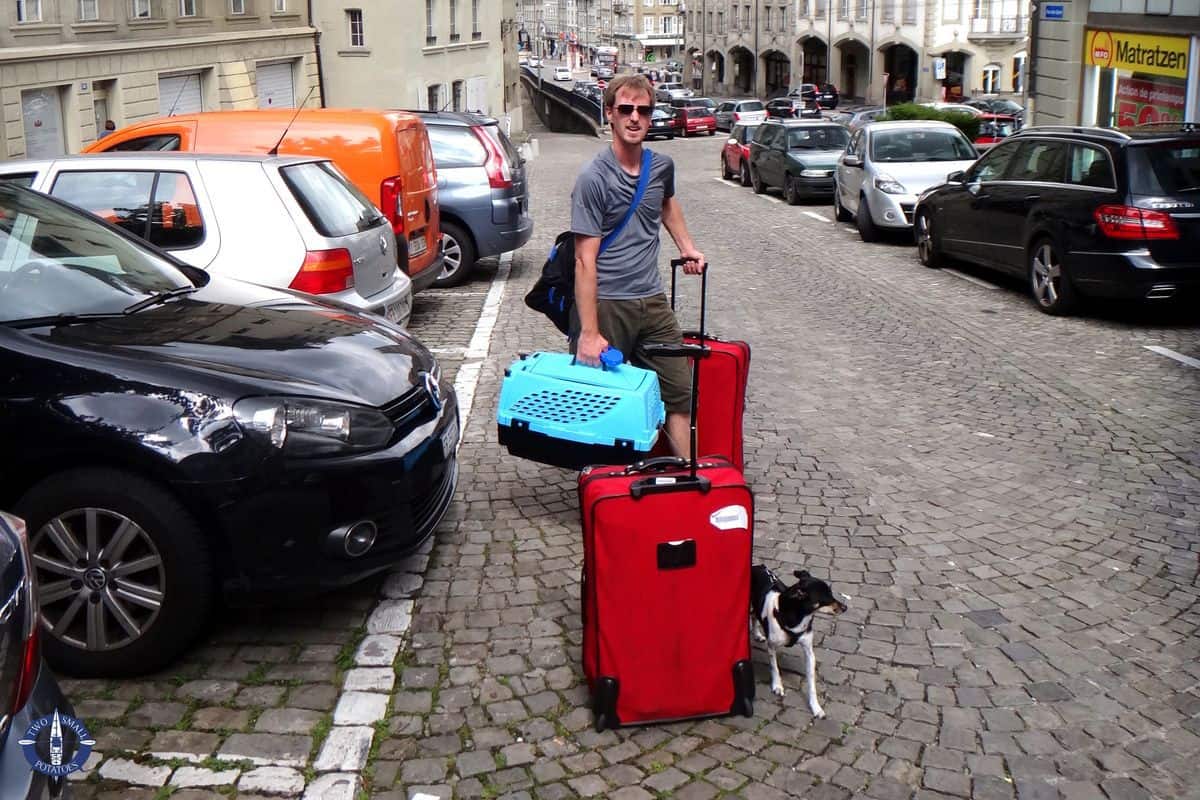 A year ago this week, we arrived in Europe from the US with our luggage, three pets, a place reserved at an Airbnb for one week, and no ideas beyond that what the next few years would bring. We certainly didn’t expect that a year later, we’d be looking at repeating the experience, this time as Americans unemployed in Switzerland.

With the exception of short periods of transition, we’ve both worked since we were teenagers. Neither of us has ever lost a job, been fired, or even been laid off!

In April, Travis’s boss warned him he had “funding issues” and likely wouldn’t be able to extend his post doc beyond the current contract, which ends on July 31st, 2015. At the time, there was the possibility that some last minute funding would come through and allow him to remain in the lab for a second year, but it didn’t pan out.

Then in May, Travis officially lost his job here in Switzerland.

Our first reaction when we found out was sheer disbelief.

Then I got really mad, like a kid who doesn’t get the toy they want for Christmas. For days, the same negative thoughts kept running through my head.

But we signed on for a full post doc in Switzerland! We expected 3-5 years here.

So what? We’re not guaranteed or owed anything in life.

If we had known it would only be for a year…

We would have planned everything differently?

Obviously! And we’d also buy a lotto ticket because with hindsight, we’d know the winning numbers.

Rationally, I knew these thoughts weren’t productive and I knew I sounded like a broken record with friends when we shared the news. Still, it was somehow necessary for me in order to process everything we were facing.

I resented Trav’s boss, Switzerland, even Europe in general for “how they treat foreign employees,” which has no logic whatsoever. I could only think of all the sacrifices we made to move half way around the world for a job that didn’t pan out and an employer that turned out to be unreliable.

We struggled to work through the regrets of unexpectedly ending up unemployed in Switzerland.

It cost a lot of money to move to Europe.

We didn’t have any financial assistance to move to Switzerland – not from the lab that hired Travis, the University of Fribourg, or the Swiss or US government. We blew a big chunk of our savings that we carefully built for the last 7 years in Eugene to fly to Europe for interviews a year ago and then to relocate.

Of the five employers in Belgium, the UK, Sweden, Germany, and Switzerland who arranged for interviews with Travis while we were still in the US, only two of them even reimbursed us for the travel costs they agreed to pay before the interviews.

We sold almost everything we own.

Two vehicles we’d had for years that were paid off and that we loved, gone.

Our kayaks, gone. That last one still makes me tear up.

I left a job I loved in Oregon.

I resigned from the best job I ever had to move to Europe.

As a social worker with Oregon State Department of Human Services, I worked with the most amazing group of people. I made sure kids were safe and local families had the services they needed. I’d given up financial security and fantastic retirement benefits.

Once Travis lost his job in Switzerland, it felt like I’d given up a meaningful professional career in a place we loved living for nothing.

We subjected three pets to a major international relocation.

It was not a minor thing to relocate our three pets – two cats and a dog – to Europe.

The entire process involved significant trauma, with multiple vet visits for the required vaccinations, European micro-chipping (in addition to their US microchips), and uprooting them from their home.

They had to travel by car for six hours and then fly on three planes and a train for nearly 24 hours to get from the US to Switzerland, where they then lived in hotels and Airbnbs for a solid month before we found a place to live.

Touille, our dog, is still terrified of passenger jets flying overhead after the move.

We already have to leave new friends.

We made some amazing friends, and we already have to say goodbye.

It’s a set-back for Travis’s career.

For those who don’t know, Travis is in academia. He finished his PhD in Oregon and came to Switzerland for a post doc (post doctoral researcher), a job that’s typically at a university or medical hospital.

Post docs in academia notoriously pay poorly, but they provide continued training in very specialized areas of study, like science research. They’re not permanent jobs, but they usually last for at least three years.

The expectation is that a science post doc will get at least one publication from their research, which significantly influences their ability to get their next job. Because Travis will only complete one year of a post doc, he won’t have time to finish his research project or write up his findings. He’ll likely have to abandon his project to start over somewhere else once he does find another post doc.

It sets him back the year+ he spent on a wasted post doc in Switzerland, plus the six months prior to that that he spent job hunting, interviewing for the job, and relocating to Europe.

Now that we’re unemployed in Switzerland, we have some pretty big questions facing us.

After taking some time to work through the initial shock and anger, we’ve been able to look at our situation in a more pragmatic way.

We know we’ll be moving by July 31st since the lease on our apartment is up, but we don’t yet know where we’ll go from there. Without knowing that, it’s rather difficult to make some pretty basic decisions – never our strong suit anyway.

Our Swiss visas expire at the end of July.

According to the Swiss Immigration Office, they won’t/can’t extend them for even a month since they were approved based on Trav’s post doc employment status.

Will we have to fly back to the States until Travis can find another job?

Along with health insurance and Swiss social security benefits, Travis has been paying into mandatory Swiss unemployment insurance since he started. Should he apply for unemployment benefits and job hunt here? Jobs for expats in Switzerland aren’t exactly easy to come by.

Or should we just call it quits on staying in Europe, park the animals somewhere, and travel until we just head back to the US to find new jobs? Are we even allowed to do that?

What do we do with our stuff? Sell it or hope he’ll find another job in Europe that will allow us to move it with us? Do we sell the car?

Everything we bought here was second-hand and we can sell it all if we need to, but we shipped things here that we want to keep. If we ship it back to the States, it’ll take us weeks to book passage for it back on a cargo ship.

Do we drop them? If so, when

We’re required to have all this coverage until we leave Switzerland, but if we don’t have valid visas, I can’t imagine our insurance would be valid if something were to happen.

Since we expected the post doc to last for 3-5 years, we signed a 2-year mobile phone plan with Swisscom. The fees for breaking our contracts are around 800 CHF (roughly the same USD).

That one’s a head scratcher.

Travis has an appointment on July 15th to discuss all of this with the unemployment office, but Immigration already told him even if he qualifies to receive unemployment benefits, which we believe he will, they won’t approve visas to stay. Since he has to be in Switzerland to collect unemployment, he won’t qualify for unemployment.

So he should qualify for unemployment because he paid into it, and he needs it because he lost his job through no fault of his own, but he can’t collect it because he can’t stay in Switzerland without a job.

To our friends and family, thank you for your support!

It probably goes without saying that the last few weeks have been rather stressful with more days like that to come.

For everyone who’s sent messages of support, thank you! We appreciate it and love you all!

We still have no idea what comes next, but we’ll figure it out. We always do.

We have so many awesome friends. We have family back home waiting to welcome us back with incredibly exuberant arms and tons of love. We have our health. We have our pets. And we’re both entirely capable of getting good jobs again wherever we land.

Hopefully reminding ourselves of all we have will continue to help us work through the unexpected shock of becoming unemployed in Switzerland.Save

Find yourself unemployed in Switzerland too?

These resources might help, whether you’re expats or Swiss residents.

Looking for posts about our expat job hunting progress in Europe?