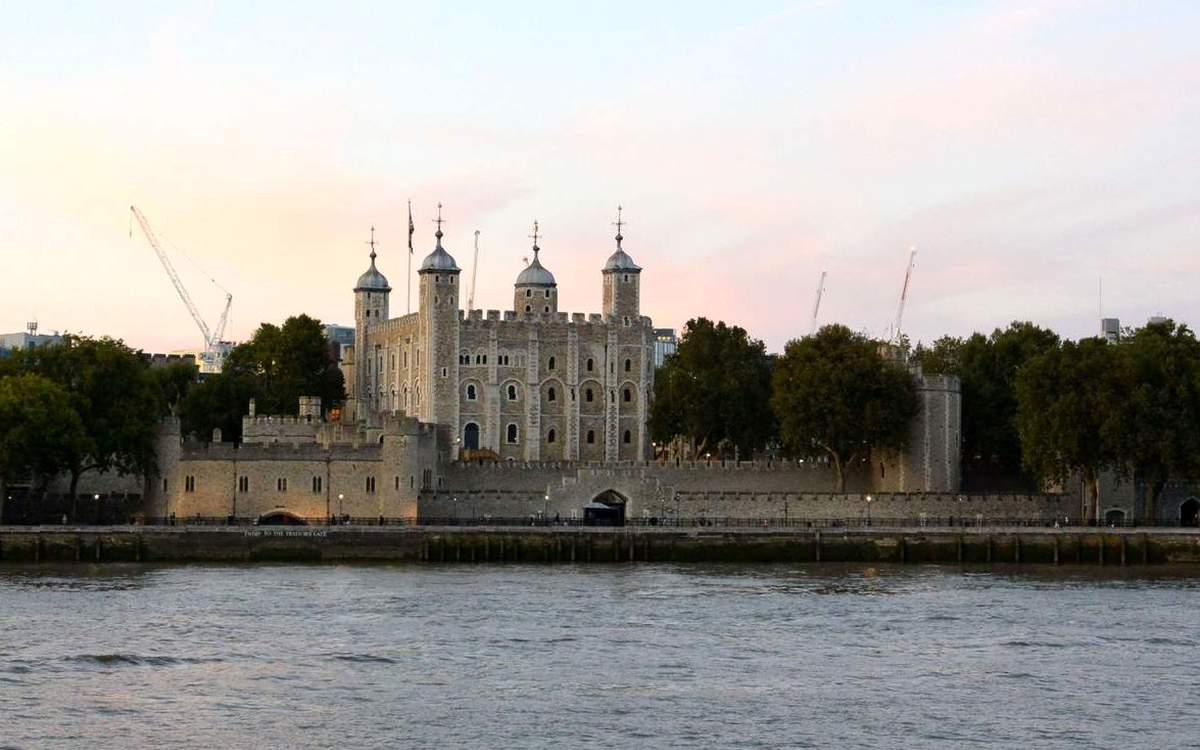 They bear down upon Westminster, the ghost-consecrated Abbey, and the history-crammed Hall, through the arches of the bridge with a rush as the tide swelters round them; the city is buried in a dusky gloom save where the lights begin to gleam and trail with lurid reflections past black velvety-looking hulls – a dusky city of golden gleams. St. Paul’s looms up like an immense bowl reversed, squat, un-English, and undignified in spite of its great size; they dart within the sombre shadows of the Bridge of Sighs, and pass the Tower of London, with the rising moon making the sky behind it luminous, and the crowd of shipping in front appear like a dense forest of withered pines, and then mooring their boat at the steps beyond, with a shuddering farewell look at the eel-like shadows and the glittering lights of that writhing river, with its burthen seen and invisible, they plunge into the purlieus of Wapping.

Typical of most big cities, London offers a long list of attractions, far more than one could tackle in a month, let alone a long weekend. With limited time, it’s necessary to narrow down which ones are worth visiting and which ones can wait.  One of our personal top recommendations is the Tower of London.

On our last full day in the city, we spent the better part of the entire day exploring the castle and grounds.  Not only is it a fascinating place to visit, but I was relieved to be able to sight-see at a slower pace than our 13-kilometer “Walking Tour of London” the day before (which we also highly recommend!)

For those who don’t already know much about the Tower of London, it was originally built as a castle but was later used as a prison, armory, treasury, royal zoo, and home of the Crown Jewels. It was built in the latter part of the year 1066 by William the Conqueror following his successful conquest of London.  Fearing reprisal from Londoners, who at the time were newly acquired subjects owing him no loyalty, he ordered the construction of the White Tower and an outer wall for protection against possible uprisings.  This original single outer wall was once the only barrier between the southern perimeter of the fortress and the waters of the Thames River.

King Edward I would later order the completion of a second perimeter wall in a concentric ring fully encompassing the first wall and its towers protected within.  The Traitor’s Gate in this new outer wall provided a convenient water gate for visitors arriving directly from the Thames into the prison.  Guard towers were built near the entrance. Numerous arrow slits in the stonework allowed archers to protect the gate.

Though most English kings typically didn’t spend considerable time at the castle, preferring other, more luxurious accommodations, the interior rooms were still designed to include comfortable living quarters for royalty.  It was common for the kings to frequently move between castles, traveling with an entourage of upwards of 700, including wives, family members, and servants.  Edward I only spent 53 days at the Tower of London during his 35-year reign.

It still seems like an odd idea to me since I’ve always thought of kings living primarily in a single, primary castle, not moving frequently like nomads – albeit with fancier lodgings.

Climbing a set of stairs to the top of the inner castle wall, we followed it into the Salt Tower, the infamous prison cell where several famous men were imprisoned and often tortured before being executed.  Their inscriptions and messages of hope and farewell were still scrawled on the walls.

The famous Scottish king, John Balliol, spent three years as a “guest” in the Salt Tower, though he was treated well. He was allowed out of the Tower as long as he stayed within 21 km of London; he had a pack of hunting dogs, horses, a cadre of servants, and even “a ‘pledge-man’ who remained at the Tower as a hostage while John was away hunting.”

While he was at the Tower, the Scots continued their rebellion against the British under the leadership of William Wallace (think Mel Gibson from Braveheart).  Ironically, Balliol was released as part of a treaty but failed to return to Scotland, instead living out the remainder of his days in France and ceasing his support for future Scottish uprisings against the Crown.

Several hundred years later, the prison would briefly house Anne Boleyn, King Henry VIII’s second wife.  She was beheaded at the Tower for “adultery.” It’s widely known that the king simply simply wanted to remarry someone who could provide him with heirs to the throne.

While wandering the castle grounds, we saw a crowd gathered around “Anne Boleyn” and stopped to watch the skit.

Appealing to the crowd, she pleaded for us to share how she could make our peasant lives better – while strongly encouraging us to remember that lowering taxes wasn’t an option since they were necessary for the Crown to provide for its people.

I had a feeling that my first thought wouldn’t go over very well:

No taxation without representation!

Perhaps an even sadder tale is that of Lady Jane Grey, who would ascend to the throne in 1553 after the death of her cousin, Edward VI, according to his wishes.  Serving as queen for only 9 days, she was arrested for treason upon the orders of Edward VI’s sister Mary, who was rightfully entitled to the throne.  Sentenced to death, Lady Jane Grey first witnessed her husband’s execution before she herself was beheaded.  She was only 16. She and her husband are both buried at the Tower.

Executions at the Tower

Despite the Tower’s nearly thousand-year history as a prison and the gruesome tales of torture and execution that swirl around it, only 22 executions were ever actually carried out there.  Of these, 11 were men convicted of espionage during WWI.  A memorial to them stands atop one of the castle walls.  Incredibly, the memorial includes a letter written by German prisoner Carl Hans Lody commending his captors for their fair treatment of him before he was executed on 11.06.1914, the first to occur in 167 years.  A 12th man, Josef Jakobs, was a German spy who was executed in 1941.  His was the last execution in the Tower’s history.

After descending the Salt Tower, we came to a room that finally explained the wire animal sculptures we’d been seeing since we’d arrived at the front entrance.

The baboons, elephant, lions, and polar bear currently on the castle grounds are all part of an exhibit by artist Kendra Haste.  The intent of her art pieces is bring life to the memory of the Royal Menagerie that existed for six centuries at the Tower, beginning in the 1200s.  The polar bear was a gift presented to the Crown from Norway in 1251; tethered to shore with a long chain, he was allowed to swim in the Thames and hunt for fish.  Snakes were kept warm on the stove.  Sick lion cubs were bottle fed by royal keepers.  By the time the Royal Menagerie was dissolved in 1835, it consisted of nearly 300 animals that were re-homed at Regent’s Park, which would later become the London Zoo.

After walking nearly the entire perimeter of the castle walls and visiting almost every tower, we finally made it down to the central courtyard at the entrance of the Jewel House.

We breezed through, gaping at the crowns, jewelry, and other ceremonial items that form part of the Regalia, symbolic items used in the coronation of English Royalty.  Because many of the diamonds and other gemstones are removed from each successive crown for the next, most now stand as skeletal frames, devoid of adornment. Sad, because I love sparkly baubles.  We also don’t haves photos of the jewels that were there because photography isn’t allowed in the Jewel House.

The very last tower we visited was the White Tower herself. Rounding the corner before climbing the stairs, we passed a wildly ornate cannon hunkered down in the yard.

Even after entering the White Tower, I didn’t immediately realize how big it is or what it encompasses. The entire building is a giant museum, with rooms set up to chronicle the history of the Royal Mint, the Royal Arsenal, and the Line of Kings, along with other important exhibits.

We ended up there until closing time when they gave us the boot!

The first, biggest, and best room (in my opinion) houses the Line of Kings exhibition, the world’s longest running visitor attraction.  Dating back to the 1600s, this exhibition is filled with life-size likenesses of several kings, along with replicas of their royal steeds, hand carved from massive blocks of solid oak.  Several kings and their horses are outfitted with their original armor, all of which is incredibly ornate and personalized.

Probably the most stunning suit on display is a set of armor that was made for the thirteen-year-old Prince of Wales, Henry Stuart.  Dating from the early 1600s, it’s richly embellished with exploits of Alexander the Great etched into the metal.

Another interesting little device in a clear case apparently immediately struck a chord with Travis.

Simply labeled “Collar of Torment,” it was supposedly used in the 16th and 17th centuries to restrain prisoners. Another recommended use, however, was to control “scolding or wayward wives.” Now whenever I disagree with Travis, he says I need “The Collar.”

Let’s just go ahead and see him try to put it on, eh?

Passing into another giant room, we browsed past centuries of fascinating, horrifically wicked looking weapons, some locally made and others haling from faraway lands and gifted to the Kingdom.

I was surprised to see a display case with several modern day hand guns – though not just any ordinary guns.  One – a white gold, blue enamel, diamond-encrusted pistol – was given to the Royal Armouries by the police during their hand gun buy-in from 1997 to reduce the number of guns in the city.  Most of the guns were destroyed, but it’s no wonder that artistic pieces like this, sparkling with over 1500 diamonds, were preserved.

Also on display is a replica of the original Anointing Spoon.  It’s one of only four surviving pieces of the Regalia, and the oldest, dating back to the 12th century.

This silver-gilt spoon with pearls was used during the coronation of a new Sovereign by anointing him with holy oil. When King Charles I was executed in 1649, Oliver Cromwell ordered the destruction of the entire Regalia in an effort to stamp out royalty, but the spoon survived.  The Regalia currently used in royal coronations was commissioned by King Charles II after 1660 when the monarchy was restored.

The last room we visited before the Tower closed was a room filled with exhibits of old coins and information about the history of the Royal Mint.

Even after the better part of the day at the Tower, we didn’t get to see everything.  We left at closing time, but easily could have spent several more hours lost in one room or another, trying to cram in a thousand years of history in less than a day.

For anyone who gets the chance to go to London, I would recommend bumping it to the top of your list of sights to see!

Know Before You Go
21 shares