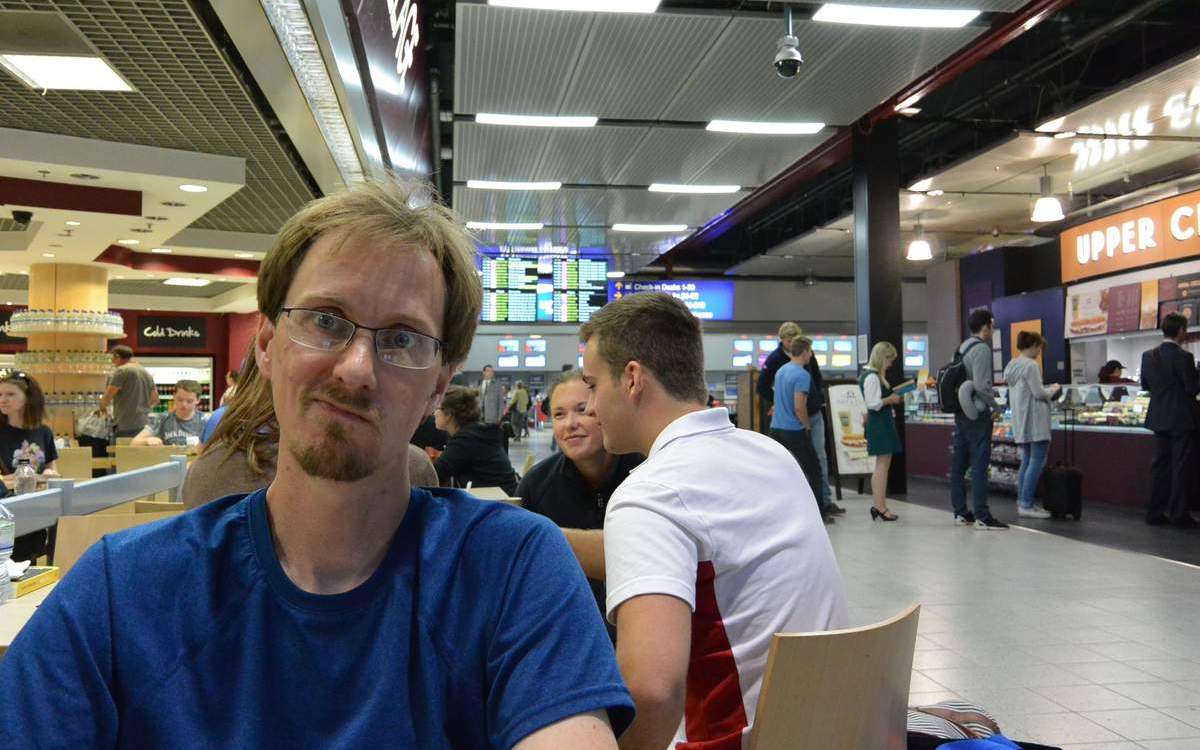 At some point in the last few years, we lost our enthusiasm for commercial flying. It wasn’t any one thing that caused it, but rather a slow death from the exhausting process that it’s become. Even a one-hour flight still requires the inevitable 1 to 2-hour drive to the airport, the 2-hour process once there that’s a weird mixture of hurry–wait–hurry–wait, and the boredom and discomfort of the flight itself. Once you land, you’re still just at another airport. Lamesies. And all of that’s assuming that you have your passport when you arrive at the airport so you don’t end up suffering a huge passport fiasco. I’ll take a road trip any day.

Clearly this post is going to be about our huge passport fiasco. Perhaps you’ve been through this? It can’t just be us. Please tell us it’s not just us!

Who else loves Airbnb?

While it seemed pretty terrible at the time, it’s become one of our favorite travel memories, in no small part to not one, but two different Airbnb hosts in London.

After spending three days in London for Trav’s job interview, we were both looking forward to going home to Switzerland. All we had to do was catch our flight.

Easy, right? How hard can it be to catch a flight?

We’d flown into London via Gatwick Airport and were flying out via Luton Airport, which we hadn’t even heard of until we booked our tickets.

Since we weren’t sure how to get to Luton Airport, we got up early and were on our way to the train station hours before our flight. Typically when we fly, we’re so late arriving at the airport that we walk onto our plane shortly before the doors close for take-off, so we were quite pleased with ourselves!

If I knew in advance what our day would turn into, I probably wouldn’t have gotten out of bed.

From our Airbnb, we walked to the nearest Tube station, manhandling our wheeled luggage over the rough cobblestone roads. Unfortunately, we were completely unprepared for London public transit – on a weekday – at 8 am.

While we can’t blame our passport fiasco on rush hour traffic on the London Tube, it is definitely an experience these two country bumpkins hope never to repeat.

Arriving underground on the platform, we realized the solid mass of people packed along the platform wasn’t moving. Everyone was waiting for the next train. Lines didn’t exist; it was a solid wall of humanity. Stopping when we couldn’t get any closer to the incoming train, the space behind us quickly filled with people stepping off the massive escalators into the artificially-lit underground station.

When the train arrived, very few people exited, in turn absorbing only a handful of folks from our platform. We inched forward, then watched in disbelief as that first train left without us.

Travis and I stared at each other mournfully, wondering if we would ever get on a train that morning. But we weren’t worried. We’d gotten up super early so we’d have plenty of time to catch our flight!

After this process repeated with several more trains, we finally successfully boarded, thanks to the sheer crush of people behind us pushing us on board.

For about 15 or 20 minutes, we rode that way, standing, smushed against the window, surrounded by silent morning commuters dismally avoiding eye contact.

Disembarking at St Pancras Station – adjacent to King’s Cross, another major train station – we began an extended and rather hopeless search for the next train that would take us the rest of the way to Luton Airport.

Finally tired of walking aimlessly in search of any information or maps that would direct us, we split up. Divide and conquer!

I waited in line for about 15 minutes at an information booth while Travis went in search of an employee to ask. When he found a helpful employee, she directed him to:

For country bumpkins like us who aren’t accustomed to cities, it clearly was not obvious that our train to Luton wouldn’t be below ground like the Tube.

We were fools – fools I tell you! – for thinking our troubles were behind us. Returning our Oyster cards should have been as easy as withdrawing money from an ATM machine.

After waiting in line at the machines, we went through the entire process of attempting to return our cards, only to have the machine reject our refund because we had more than £15 remaining on each card. We had to go to the actual office for someone to perform the transaction.

Again, a helpful employee directed us cheerfully to the Oyster office, where we got in line. Again.

Once we successfully returned our Oyster cards, we zipped off to the above-ground train station right upstairs to buy tickets. Again.

It then took two attempts to buy our train tickets from the machine. When we chose our route and inserted my credit card, it was rejected. The machine gave us an unapologetic message that because that card had already been used that day for a transaction – minutes before to return our Oyster cards – the card could not be accepted.

Are you scratching your heads right now?!?!?

At this point, we no longer had any time to spare if we wanted to catch our flight, and we still hadn’t even gotten to the actual passport fiasco!

Luckily, Travis was able to use his credit card to buy our tickets. A few short minutes later, we slumped in our train seats, heaving huge sighs of relief. The hard part was over. In roughly 30 minutes, we’d be at the airport, just in time for our flight.

You have our passports, right?

Staring at me in horror, he shook his head. Not wanting to leave them out at our Airbnb where folks were coming and going, he’d safely tucked them under the mattress.

And that’s where they remained when our flight departed London Luton Airport to Switzerland without us.

As soon as we arrived at Luton Airport, we checked in at Departures.

An airport employee confirmed that we absolutely couldn’t fly without our passports. Perhaps if we’d been within Schengen, we could have used our Swiss residency permits, but even those were expired and we hadn’t yet received our new ones.

A sympathetic attendant with EasyJet offered to get us on a flight the following day, but there was little else she could do. With no other choice, we booked it.

But for that, we’d still need our passports…..

I messaged our Airbnb host, Kat, and told her about our passport fiasco, that we’d forgotten them at her flat. Since she wasn’t even in London, I didn’t expect she could do much, but I was worried about someone else finding them.

Quickly responding, she immediately offered to either let us stay an additional night for free at her flat or to call a courier company and see if they could deliver our passports to us asap at the airport.

The courier idea hadn’t even occurred to me, and the offer to stay a night for free was really thoughtful.

We were tempted by the generous offer to stay at her place. After the 3 1/2-hour ordeal of getting to the airport though, neither of us wanted to turn around and go back in to London, only to repeat the experience the next day.

The sun slowly crossed the sky while we waited for the courier to deliver our passports. We had lunch. We messed around on our smart phones until we’d used up our 30 minutes of free WiFi at the airport. I’m pretty sure Travis fell asleep for awhile where we sat at the entrance, the over-sized “Departures” sign mocking me while he napped.

While we waited, I browsed around on Airbnb and found a possible room rental just five minutes from the airport. Not only was it half the price of nearby hotels, but the host listed transportation to the airport in the morning as a free option. I sent the host a message explaining our situation, and he immediately accepted our reservation, even offering to come pick us up when he got off work at 6 pm.

But we still needed our passports!

By then, we’d realized the courier wasn’t coming.

Would the passport fiasco never end?

We were trying to figure out if one of us should head back into London for our passports while the other waited with our luggage when we got a message from Kat, immediately followed by a call from her boyfriend.

He was on his way to Luton Airport on the train with our passports!

Astounded and grateful, Travis offered to meet him at a train station a few minutes away so he could catch the next train back into London.

While Trav went to retrieve our passports, I worked on a cheesy puzzle on my laptop. Like a true knight in shining armor, Trav deposited a Costa Coffee mocha in my hand before he left.

Minutes after getting back with our passports, our Airbnb host for that night, Ian, arrived to pick us up. He immediately erased the misery from our day with his cheery greeting:

He showed us to his car where I started to climb into the front passenger seat, then realized we were in England where the steering wheel is on the right side. And by right side, I mean wrong side. Haha!

We’ve seen it in movies, but it doesn’t compare with actually driving. It was wild.

For the rest of the night, we got to know Ian. We told him about our passport fiasco and he told us about his job as a flight attendant for one of the local airlines.

He welcomed us into his home, showed us our immaculate room, recommended a stellar take-out Chinese place – even placing our order for us, and uncorked a Figure Libre “Freestyle,” a nice bottle of French wine.

Giving us his personal email, Ian encouraged us to contact him if Travis gets the job in London. He said he’d be glad to help in any way he can if we relocate there.

In the morning, he made us coffee and warm chocolate-filled croissants before giving us a free ride back to the airport. We couldn’t have asked for a better host or a more pleasant last evening in England.

Back at Luton Airport, our morning flight was delayed by 30 minutes. When our flight number finally came up, we were so ready to get on that flight, passports in hand. So ready.

Can you tell I’m excited to finally be flying home? Travis still isn’t convinced we’ll actually make it on board.

Travis really enjoyed his interview at King’s College, but these are the faces of Two Small Potatoes who are clearly not ready for the big city yet.

Of course we would adjust to some things about city life, but I fear my heart would grow heavy to hear the rush of cars, trains clacking, and the constant noise that is the city.

As our plane rushed us back toward the tinkling cow bells and rolling green fields of our village, I just wanted to get home to Switzerland.

Looking for fabulous touristy things to do in London?

Then you might like touring the Tower of London or taking a fabulous free Walking Tour of London with our custom map and city guide.