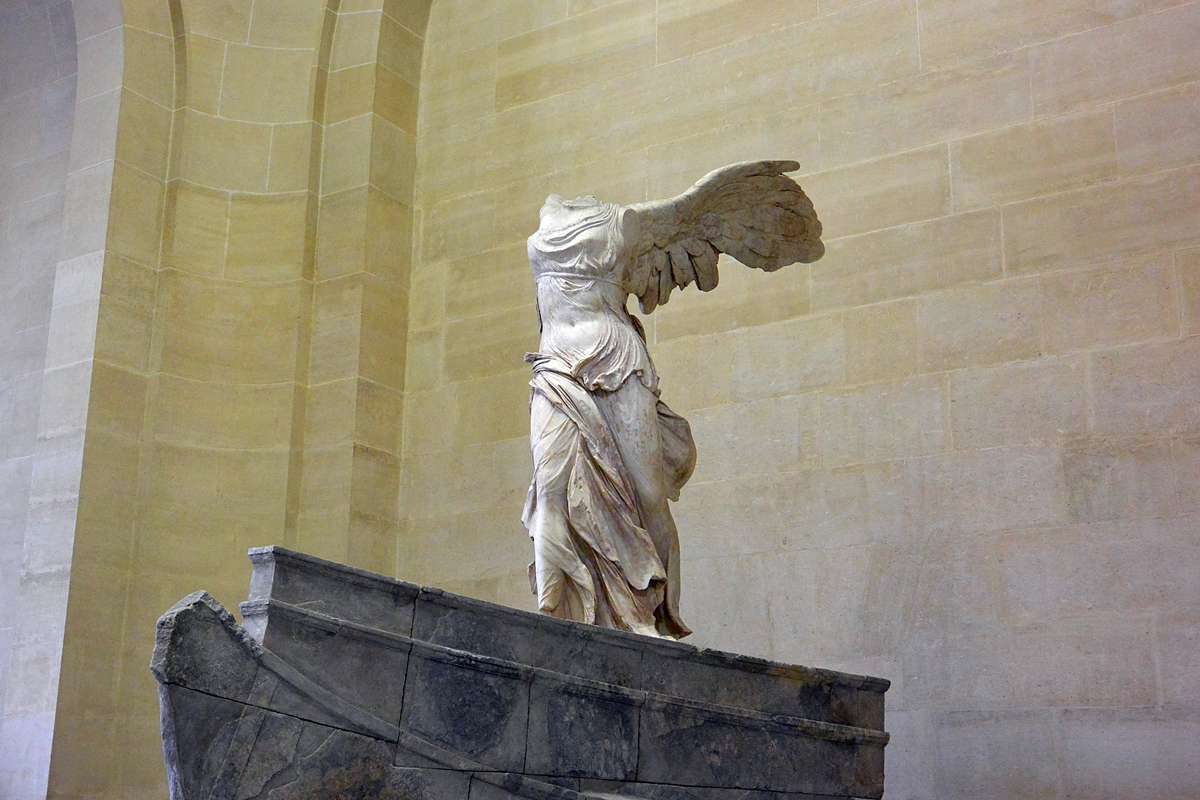 The Louvre, The World’s Largest Museum

France
May 13, 2016 0
*This site contains affiliate links. If you purchase through these links, we may receive a small commission at no extra cost to you. 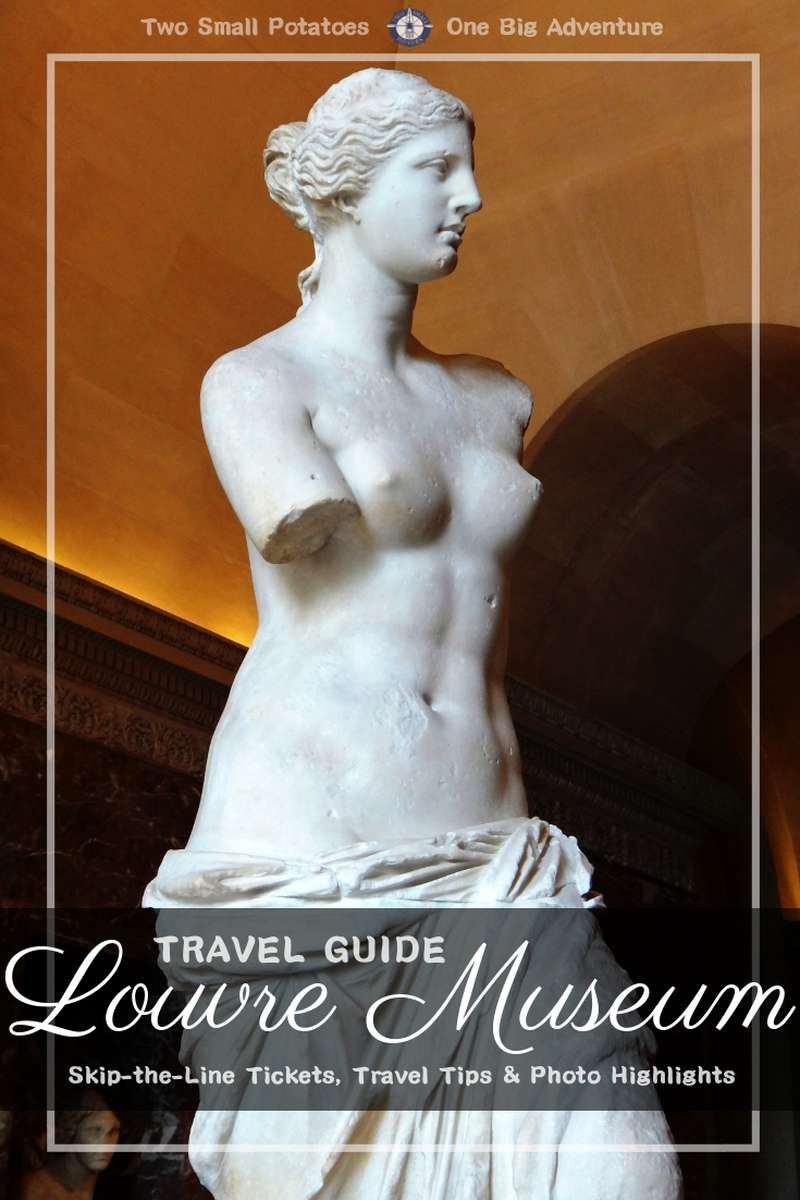 One of the most visited attractions in Paris is the Louvre Museum, and for good reason. As the largest art museum in the world and an important historic monument, you don’t have to be an art aficionado to enjoy a day browsing through its many rooms.  If you’ve read some of our other posts, you know we’re budget travelers who prioritize outdoor excursions.  So it’s saying something that the Louvre made our list of places we absolutely wanted to visit – along with Notre Dame and the Eiffel Tower – during our 5-day road trip to Paris.  If you’re planning your own trip to this iconic attraction, these travel tips and photo highlights will be useful to help you get the most out of your visit.

Find out what you need to know to plan a stress-free trip to the Louvre Museum in Paris. Click to Tweet

BUDGET TIP: Certain visitors qualify for free admission to the Louvre.  Find out if you’re on the list.

It’s important to note that the museum has not one, but four points of entry: the Pyramid, the Porte des Lions, the Carrousel, and the Porte de Richelieu.

While the Pyramid Entrance is typically the most popular because of its iconic glass pyramid architecture, the other entrances may offer shorter lines.  Some travel sites refer to the other entrances as “secret,” but they aren’t, so don’t go expecting them to be deserted.  They simply aren’t as recognizable or popular as the Pyramid.  They also aren’t necessarily always open, so we’d recommend first checking the lines at the Pyramid and entering there unless it’s a long wait.  Particularly if you visit on a weekday early in the morning during the off-season, you might not have much of a line at all.

TRAVEL TIP: Purchase “skip-the-line” tickets online in advance on the Paris Visitor’s Bureau site.  We bought our tickets there.  Upon arrival, an employee directed us past a long line of people in the ticket line to a nearly empty security line.  A few minutes later, we were officially inside the Louvre!

Regardless of which entrance you choose to access the museum, you’ll receive a map of the rooms and current exhibits.  Maps are also available at the various information desks throughout the museum.

Works of art at the Louvre are categorized into one of eight departments:

Because of the sheer size of the museum and the number of works it holds, it’s not a bad idea to visit the main website for the Louvre before your visit.  There you can plot out an exact map of specific works you want to see and the shortest path between them.  This is especially helpful if you have limited time.

If you have the luxury of a more leisurely visit or don’t have specific items you want to see, then you might enjoy just freely wandering through the museum, as we did.  Despite not planning our route, we saw many of the more famous works of art just by chance.

If you do go with an itinerary, try to be a bit flexible to allow for unexpected discoveries that aren’t on your ‘must-see’ list.  Some of our favorite pieces were actually not in any specific room or exhibit.  For example, no sooner had we entered the Louvre than we were met with this fine specimen.  I still don’t know who he is or what happened to make him want to skewer his own eye, but this sculpture ended up being one of my favorites at the museum.

Considering that the museum gets over 8 million visitors a year, you might be surprised to learn that it’s entirely possible to visit rooms without a single visitor.  Surprisingly, the very first room we entered was devoid of all but two people who were just leaving.  It’s a sign not only of how big the Louvre is but also that a handful of pieces draw the vast majority of crowds.  It’s rather nice because it allows visitors to appreciate countless priceless statues, paintings, and pieces of jewelry in peace.

Any idea where most visitors head first?  Yup, the Mona Lisa.

Two of the Louvre’s greatest treasures are included in the Greek, Etruscan, and Roman Antiquities collection.

The first is one of the greatest masterpieces of ancient Greece – The Winged Victory of Samothrace.  Carved in pale gray and white marble, the 2.5-meter statue depicts the Greek goddess Victory, triumphantly displayed on a rock shaped like the bow of a ship.  Also called the Nike of Samothrace, it dates from about the 2nd century BC. Discovered in 1863, she’s been on display at the museum since 1884.  To this day, the statue’s head has never been found, and the identity of the original artist remains unknown.

The second great treasure in the Greek, Etruscan, and Roman Antiquities collection is a statue commonly known as the Venus de Milo.  While it’s still disputable about which goddess the statue portrays, most agree that it’s either Aphrodite, the Greek goddess of love and beauty, or the sea goddess Amphitrite.

Discovered on the Greek island of Milos in 1820, the statue remains shrouded in mystery to this day.  Little has been confirmed about the origins or creator, though it is believed the artist was Alexandros of Antioch and that it dates from about 100 BC.  The statue was once painted and adorned with bracelet, earrings, and a headband, all of which has long since been lost.  With the arms still missing, scholars can only guess as to what pose she originally held.

At nearly seven feet tall and displayed on a pedestal, she gracefully towers over the throngs of visitors clamoring to see her beauty in person.

Not only is the Louvre a museum to showcase paintings on canvas, but it was originally a palace built in the 12th century.  Throughout its history, French kings have commissioned a variety of artists to design and decorate the complex.  The ceilings themselves are works of art, detailed with paintings too large to really comprehend.  With so many paintings and pieces of art on display, it can be easy to forget to look up while you’re browsing from room to room.  Some of the most beautiful and fascinating pieces of art wall and ceiling frescoes.

One of my personal favorites is a massive ceiling fresco painted by François-Joseph Heim, a 19th-century artist.  In the painting, Jupiter passes Vesuvius the fire that will destroy the cities of Herculaneum, Pompeii, and Stabiae in 79 AD.  Three women who represent the cities beg for mercy.

Another huge fresco, L’Egypte sauvée par Joseph, is particularly striking for the red-rimmed eyes of the desperate women in black and one especially disturbing fire-breathing dog.  Not a happy feel-good painting, but certainly stunning.

Lovers of Egyptian art will be enthralled at the Louvre.  The collection of Egyptian Antiquities includes over 50,000 pieces displayed in at least 20 rooms.  No fewer than five massive rooms hold nothing but black and red pottery in every shape and size.

BUDGET TIP: After hours of walking through the Louvre, you’ll undoubtedly be hungry and thirsty.  Visitors can purchase food and drinks at the museum, but they’re expensive.  Save money by packing a sack lunch and bringing an empty bottle to fill with water once inside.

Be prepared for total art overload when you enter the realm of paintings.  You’ll pass from one long hall to the next, all lined with paintings.  They merge into a steady stream of naked-breasted women with glowing white skin and muscular men vanquishing demon and beast alike.

Even without a map, it’s easy to find the Mona Lisa.  Just follow the hordes of visitors streaming steadily through the galleries of paintings.  All paths lead to the famous lady’s enigmatic smile.

Though the painting has a continuous mass of folks lining the barrier, it shouldn’t take too long to find your way to the front. Nobody stays longer than 30 seconds.  I’m not even sure some folks look at the painting.  Most snap a quick selfie and move on.

Surprised by how small the painting was in person, I have to admit I was completely underwhelmed.  It’s hardly possible to admire a work of art while being jostled about by a mob of zealous visitors.  Mostly though I just don’t understand why this painting in particular is so famous.  After seeing so much exquisite art in the Louvre, I was simply not captivated by the Mona Lisa.

Seriously, I’d rather hang a painting of this skeezy dude on my wall.

Hey, because it’s you.

Why is the Louvre Museum in Paris worth a visit? Find out! Click to Tweet
Islamic Art

We visited various rooms and artifacts from all eight departments of the Louvre, but not all are pictured here.  We really tried to focus on pieces that stand out for their fame or exceptional beauty, especially those with less notoriety.  For us, many of the pieces we saw in the room sof Islamic Art fall into this latter category.

Considering that I know next to nothing about Islamic culture or history, these rooms were a complete surprise for us.  The artifacts there are absolutely stunning – some of the most beautiful of any in the Louvre.  From the colorful ceramic tiles and delicate cobalt blue vases to the daggers inlaid with gems and decorative wooden doors, it’s impossible not to be in awe.

One last highlight worth mentioning is the 12th-century foundation of the original palace, which is located beneath the museum.   Even if you just walk through briefly, it’s an interesting site.

From there, make sure to end your visit at the Louvre at its inverted pyramid beneath the Pyramid Entrance.

In a single afternoon, it’s possible to visit many of the most famous treasures in the Louvre Museum.  With over 34,000 pieces housed there, a person could spend weeks exploring and not see everything.  Ideally, allow at least 4-6 hours for our visit.  We spent about five hours at the museum and were thoroughly impressed.  Even to a couple of Idaho bumpkins who don’t typically prioritize museums when we’re traveling, the Louvre isn’t just any museum.  It’s the Holy Grail of all museums.

Looking for a way to relax in Paris after your long day exploring the Louvre?  Head to Montmartre to sample the Sacred Snails of Sacre Coeur.  Or better yet, rest your feet and satisfy your palate with a Luxury Dinner Cruise on Le Calife!

Love the Louvre? Take a minute to PIN it!