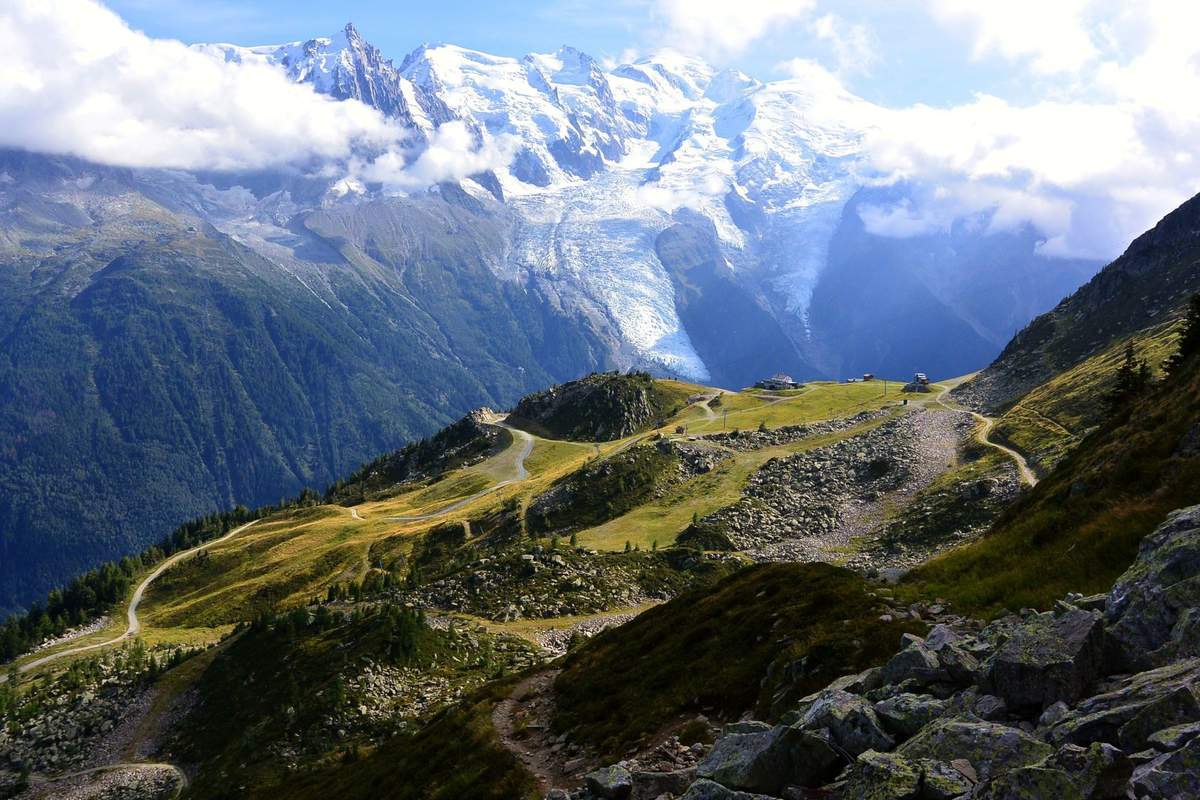 From our vantage on the trail, Planpraz is visible below us. Behind it, the Bossons Glacier extends down the slopes of Mont Blanc toward Chamonix in the valley.

France
September 4, 2015 0
*This site contains affiliate links. If you purchase through these links, we may receive a small commission at no extra cost to you.

The landscape surrounding Chamonix, France is dominated by one of the most famous mountain ranges in the world – the Mont Blanc massif. While Mont Blanc might seem like the star of the show as the highest peak in the Alps, topping out at a rather immodest 4,810 meters (15,781 feet), it’s surrounded by a visual smorgasbord of equally stunning 14ers. In the summer, outdoor lovers flock to the region for hiking in the French alps; in the winter, skiers and hardcore snow enthusiasts descend on these sharply battered mountains to put their skill, and their nerves, to the test. Not surprisingly, it was Chamonix that hosted the first Winter Olympics in 1924, a decision that helped solidify its notoriety as a coveted tourist destination.

During our first visit to Chamonix in January 2015, Travis and I zipped over the border from Switzerland on a whim. Stunned by the jagged needle-sharp peaks and acres of soft, powdery snow, we regretted that we didn’t have winter gear with us, vowing to return while we still lived in Switzerland.

When we found out that two of our friends from the States, Archie and Angie, wanted to visit Chamonix during their two-week vacation to Europe, we were stoked to get another chance to explore the area with them!

Hiking in the French Alps offers some of Europe's most stunning scenery. Use our quick travel guide to hit the trails from Planpraz for mind-blowing views. Click to Tweet

On the day their plane touched down in Geneva, Travis and I arrived in Chamonix early. We hiked up to the Mer de Glace Glacier before meeting up with them afterwards for dinner. They must have been absolutely exhausted after their long flight from California and the 9-hour time difference, but we stayed up chatting most of the night.

Too excited to sleep late, I was up again at dawn, happy to see that the oppressive gray clouds and persistent rain had lifted overnight, with peek-a-boo blue skies flirting from behind the Needles.

It would be a great day for hiking!

Lolling around for a late breakfast, we finally checked out of Camping Mer de Glace before deciding to take the cable car up to the Aiguille du Midi, a peak just barely visible from our campground.

The highest of Chamonix’s Needles, it promised a fun ride in one of the world’s longest aerial lifts, a glass-bottomed room suspended over sheer cliffs at the summit, and unbeatable views of the Alps.

It wasn’t until we arrived at the cable car station to buy tickets that we discovered that children under the age of 3 years aren’t allowed to ride the lift.

Scrapping that plan, we headed to another cable car station, the lift to Planpraz/Brévent. Lift tickets cost a fraction of the price: €17 to ride up to Planpraz instead of €58 for one adult for the Aguille du Midi summit.

Riders also have the option of not getting off the lift at Planpraz, but rather going all the way to the top of the peak to Brévent.

As with Switzerland’s mountains, the French Alps offer a ridiculous number of interconnected hiking trails accessible via a variety of lifts.

The hardest part is typically just deciding which way to go – that, and making sure to catch the last lift down or risk a very long hike back to your car.

Hopping off the cable car at Planpraz, we picked a random trail and set off uphill.

Our only agenda was spotting as many snow-capped peaks as we could, preferably with a cute little tiny baby in the foreground.

In order to make it down to Planpraz for the last cable car back to Chamonix, we had to turn back as soon as we’d finished lunch.

It’s really unfortunate that the lifts don’t operate later in the evening. Five pm is such an early hour to stop hiking. We had hours of daylight left!

As it was, we dilly dallied over lunch long enough that we had to hustle down the trail, anxious not to miss our return ride.

Just above Planpraz, we stopped to watch a paraglider taking off.

I stared, envious, as he took a few jogging steps along the sloping grassy field before the wind caught his chute, sending him gently airborne without a whisper of sound.

A kind stranger snapped one final photo of our group before we took the lift back to Chamonix.

As always, we were already dreading the inevitable goodbye. Though the four of us typically get together for an adventure at least once a year, it’s never enough time. School, travel, and jobs continue to keep us separated, often on different continents.

Urging them not to stay in “smelly ol’ Chamonix” for another night, we finally convinced them to caravan back to Switzerland with us, where they stayed the night.

They were bound for Italy the next day, so it only bought us a few more hours, but it was worth it.  At the very least, we were able to add hiking in the French Alps with Arch & Ang to a long list of memorable adventures we’ve shared with them as the Fabulous Four.

Like this content? Take a minute to PIN it!
Know Before You Go
Map of Planpraz Hiking in the French Alps
439 shares