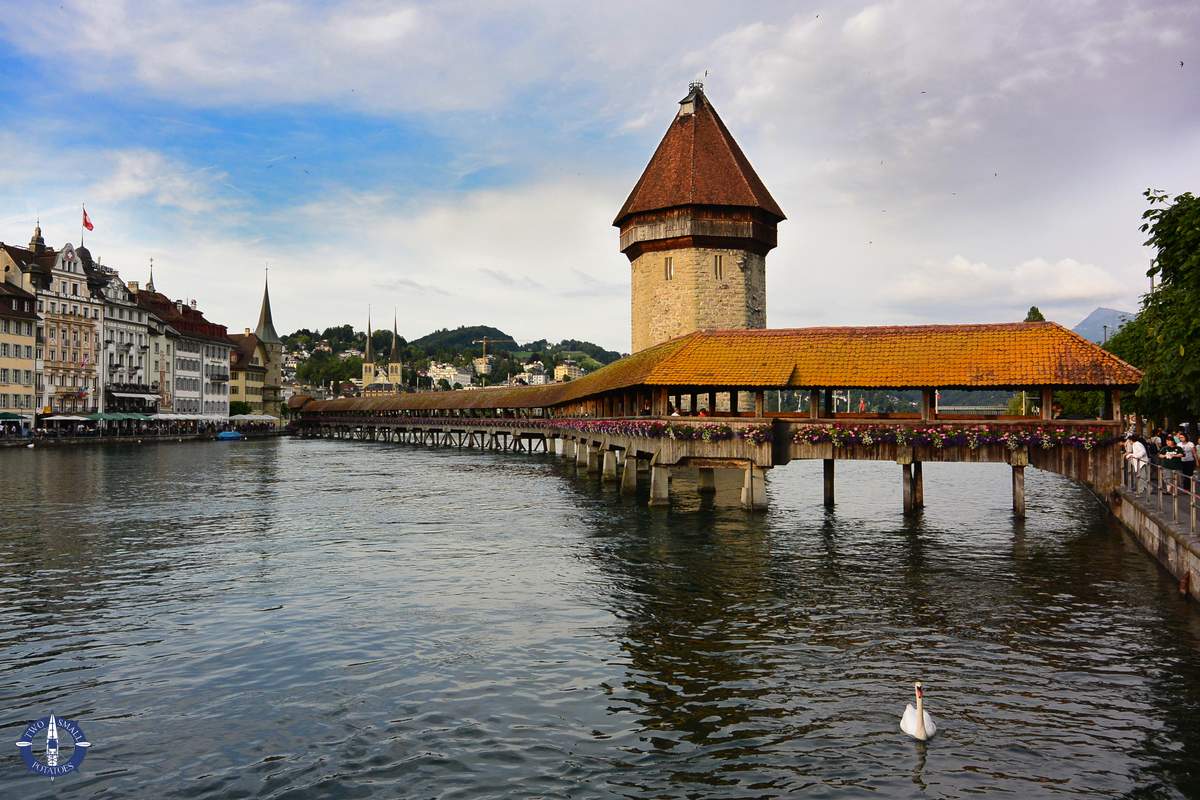 Discover the Best Things to Do in Lucerne, Switzerland 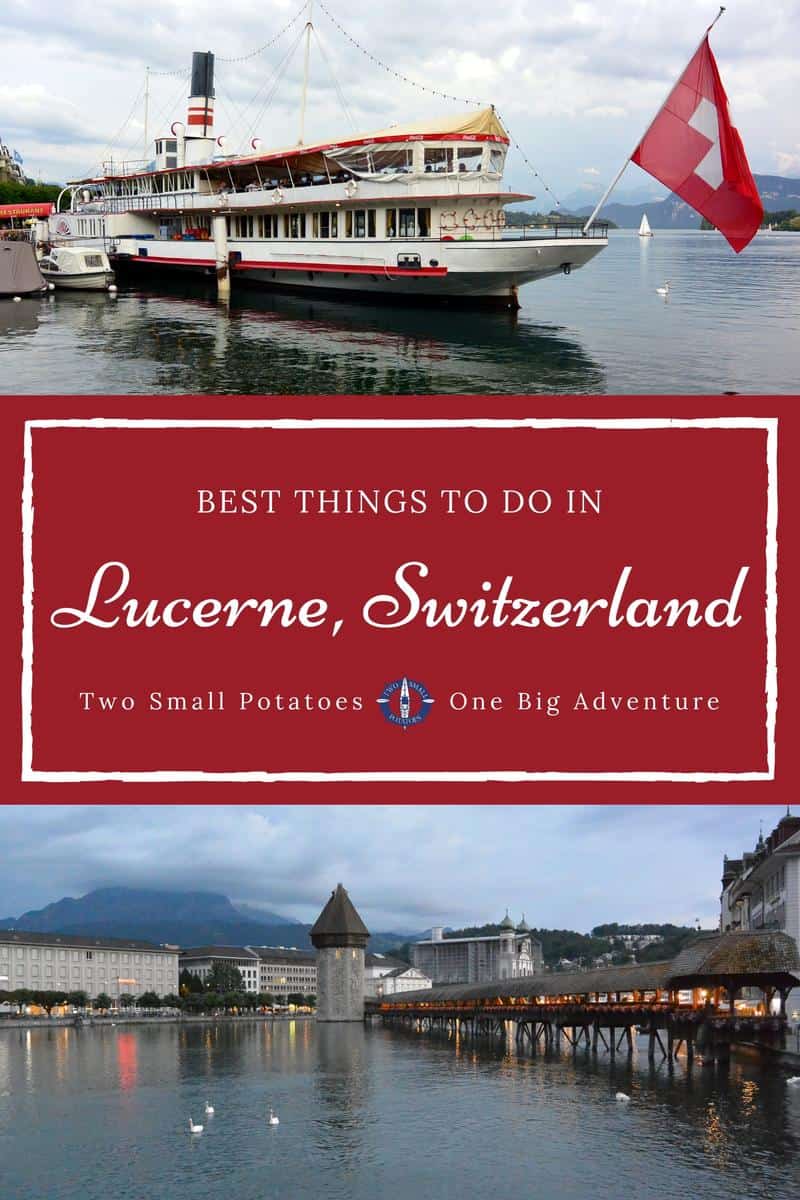 A year ago, we were in Hawaii on a family vacation during my birthday. It still feels crazy that a year later, we’re now living in Switzerland! We can drive just a few hours to so many neat things, sometimes the only hard part is deciding where to go. Since my big 3-7 fell on a Saturday this year, we headed out of town for an unplanned weekend. We packed the car with our camping gear, snacks, and our dog and hit the road. My birthday itself became a day trip to Lucerne, one of the most beautiful towns in Switzerland.  If you have a chance to visit, this is our short list of some of the best things to do in Lucerne.

Discover the best things to do in Lucerne, Switzerland. Cross the historic Chapel Bridge, take a boat tour, and visit the tragic Lion Monument. Click to Tweet

By car, Lucerne is just over an hour from Bern and about 40 minutes south of Zurich. For those arriving in Lucerne via Geneva, Bern, or Fribourg, we recommend bi-passing the main highways to take a more scenic route through the UNESCO Biosphere Entlebuch. It’ll add a bit of driving time, but it’s worth it!

The UNESCO Biosphere Entlebuch is one of about 700 biosphere reserves worldwide and has held its status since 2001. It covers 394 square kilometers.

The biosphere reserve is really easy to access from Lucerne. In just over a half hour, you can leave the city and be surrounded by lush meadows, moorlands, and pockets of forest at the foot of the Alps. You really have to travel off the motorways and railways to really experience Switzerland!

When you’re ready to exchange tinkling cow bells for a slightly faster change of pace, head to Lucerne. The town of 81,000 sprawls along the northwesternmost branch of Lake Lucerne and extends up the mouth of the Reuss River, which drains water from the lake.

Originally built in 1333, Chapel Bridge is the oldest covered wooden bridge in Europe. That’s a pretty nifty honor to bear!

Plus, at 170 meters long, it would still be cooler than most covered bridges even if it weren’t the oldest in Europe.

Midpoint along the zig-zag in Chapel Bridge, the structure crooks near a large octagonal tower called Wasserturm. The name, Water Tower, was given for no reason other than that the tower stands in water.

At one time, the pretty tower was used as a torture chamber. Thankfully it’s now closed to “visitors,” if you know what I mean.

Though one wouldn’t expect it, Chapel Bridge in Lucerne is also famous for its art.

In particular, it’s unique for a series of 17th-century triangular paintings located along the inside of the bridge’s walkway. Just look up and you’ll see them at the apex of the trussed roof.

Originally the bridge had 158 paintings that showed scenes of the Catholic Church and of the patron saints of Lucerne.

However, a fire in 1993 thought to have been started by a smoldering cigarette destroyed much of the bridge and all but 47 of the paintings. It was rebuilt after the fire, but you can still see scorched wood where some of the paintings once were.

The cornerstone for the church was laid in 1666, and construction began the following year. It was largely finished by 1677.

Though it’s still famed as the first large Baroque church in Switzerland, parishioners no longer flock to its beautiful pink and white elegant interior. Instead, now it’s visited mostly by tourists and music lovers who come for concerts in the sanctuary.

Not only is Lake Lucerne the fourth largest lake in Switzerland, but its many deep and twisted arms resemble a fjord more than a lake.

Mountains ringing the lake rise steeply from its shores, providing stunning views from the many bridges and boardwalks in town. A stroll along the shore’s promenade is an absolute must.

Those wanting a bit of active adventure in the water can launch their canoes, kayaks, or SUPs for a leisurely paddle.

The water is typically cold year-round and very clear, which offers good diving and swimming for those willing to brave the chill. Windsurfers should head to the southeast part of the lake near Isleten where the fierce wind through the Reuss Valley creates ideal conditions.

The city of Lucerne curls around the very northwestern tip of Lake Lucerne’s long and winding shoreline, spilling right down to the lake’s edge. An ideal way to see the true beauty of the area is to book a boat tour of the lake on one of the many routes available.

The main boat terminal for tours is located right in Lucerne across from the central train station. Visitors can also hop on board in the towns of Beckenried, Brunnen, Flüelen, Meggen, Vitznau and Weggis, depending on the route or package booked.

Many of the routes and companies offer significant discounts for holders of a Swiss Half Fare Card, Interrail Global Pass, Eurail Global Pass, Tell-Pass, or Saver Day Pass. If you have any of these Swiss travel passes, make sure to bring them.

Companies offer everything from strictly short boat tours on the water to dinner cruises and packages that include a guided trip to one of the nearby alpine peaks, typically Mount Pilatus or Mount Rigi.

One of the more popular boats you’ll likely see in town is the Wilhelm Tell. The distinctive boat is a historic paddle steamer from 1908. It now serves as a floating restaurant permanently docked on Lake Lucerne.

Stroll along the waterfront and branch off a side street to investigate the impressive Church of St. Leodegar, where one manner of church or another has been present since the 700s.

Once owned by the Habsburgs, the church officially transferred ownership to the town of Lucerne in 1433. A fire in 1633 destroyed much of it, but it was later rebuilt.

While perhaps not as impressive as many European churches, it provides a peaceful escape from the touristy bustle in this part of town. Make sure to wander around the church exterior, where a colorful jumble of cemetery flowers and headstones line picturesque arched colonnades.

Just a few blocks from the church is the Löwendenkmal, or “Lion Monument.”

Carved into a sandstone cliff face above a reflecting pool, the monument is a statue of a lion pierced by an arrow. It bears the words, HELVETIUM FIDEI AC VIRTUTI: Swiss faith and virtue.

The monument is a memorial to the hundreds of Swiss Guardsmen who died defending King Louis XVI. They valiantly fought to protect him during the storming of Tuileries Palace in Paris during the French Revolution in 1792.

Vowing to fight to the end, the Swiss surrendered only upon the orders of the King. Many were put to death upon surrender.

A visit to the site led Mark Twain to summarize it well.

The Lion lies in his lair in the perpendicular face of a low cliff — for he is carved from the living rock of the cliff. His size is colossal, his attitude is noble. His head is bowed, the broken spear is sticking in his shoulder, his protecting paw rests upon the lilies of France. Vines hang down the cliff and wave in the wind, and a clear stream trickles from above and empties into a pond at the base, and in the smooth surface of the pond the lion is mirrored, among the water-lilies.

Around about are green trees and grass. The place is a sheltered, reposeful woodland nook, remote from noise and stir and confusion — and all this is fitting, for lions do die in such places, and not on granite pedestals in public squares fenced with fancy iron railings. The Lion of Lucerne would be impressive anywhere, but nowhere so impressive as where he is.

Those looking to find a unique gift or keepsake from your travels will want to head to Lucerne’s shopping district.

The city’s historic center is located along the banks of the Reuss River, where small squares are connected by cobblestone streets. This area is car-free, so plan to use public transit here or walk.

If you can, time the end of your day in Lucerne with the last rays of the sun as they’re disappearing beyond this beautiful town.

With the evening light painting the sky and water shades of orange and black, Lucerne looks every bit a medieval city. You really can’t go wrong with a day trip there. Even if you don’t do any of the things on this list but just explore on your own, you’re bound to find a ton of fun Lucerne things to do.

Take a minute to PIN it!
14 shares