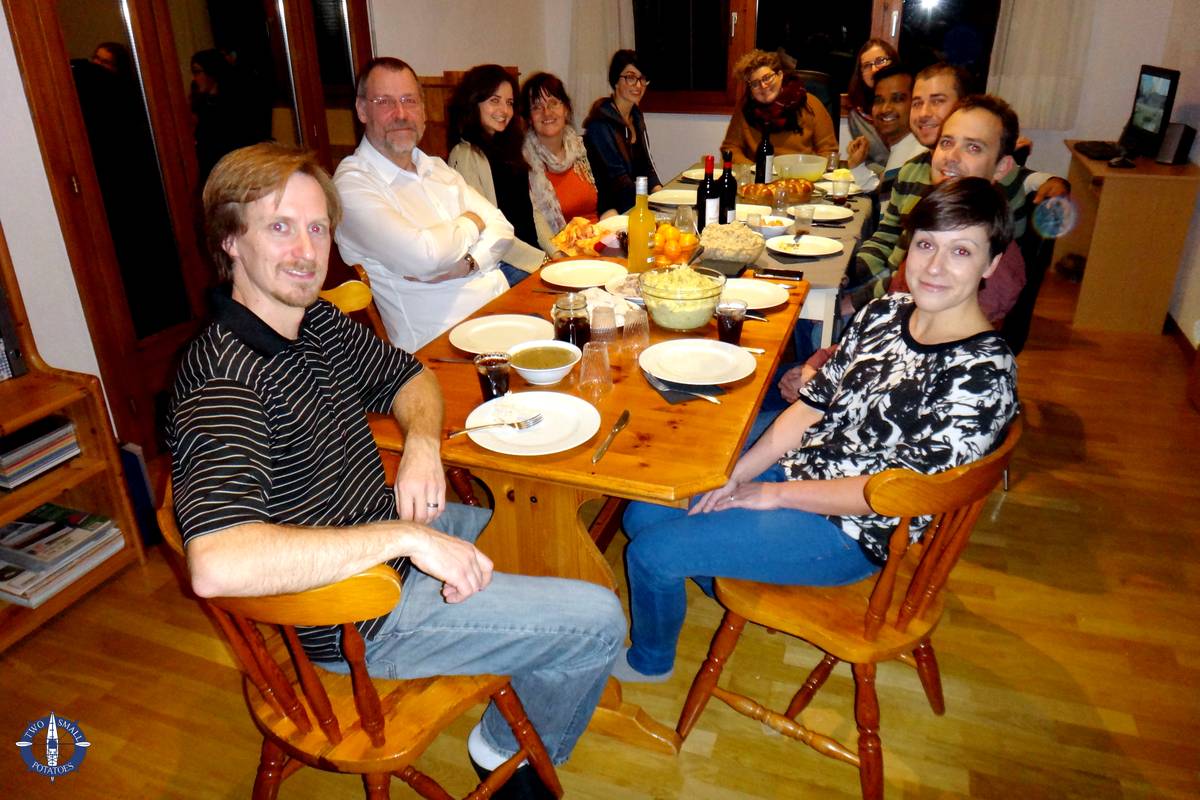 Thanksgiving in Switzerland, 5000 Miles from Home

Expat Life in Switzerland
November 27, 2014 6
*This site contains affiliate links. If you purchase through these links, we may receive a small commission at no extra cost to you.

Trav and I debated whether to host Thanksgiving in Switzerland this year. In the States, we always tried to celebrate with family in North Idaho, even when we lived in different states and had to drive 10 hours to get there. During years when we couldn’t make the long journey, we would get together with friends for the holiday.

This year, with all of our family in the US and us here in Europe, we weren’t sure we were up to the challenge of recreating the holiday on foreign soil.

Ultimately we decided to go for it. We’re so glad we did. It will always be one of the most memorable Thanksgiving holidays we’ve ever had!

As anyone who’s cooked Thanksgiving dinner knows, it’s a crazy amount of work.

We had never been so ill-prepared to host a large dinner party as this year, and it was ten-fold more stressful without the many things we always take for granted back home.

The logistics alone were challenging.

We’re still using partial sets of dishes and silverware donated to us by our neighbor when we first arrived. We have a table that seats six, max. And we didn’t even have a single large pot for boiling potatoes, rice for stuffing, or for apple cider.

Luckily, our friend Rana came to the rescue the day before Thanksgiving. She loaned us several pots, an extra pie plate, a whisk for gravy, and a 9″x13″ pan for rolls.

On top of that, she took us to a Turkish store near her house, where we finally found a pan that was large enough to cook the turkey (for only seven francs!), superb Granny Smith apples for pie, and black olives that actually taste like our favorite California olives, though with the pits intact.

There’ll be no sticking black olives on all 10 fingers for us this year.

With our arms loaded down with wine and all of our purchases, she gave us a ride home from town so we didn’t have to lug all our stuff on the train.

We were so grateful.

How do you find a turkey for Thanksgiving in Switzerland?

Since Thanksgiving isn’t a Swiss holiday, turkeys aren’t readily available from the supermarket, particularly in the size that we required. We needed a turkey that would be big enough to feed about 14 people but that would still fit in our oven, which is very small.

We checked a bunch of grocery stores anyway and couldn’t find any whole turkeys, not even small ones.

Friends came to the rescue again!

Rana and her husband Jack ordered a 7-kg turkey from his cousin and made arrangements for it to be delivered right to our door early on Thanksgiving morning. Slaughtered that very morning, it was definitely the freshest turkey we’d ever had. It was also the most expensive, coming in at just under $100.

The turkey that arrived was a couple of pounds lighter than we expected, which was perfect, because the slightly smaller bird just barely fit in the oven.

When we first starting making Thanksgiving dinner years ago, we did it the old-school way – long and tedious hours of basting.

Eventually Travis discovered cooking bags and we never looked back. They make for a super juicy turkey. Since Thanksgiving isn’t a holiday in Switzerland, cooking bags are as non-existent on the fourth Thursday in November as whole supermarket turkeys.

Old school, it is.

Trav’s plan of action was to rotate the turkey 90 degrees every 20-30 minutes to prevent overcooking where it was closest to the heating coils.

Making all the traditional side dishes for Thanksgiving in Switzerland also proves challenging.

In the USA, it’s traditional to stuff the turkey with bread stuffing. Trav and I both prefer rice stuffing though, so we made that instead.

We always prepare the rice stuffing separately and serve it with the turkey, but not cooked inside, so he stuffed our Swiss turkey with baby onions, rubbed it down well inside and out with a special mixture of herbs, and threw the bird in the oven to slow cook for 5-6 hours.

We couldn’t find brown rice like we normally use, but we bought what we thought was fairly similar.

We realized we a problem when it quickly congealed into mush in the pan.

So much for that.

One of our neighbors came to the rescue and gave Trav a box of rice with instructions to let it soak for several hours on very low heat, then add his other ingredients.

Though it didn’t have the fluffy texture of what we’ve always used, it was more edible than our first batch of gloop. Apparently I’ve taken our boring old brown rice for granted.

We always have bacon and green beans with garlic, onions, and lots of spices.

This year we used canned rather than fresh green beans. Before we even cooked them, they were dark green and unexpectedly mushy right out of the can. They at least tasted better than I expected, but oh what I would have given for several big jars of the ones my mom used to can.

My mom cans the best green beans in the world!

The next near fiasco was the gravy, which Trav typically makes.

Since we haven’t been able to find corn starch, he set out to make homemade gravy from the turkey juice with just flour. It failed to thicken and stayed a ghoulish gray color – not turkey gravy at all.

I offered to take over, added more flour, spices, and more turkey juice, and somehow it thickened into a perfectly tasty mixture.

It was a Thanksgiving miracle, I tell ya.

We cheated and instead of making homemade bread, we bought the only thing I could find that resembled our customary dinner roles. Like pretty much all Swiss bread, they were good!

Trav whipped up a tasty batch of garlic mashed potatoes while I finished the gravy and pies.

You’d be hard pressed to find an American household not serving pies for Thanksgiving dessert. Fruit pies are some of the most common, especially apple, as are pumpkin and pecan. Popular cream pies include chocolate, banana, and lemon meringue. Cheesecakes and carrot cake are less common but still make the rounds.

Travis and I both love strawberry/rhubarb pie, so I made one of those, as well as a classic American apple pie.

The only fruit pie that’s better is huckleberry, which is also traditional for us since we’re from North Idaho where wild huckleberries are plentiful. Normally we have a big stash canned or frozen from the fall, but they’re not readily accessible in Switzerland. We would have loved to share a homemade huckleberry pie with our friends.

And now for the most important part of Thanksgiving in Switzerland: friends!

We borrowed an extra table, chairs, plates, and silverware from our friends, Carlos and Nicole, and we were all set.

Guests brought plenty of wine, chocolate, snacks, and even a candle as a gift.

The group was a fun mixture of friends we’d met from different places. Most didn’t know each other, and yet everyone got along as if we were all old friends.

It was pretty amazing.

One of the neatest things was that Trav and I were the only Americans, so it was fun and new to share our holiday with a group of folks who were experiencing Thanksgiving for the first time. They asked questions about the origin of the holiday and about things they’ve only seen in American movies.

Even the post-Thanksgiving dinner clean-up is better with friends.

After dinner, I was surprised to see several of our guests in the kitchen washing and drying dishes.

I tried to usher them back to the party, but they just smiled and continued cleaning –  and snapping each other with dish towels – until the kitchen had been largely put back together.

I thought back to all the holidays when my mom or my mother-in-law spent the entire day cooking, only to have dinner dishes to also clean up afterwards. I’ve never seen guests pile into the kitchen like that to pitch in. This is definitely a tradition more Americans need to adopt.

Uhhh, or maybe just our families?

After dinner, our tradition of giving thanks turns into a special moment.

Another loose tradition we have is to go around the room before or after dinner and allow each person a moment to give thanks. Typically it’s for things like your health, family, job, friends, etc.

Several times throughout the evening, one of our guests mentioned she’d seen this tradition in American movies, so after we’d all finished strawberry rhubarb pie and vanilla ice cream, we put everyone on the spot and opened up the floor.

We were touched by the outpouring of gratitude to us for hosting dinner.

We apparently should have been more clear that giving thanks didn’t carry an obligation to heaping praise on the hosts though. Haha!

We were especially touched when our friend from Lebanon spoke. She shared with the group that before she’d met us, she had pretty negative feelings toward the USA. Pretty understandable considering the long and often ugly history between our countries. She acknowledged that we had changed her feelings about Americans and said she was grateful she had the chance to get to know us and become friends. It was a special moment for us.

Once everyone had a chance to share, we were struck by the common thread we heard around the circle. We were all grateful to have connected with such an interesting, unique, and diverse group of people.

After many bottles of wine and too many Long Island Iced Teas, the party finally wound down at around 2 am.

Yet again, our new friends here have surrounded us like family, saving us from what otherwise could have been a very lonely Thanksgiving in Switzerland, over 5000 miles from home.Save

You can find more random musings about expat life in Switzerland below.