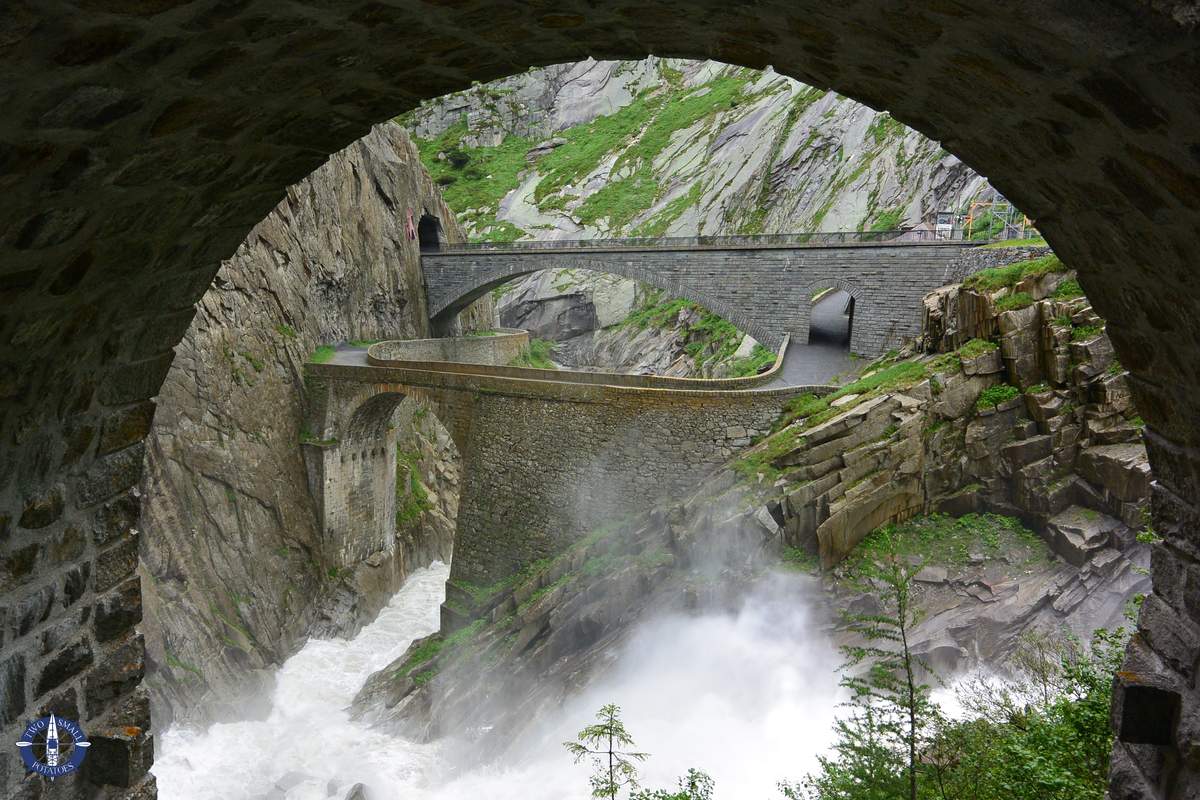 Brave Switzerland’s Teufelsbrucke Bridge, Made By the Devil Himself

Bridges & Arches
June 14, 2015 4
*This site contains affiliate links. If you purchase through these links, we may receive a small commission at no extra cost to you. 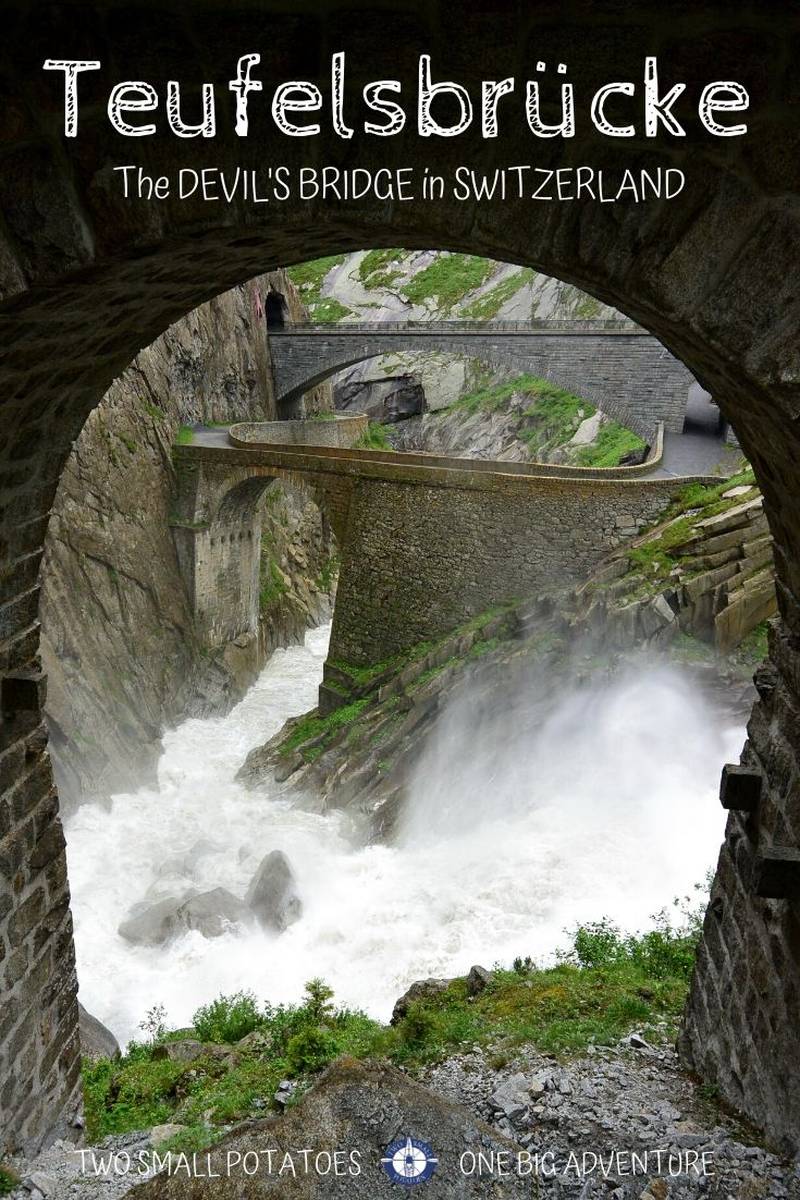 Tucked away in the Adula Alps, a unique and rather obscure attraction awaits adventurers in Europe. Known as Teufelsbrucke, the Devil’s Bridge in Switzerland has existed in one form or another since the year 1230.

The original wooden bridge was rickety and would’ve been terrifying to cross high above the raging Reuss River. It wasn’t dubbed the “Devil’s Bridge” until the 16th century, when a second bridge made of hardier stone replaced the original. Repeatedly damaged by the turbulent river and the harsh conditions in the Schöllenen Gorge, subsequent engineering projects led to multiple bridges over the centuries.

Now, the Teufelsbrucke in Switzerland is actually three old stone bridges that criss-cross the Reuss River and each other. Behind them, bright red Swiss passenger trains and a raging waterfall create one of the most stunning backdrops you’ll ever see.

Do you know the legend of Teufelsbrucke, the Devil's Bridge? Visit this offbeat attraction tucked away in a stunning gorge in southern Switzerland. Click to Tweet

How do you get to Teufelsbrücke (Devil’s Bridge) in Switzerland?

Not the way we went, that’s for sure!

According to a random tourism website I found about Teufelsbrucke, the bridge is only about an hour by car from the city of Lucerne.

The day before visiting Teufelsbruecke, we celebrated my birthday with a day trip to Lucerne. We spent a memorable night (but not in a good way) Camping at Lake Lucerne. From there, we expected to be able to easily make the drive straight to Devil’s Bridge.

Turns out, the website for Teufelsbrucke was totally wrong.

We followed their directions to the exact position on the map to the little town of Amsteg, Switzerland. We parked, got out and looked around. Though we were in a gorgeous valley along the Reuss River with cascading waterfalls and steep mountains, the bridge was nowhere in sight.

We decided to explore up a side valley to see if that road would lead to the bridge.

But while we didn’t find the bridge, we did find one of the coolest roads we’ve driven in Switzerland. Climbing up into a forested canyon along the raging Kärstelen Creek, the road narrowed to one lane in places with hairpin curves cut right into the mountainside in a series of curving tunnels.

High above the canyon, we drove for some time before finally turning around and returning to the town of Amsteg to try again.

Once back in Amsteg, we found what looked to be the correct location for Teufelsbrücke on navigation, so we tried again, beelining straight for the town of Andermatt.

Be prepared for road closures.

Now, on a good day, the town of Andermatt, Switzerland is only about an hour from the southern end of Lake Lucerne. Unfortunately, we hit a series of road closures with no clear detour to get to Andermatt.

What we didn’t know was that a landslide had blocked the main highway, and it was simply impassable. In lieu of any kind of electronic signage to inform drivers though, officials merely used orange tape to put a giant “X” over Andermatt wherever it appeared on road signs, including the sign we’d seen back in Amsteg.

Well, we probably would have gone anyway, but we would have mapped a different route! As it was, Travis navigated us to a lovely – but lengthy – detour around the landslide.

Trying to stay on the curving road in monsoon rains, I felt only bemusement. Knowing that the Swiss can put a tramway up a vertical cliff and plop a restaurant on a pointy 14’er, I could only assume they were having a bit of a laugh when they built the road we found ourselves driving.

We knew our route was as crazy as we thought when we saw it on our navigation.

The Motto Bartola Stüei might be a beautiful road, but it’s not the best way to get to Teufelsbrucke, folks.

Leave time to explore the village of Andermatt.

We were relieved to finally arrive in Andermatt.

Not only did it mean we were getting close to the Devil’s Bridge in Switzerland, but I immediately fell in love with the town! It was pretty deserted when we visited, mostly because of the gloomy, rainy weather, but it just made it more charming.

In winter, this idyllic village of 1500 is a popular ski area. In summer, it hosts hikers and visitors who come to explore the trails, glaciers, and eight alpine passes in the surrounding mountains.

Andermatt is just so perfectly Swiss. It looks like something straight out of a fairy tale. If you have some spare time, we recommend poking around town for a bit before heading off in search of Teufelsbrucke.

Be prepared for more road closures.

The good news is that Andermatt is super close to the Devil’s Bridge. If you make it this far, you’re almost there.

The bad news for us was that just a kilometer from the bridge, we arrived at yet another road closure.

We were so close! Gah!

Luckily, a road employee was stationed in a small booth at the roundabout. Travis hopped out to ask her if there was any way to get to the bridge.

She gave him excellent directions on how to reach a nearby construction area being used for parking. From there, we could walk the kilometer through the tunnel along the train tracks to the bridge. Only car traffic wasn’t allowed.

We were in business!!

Travel Tip: For those visiting in the summer months, it might be better to park in Andermatt. Devil’s Bridge has a small parking area, but it’s limited.

Everything you need to know about Teufelsbrücke – and nearby attractions.

Our first glimpse of Teufelsbrücke was not of the bridge, but of the torrential Reuss River crashing through the craggy Schöllenen Gorge just above the bridge. With spring melt water from the surrounding peaks, it was spectacular.

And at long last, Devil’s Bridge!

The Legend of the Devil’s Bridge

Legend says that the forces of nature were so strong in the Schoellenen Gorge that no man could build a bridge to cross the chasm. Only the Devil himself had the power to achieve such a feat.

So, extracting a promise from the local villagers that the first soul to cross the bridge would become his after he built it, the Devil made good on his end of the bargain. He built the Devil’s Bridge, stone by stone.

But once finished, not a single villager was willing to cross it and sacrifice his soul. Instead, the villagers tricked the Devil, sending a goat across the bridge.

Enraged, the Devil lifted a 220-ton rock, intent on destroying the villagers.

An elderly woman came to the Devil with his massive stone and carved a cross on it in an act of faith. The Devil threw the boulder and his aim was true, but the rock missed its target and landed harmlessly in the valley.

The bridge was saved!

Known as the Teufelsstein (Devil’s Rock), the legendary stone is located a short distance north of the bridge. It was moved from its original position to make way for the construction of the motorway, but it can still be visited near the town of Göschenen.

In 1799 during the Napoleonic Wars, Teufelsbrucke was badly damaged during a battle between Russian and French soldiers as they fought their way through the Alps.

A large memorial carved into the adjacent canyon commemorates the troops who died fighting there.

One final attraction of interest near Teufelsbrucke is the Soldier’s Tunnel.

For those wishing to cross over Gotthard Pass between the cantons of Uri and Ticino in southern Switzerland, locals long ago recognized the strategic importance of the bridge. In the 19th century, a military complex was built in the area to protect the bridge. Part of that involved the construction of a tunnel through the cliff face adjacent to the Reuss River.

If you do the small Devil’s Bridge hike, you can walk through the Soldier’s Tunnel on the opposite side of the river.

The last part of the path crosses back over the river on bare metal grating on a bridge called Häderlisbrücke. Those with a fear of heights can easily backtrack the short section of trail through the Soldier’s Tunnel and cross Devil’s Bridge back to the main road and parking area.

Personally, we loved the bridge. Even though it wasn’t very big or long, it was thrilling and a bit disorienting to see the roiling white water just below our feet.

Since we had hiked to the bridge from Andermatt, we set about looking for a different way to get back to town. Finding a seemingly random set of spiral stairs inside the rail tunnel, we climbed them to see if we could find a different way to hike back.

We ended up on top of the highway and railroad tracks we’d followed to the bridge, which treated us to nice views of the river and crater-topped mountain behind Andermatt as we walked back.

Back at the parking area, an elderly couple stopped to chat with us while we were brewing coffee on our camp stove. With hot drinks to warm our hands and bellies, we hit the road again.

The last stop on my short birthday trip? Vaduz Castle in Liechtenstein!

Know Before You Go
Take a minute to PIN it!
46 shares