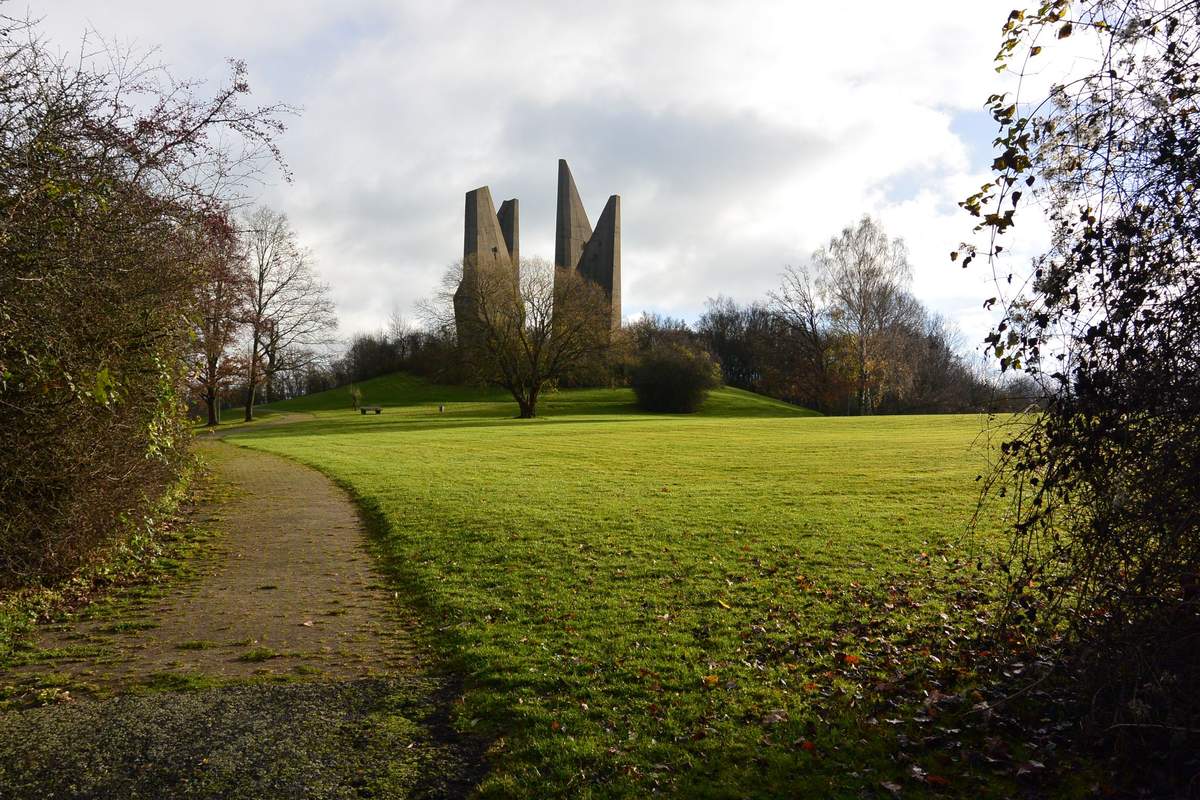 Expat Life in Germany
November 22, 2015 0
*This site contains affiliate links. If you purchase through these links, we may receive a small commission at no extra cost to you.

Once again, Travis and I found ourselves temporarily homeless with our little traveling zoo after leaving the Guesthouse Gut Reibstein.  Since we checked out at 10 am and couldn’t check in to our next guesthouse in Göttingen until after 3 pm, we essentially had five hours to kill.  Normally we’d have no problem keeping ourselves entertained, but the 22nd heralded a trifecta of complications.

Grateful to have a car, we took a drive – randomly and aimlessly – through the patchwork fields,  small forests, and quiet villages that encompass the vast majority of Lower Saxony, our region of central Germany.

Curious about a rather unusual structure on a hilltop above the town of Friedland, we parked the car and hiked up to investigate.

We’d stumbled across the Peace Memorial, a severely imposing set of concrete towers built in 1967.  Since we know only a few words in German, the best we could make of the plaques on the towers was that it was built in memory of the POWs and missing German soldiers from WWII.

I could certainly be wrong, though, since Google Translate does occasionally let us down.

We walked through the memorial to look straight up at the towering columns.  As with several other memorials we’ve seen in Germany, I was curious to know what the artist intended with the design.  It was certainly somber, but also somehow threatening, and despite the pretty surroundings, I left not wanting to return.

Our drive through the countryside and little hike to the Peace Memorial ate up a couple of hours, so Travis suggested we head in to MPI on the off chance someone was in the main building on a Sunday.  We were in luck!

The friendly security guard at the main entrance waved familiarly as we entered (he’s seen plenty of us lately), and we were relieved to make our way to our cozy little spot downstairs in the bistro.  The place was completely deserted, lights off.  But better yet, it was blissfully warm.  We brought in Tica and Touille and set them up in their little beds to hang out while we waited.

Touille happily entertained herself with a new sheep chew toy we’d just bought her while Tica slept.  We’re incredibly lucky they travel so well, and lucky that Simone is caring for Brisco for us right now.  (Simone, if you’re reading this…thank you a million times over!)

As the hours passed, I occasionally glanced wistfully through their giant bank of windows, watching the snow fall peacefully through the trees.  I was grateful we had a place to stay again for a few days and relieved we’d found a warm and dry place to spend the afternoon, but I couldn’t prevent the sadness from creeping in.

Snow means Thanksgiving, Christmas, family and friends, giant feasts and decorations…and home.   The serene landscape was briefly interrupted  by the tiniest of weasels spy hopping vertically from the leafy bushes before scampering back to the safety of the woods.  Even our little weasel friend had a home.