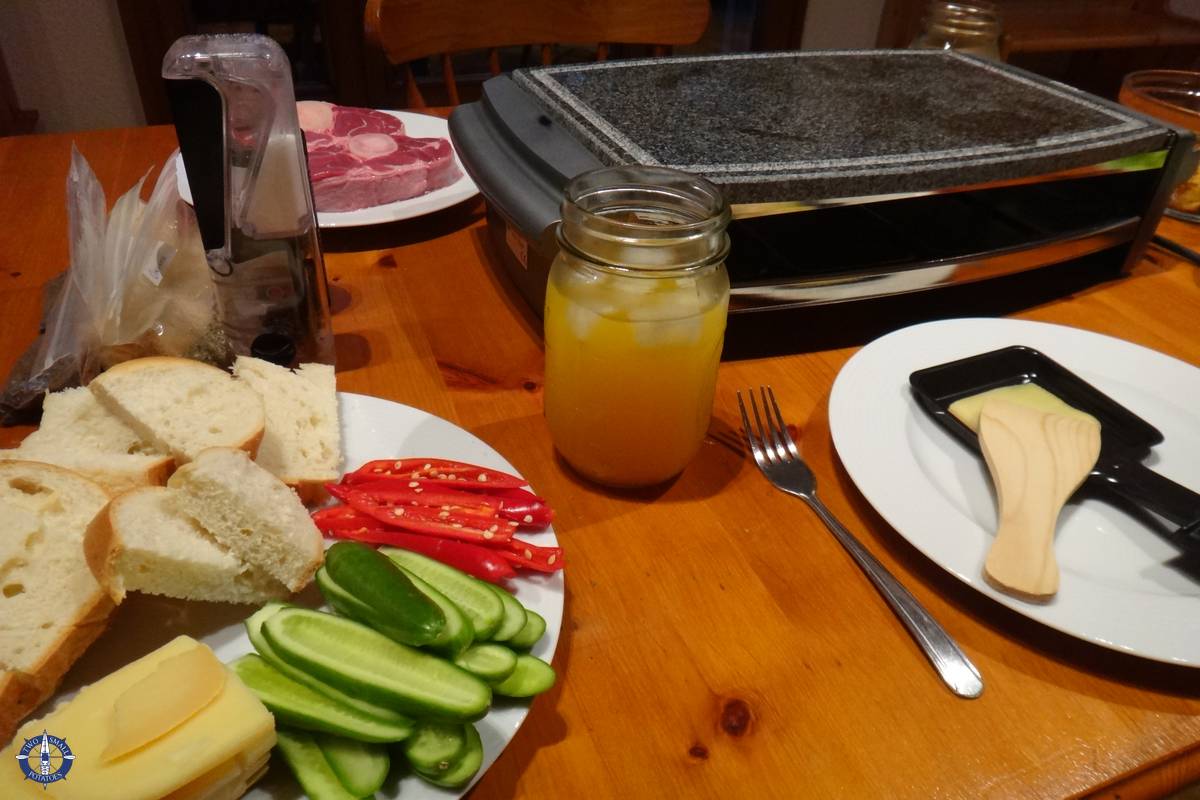 How To Make Swiss Raclette (Americanized) 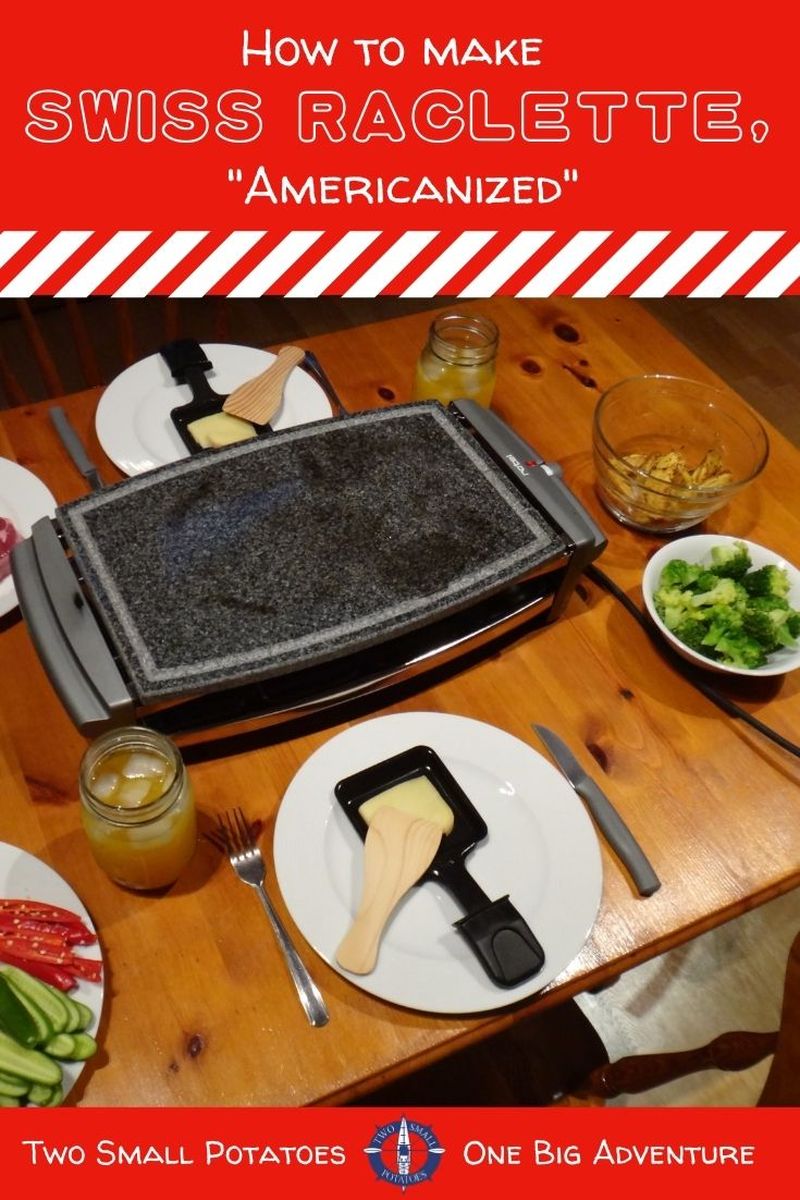 As newly arrived expats in Europe, we quickly learned that Swiss raclette is one of the country’s national dishes, one served with no small amount of pride. I especially adore cheese of all kinds, so I was a fan from the get-go. Travis loves grilling. And we both love melted cheese on just about anything. It was only a matter of time before we bought our own Swiss raclette machine and made it ourselves, albeit slightly Americanized. If you’re wondering about this very smelly but entirely fun and tasty traditional Swiss dish, then read on!

How do you make a Swiss person roll over in their grave? Serve up Swiss raclette - Americanized! Click to Tweet

What is Swiss raclette?

Raclette is both a type of cheese and the dish made with that cheese. It originated in Wallis, Switzerland at least 400 years ago and while it is sometimes confused with fondue, it’s not.

Before the invention of modern raclette machines, raclette cheese was placed next to a wood fire. When the outside melted, it was customarily served with boiled potatoes, tiny sweet gherkins, pickled onions, and sometimes cured meats.

Modern machines are electric. When plugged in, electricity heats a large thick stone slab, which is used for cooking your taters, veggies, and meats. Thick slabs of cheese are placed in small drawers under the heated slab. It melts in the drawers and is then scraped over your cooked foods on a plate.

Where can you buy a raclette machine?

You can typically find raclette grills at department or cooking stores across Switzerland. Since they can be quite spendy and we didn’t plan to ship one back to the US with us, we decided to look for a second-hand grill.

Several weeks ago, Travis saw an ad on the website Anibis.ch (like a Swiss version of Craigslist) for an 8-person raclette grill. At only 40 francs, it seemed like a pretty good deal.

When Travis got to the seller’s apartment, the gentleman apologized and said he’d just realized that day that they were missing one of the eight wooden spoons. Did we still want it for 20 francs?

Of course we did! Cha ching!  Bargain basement deal.

With all of our trips to Emmaus, our favorite secondhand shop in Fribourg, we’re bound to find a replacement spoon eventually. Or just make do without. After all, there’s only two of us.

Before giving our new toy a spin, we had to hit up the grocery store for all the ingredients.

Obviously the most important ingredient is the cheese, right?

Raclette cheese is a semi-hard alpine cheese made from cow’s milk. It’s not meant to be eaten cold, though you can. We should warn you that it’s quite smelly, and it really is better melted.

t’s also often sold pre-sliced. When you see it in the store, you’ll see that the slices are quite thick, not quite a centimeter. Keep this in mind if you buy a block and need to slice it yourself at home. You want it thick.

As we would later find out, if you can’t find raclette cheese, mozzarella, cheddar or any kind of cheese that melts well is also good!

Just be prepared to seriously offend any Swiss folks in the vicinity.

How did our Swiss raclette become Americanized?

For our first attempt, we used raclette cheese. After spotting a large block on sale at the grocery store, we splurged and bought it, along with fresh bread, gherkins, potatoes, and loads of veggies. Basically, anything that sounded tasty with yummy melty cheese drizzled all over it landed in our grocery basket.

When all of our sides were lined out on the dinner table, we realized how much we’d deviated from the traditional Swiss raclette.

Our gherkins turned out to really just be miniature cucumbers because they were fresh and not pickled.

We didn’t get the tiny onions that are apparently traditional.

We did grill spicy red peppers – but they were so spicy I passed them all off to Travis.

We also grilled potatoes, but they were the wrong kind, and we baked them rather than steaming them.

Plus, we grilled the veggies alongside giant steaks, threw in some broccoli for good measure, and replaced the traditional white wine with a new orange juice/rum/Limoncino concoction served in our fanciest Idaho Mason jars.

And with that, I’ve no doubt that Swiss the world over turned in their graves when we fired up the grill.

Despite our many mutations, it was rather good.

Can you tell I’m married to a scientist?

In fact, we liked it more for its mutations, mostly because it’s hard to go wrong with this method of melting individual slices of cheese under the grill right at the table. It’s simply brilliant.

Plus broccoli is apparently scrumptious with any kind of cheese melted on it.

How is broccoli not a traditional raclette item? Do Swiss kids really love their veggies so much that their parents don’t have to drench broccoli in cheese?

Such a strange and beautiful culture, this is.

What’s it like ordering Swiss raclette at a restaurant?

Incidentally, we found out just a few days after our maiden raclette voyage at home.

Some of Trav’s labmates invited us to dinner at the Cafe de l’Ange, a restaurant in Basse-Ville – the historic Old Town of Fribourg.

Someone called ahead for our party of eight.

However, even the Swiss locals in our group didn’t realize we were supposed to pre-order the raclette. With some smooth talking, Trav’s labmates convinced the restaurant staff we were in no hurry that night, and restaurant staff obliged with several orders of raclette – sans the grill.

Instead, they delivered individual plates with a small dollop of melted cheese for each person with continuous “refills.” The potatoes, gherkins, and sides were served in large communal containers.

While it was good, we were disappointed that they left out the most unique thing about raclette – melting your own cheese at the table so it’s hot and fresh off the grill!

I had a most enjoyable evening getting to know Trav’s labmates, though, and despite the hefty price tag, it was well worth it just to be able to meet new friends and socialize. I was only half joking when I told one of the gals that our dinner plans that night were the only reason I had to get dressed all week.

The trials and tribulations of a new expat, am I right?

Turns out our favorite raclette is made at home with friends.

Obviously not tired of raclette, we accepted a friend’s invitation for dinner at their place last night.

Sharing lively conversation in a mixture of French, English, and Polish, we downed a truly surprisingly good bottle of Swiss white wine a friend recommended for us – a Johannisberg from the Valais.

We stuffed ourselves full of melt-in-your-mouth baby potatoes and raclette that was far superior to the cheap “industrialized cheese,” as one of our hosts referred to it, that we had used.

Though their raclette also had a distinctively sharp, raw cheese smell, the texture of theirs was far more creamy, it actually tasted good before melting, and it melted with less grease.

So what did we take away from ingesting almost a kilo of cheese in 3 meals in 9 days?

Want more stories about adjusting to expat life in Switzerland?

Take a minute to PIN it!
2 shares