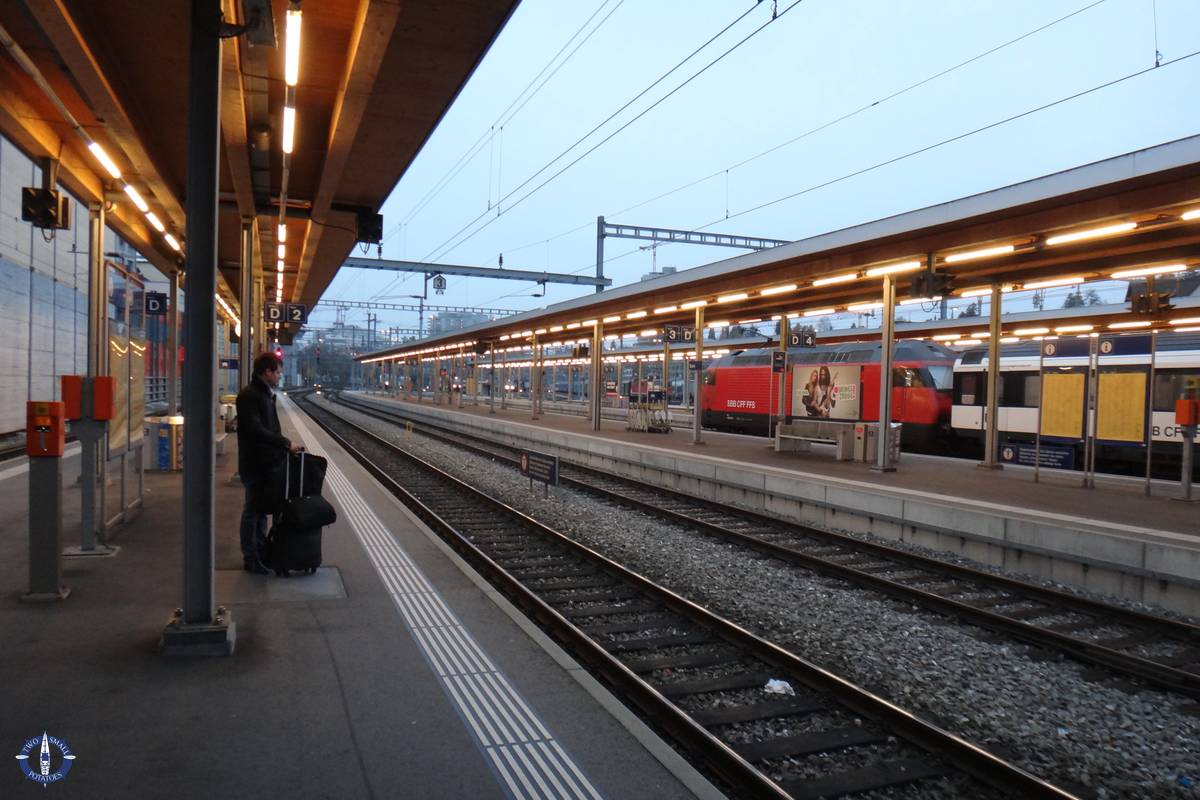 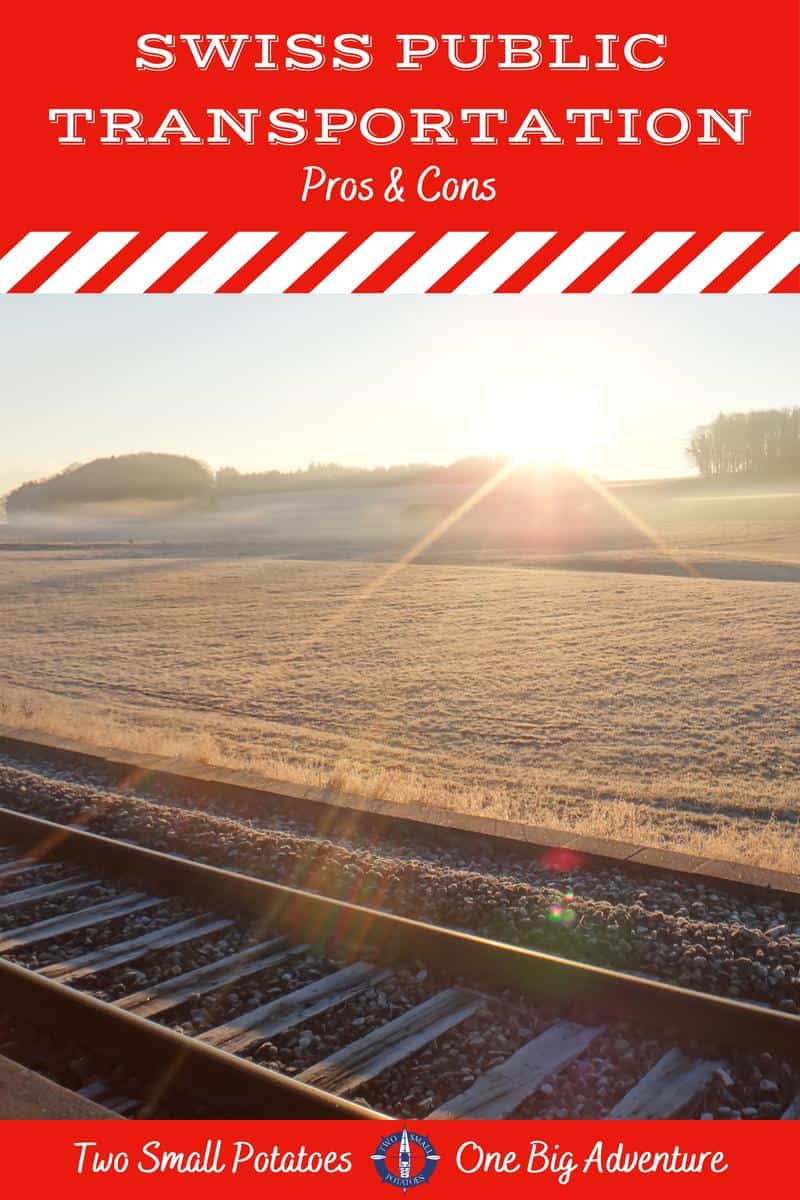 Well, like everything in life, it has its pros and cons.

The Pros of Switzerland Public Transportation

The buses and trains we’ve taken so far in Germany, Sweden, Belgium, Denmark, and Switzerland have been very similar. Since we live in Switzerland, we’ve had the most experience with trains here than elsewhere in Europe.

Swiss trains and buses tend to

Those are all big pluses – like the Swiss flag!

Unfortunately, every coin has a flip side.

The Cons of Switzerland Public Transportation

While there’s no doubt that Swiss rail travel has its charm, public transportation isn’t incentivized and seems best suited for residents who commute.

We continually struggle with the stifling lack of flexibility and high cost of Swiss public transportation. Here’s the skinny on the downsides, as we see them.

Swiss public transportation tends to be the most convenient for people in cities. If you happen to live in a rural area or off the bus line, your only option for getting around might be a car.

We don’t live in a major city in Switzerland. Although we’re only about 11 km from Fribourg, the nearest big town with a population of about 38000, we have limited options to get there via public transit.

The first option is by bus. We have two bus stops, both within a 5-minute walk from our house, but the bus schedule only offers a handful of direct routes from these bus stops into Fribourg throughout the week. Very few late night or weekend routes are available.

Need to go in to work for something late at night? Have a red-eye flight to catch out of Geneva and need to catch a train there? Good luck with that if you don’t live in a city.

The third option is obviously to just drive. It generally wins every time for convenience.

2. Travel time is usually longer with public transportation than by car.

High-speed trains are especially exalted as being the fastest mode of travel in the land. Yet we’ve compared this so many times in Switzerland. We’ll choose a route and compare how long it takes to travel to a specific destination by train/bus/tram/boat vs traveling by car.

One of the biggest reasons is because when sites like Google Maps navigate you from Geneva to Zurich, for example, it gets you from one train station to another. That’s great, but that’s not the entire travel time, unless you happen to live at the station and you plan to just hang out at the destination station.

If that’s your thing, that’s cool. No judgement here.

You have to count the total journey time from departure point to final destination.

For us, we love that once we get to the platform in Rosé, our train ride is only 10 minutes into downtown Fribourg. Awesome!

But a single one-way route from our house to that station typically takes between 30 minutes to an hour, depending on a number of factors.

For example, a recent trip to town to have dinner with friends looked something like this:

It took an hour and 15 minutes to travel a minimal distance that would have taken less than 15 minutes by car.

How much is your time worth?

Most of the time, this same route wouldn’t take nearly as long, but it’s actually quite common for the buses to be late, which means missing the train connection.

If officials really want to encourage public transportation, it should be cheap – and I mean cheap. Not just in Switzerland, but everywhere.

For it to truly be an attractive means of travel for the masses, it should cost less than other modes of travel, particularly if travelers have to sacrifice things like time, comfort, and convenience. On this point, the Swiss public transportation system falls short.

Not only have we found it to be more expensive than other European countries and the US, but rail lines offer a confusing and vast array of ticket options. You can buy discounted or full-fare tickets, travel cards, or travel passes for kids, youth, students (but only between the ages of 25-30), adults, or seniors.

Will your travels be just for a day, monthly, or annually?

Do you need it for a single zone, or multi-zone? This requires knowing the zones where you’ll be traveling before you can even determine that.

If your travels will take you outside the borders of Switzerland, you’ll need a different travel pass than if you just want to explore the country.

One option for frequent travelers within Switzerland who want to simplify buying fare is the annual Swiss GA Travelcard. It comes with the rather ripe price of 3550 CHF ($3700) per year, but it allows travel anywhere in Switzerland on trains, buses, trams, and even boats – with exceptions, of course.

With the purchase of a GA travel card, your partner can buy one for only 2490 CHF.

If this option is beyond your budget or doesn’t meet your needs, you can also consider a Swiss Half-Fare Travelcard. This is what we chose.

For 175 CHF per person annually, the card allows you to travel anywhere in Switzerland and only pay half the price of a ticket.

Even with this discount, it costs us about 75 CHF ($78) to travel round trip to Geneva, which is only 125 kilometers away. Still, the savings add up if you take the train even just a few times.

For commuting to work, Trav also bought a second annual pass that only allows him to travel through three designated “zones” from our house to Fribourg.

4. Travel via public transit in Switzerland has restrictions.

Clearly if you travel with a lot of luggage, you’ll appreciate the convenience that a car offers. But even those who travel light need to be wary of specific restrictions on trains/buses. In particular, dog owners and cyclists traveling with their bicycle need to be aware of the rules and restrictions for this in Switzerland.

Can you take your dog on the train in Switzerland?

You sure can, but it’ll cost you. Small dogs that can be carried on your lap and don’t take up a seat can ride free. But if your dog is bigger than 30 cm, you’re required to buy a Swiss Dog Train Ticket.

Options include a day pass for 25 CHF or 350 CHF for an annual rail travel pass.

The latter also only allows your dog to travel with a single ticket holder. If you and your husband both frequently travel with the dog but not each other, both of you will need to purchase the dog annual rail pass for a whopping 700 CHF.

Are bikes allowed on trains in Switzerland?

You guessed it: yes – sometimes. But it’ll cost you.

You’ll need to buy a Swiss Bike Rail Pass for it.

Options include a Bike Day Pass for 14 CHF, a point-to-point partial half-fare ticket, or an annual pass for 240 CHF. You just need to weigh which option is best for your specific travel needs.

Depending on the route, you might also need to make reservations in advance to make sure the train will have sufficient space for your bike.

Can you take your bike on buses in Switzerland?

Buses aren’t as common or popular in Switzerland as trains are. That said, buses serve many communities that aren’t accessible by train. For the most part, the same rules apply for taking your bicycle on buses as for taking it on trains. Some allow it as long as you have a ticket for it.

The best way to find out if you’re allowed to travel with your bike on a specific bus or route is to check the SBB website or use their cell phone app. If you do an advanced search, look for Carriage of bicycles required (Switzerland only). Buses and routes that are bike friendly will have a little bike symbol.

Unfortunately this isn’t an option on the buses where we live in Fribourg canton. None of the buses are fitted with bike racks on the front. Riding a bike from our house to the train station then is two kilometers on a narrow country road with no sidewalk and no shoulders.

In Oregon, Travis commuted 18 km round trip to work most days on his bike, which was free and safe on bike trails. The bus was also a great option with a bus stop in front of our house and a direct route to the university. Plus his monthly bus pass was free because he was a student, and it was free for him to take the bus with his bike.

5. No form of public transportation in Switzerland can offer the freedom of the open road.

This is the hardest one to explain to city folks, to people who can’t or don’t drive, or to those who grew up strictly in a culture of public transportation.

A recent conversation with a fellow expat friend in Fribourg “drove home” how much driving is a part of someone’s culture. She also grew up in a culture of driving and understands how much we miss it since moving to Switzerland.

Like us, she truly enjoys it – in and of itself – in addition to the benefits it offers.

Travis and I both love to drive. Love it.

It’s a trip to the ocean to go crabbing with friends, windows down to breathe in salty ocean breezes.

It’s a day spent in the Idaho mountains bumping along ridiculous pot-holed dirt roads to go huckleberry picking with family.

It’s photographing grizzlies and wolves at Yellowstone and having a free place to sleep in the desert after watching the bat flight in New Mexico.

It’s a rig crammed with friends, feet hanging out the back window, on a rafting trip in Oregon.

It’s a cheap restaurant with a cooler in the back and meals made from the front seat of the truck on the road.

It’s heading out of town at 10 pm to meet up with friends a state away for a spontaneous camping trip.

It’s every road trip we’ve ever taken – to mountains, oceans, lakes, deserts, national parks, and places many never have the chance to experience.

We are keenly aware that driving is a big responsibility that comes with its own expenses. It’s a luxury not everyone can afford.

For us, having a car is not a status symbol or an entitlement, and the single biggest benefit is intangible, priceless.

So where does that leave us?

But in the meantime, I’m off to catch a train.

Considering international relocation to Switzerland? These articles might be helpful.

Take a minute to PIN it!