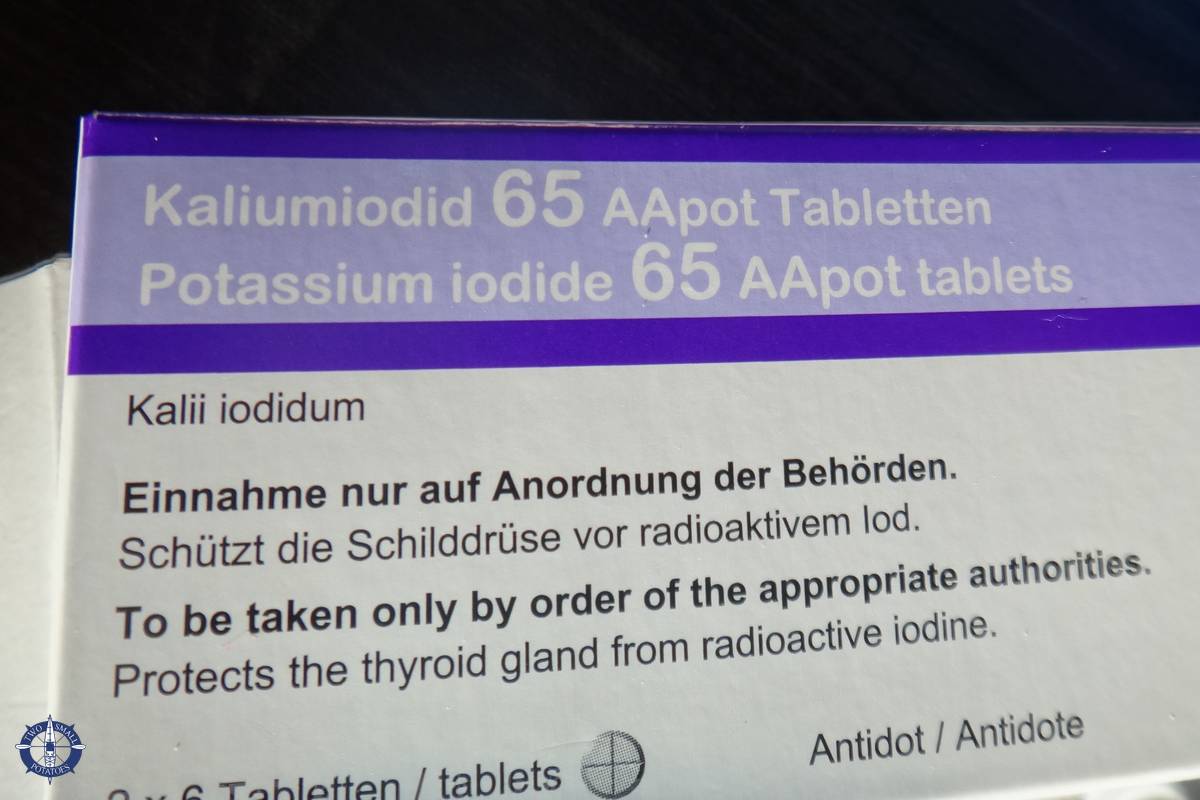 We Just Got Free Nuclear Fallout Pills in the Mail

Will the fun, surprise gifts that arrive in the mail never cease? First it was free postage stamps. Now it’s free potassium iodine tablets in case of nuclear fallout, courtesy of the Armed Forces Pharmacy of Switzerland. What’s the best part of getting nuclear fallout pills in the mail?

Besides that they were free, the pamphlet inside actually came with instructions in English. Total bonus for us as newly arrived expats in Switzerland.

The pills were mailed to everyone living within a 50 km radius of a nuclear facility.

In case of a nuclear incident in which radioactive material is released into the environment, a single potassium iodide pill can be taken to protect an individual for up to 24 hours after exposure. The tablet prevents the body’s thyroid from absorbing harmful radioactive iodine.

We didn’t know any of that until today.

Who knew that we live just 35 km southwest of the nearest active nuclear power plant in Switzerland?

The country has a total of four.

A fifth plant in Vaud about 25 km from us was destroyed by a partial core meltdown in 1969 after only a few years of use. It was decommissioned in the late 1980s.

Japan’s Fukushima Daiichi disaster in 2011 was one of the worst nuclear accidents in history, second only to Chernobyl in 1986. After the disaster at Fukushima, Switzerland’s federal government decided to phase out nuclear energy by 2035.

More recent polls from Swiss citizens, however, reflect that the majority are in support of continued reliance on nuclear power as long as it continues to be “safe” and cost effective.

Most don’t support shutting down the power plants if it leaves the country dependent on other countries for power or if it disrupts current supply. Considering that nuclear power provides about 40% of the country’s electricity, that’s a tall order.

How many nuclear power plants in the USA are there?

Before moving to Europe, we would’ve answered,

For those who live in the western US, nuclear power isn’t something many folks really think about. We certainly never have. The vast majority of nuclear power plants in the US are in the eastern half of the country.

In fact, the Pilgrim Nuclear Station in Massachusetts is over 4,000 km from Eugene, Oregon, where we lived for the past seven years. As one of the US’s easternmost nuclear facilities, this facility is nearly as far from the west coast of the US as it is from the coast of Portugal.

In Oregon, about 70% of electricity comes from hydroelectric power (dams) and other sustainable resources.

Prior to the seven years we lived in Oregon, I lived primarily in Idaho, Washington, New Mexico, and Alaska, of which only Washington has ever had nuclear plants.

In fact, though I grew up hearing my mom talk about her childhood in Pullman, Washington and what it was like to live “downwind” of the infamous Hanford Site, most of its reactors had been shut down by the time I moved to Washington in 1994. By then, it was no longer producing plutonium for nuclear weapons, and the last reactor – Reactor N – went offline in 1987. Still, I’m sure my mom would have appreciated getting free nuclear fallout pills from the government when she lived there.

In 1984, a newer nuclear power facility now known as The Columbia Generating Station came online and has been operating on the Hanford complex for the last three decades. While it was in operation when I moved to Washington, I lived over 350 miles from the plant. I didn’t even know it existed or that it was cranking out 10% of the state’s electricity.

In total, the US currently has about 60 nuclear power plants with 99 active reactors in 30 states. These plants provide 20% of the electricity for the entire US.

The map of plant locations is pretty astounding, with the vast majority falling east of the Mississippi. It’s just one more nail in the coffin for the entire eastern half of the country.

But seriously, Oregon is where it’s at, yo!

No need for nuclear fallout pills there.

How far do you live from the nearest nuclear power plant?

Share in the comments below, and make sure to let us know which plant it is.

We have more personal stories about adjusting to expat lifestyle in Switzerland.