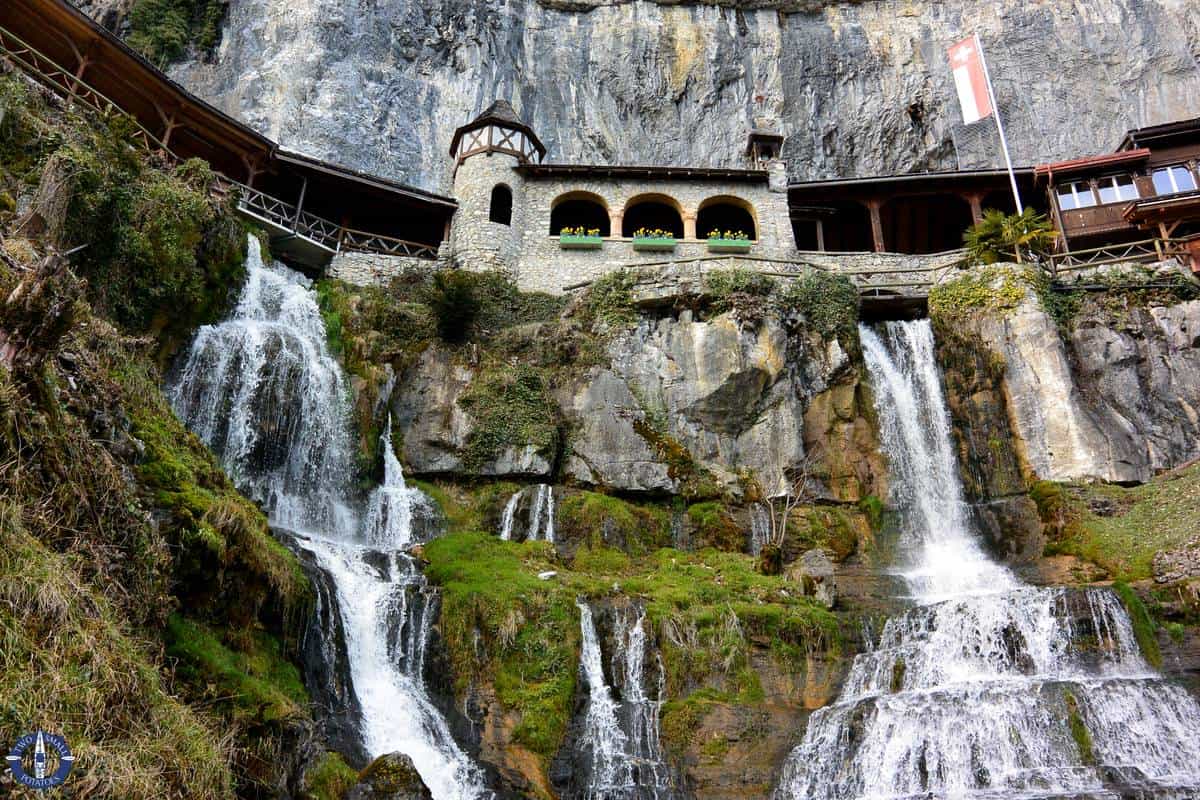 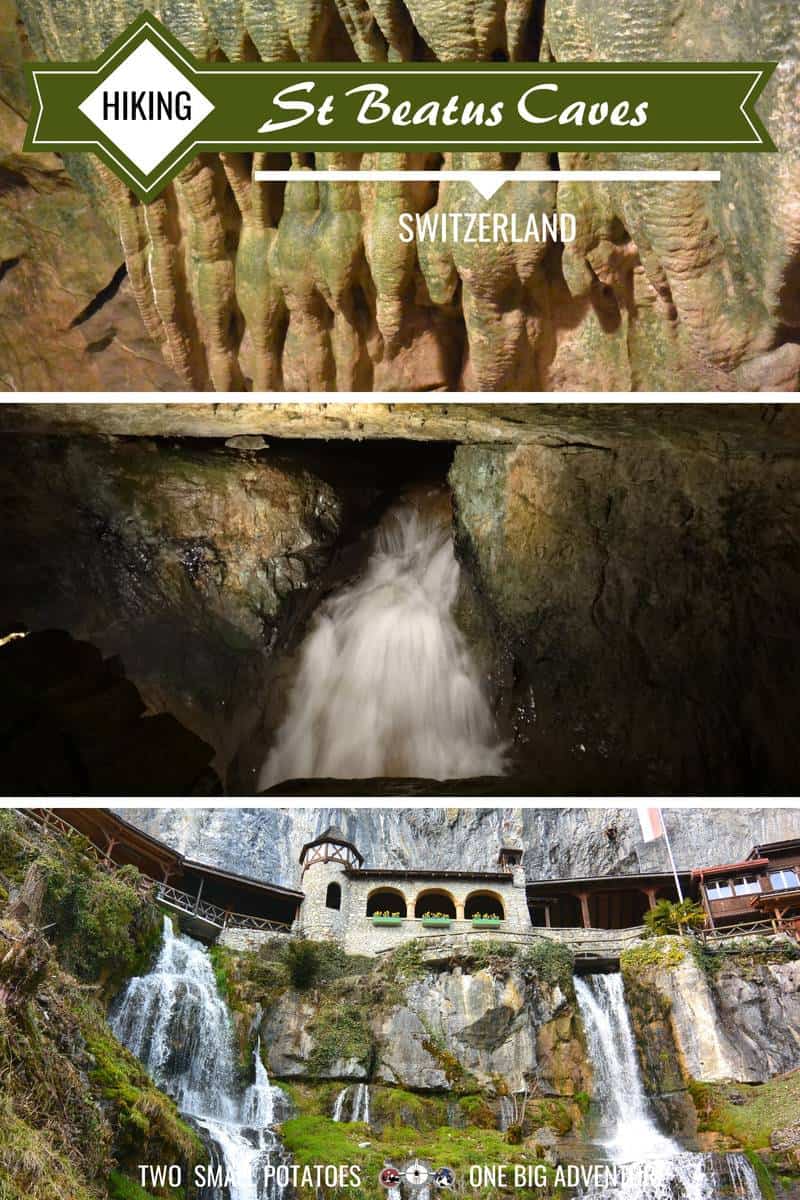 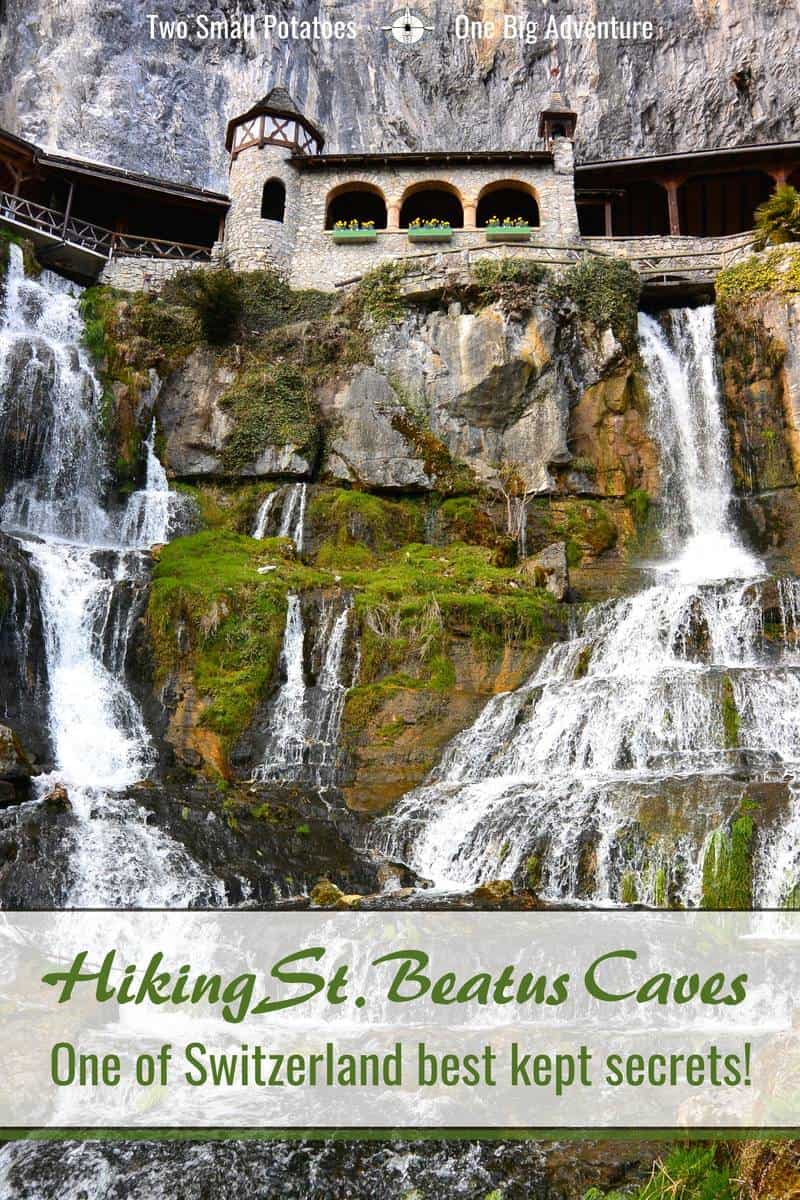 Where does one go hiking when the weather heads south? Also south – underground to hike St Beatus Caves, one of the most overlooked hidden gems in Switzerland.

Even if you’ve visited lots of other caves before, these are unique. They’re so much more than “just a cave.” The cave system extends into a mountainside in the Swiss Alps overlooking Thun Lake, so the setting is insanely gorgeous. Water flows out of the cave, coursing down the slopes in a series of cascades before flowing into the lake.

Visitors can hike the trail leading up to the caves, enjoy a beer and snacks at the cafe with sweeping alpine views, visit the small museum, and kids will have fun in the dragon-themed play area.

The best part though is hiking in the caves themselves, where you’ll follow the underground creek past surreal black pools of water and thundering waterfalls inside the mountainside. It’s an absolute must-see if you love adventure travel and nature and you happen to be anywhere near Interlaken, Switzerland.

St Beatus Caves is one of Switzerland's best kept secrets. Find out everything you need to know before you go! Click to Tweet

Travel Tip: In Switzerland, the caves are called St Beatus-Höhlen.

Where is St Beatus Cave located?

After several weeks of pretty spectacular sunny weather in our little Swiss valley, we knew our luck couldn’t hold out. But we were still bummed when the weekend arrived and the sun fled, bearing gloomy gray skies and rain.

It was our roommate Gintare’s birthday weekend, and her husband had flown in from Lithuania to spend a day or two exploring Switzerland before heading off to Italy. Despite the poor weather, we wanted to do something active, something outdoors.

First picking up Ana, a friend of Gintare’s, the five of us headed to Saint Beatus Caves.

From Fribourg, it’s just over an hour east by car. If you’re coming from that direction, you’ll pass through the picturesque little village of Thun, winding your way slowly along the narrow, twisting highway bordering Thun Lake (Thunersee).

Plan on a 2-hour drive if you’re arriving from Zurich and a 2 1/2-hour drive for those visiting from Geneva.

From Bern, it’s only about 45 minutes.

Where can you park near the caves?

When you arrive at the attraction, you’ll see signs for it along the narrow two-lane highway.

During our visit, the highway, parking area, and cave system were virtually deserted. But during the summer, it can be easy to miss the turn into the parking area. If the parking area is full, you’ll need to drive a ways to turn around and see if the other parking area has slots.

Parking is free in both lots.

How do you get to the cave entrance?

The entrance to the cave is located high above the highway and parking area. You can access it via a wide, paved trail. The total distance from the nearest parking area and the cave entrance is only a few hundred meters, though it is all uphill.

Travel Tip: If you don’t want to go inside the caves (which costs money), the trail up to the entrance is free and open year-round. It’s worth it just to go up and enjoy the views over lunch at the restaurant.

Our first glimpse of the entire complex literally made us stop in our tracks.

Standing near the parking area at the lake’s edge, we angled our gaze up, up, and up the steep mountainside. Cascades of water festooned the slopes in waterfalls spilling from high above. It looked like the entire mountainside was moving water.

As you climb the short trail up the hill, zigzagging with several switchbacks back and forth across the falls, the view grows ever more spectacular.

We passed a tree carved with a face in it, then rounded one final turn that brought us right to the cave entrance.

A mischievous, grinning woodland gnome greets visitors along the trail.

Waterfalls tumble beneath walkways on the trail and spill down the hill into Thun Lake.

Grab some lunch or a drink at the restaurant.

By the time we reached the top of the falls, the gray skies had given way to streaks of slightly more friendly white clouds and pockets of blue sky.

We poked around the cave entrance and then sat in the warm sun, soaking in the view over a plate of piping hot french fries and a “dark” Swiss beer that tasted suspiciously like Bud Light.

Our hungry bellies appeased, we finally ventured into the cavern’s black, gaping maw.

The Legend of Saint Beatus

The cave is named for Beatus, a saint of unknown origin. He likely came from England, Ireland, or Scotland and traveled to Helvetia (Switzerland) to spread the gospel of Christianity in the early ADs.

Local legends describe a fearsome, fire-breathing dragon that lived in the cave when St Beatus arrived on the mountain.

Determined to defeat Ponzo, the affably named but evil dragon, St Beatus raised his Holy Cross before the great beast inside the cave.

A gate at the caves shows Saint Beatus defeating Ponzo the Dragon.

Vanquished, the fiery dragon flung himself into the lake in a rage, making it boil and seethe.

Saint Beatus settled in his new mountain home, where he remained until death finally claimed him in his 90s. Or at age 112 as one legend claims.

Though the cave system is navigable for 12-14 kilometers, only the first kilometer is open to the public.

While it’s largely paved, it’s also narrow in places, has steep stairs, and the trail follows stretches of raging water. If you’re claustrophobic or afraid of the dark, this trail is not for you.

If you’re not, you’ll love it!

As we entered the cave and the light faded behind us, I expected the sound of the roaring water to fade. We’ve hiked in caves before that offered tantalizing glimpses of subterranean streams, only to have them quickly disappear back into the darkness, leaving us with only the quiet drip, drip, drip of water droplets on the ceiling.

St Beatus Caves proved to be an entirely more spectacular beast with regards to subterranean water!

The entire hike never deviated far from the roar of water rushing near us between layers of rock and the crash of underground waterfalls.

At times, the sound of the water was so loud we had to shout to be heard above the racket.

After being accompanied by the incessant pounding of water for quite some time, I was relieved when we were able to find reprieve in a quiet chamber away from the din. I stood mesmerized by a limpid black pool perfectly mirroring the surrounding stalagmites without a single whisper of wind to break the stillness.

Entering a much larger chamber with an immense lake stretching into the shadows, we passed the roughly 40,000 year old Koh-i-Noor stalagmite.

Meaning “Mountain of Light,” the stalagmite is said to be named after the Koh-i-Noor diamond, which was once the largest diamond in the world.

As we neared the end of the public trail, we entered a huge cavern with a giant waterfall cascading through a fissure in the rock.

Spaghetti stalactites dripped from the ceiling.

Two smaller waterfalls cascaded from an adjacent wall into a separate basin with no visible exit.

Continuing in a series of stairs past the falls and through the grotto to a vantage high above the ground, the trail allowed us superb views of the falls and formations.

Wending its way a short distance further, the trail abruptly ended in yet another spectacular cavern with huge sheets of flowstone, fascinating drapery, and impossibly thin stalagmites as tall as a person.

Fun Fact: How can you easily remember the difference between a stalagmite and stalactite? A stalactite grows down from the ceiling so it has to hold on “tite.” A stalagmite grows from the ground, so you “mite” sit on it.

We turned and headed back, taking nearly as much time on our return journey to admire the formations from a new angle.

Briefly stopping to appreciate the columns and stalagmites reflected in another serene pool at Captain’s Grotto, we finally arrived at the cave exit very near where we had started.

Blinking against the bright light of day, we merrily waved goodbye to Ponzo the Dragon, leaving him to stand guard over his cave as we headed back down the trail.

Know Before You Go
Take a minute to PIN it!
1.2K shares