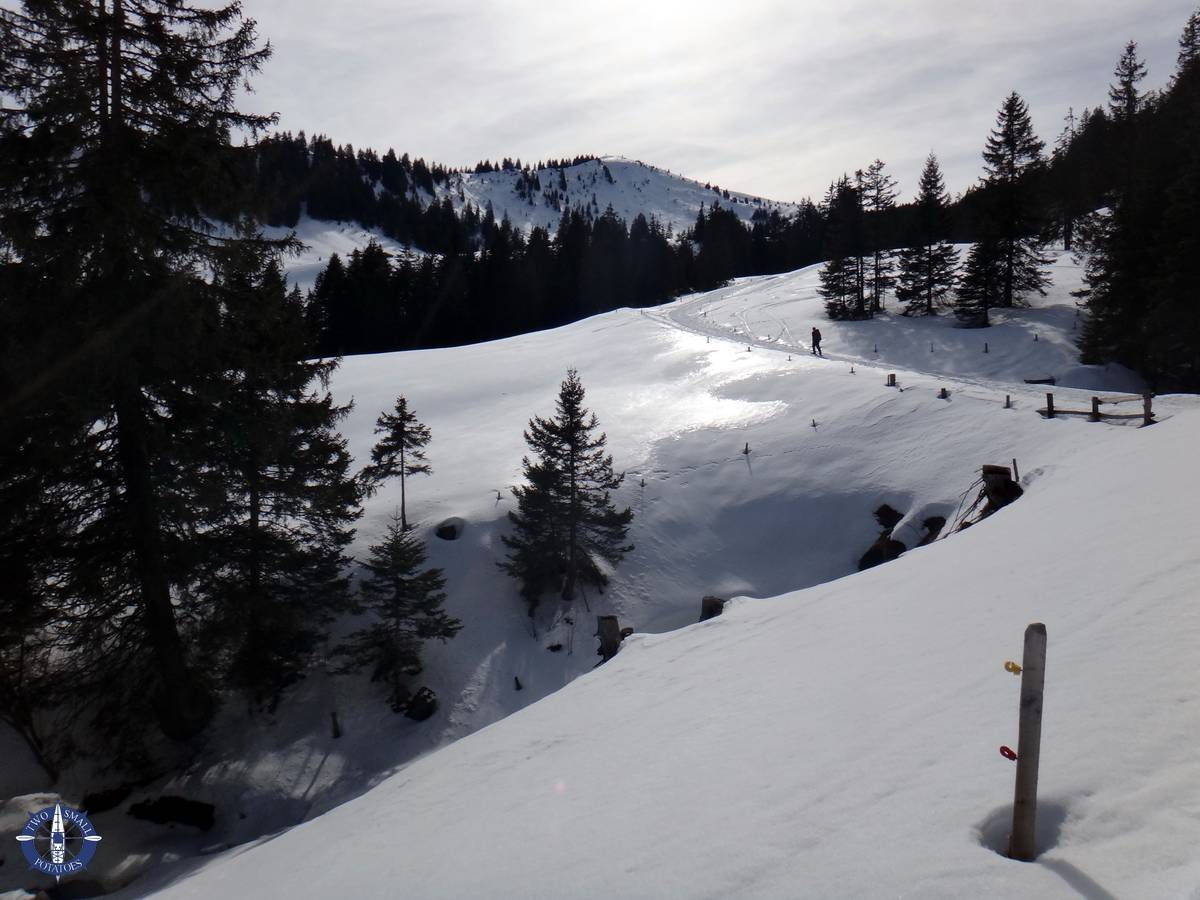 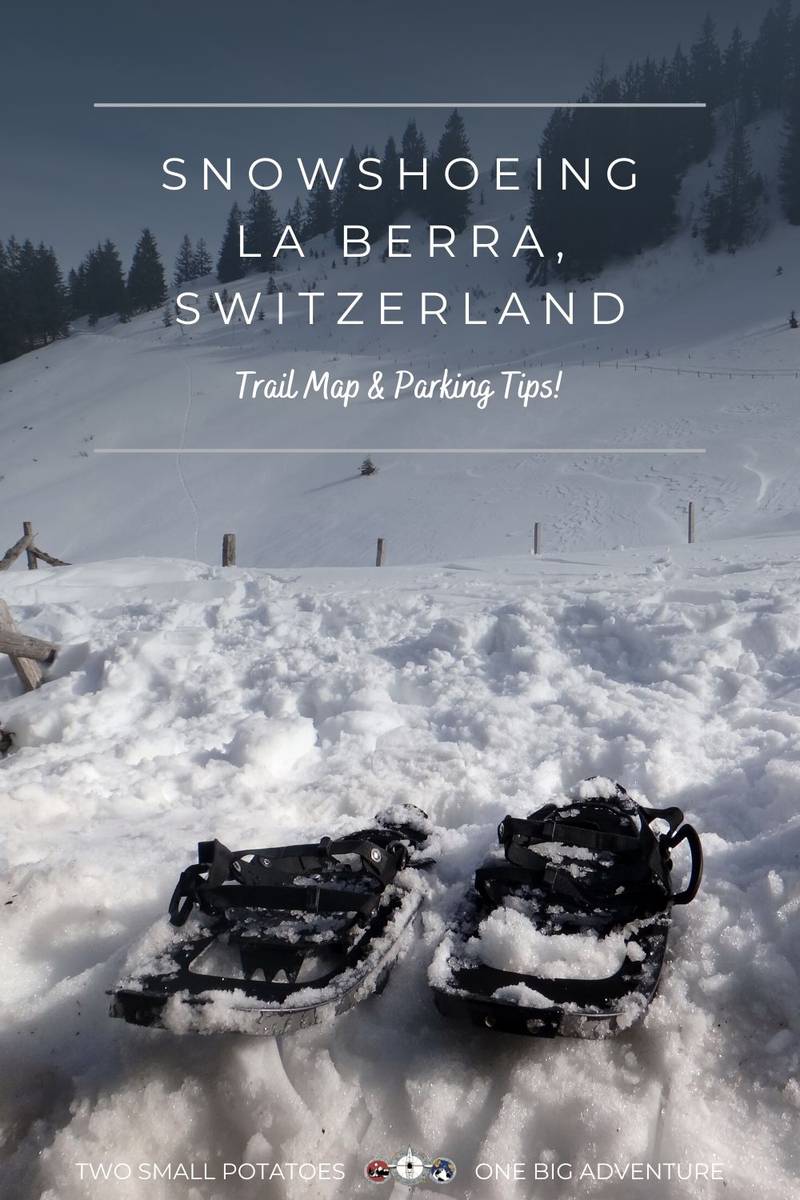 While living in Oregon, Trav and I went snowshoeing for the first time as adults.  After just one trip, we were hooked! We immediately appreciated what an inexpensive sport is is, accessible to most anyone. All we had to do was rent or purchase used snowshoes, and our only additional cost was a partial tank of gas shared with friends willing to carpool to a wilderness destination. With the Cascade Mountains in our backyard, we had no shortage of superb trails and spectacular views for snowshoeing. In Switzerland, we’ve once again found ourselves living in the midst of mountain ranges that offer excellent winter hiking opportunities. Snowshoeing La Berra near Fribourg is a great option for newbies or those just looking for a stress-free adventure in gorgeous surroundings.

Wondering where to go snowshoeing in Switzerland? Check out our trail map and parking tips for the La Berra ski area! Click to Tweet

After our experience Moonlight Snowshoeing at Schwarzsee, we knew we would be doing more snowshoeing in Switzerland, so we decided to invest in our own gear.

We scooped up a pair of discount Crivit snowshoes at Lidl for 50 CHF and were stoked to find a second pair at Emmaus, our favorite local second-hand store, for only 50 CHF. The tags were even still on them.

We don’t know anything about the brand Crivit, but the pair came with a nice carrying bag and crampon covers. Plus they have a really nice kickstand footrest for more easily climbing slopes, which will come in handy here.

The second set is a pair of Yukon Charlie’s 7000 series with wickedly large and sturdy crampons. Interestingly enough, the brand hails from a company in Plymouth, Massachusetts – the good ol’ USA. I haven’t seen the brand elsewhere in Europe, and I can’t help but wonder if an expat lugged them all the way from the States before donating them, unused, to the thrift store.

With our VW weighted down with our new snowshoes and enough snacks for a 4-day road trip (our destination was 25 minutes away), we headed for the mountains.

Since I was in charge of navigating – always a bad idea – we didn’t end up where I thought we would.

We’ve already agreed that if we ever find ourselves on the Amazing Race, I’ll be the calm, insanely-cool-under-pressure, crazy driver while Travis militarily and efficiently barks directions using language I can understand: “Turn right!” not “Turn east.“

Clearly turning right is always turning east for those of us who are directionally impaired.

Anyway, I ended up directing him to the back side of La Berra, the peak we intended to snowshoe, instead of to the little village of La Roche, with its ski lift, shops – and civilization.

As I continued to direct him down ever narrower roads with pavement giving way to ice and snow, he shot quizzical sideways glances my way until we finally came to a bridge where the plowed road abruptly ended.

A handful of cars were parked haphazardly along the end of the road with a couple of folks getting into their car with snowshoes. I had no idea where the top of the mountain was or where we were in relation to it, but we figured it was as good a place as any to head out for snowshoeing La Berra. 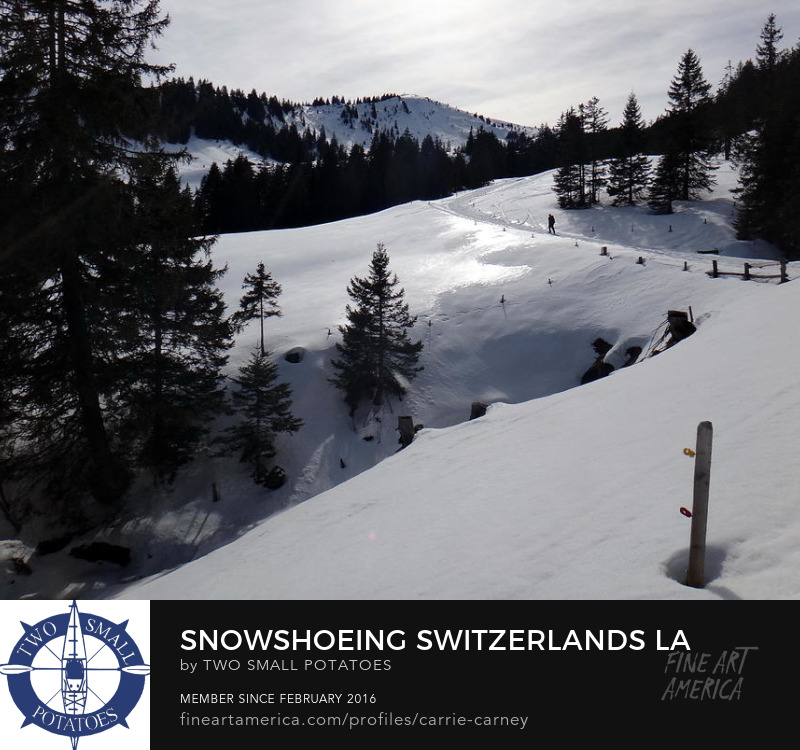 No sooner had we laced up our snow boots and strapped on our snowshoes than Trav realized he’d forgotten his jacket and I’d forgotten my hat and gloves at home.

Luckily, we had enough snacks in the car for a 4-day road trip though!

We resolved to pack better next time and set off up a wide trail leading from the parking area. Within a half hour of steady uphill trekking, we’d already left behind splotchy bare ground for rolling slopes of pearly snow.

We passed several mountain huts, all securely shuttered for winter, then finally stopped to enjoy our lunch at a hut sporting the charming name, Fillistorfena.

Languishing on the stone steps of the cottage in the warm spring sun, we savored our PB&Js made with the last of the homemade jam from Trav’s mom that we’d brought with us from Oregon. 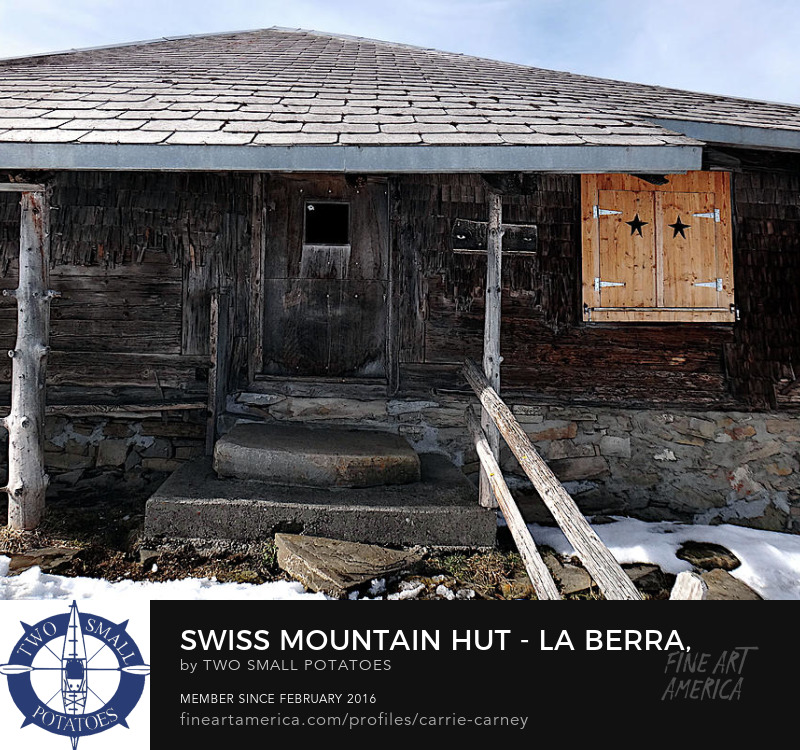 Much of the trail parallels fence posts that farmers will once again adorn with electrified wire when the snow melts and the cows return to the high alpine meadows.

Using Trav’s innate sense of direction, we honed in on the top of La Berra.

Each time we came to a logical place to angle upward towards it, our trail was blocked with bright green trail tape, wooden posts, and signs that read “STOP – Zone de tranquillité” with silly deer and bird drawings.

We left the cartoon animals to frolic in peace in their zone of tranquility and continued uphill, always uphill.

As we entered a long, sweeping bowl ringed with an unbroken mountain ridge, we debated about whether to push on toward the distant ridge and try to complete a full loop back down into the valley, not knowing if the trail circled back or if the route was even possible across the river below.

With daylight fading fast, the temperature dropping noticeably, and Travis without a jacket, we regretfully opted to turn back.

But not before spending some time playing in the snow, throwing snowballs for Touille to chase!

Finally turning back toward our car and home, we turned left and snowshoed off into the sunset.

If so and you have any questions, drop them below in the comments and we’ll get back to you!