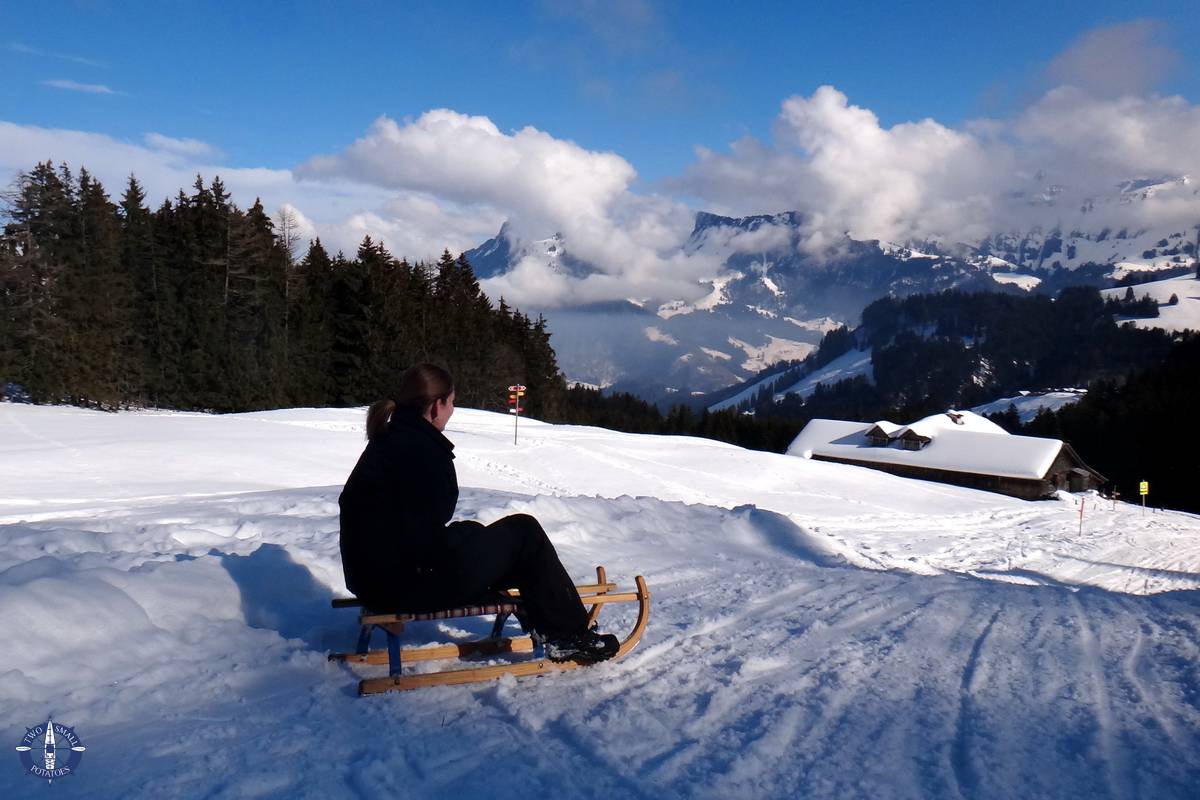 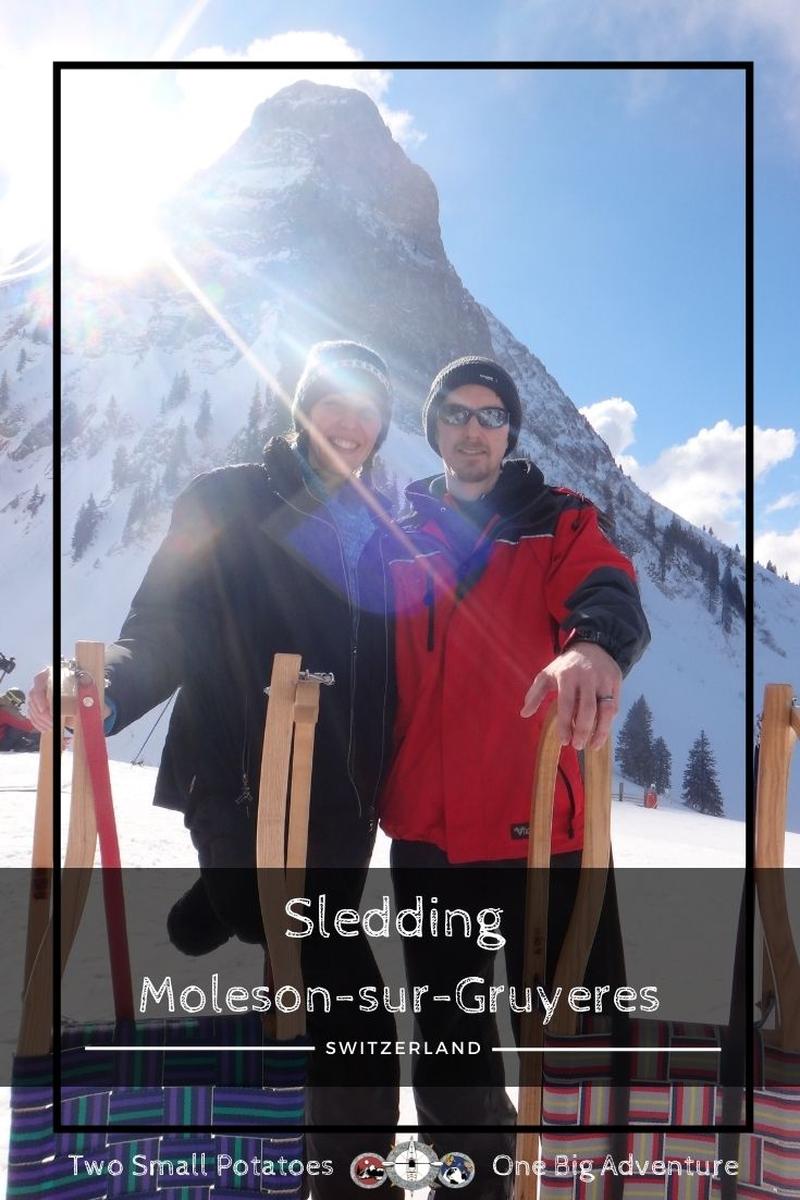 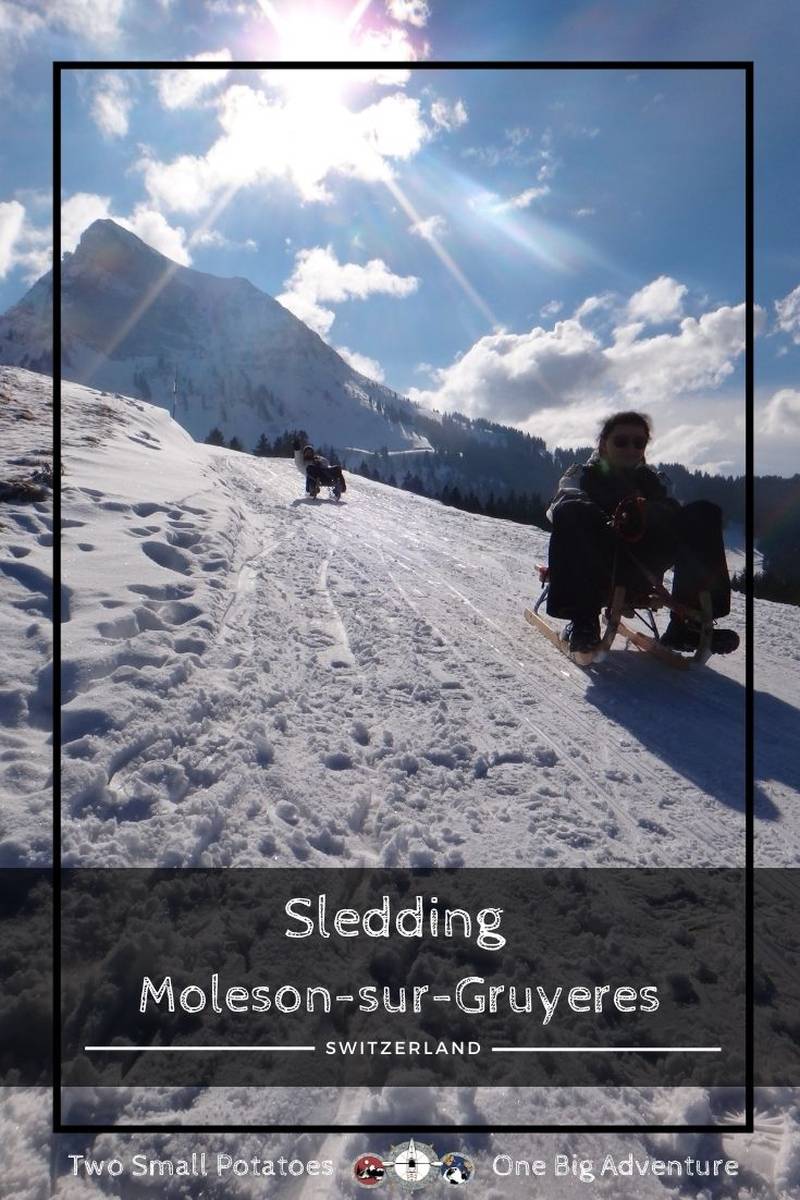 When howling winds and blustery snow flurries signal the arrival of winter, outdoor enthusiasts in Switzerland flock to the slopes. Locals and tourists alike seem immune to the tooth-numbing cold that drives the more faint of heart indoors at this time of year. We recently discovered first-hand that the locals can definitely deliver on their promise of some pretty spectacular winter activities in Switzerland, not the least of which is sledding. For those wondering where to go sledding in Switzerland, we recommend Moleson for a hair-raising good time!

Love breakneck speed? Try sledding in Switzerland! The killer 4-km run at Moleson will make you laugh so hard, you might pee a little. Click to Tweet

“But sledding is only for kids,” you say.

Perhaps if they’re daredeviling Whovenile delinquents – or maybe you just have one too many – because sledding in Switzerland is elevated to an extreme sport, one clearly intended for adults and not just kids.

Fun Fact: The word sledding is an American term that describes the act of sliding downhill on a wooden or plastic object, typically in the snow. In Europe, it’s more commonly referred to as sledging. You might also hear it referred to as tobogganing, especially in regions in Canada or when the sled is narrow, wooden, and curls upward in the front.

What do you call this where you live - sledding, sledging, tobogganing, or something else? Make sure to tell us your region/country! Click to Tweet

Everything You Need to Know About Sledding at Moleson

The day that Travis and I went sledding at Moleson, we had already spent the morning touring La Maison du Gruyere cheese factory nearby. We were so excited about an afternoon on one of the best and longest toboggan runs in Switzerland that we arrived an hour and a half early at our sledding destination, Moléson-sur-Gruyères.

While waiting for our friends to show up, we investigated a promising snowshoe trail near the parking area, built a snow fort and our own sledding track, and Travis briefly took a nap in a snow bank.

The man can sleep anywhere.

Where is the Moleson sledding run located? What’s the best way to get there?

Moleson mountain is located in Fribourg canton. By car, it’s less than an hour southwest of Bern, an hour and a half northeast of Geneva, and just over two hours southwest of Zurich.

Taking public transportation requires a combination of regional or high-speed trains, buses, and walking. Driving is definitely the easiest and fastest way to get there.

Parking is free at the Parkplatz at the base of the mountain – the same place where you’ll buy tickets and rent sleds.

Sometimes it can be confusing trying to find exactly where you’re supposed to go for a destination like this. In Switzerland, it’s not uncommon for a region, a town, a peak, even a canton all to have the same name.

Just to clarify then, Le Moléson is the French word for the name of the actual mountain peak you’ll be sledding. In English, it’s just referred to as the Moleson. The village at the foot of the mountain is called Moléson-sur-Gruyères, which is also the name of the sledding/funicular ticket office. Even more things in the area are just name “Moleson.”

Make sure to navigate to the Moléson-sur-Gruyères inclined railway station or to the Parkplatz there and not to the village or the peak itself. It’s marked on the map below.

How much does it cost to rent a sled at Moleson-sur-Gruyeres?

Once all seven of our friends (+1 non-Whovenile delinquent) arrived, we bought tickets and piled inside the main office to choose the best, ie fastest, sled.

Wait ’til you try to cart them awkwardly through the electronic turnstile.

The cost to rent a single sled/toboggan at Moleson is 10 CHF.

Insider Tip: Bring your own sled to save the 10 CHF sled rental fee.

If you’re wondering how to steer or brake these ultra-fast sleds, you use your feet.

There’s no steering mechanism to turn the wooden runners and no way to stop except for some good ol’ fashioned Fred Flintstone action!

How do you get from the ticket office to Plan Francey, where the toboggan run starts?

Because the sledding runs at Moleson are located high up on the slopes of the mountain, you’ll need a way to get there from the Parkplatz. The clever folks in Switzerland have gotcha covered.

Your sledding ticket includes access to the sledding run as well as a ride on their funicular, an inclined train that slowly transports you up through the clouds to the top of the sledding route.

You’ll get off at a midpoint called Plan Francey to start your death-defying sledding adventure.

You’ll likely see other riders getting off the funicular and getting into a line for the adjacent cable car. Don’t follow them! They’re skiiers heading to the Moleson summit.

Insider Tip: If you have a Swiss Magic Pass, you can ride to the summit on the cable car for free.

The funicular is so small, our group of 10 was just barely able to squeeze into the few remaining air pockets in the tram before the doors closed and we were whisked uphill.

A few minutes later, we spilled out into the brilliant sunshine and stared up at the giant hulk of Le Moléson in awe.

We’re terrible about getting selfies. Many thanks to our friend Ivan, who took this photo of us at Plan Francey. The Moleson summit is behind us.

The 4-kilometer trail is fairly wide and groomed. As we mentioned before, it drops 400 meters along the entire length of the run. Most of it is a fairly even drop with just a couple of steeper places.

After snapping a few photos, we all gathered at the start of the sledding run and figured out how to sit on and steer our sleds. Then, laughing and excited, we shoved off.

The first few hundred feet of the trail brought a smile to my face as our sleds gently swished along.

This is great, I thought.

Coasting to a stop, those in the lead waited until our party regrouped for the next stretch.

Emboldened by excitement and the gentle pitch of the first section, I catapulted onto my sled headfirst and launched down the hill.

Headfirst? What in Heaven’s name was I thinking?!

Just because the others were doing it…

But SO MUCH FUN!

Despite all I have seen and experienced, I still get the same simple thrill out of glimpsing a tiny patch of snow in a high mountain gully and feel the same urge to climb towards it.”

It took us nearly an hour and a half to work our way down the entire sledding route. 1,312 feet is a lot of ground to cover on a sled.

Once at the bottom, we all piled back into the funicular for a second go-round of heart-pounding, kidney-bruising, tailbone-busting fun.

Paolo shows no fear as he flies past.

Despite the frequent and complete inability to stop, hairpin corners, steep drop-offs, the occasional barbed wire fence along the route, and a single spectacular crash when I plowed over Ivan, none of our friends died.

Fun Fact: Davos, Switzerland is the birthplace of modern competitive sledding. An Australian won the first competitive race in 1883, beating out 19 competitors from around the world. Click to Tweet

I can’t remember the last time I had so much pure fun or laughed so hard I had tears in my eyes.

After all, if you’re not crying a little, you’re not really having fun.

Interested in other winter activities in Switzerland besides sledding?

Take a minute to PIN it!
14 shares