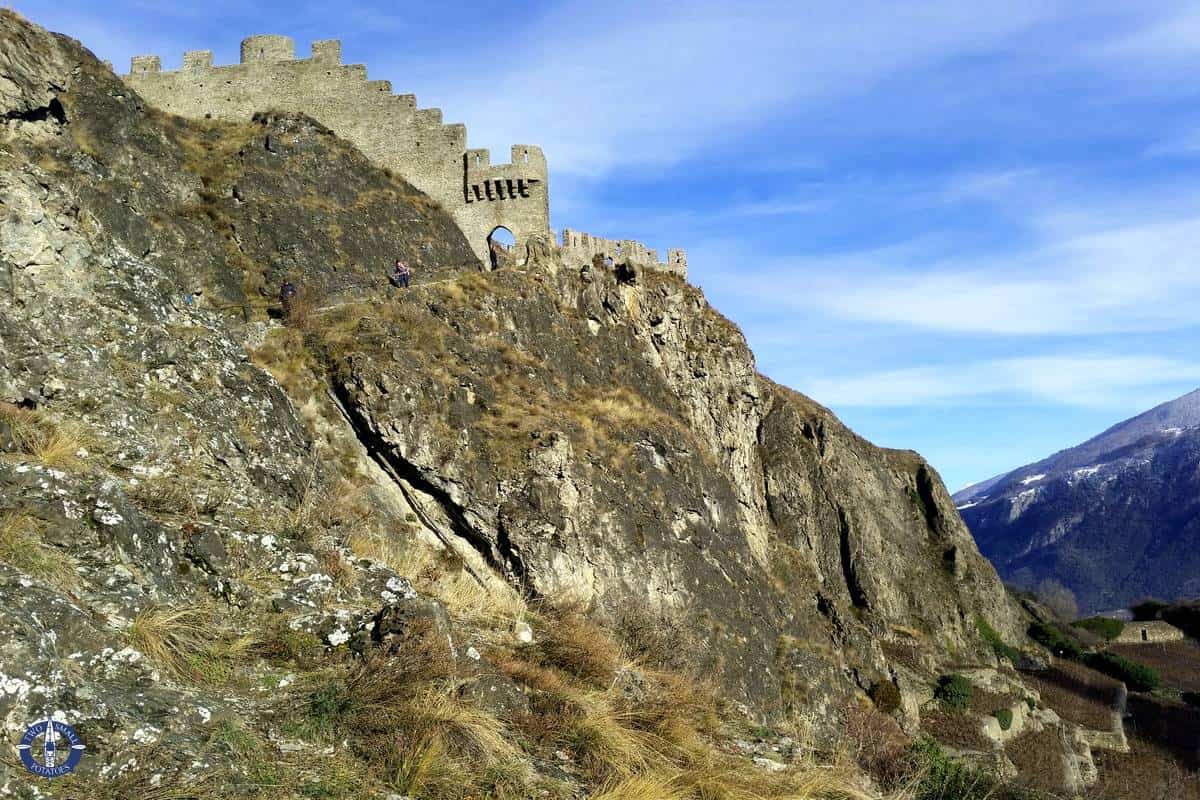 Switzerland
January 18, 2015 1
*This site contains affiliate links. If you purchase through these links, we may receive a small commission at no extra cost to you. 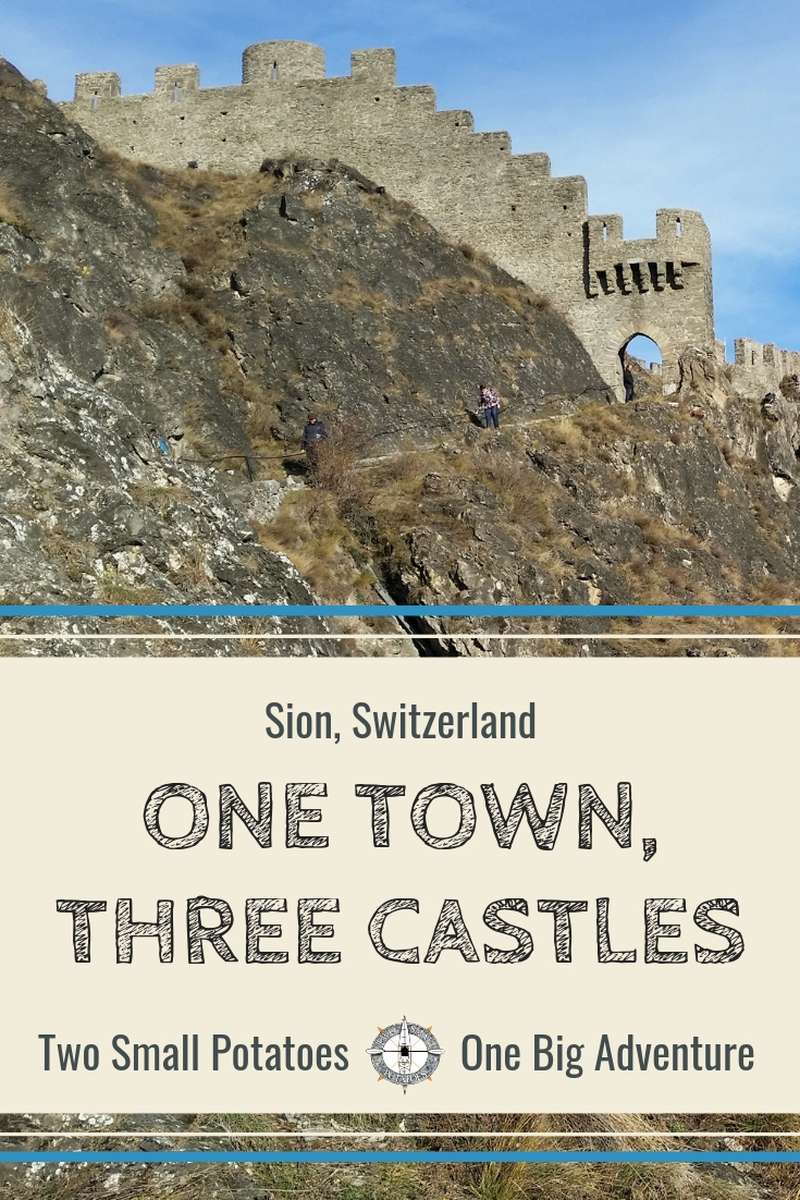 The town of Sion is located in the Valais, the southern sun-belt of Switzerland. Despite its small size, this charming little community of about 35,000 is home to not one, but three castles: Chateau de Tourbillon, Chateau de la Majorie, and Chateau de Valere. And to think we stumbled upon it entirely by accident!

The day we ended up exploring Sion, we actually set out on a road trip to Italy. Our rough plan was to spend a leisurely day driving south from our house in Fribourg, then east over Simplon Pass, which is supposed to be one of the most scenic mountain passes in Switzerland. When the weather dawned bright and sunny one morning, we set out to find the pass – and Italy.

Unfortunately it’s almost impossible to leave Switzerland without passing something new begging to be explored. This was the case while driving through the Valais. We were pretty floored to see not one but two massive castles perched on dualing hilltops. How could we not stop and explore? All thoughts of Italy went out the window.

Castle buffs will love this little town. You’ll have so much fun whiling away the better part of the day exploring these medieval beauties.

Château de la Majorie, or Majorie Castle, dates from the 13th-century. The castle was once the home of the local bishop.

In 1947 it was largely converted into an art museum: Le Musée d’art du Valais, or the Valais Museum of Art. Art fans might want to pop in to the museum for a bit.

Castle buffs will want to head straight for the other two castles: Tourbillon and Valerie.

Either way, you’ll likely pass Majorie Castle since there are very few paths – by car or by foot – that lead to the other castles.

Dating from the 11th-13th century, the Château de Valère has the most to actually see during a visit.

The castle is in good condition and has several noteworthy attractions.

Hikers who make the short trek up the hill can explore All Saints’ Chapel just below the castle, the much larger Basilique de Valère (Valere Basilica) on top, and quaint, narrow cobblestone streets with really cute low arched doorways.

If you’re visiting on your own and not as part of a guided tour, visiting both the castle and basilica are free.

Inside the Basilique de Valère, the organ dates from 1435. It’s the oldest playable pipe organ in the world.

The third castle, Chateau de Tourbillon, is another 13th-century castle. It was once a summer home for the religious elite in Sion.

Unlike Valere, Tourbillon Castle is in ruins, destroyed by a fire in 1788. Though a slender watchtower and some of the inner walls survived, what mostly remains of the massive castle is just a shell.

That said, it’s an impressive shell!

Access to the hilltop monster requires a bit of hiking, but it’s not particularly far or strenuous.

Once on top, the views of the surrounding Alps, the town of Sion, and the adjacent Valere Castle are outstanding.

Scenic Drive From the Valais to Chamonix, France

If you have access to a car and are feeling adventurous after visiting the castles in Sion, the resort town of Chamonix, France is just one incredibly scenic drive away.

When we finally left Sion, we only had a couple of hours of daylight left, but we decided to keep on driving. Backtracking a few miles to the Swiss town of Martigny, we headed up over the mountain pass into France.

As soon as we turned onto the Rte de la Forclaz in Martigny, our road became a narrow two-lane road with hairpin turns and patches of ice and snow.

We were in heaven, but I would only recommend the drive in summer or for folks who’re accustomed to driving rural, winding highways in the snow.

After miles of twisty icy roads and beautiful snowy mountain scenery, we passed through a tunnel and suddenly, voilà, we were in France!

Sadly, Customs wasn’t there to greet us.

We expected a friendly welcome. Balloons. Some sort of fanfare.

Perhaps they went for a coffee run.

Luckily, the mountains just kept getting bigger, craggier, and more beautiful, so we quickly forgot this oversight.

Be prepared if you drive this route, especially in winter when the peaks are decked in snow.

My mouth literally dropped when we came around a corner and were confronted with a line of peaks that form part of the Mont Blanc massif.

By the time we arrived in Chamonix, it was nearly dark.

After poking around in town for a bit, we discovered a mouth-watering bakery and attempted to buy some pastries and cappuccinos. Unfortunately we only had Swiss francs with us and the shop only accepted cash.

Such a rookie mistake, leaving home without euros!

Our dejection quickly faded as we retraced our route back through the jagged peaks, back over the Col des Montets mountain pass.

During the drive home, all we could think about was returning to do more exploring. The only hurdle is managing to make it out of Switzerland.

Looking for other bucket-list worthy experiences in Switzerland?

Know Before You Go
Take a minute to PIN it!
44 shares