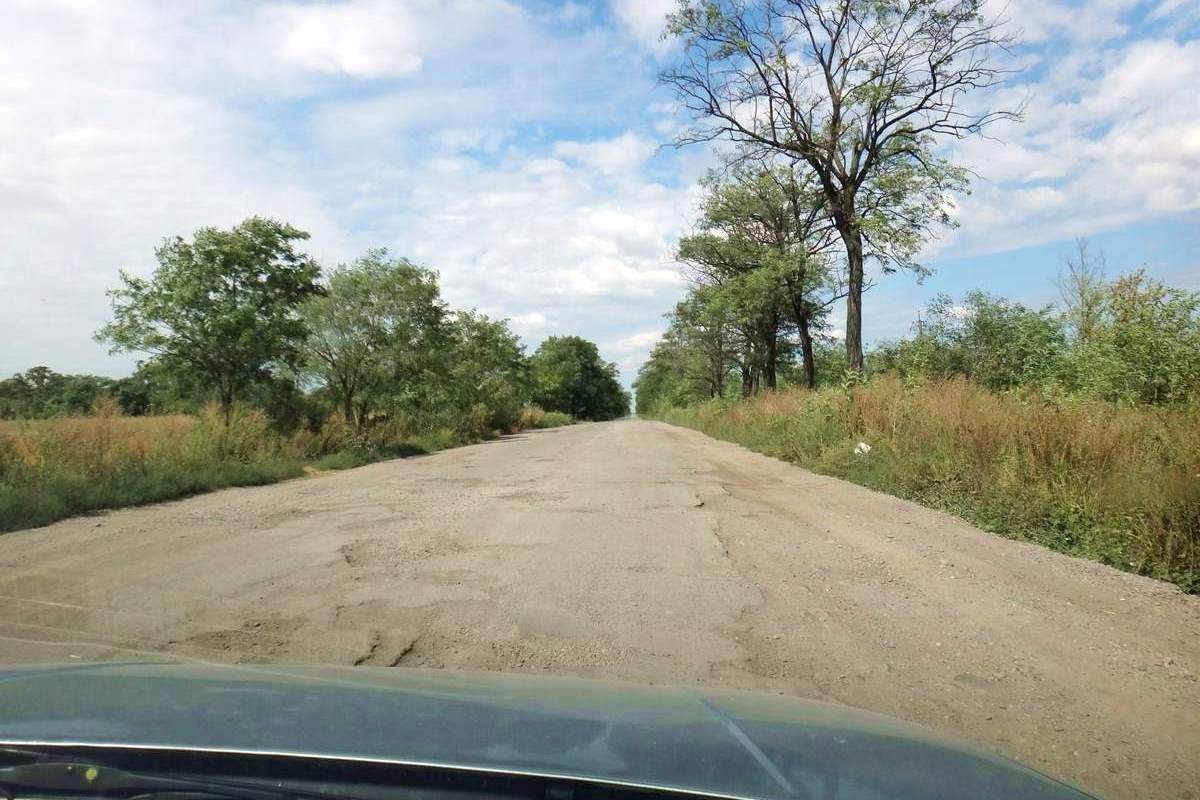 The "open highway" near Pyiterfolvo, Ukraine is old and broken.

We had such high hopes for Ukraine.  Such high hopes.  And it’s not that it disappointed us really – not at all.  Our first sojourn into the country just wasn’t quite what we expected.  To be fair, we were only there for a single afternoon, and most of that was spent driving a 120-km stretch of road through the rural western portion.  In a country that’s just a tad smaller than the state of Texas, it would be roughly equivalent to driving between San Antonio and Austin (except at a snail’s pace).  Really, what we’ll always remember the most about Ukraine was an intimidating border crossing, followed by hours bumping along deserted, battered roads as the hulking phantoms of half-built mansions lumbered past in the dry, oppressive heat.  That, and a shakedown from the po po in the town of Mukacheve.

After over a week of sight-seeing in Romania, we were finally on our way home to Switzerland.  Preferring never to backtrack, we decided to drive through Ukraine on a whim since it was the most direct route to Slovakia.  Plus, we were really curious to see what it was like.

Our little foray into Ukraine started in northwestern Romania near the tiny town of Halmeu.  Despite the area’s fairly desolate location, we fell in line with a mob of cars with Ukrainian plates waiting on the Romanian side of the border to return home.  Most received a cursory check before being waved through by heavily armed officials.  As Americans with Swiss plates, however, we clearly stood out.

When our turn came, we passed over a handful of documents – everything we could think of that they might need – then sat and waited while the gal rifled through our paperwork.

Staring intently at our American passports, then at Touille’s pet passport, she peered at our little dog with suspicion (trust me – Touille is many things, but she’s no criminal) before raising her eyebrows at our back seat heaped with thoroughly disorganized camping gear.  When she got to our vehicle registration (which is written in French), it was just too much.  Clearly, this poor gal didn’t know what to make of us.  Pointing abruptly to an adjacent building, we followed her hand signals as she brusquely ordered us to pull out of line.

With our engine off, we watched as an older gent approached our car, motioning for us both to step out.  Unable to understand a word he said, we explained that we were Americans living in Switzerland, vacationing in Romania, and thought it would be fun to check out Ukraine on a whim.  Even had he been able to understand English, I’m sure that would’ve confounded him.

To be fair, we couldn’t provide a particularly valid reason he should allow us across the border and were rather expecting to be turned away.

One official after another joined him.  We watched as they all hovered over our documents, talking amongst themselves as they passed them back and forth, darting curious glances at us.  After asking us to open all the doors and the back to inspect our belongings, they thoroughly checked the undercarriage for bombs.

All this for Two Small Potatoes!

Just when I was starting to think they wouldn’t let us enter and we’d have to plot a different route through Slovakia, the border guards released us.  Returning our documents, they handed us a small slip of paper, then motioned for us to proceed to the next checkpoint.

We were next met by a gal in a soldier’s uniform positively dripping weapons.  Aa pair of automatic rifles crisscrossed her back and the handle of a knife that would do Crocodile Dundee justice jutted from a holster at her waist.

Taking our slip of paper, she motioned us through to enter Ukraine after nearly an hour of inspection.  As we pulled past her, we caught the tiniest glimpse of a smile just as she turned away.  Despite her official job duties and menacing attire, it was clearly a friendly gesture.  Though it was the only sign of warmth we detected from any of the numerous officials there, it paved our way into Ukraine on a bright note.

Even though the experience was intimidating and the officials were far from “friendly,” all of them were professional.

Ready to resume our journey after the lengthy delay, we were in for a surprise.  Entering the town of Nevetlenfolu just across the border, the highway essentially ended.  Grand homes – mansions really – lined streets that had once been paved but were so neglected they had long since deteriorated into a mess of broken chunks of asphalt, wash-outs, and craters.  We still had hope that perhaps once out of town on the “open road,” the actual highway would be in better condition.

Bouncing along at about 45 kilometers per hour, we passed through the town of Pyiterfolvo, marveling at the Cyrillic writing on the sign.

As we neared the town of Mukacheve, roughly our half-way point in Ukraine, the decrepit road gradually melded into a well maintained paved road.   Fruit stands started popping up along the highway.  Set up in front of private homes, some were nothing more than a spare table with a heaping basket of grapes or tomatoes and a small basket to leave some coins.  Others were as large as the produce department in a typical grocery store, overflowing with every manner of fruits and veggies, fresh and glistening in the sun.

Stopping at a particularly appealing stand in the shade, we asked the gal if she would accept euros since we didn’t have any Ukrainian currency.  When she didn’t understand, I selected a few pieces of fruit, then held out a handful of spare change in euros, indicating she should select however much she felt we owed her.  She was so reluctant to take anything, I finally pressed several coins into her hand, confident that it was more than enough for the fruit but also hoping it wouldn’t be a problem for her to exchange or spend it.

Trav’s Ukrainian labmates were later appalled to find out we paid her a small fortune, but better a bit too much than too little.

Before we could savor our juicy peaches warmed from the sun, we entered Mukacheve.  Without ever entering the town proper, we skirted the western edge of the city, following the main highway north to the fateful roundabout.  Finally, the scene of the Ukrainian shakedown!

Immediately after exiting the roundabout, we were flagged down by two men wearing reflective vests, little hats, and some sort of uniform.  Assuming they were police, we pulled over onto the shoulder of the highway behind another car with Italian plates and turned off the engine, digging around for “license and registration.”  Without preamble, one of the men approached the driver’s side, ordered Travis out of the car, and took his passport.  The “officer” (we’re still quite doubtful they were actually police) ignored our questions as to why we had been pulled over, motioning for Travis to follow him across the highway to an unmarked building.

If your brain is screaming,

Never get into a white van with a man down by the river!

then you read my mind.

As Travis left, he shot a confused glance over his shoulder.  Worried and baffled, all I could do was give an exaggerated shrug, eyes huge.  Ignoring me completely, the other officer turned on his heel and returned to his station in the center island flagging down motorists.

What could we possibly have done to get pulled over?

A young couple exited the building across the street, crossed the highway, and drove away in the Italian car.  Judging from their expressions, they were not happy.  About 20 minutes later, the car returned and the couple went into the building, then came back to their car and drove away again.

With time to kill, I entertained myself by glaring at the remaining traffic officer.  Much to my dismay, he ignored me.

I watched as traffic flew past in both directions on the highway.  Not a single car with foreign plates.

Raising his arm, the officer flagged down a small business truck with Ukrainian plates.  Instead of escorting the driver into the building though, they spoke briefly, then the driver opened his door and handed something to the officer, which the officer pocketed before waving the truck back onto the road.  Belatedly, it finally started to sink in that this was a shakedown!

As the minutes ticked by, I grew increasingly impatient, then downright angry.  Fairly confident that neither Travis nor I was actually in any real danger, I did my best to intimidate the big bully across the street.

If glaring doesn’t work, let’s see how he likes being filmed.

Figuring our Sony point-n-shoot camera wasn’t very impressive, I whipped out our larger Nikon and elaborately proceeded to  snap “incriminating” photos of the illicit shenanigans I was undoubtedly witnessing.

Granted, my suspicions weren’t yet confirmed that these weren’t real police, but the tactic was effective.  Within minutes, he walked down the highway to a distant corner to continue flagging.  When I continued to “film” him, he retreated into the building across the street where Trav had gone with the other officer.

An honest cop wouldn’t do that, am I right?

Not long after Bully ducked into the building, Travis reappeared and stalked across the highway.  He was clearly angry. Refusing to answer any questions until we were back on the road with some distance between us and Mukecheve, he finally spilled the beans.

Clearly trying to extort money from Travis, the officer sat him down and played a video recording of our car exiting the roundabout.

By the way, we already knew we’d driven through the roundabout.

Claiming that Travis had in some way changed lanes illegally, he demanded 1500 immediately in Ukrainian hryvnia for the trumped-up infraction.  This was the equivalent of about 50 euros.

For the next 40 minutes or so, the officer grew increasingly frustrated as Travis repeatedly insisted he did not have any Ukrainian money.  This was the truth.  Oddly enough, he didn’t ask for euros, which we did have, though Travis obviously didn’t volunteer that information.

Who would do that?  Sadly, probably the Italian couple…

Travis kept saying he would be happy to pay for the alleged infraction if they would only be so kind as to mail us an official bill, as any legitimate police agency should be able to do.  Apparently this option was not appealing to the pseudo officer.

After much huffing and hand wringing, the officer finally thrust Trav’s passport back across the table, smacked his palm to his forehead (literally), and gestured for him to get the hell out of his office.  As Travis left, passport safely clenched in hand, the officer rattled off some things in Ukrainian, then firmly shook Travis’s hand as if to say,

Moral of the story?

Sometimes even feigned ignorance is bliss.