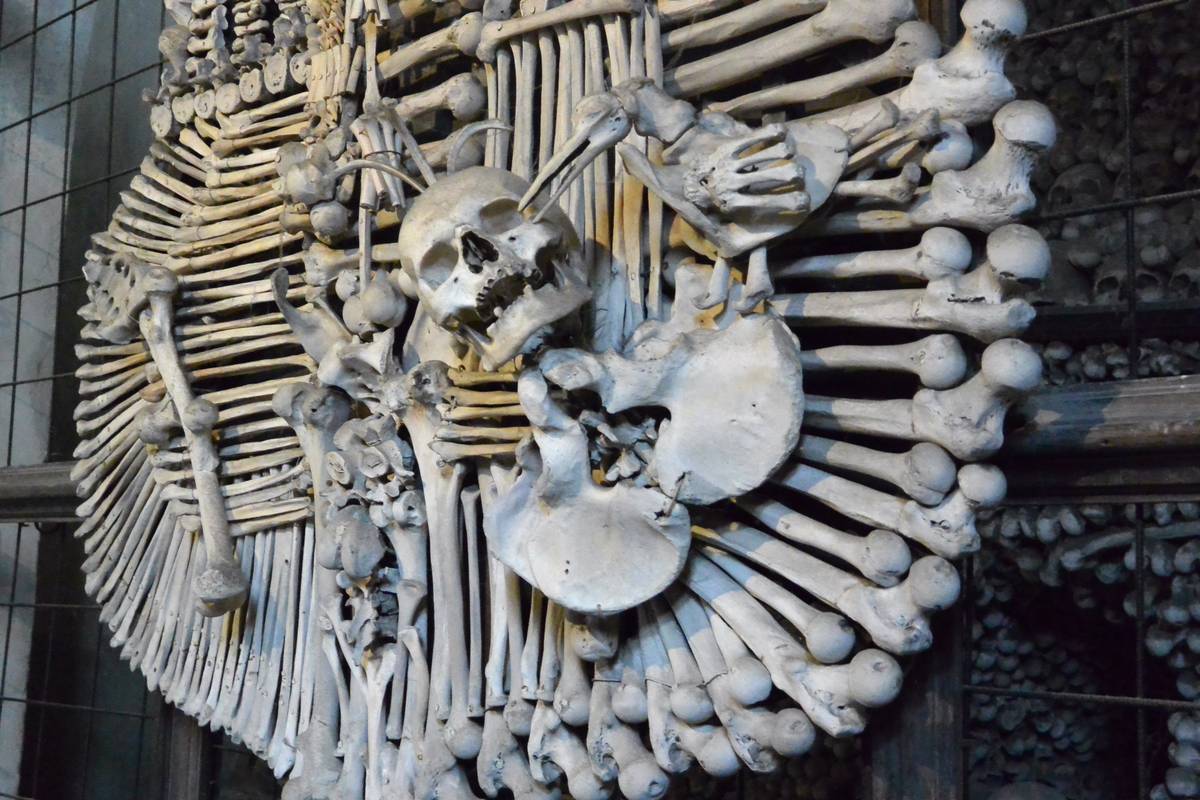 Sedlec Ossuary, The Church of Bones 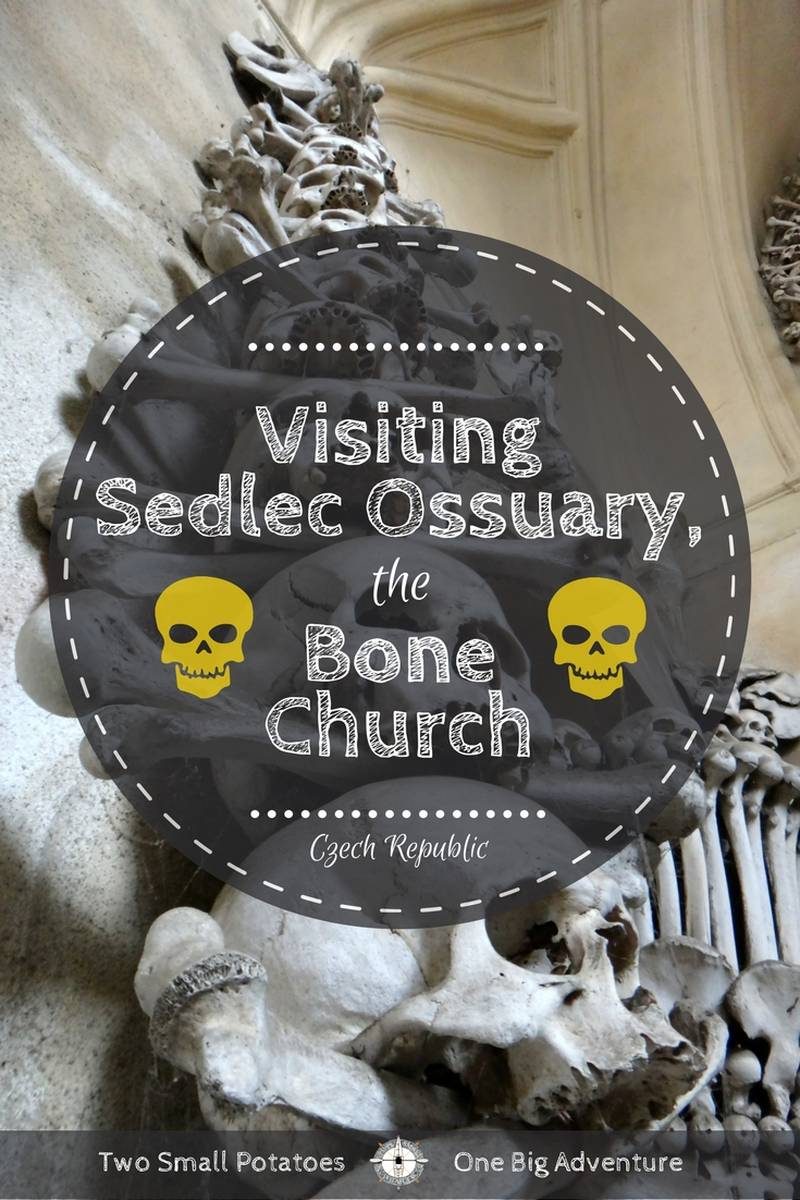 Last year on Easter we camped at an abandoned castle in Spain, a memory that’s still pretty hard to top.  This year we wanted to go somewhere much closer for the holiday, but couldn’t decide where.  We wanted it to fit nicely into a 4-day weekend without having to spend all of our vacation traveling to and from.  Göttingen is pretty much smack dab in the middle of Germany and so central in Europe that in just a few hours, we can be in Italy, Austria, France, Benelux, Switzerland, or the Czech Republic. That’s just too many options for Two Small Indecisive Procrastinators!  As of Wednesday, the weather forecast predicted gloom and doom for just about everywhere within a 6-hour radius.  Everywhere, that is, except Prague!  When I found out Prague Castle would also be hosting Easter festivities for the first time and that the famous Sedlec Ossuary – “The Church of Bones” – is less than an hour from Prague, we hit the road Friday morning for the Czech Republic.

Our only stop along the drive was to pick up a road vignette for the CR just across the German border.  Living in Europe apparently can turn even a hardcore fly-by-the-seat-of-your-pants’er into a planner since I actually read about the vignette in advance.  I hate to admit it, but it paid off.  Not only was it easy, but someone at the vignette booth actually asked us what to do with it.  And we knew the answer.  Easter miracles do happen.

Prague is so close to the German border that we arrived in just over an hour.  The only year-round campground we’d found, Triocamp, is conveniently located in the northern outskirts of the city, so it was our first stop.  We threw our tent down in a grassy field, our home for the next 3 nights, and cursed the meteorologists for the frigid rain that had followed us from Germany.  Too early to go to sleep but too late to hope any sites would still be open, we instead burrowed in our down sleeping bags for warmth.  Piling on layers, we slept in full winter gear.  Prague, clearly, had not received the memo that it was supposed to be spring.

The next morning we were up bright and early for a half-day side trip to the nearby town of Kutná Hora.  There, in the tiny suburb of Sedlec, we found the stunning Kostnice Sedlec Ossuary, more commonly referred to as The Church of Bones.

Planning a trip to Prague? Don't miss the fascinating and macabre Sedlec Ossuary in the town of Kutna Hora. It's an easy day trip from the city. Click to Tweet

The first Cistercian monastery in Bohemia was founded in 1142, which later gave rise to the town of Kutná Hora.  The ground where the “Church of Bones” now stands began as a cemetery overseen by the Cistercians as part of the monastic complex.  Throughout the 14th century, over 30,000 victims died during epidemics.  Their bones were laid to rest in the cemetery, which quickly reached capacity.

Near the end of the 14th century, a Cistercian abbot ordered the construction of a Gothic church, The Cemetery Church of All Saints, on the grounds of the existing cemetery.  During the church’s construction, tens of thousands of bones were carefully removed from their original burial sites.   The abbot required that there be sufficient space for these bones to be newly laid to rest on the lower floor of The Cemetery Church.  This charnel house, or burial vault for human skeletal remains, is now known as the Sedlec Ossuary.

Thousands more were buried in the vault in 1421 when Hussite troops conquered the city of Kutná Hora, burnt the monastery, and damaged the church and cemetery.

Legend of the Church of Bones

According to a popular legend, the King of Bohemia sent the abbot of the monastery to the Holy Land in 1278.  When the abbot returned, he brought with him a handful of dirt from Golgotha, the ancient site where Jesus was crucified.  When word of this pious act spread, the cemetery became a coveted burial site. 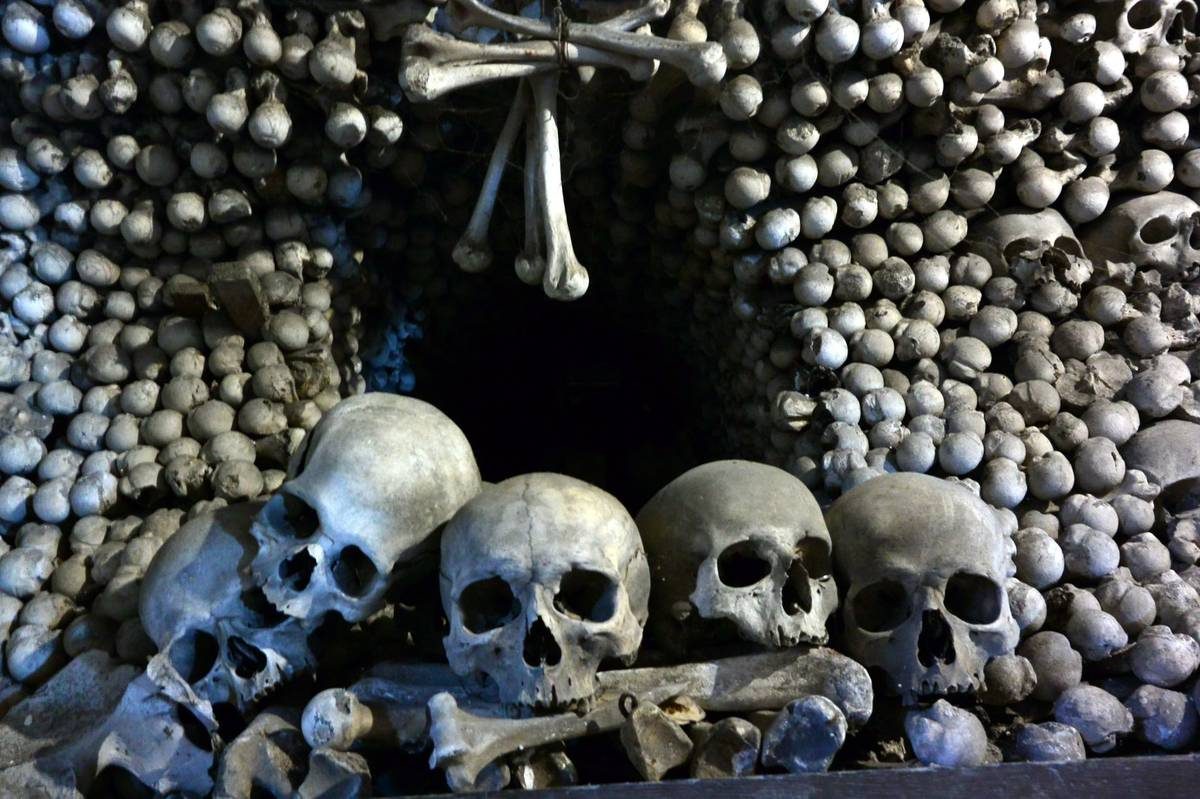 Another legend holds that in the 15th century, a partially blind monk piled bones in the four main bell-shaped mounds that remain in the four corners of the Church of Bones. Once his work was completed, he miraculously regained his eyesight. 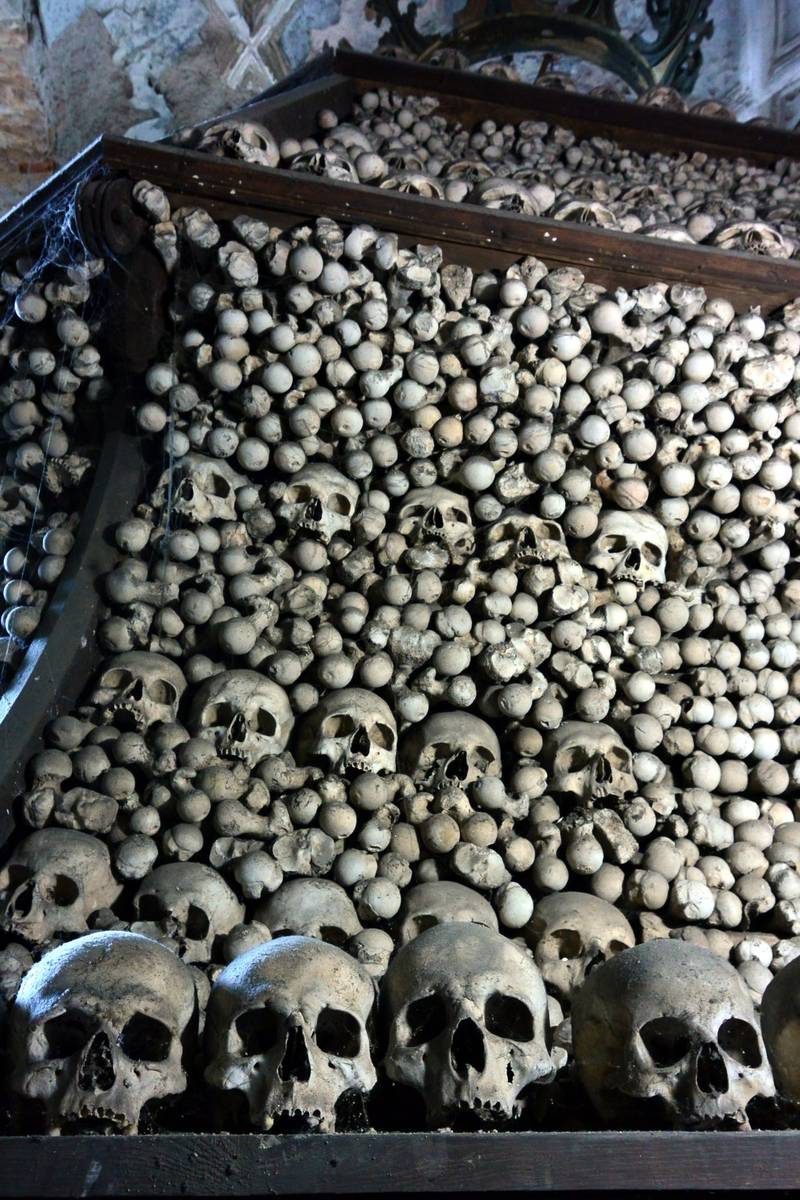 Though it’s unknown who started arranging the bones as a form of art, some semblance of decoration had already taken shape in the 1500s. 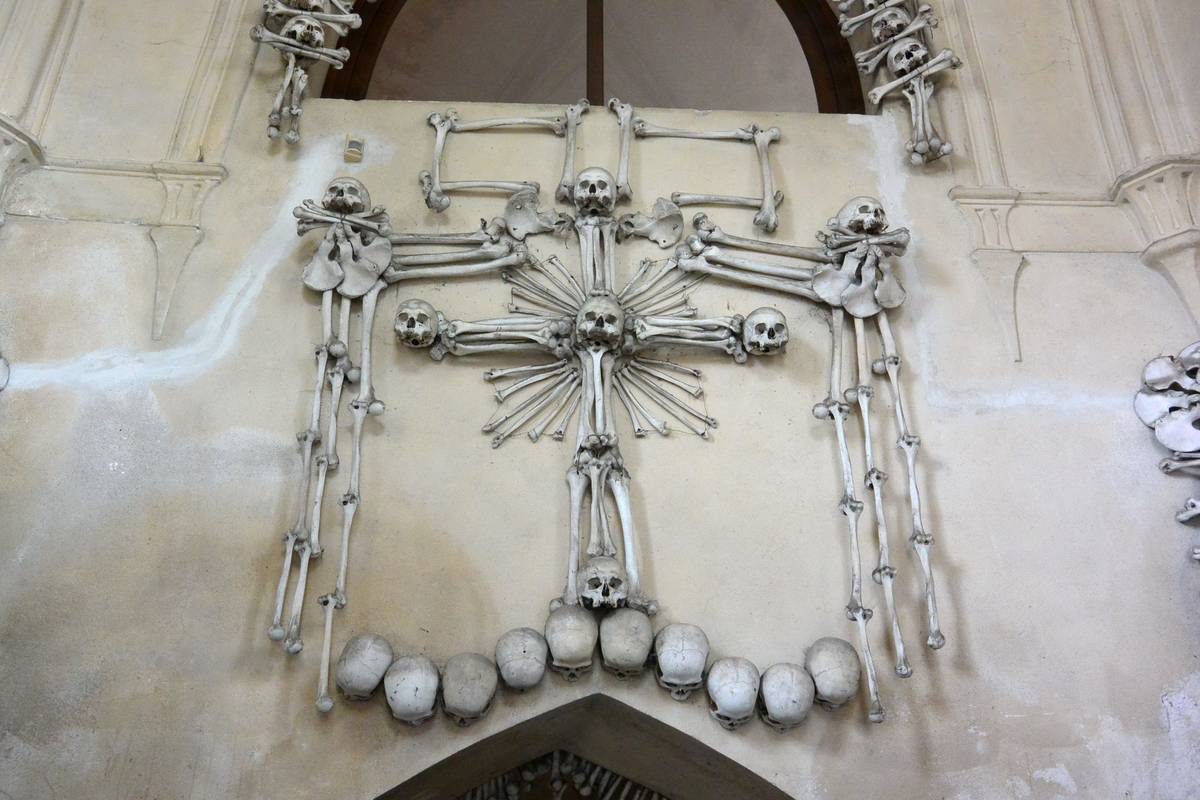 During the Baroque reconstruction in the 1700s, bone-shaped chalices and skull garlands were added. 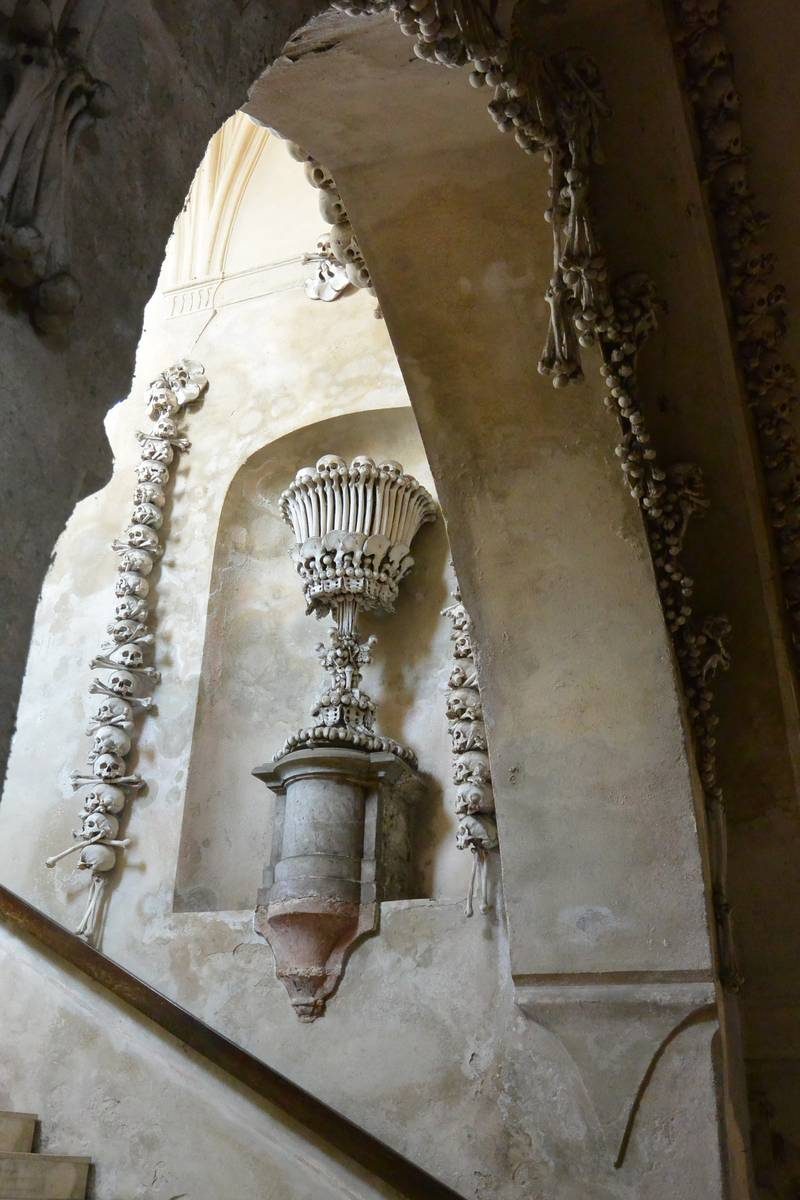 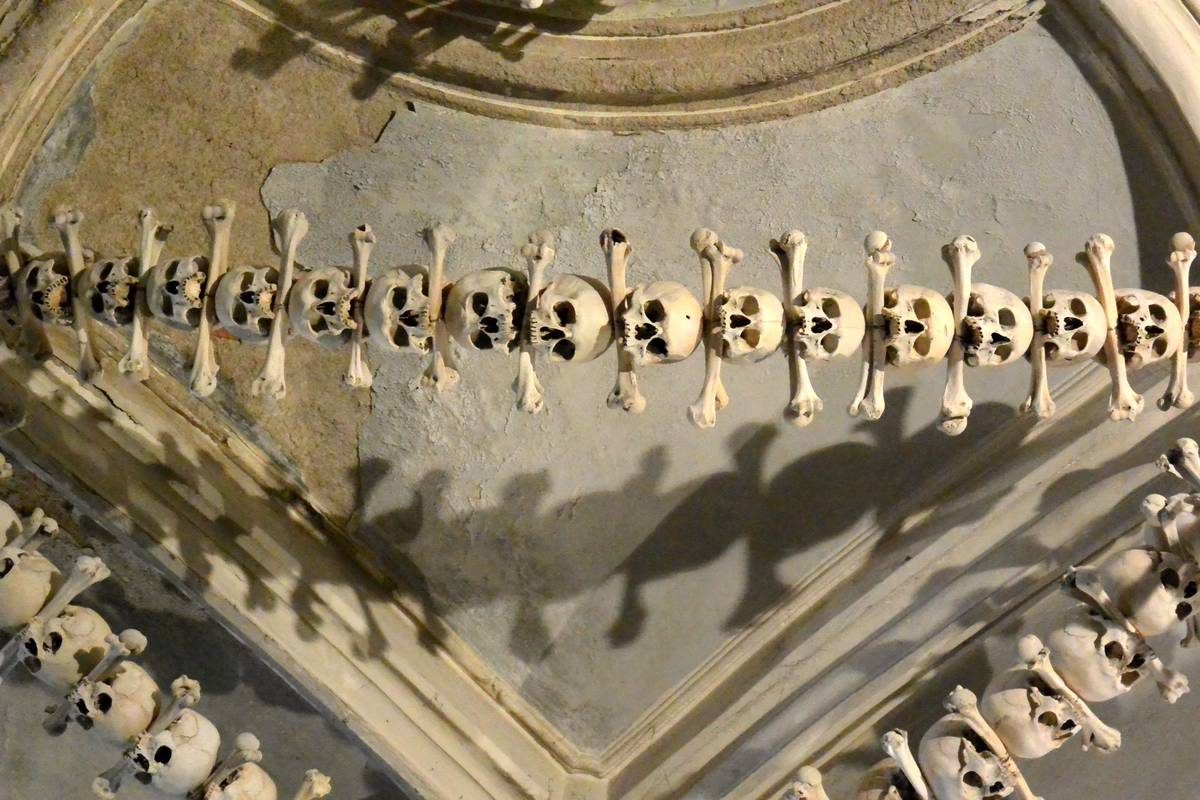 Additional decorations were added in 1820 by Frantisek Rint.  Of his creations, two are especially notable.  The first is the coat of arms of the Schwarzenberg family, who bought the abbey property in the 1800s.  One of the more famous sculptures, that of the raven skeleton pecking a hapless human skull, adorns this coat of arms. 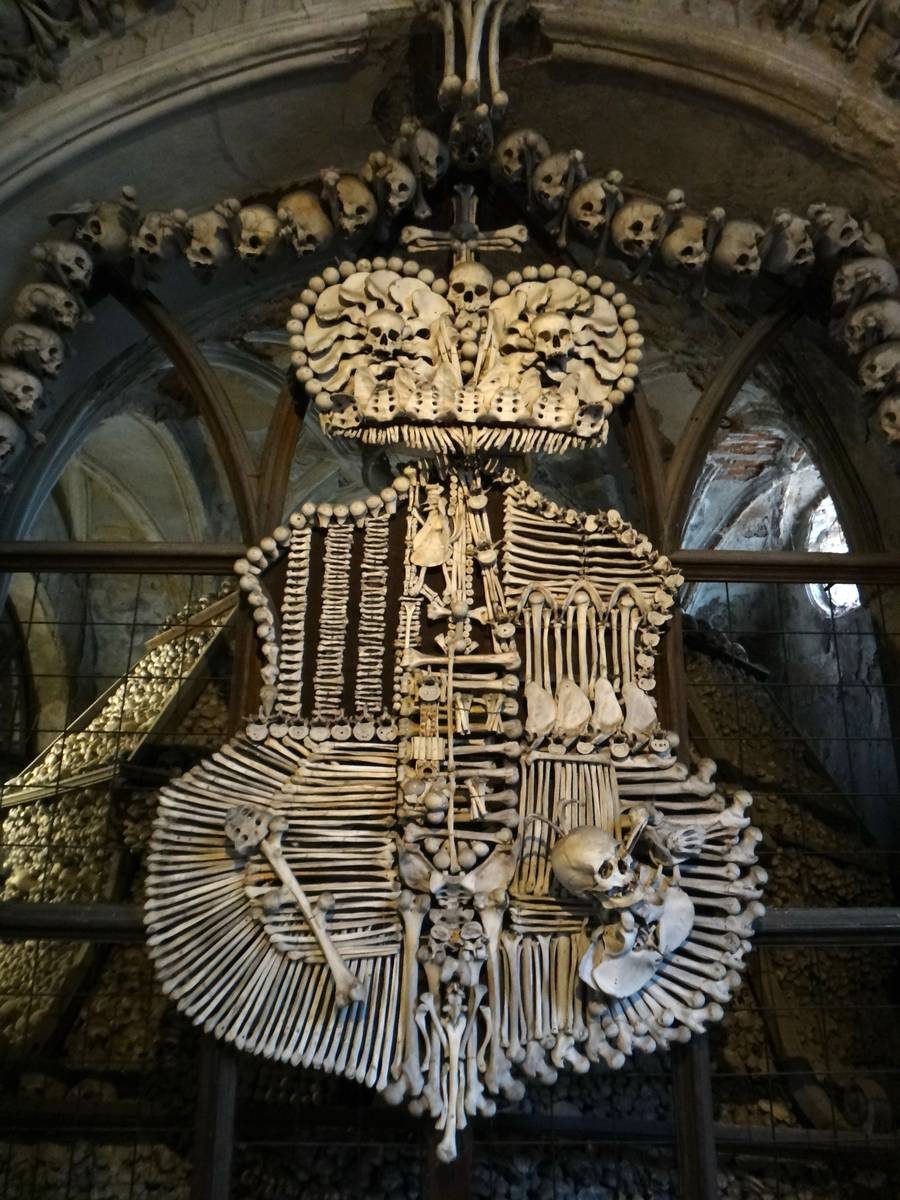 The second is the massive chandelier in the center of the vault that is said to include at least one of every bone in the human body. 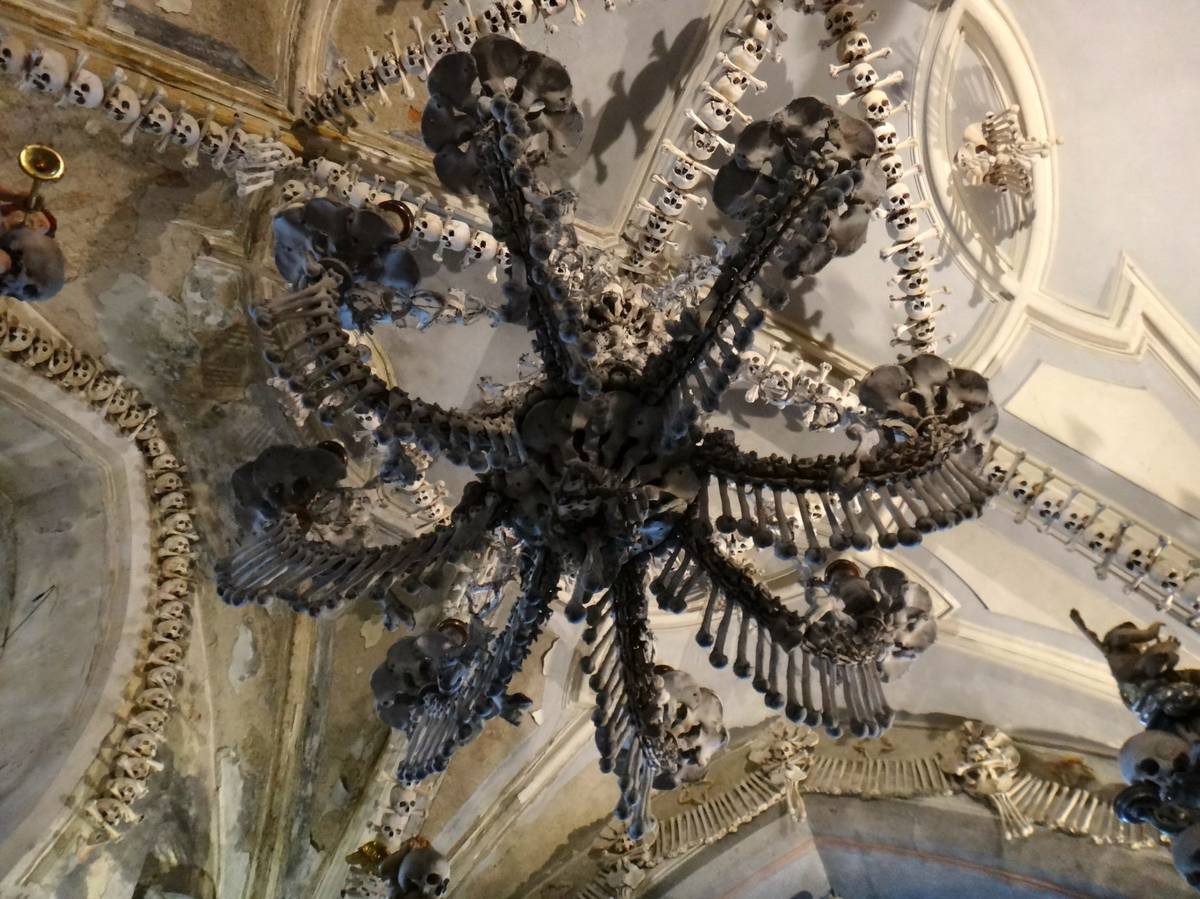 Renovations to the church during the Baroque period increased the overall weight of the building beyond its original capacity.  The lower portion of the building extends 3 meters down into the soft ground where the walls are constantly wet.  Because it’s built on soft, wet ground, the church is slowly sinking under its own weight at a slight tilt, which continues to create fissures and cracks in the floor and walls.  For the past year, a team working with the Sedlec Parish has been monitoring the movement of the building and is working with a team of specialists to stabilize it.  The team has ambitious plans to restore the entire structure with renovations currently underway. 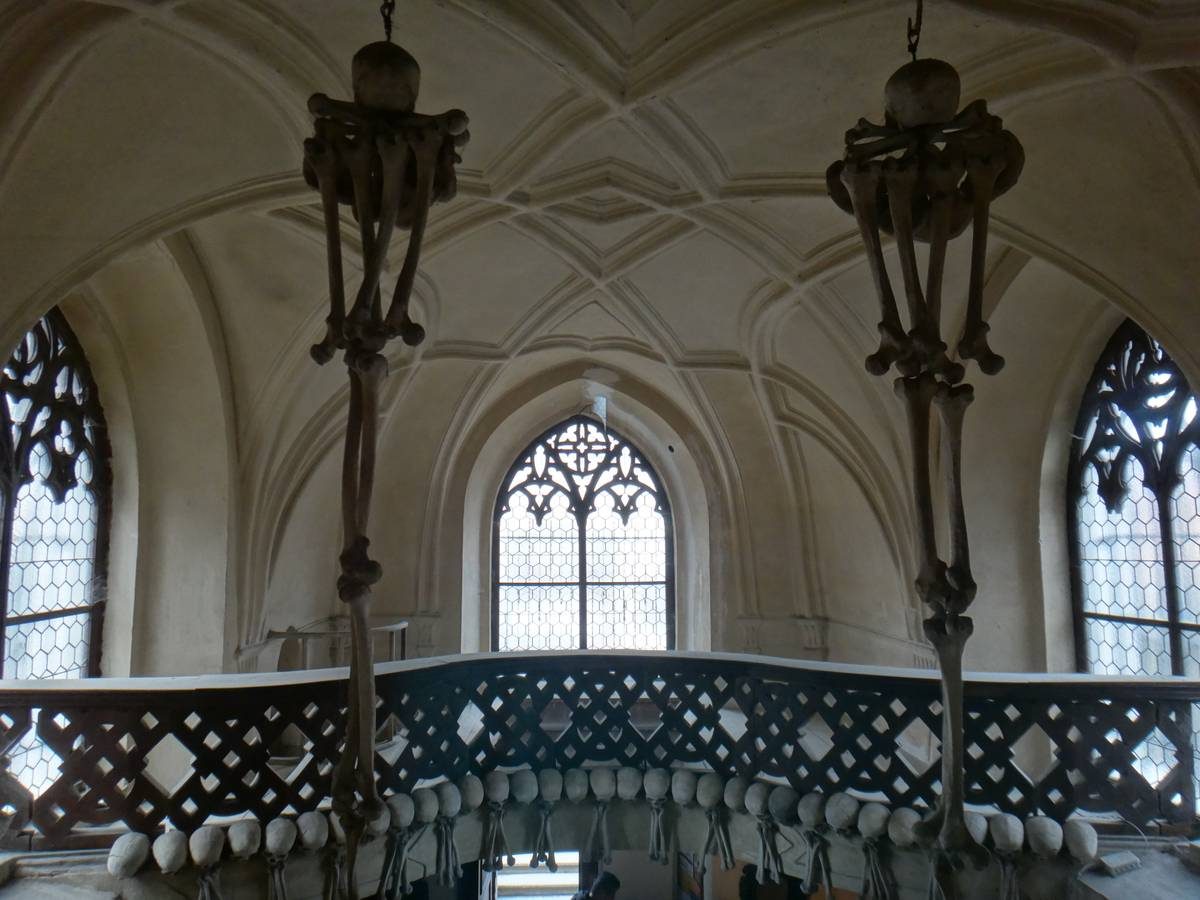 Type to search or hit ESC to close
See all results
wpDiscuz
22
0
Don't forget to leave a comment!x
()
x
| Reply