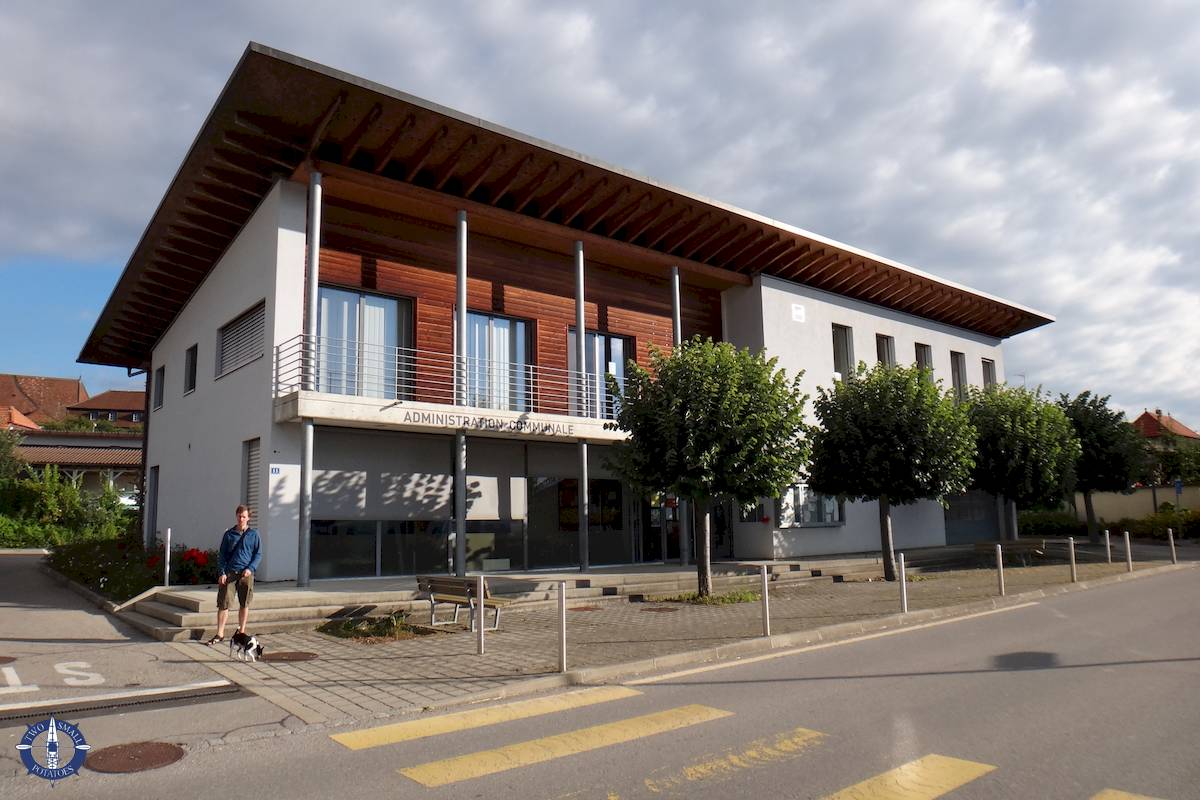 Today we caught a bus early in the morning to Lentigny, another small village about 4 kilometers from our house in Onnens. Our mission? To officially notify the Swiss authorities we’d moved from the town of Fribourg to a new town and address in their jurisdiction. This process of registration in Switzerland is mandatory for those who live here.

This notion is rather peculiar to Americans who move frequently from state to state, town to town, and never report it to anyone, except maybe the US Postal Service so you can still receive your grocery store coupons and girly mags.

So what is this business of registration in Switzerland?

When we first arrived in Switzerland, we found out we were required to report to the authorities within 10 days of our arrival.

We missed the deadline by a few days.

Unfortunately, because we were in transition for our first month and stayed at two Airbnbs and two hotels, it significantly complicated our initial registration in Switzerland. We couldn’t provide a “permanent address” because we didn’t have one.

We didn’t want our mail to go to a place where we wouldn’t be a few days later, so we used Trav’s work address at the university.

At our first registration appointment in Fribourg, we relied mostly on Google Translate while a French speaking official completed our paperwork. We paid our 40 CHF in cash on the spot, knowing we’d have to register and pay again once we had a permanent address.

A few days later, we received a very strongly worded letter noting that the address we provided was not a valid home address and that we needed to provide one. He clearly recognized that our home address was the university’s address.

One of the downsides to living in a small town.

A month after that first registration appointment in July, we found ourselves again back at the office of cantonal authorities to register our presence. We were overdue since we’d moved into our house on August 1, but our Lentigny office had been closed for holidays, so we were off the hook.

We reported to the powers that be and again paid around 40 bucks to register.

We were armed with a copy of our lease in French, Trav’s work contract in French, our US passports, Swiss permit Bs, proof we had applied for medical insurance (a requirement within 90 days of arrival), and our first-born.

Just kidding. We don’t have kids.

If we did, they probably would‘ve snagged one.

Luckily, a local couple repatriating back to Switzerland happened to be in the office and spoke English. Not only did they help us with some of the paperwork, but they also explained to the official the complicated situation with Trav’s medical insurance application because of his post doc status. Without them, I’m not convinced the gal in the office would have accepted our documents.

In turn, she provided us with yet another official form for our records: proof we were registered in Fribourg Canton, Lentigny La Brillaz.

Registration in Switzerland is a success!

With that done, we walked to the teeny tiny village of Chénens so Trav could catch a train to work.

I figured I’d explore the countryside with Touille, our little rat terrier. I knew I was only a few kilometers from home and the rough direction it was, so it seemed like a fool proof plan to enjoy the beautiful summer day.

The walk wasn’t exactly what I had in mind.

After leaving Chénens, I followed a highway that ended up being incredibly busy with traffic. It was so narrow with no shoulder on either side that I had to jump up the embankment each time a car came, which was every few minutes.

Touille was unfazed, but I had hoped to find a quiet back-country road where she could run off leash, without the constant rush of cars and honking from motorists who weren’t thrilled about sharing their road with me.

As soon as I came across a narrower paved road leading off the main highway, I followed it for about 3 km until it dead-ended at a huge fence paralleling the railroad tracks. Unable to find a way around, I turned and headed back to the main road.

Not cool, Switzerland. Not cool.

I tried another side road further on.

After less than a mile, the paved road abruptly ended in the middle of a farmer’s field. Just like that! It didn’t lead to anything.

Well, except this field.

At this point, I decided I’d seen enough on our little walk. Parched and tired, I was ready to go home.

If I had been less stubborn, I would have just walked to the nearest town with a bus station and caught a ride home.

But nooooooo. I had set out for an “adventure,” so adventure it would be.

Instead, I walked to the town of Cottens, then plodded the last 3 km home from there.

All told, I know I walked at least 10 grueling miles – as grueling as nearly completely flat can be. My aching muscles were clearly telling me I’m not ready for hiking the PCT, which is on our bucket list.

I take comfort in knowing that at least I stayed awake for the rest of the evening, unlike the little rat dog that passed out, snoring with her mouth open, for the next 24 hours!

Being a rat terrier in a foreign country is hard.