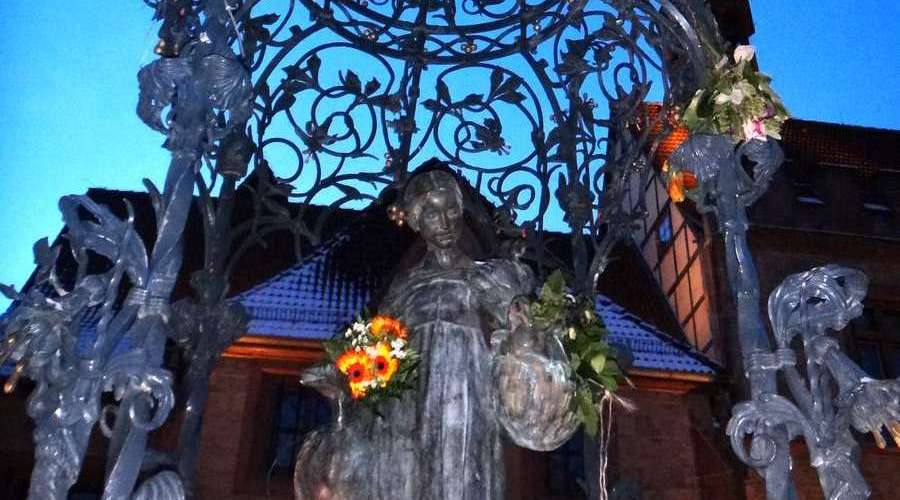 Expat Life in Germany
January 22, 2016 0
*This post may contain affiliate links. If you purchase through these links, we may receive a small commission at no extra cost to you. We only recommend companies we trust!

One of Göttingen’s most well-known landmarks is the Gänseliesel, the famed Goose Girl.  Located downtown in the walking district, the statue is centered within a stone fountain.  Capped with ornate metal vines and leaves, the fair maiden has been at the heart of a quaint tradition for over a century.  Not long after the statue was placed in the square in 1901, students from the local university began to clamber up its base to kiss the Goose Girl after graduating.  A tradition now observed primarily by doctoral students when they finish their graduate studies, the celebration involves music, balloons, artfully decorated hats, push carts, and a lively procession – a spectacle that’s in full swing all before the graduate even arrives at the feet of the Goose Girl.

Though Travis and I first heard about this tradition when we visited Göttingen for his job interview last June, I imagined it as a fairly systematic, docile event.

In my mind, students would gather quietly in the square before queuing in neat lines, single file, before respectfully planting a kiss on the Goose Girl’s careless cheek.  I assumed the carts used to transport students to the statue would be something akin to a wheelbarrow: small, rather crude, and perhaps a bit ignominious.

In actuality, it was not at all what I expected.

On Friday night, we had the opportunity to attend our first graduation celebration at the Gänseliesel. One of Trav’s lab mates recently completed his PhD, so he invited us to participate in his celebratory parade.  Meeting up with his lab mates shortly before the festivities began, we gathered in a plaza a couple of blocks from the statue.  From there, we would follow the procession to the Goose Girl.

Lamenting the January chill and wintry 5 pm sunset, we wandered among the brightly decorated carts. Each was plastered with ribbons, flashing lights, and photos of the students throughout their graduate studies.  The carts would be used to transport their respective students to the  Gänseliesel.

The graduates themselves were easily visible, wearing giant, fun hats adorned with their model organisms and scenes with scientific themes in miniature.  Upbeat music thumped from the plaza.  As per tradition, when the procession kicked off at 5:30, professors and PIs began pulling the carts to the statue with their students comfortably reclining in their four-wheeled chariots.

Sipping piping hot glühwein that another of Trav’s lab mates generously doled out, we inched our way toward the statue.  Space conveniently opened up, a little at a time, as each student successfully completed their mission to climb up the statue, entwine a bouquet of flowers in the ironwork, and plant a kiss on the famous Goose Girl.  By the time Trav’s lab mate reached the statue, we were ready just a few steps away to cheer him on.

Remaining near the statue a bit longer, we watched one particularly acrobatic graduate who made it all the way to the top, then climbed down to kiss the girl from upside down, inside the dome.

Despite the warm mulled wine, the cold eventually began to seep in.  When folks began to drift away for the evening, we said goodnight and drove home to our blissfully warm and toasty apartment in Nikolausberg.

With more friends in Trav’s lab who plan to graduate in the next two years, I’m already looking forward to our next Gänseliesel celebration.  I just hope they graduate during the warmer summer months.

Know Before You Go
9 shares