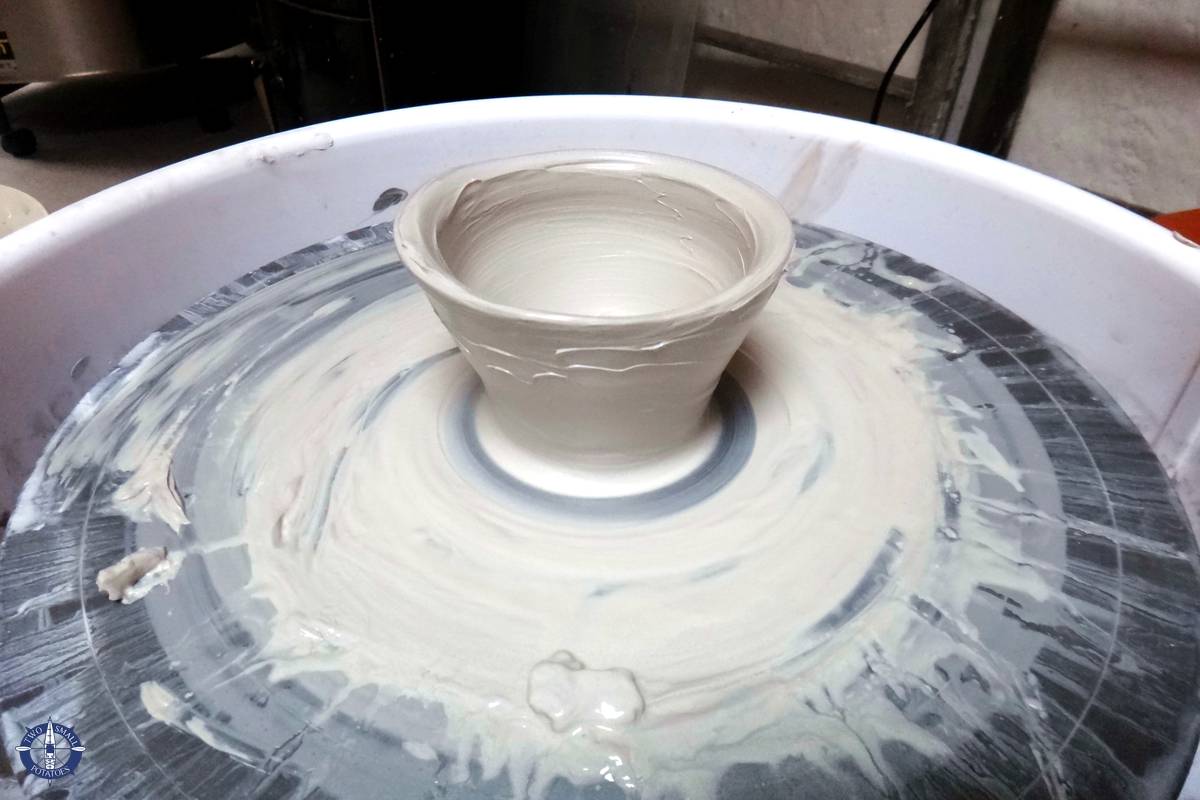 Learning How to Make Polish Pottery in Pruszowice

Poland
February 22, 2015 4
*This site contains affiliate links. If you purchase through these links, we may receive a small commission at no extra cost to you.

The sun set not long after Rana, Dorota, and I left Berlin. I was disappointed when inky darkness quickly swallowed the countryside around us. Mountains, forests, entire lakes – anything could have been obscured by the utter blackness just the other side of our car windows. The night shrouded Poland in obscurity, prolonging the mystery of a country I’d never before visited. We were heading to Pruszowice in the western part of the country. I didn’t know it yet, but I was about to spend a fabulous day making Polish pottery in Dorota’s mom’s ceramics studio.

If you’re wondering why three women are driving through the Polish woods in the dead of night, backtrack to Berlin, The Gritty City.

When we crossed the border from Germany, not a single border guard was present.

Since I’d forgotten my passport at home in Switzerland, it was probably for the best, though I’ve yet to be asked for any form of ID driving into France, Germany, or back into Switzerland. Crossing the border here in Europe so far has been considerably less restrictive than it is between the US and Canada, and certainly more so than the US/Mexico border.

After a couple of hours of uneventful driving, we were somewhere near Legnica, Poland when we hit a stretch of road Dorota had warned me about.

Suddenly our smooth, two-lane asphalt switched to one that, though still paved, had a rough surface with sharply raised grooves at frequent, irregular intervals.

Beware the A4 autostrada in Poland.

The road, known as the A4 autostrada in Poland, is part of the E40 – the longest road in Europe, stretching over 8000 kilometers from the Calais in France to Kazakhstan, ending just shy of its border with China.

Sections of the A4 were built by Nazi Germany during the 1930s but were not maintained or improved during WWII or the decades that followed.

Many of Poland’s roadways have been modernized, but we had reached one of these original sections of pavement, one of the last still awaiting improvements. Though a far cry better than miles of gravelly potholes, it was jarringly uncomfortable nonetheless.

We bumped along at 80-100 kmph for nearly an hour until we neared the city of Wroclaw. There, we found smooth sailing the remainder of the way to Pruszowice, our final destination in Poland.

A Night at The Hourglass Sanatorium Airbnb

Pulling off the main road, we crept down one, and then another, bumpy country road before finally coming to rest in a small forested parking area.

Through the trees in otherwise total darkness, I could see a brightly lit two-story cottage in the distance. Grateful to be out of the car, I inhaled the smells of a truly wild wooded forest for the first time since Trav and I left our home in Oregon.

Grabbing luggage and gifts from Switzerland, I followed Rana and Dorota to the house.

Travel Tip: Ula rents out rooms in her home on Airbnb, where her listing is known as The Hourglass Sanatorium. It’s really convenient for those who want to take any of her pottery classes, but she’s a warm and gracious host to all travelers, including those who just want to book a room for the night.

We were greeted at the door by Dorota’s mom, Ula, whom I was meeting for the first time, and Dorota’s two sisters, who warmly swept us inside.

I felt positively enveloped in hospitality!

After depositing my bags upstairs in a cozy, country-style bedroom with hardwood floors and sloped wooden beams, I rejoined the ladies downstairs. We remained there until the wee hours, drinking wine around the giant dining-room table, playing Cluedo Sherlock, and nibbling on a variety of Swiss chocolate we’d brought.

I wish I could blame losing so badly at Cluedo to the wine…but I can’t.

Feeling humbled by their hospitality and uncharacteristically reserved, I listened as the other girls cracked silly jokes, talked about music totally foreign to me, and frequently slipped comfortably into Polish.

Drained by a long day of sightseeing in Berlin, hours of driving, and too many glasses of wine, I finally bade everyone good night and left the warmth of the wood fire for my cozy bed upstairs.

I fell asleep to the cheery sounds of laughter downstairs and of Fifka, the affectionate resident kitty, thumping up and down the stairs, chasing some imaginary foe that stood little chance of escape.

After waking late the next morning and devouring a hearty spread of cheeses, breads, and fried eggs farm-fresh from the nearby village, I eagerly accepted Dorota’s invitation to try my hand at making pottery.

She and Ula, an accomplished ceramist and teacher, led me out to the pottery studio attached to the house. Both of them make pieces they sell in markets and galleries in Poland, Switzerland, and elsewhere in Europe.

I spent the better part of the afternoon in the studio, greedily soaking up information from Ula about basic pottery techniques.

She let me feel the textures of several different kinds of clay, some pliable with a smooth texture, others more sturdy or with a gritty texture.

Selecting a specific ball of clay, she gave it to me to roll out like cookie dough, then showed me how to create the bowl shape by molding it to a hard plaster form and leaving it on top of the wood stove for a spell to dry and harden.

Coming back to it later in the day, she helped me file down the uneven edges – though even my best efforts left irregularities. She suggested I could put feet on it if I chose and provided ample tools to create etchings or 3D designs on it.

While my bowl was drying on the fireplace, I tried another technique.

Making a small round clay base, Ula instructed me to roll out long, thin strands of clay. She showed me how to lay each strand around the perimeter of the base, one atop the next, until the mug was my desired height. Using a small tool like a painter’s palette knife, she then melded the ropes of clay together.

Once I’d rolled out a handle, I scored each end of it and the mug where I would attach it with small scratch marks, then dotted those areas with a mixture of clay and water to act as glue.

After much smushing to merge the handle with the base and to shape the lip like a flower, my mug was essentially complete, though it would need to be fired in the kiln.

The last and possibly neatest technique Ula showed me was throwing a piece on the potter’s wheel.

Selecting a whiter, softer, and finer-grained ball of porcelain clay for this project, Ula handed it to me, telling me to pound it into a compact ball without air pockets. Heated in the kiln, these air pockets could explode.

I first watched Dorota working on the wheel, then took a seat amidst laughter and jokes about the pottery scene from the movie Ghost. It has to be one of the most famous pottery scenes in cinema history.

Aiming my ball at the very center of the wheel where I was supposed to throw it with some force, I threw – and completely missed the center.

Incredibly patient, Ula helped realign my glob of clay, showed me where to put my foot to control the speed of the wheel, and directed me while I added water to my clay and started spinning it.

I was startled to be able to feel even tiny irregularities in the shape as it spun. How to control those irregularities and mold it into what I wanted turned out to be elusive.

Even under Ula’s watchful eye, I accidentally obliterated the bottom by pushing my finger all the way down, creating a hole in the base. With her tutelage, I continued anyway and created a crooked cylinder with uneven walls shortly before the entire tower of mush collapsed into a seemingly hopeless mound.

At that, she left me for a spell and allowed me to just play freely. Somehow, I started to get the hang of it and when she returned a bit later, I’d managed to create a fairly symmetrical bowl.

All a credit to the teacher!

Late in the afternoon, I was the last one still working in the studio when Dorota suggested we head into the nearby town of Wroclaw so they could show me around, something I was most eager to do.

I hastily finished the leaves on my bowl and regretfully left the studio, taking one last look at the pieces I’d made and at the rows of Ula’s beautiful works lining her shelves.

Since we didn’t have enough time to do it during this trip, Ula generously offered to fire my pieces in her kiln, a process that typically takes several days and multiple firings.

Dorota then offered to fly at least one of my pieces home with her during her next trip to Poland, though my bowl with the leafy pedestal is likely too fragile to fly.

Even if I never see any of my pieces completely finished, I won’t forget such a fun day making Polish pottery in Ula’s studio!

Know Before You Go
Meet Pat a Mat!

I leave you with this amusing clip that Ula shared with me. Meet Pat a Mat, two Czech handymen trying to make their own pottery!