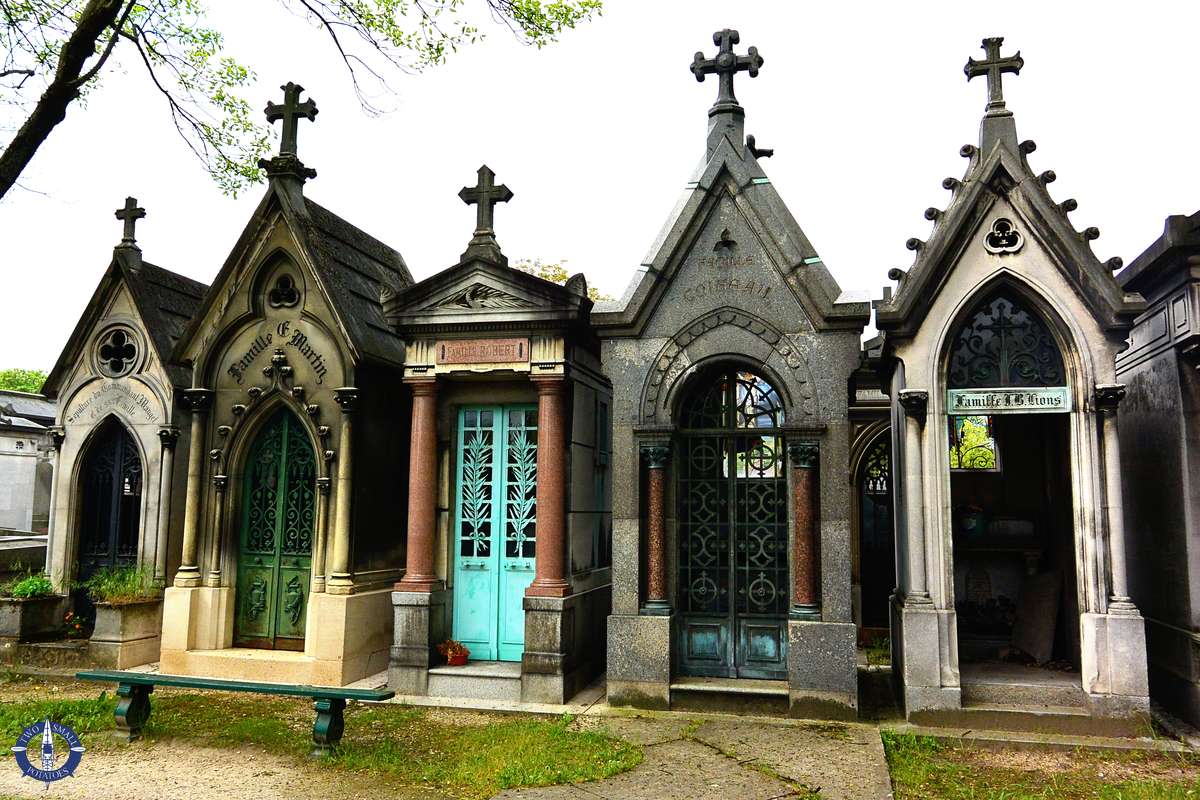 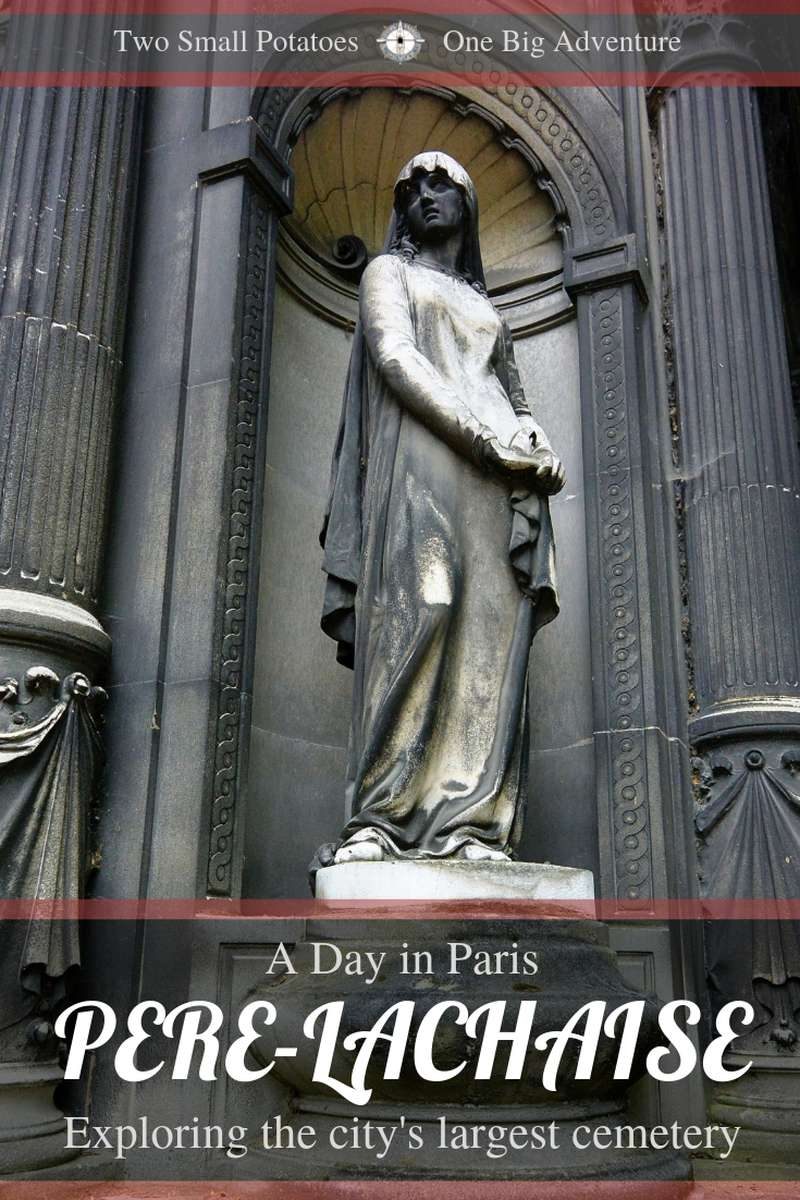 Paris is filled with more attractions than anyone could ever visit in a single visit – even an extended one.  Most people choose to prioritize visiting the more famous places like the Eiffel Tower and Notre Dame Cathedral.  We understand.  That’s exactly what we did!  But one really neat place that wasn’t on our radar until we randomly stumbled across it was the Cemetery of Pere-Lachaise.

After spending three wonderful days exploring Paris with friends, we’d said goodbye to them the night before. Waking up a bit late, we checked out of our Airbnb, caught the Metro to Parking Pyrénées-du-Clos, a garage on the outskirts of the city where we’d left our car, then dropped our bags in the car.  From there, the cemetery was less than a 10 minute walk.  While our friends were kicked back on a flight bound for the United States, we were strolling among millions of departed souls in the city’s largest cemetery.

Known in French as the Cimetière du Père-Lachaise, the non-denominational cemetery was established in Paris in 1804. Pere-Lachaise wasn’t initially popular, but since then, over a million people have been buried on the grounds. The remains of another 1-2 million are held in an ossuary in the form of bones and in a columbarium in the form of ashes.

As a popular and expensive place to be buried, it’s the final resting place for a number of famous personalities – Jim Morrison, Chopin, Balzac, Oscar Wilde, and many others.

The Irish poet, Oscar Wilde, is perhaps best known for his novel, The Picture of Dorian Gray.  Controversy surrounded the author during his lifetime.  Born in 1845 during a time when homosexuality wasn’t widely accepted, he was convicted of sodomy for his sexual relationships with other men.   Shortly after serving two years of hard labor in prison, he was released and died at the age of 46.

Wilde’s tombstone is a massive statue of a winged creature resembling a Sphinx, wings splayed in vertical flight. Thousands visit every year to pay their respects to the popular monument.  It’s long been a tradition for the author’s most hardcore fans to slather on bright lipstick before kissing his tombstone.  In an effort to protect it, authorities encased the lower portion of the tomb in Plexiglass in 2011.  Besotted groupies have merely resorted to climbing the neighboring gravestone to kiss the stone above the glass.

One of the most renowned French artists buried at Pere-Lachaise is Eugène Delacroix.

Another 19th-century artist, he was born in 1798 near Paris and was orphaned at the age of 16.  It is believed that his legal father was not his biological father, however.  His real father, Charles Maurice de Talleyrand, continued to support Delacroix throughout his life.

Heavily influenced by Impressionism, Delacroix became a prominent French Romantic painter. Many of his pieces are now on display at the Louvre Museum in Paris.  The ceiling of the Galerie d’Apollon at the Louvre is also his work. 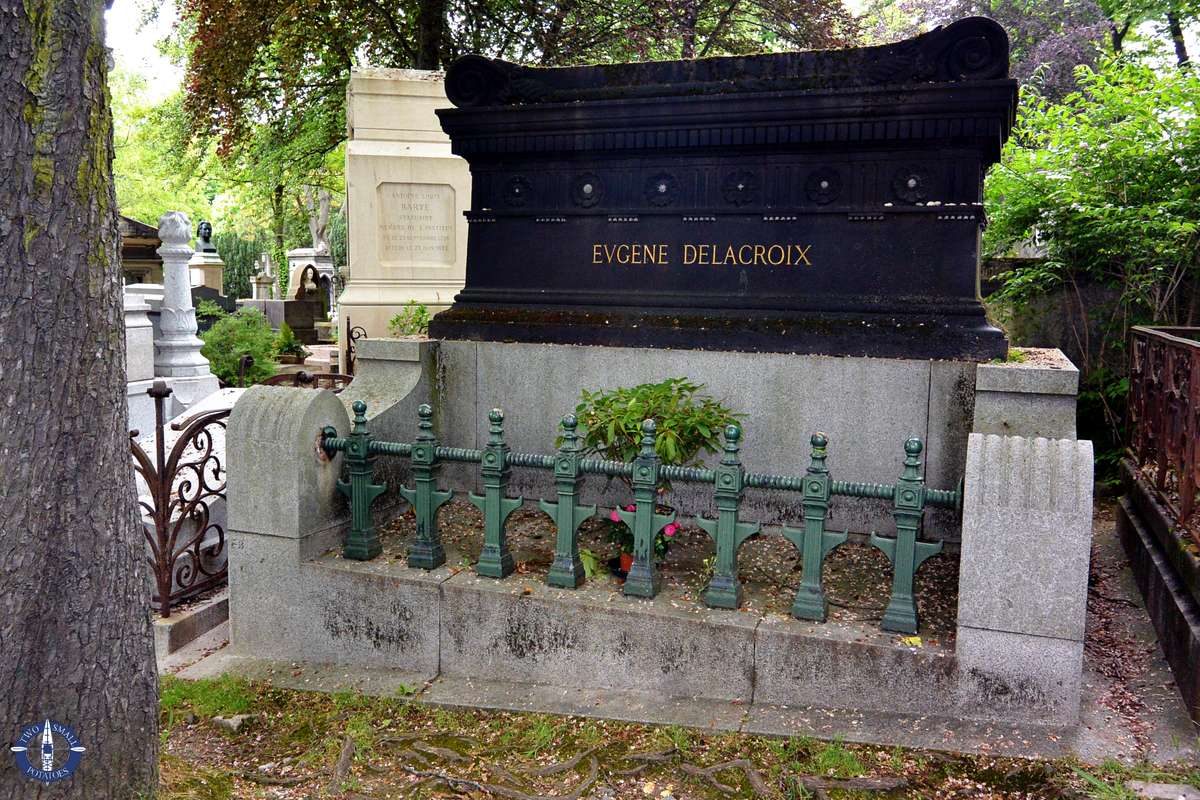 Partially hidden behind a wall of other tombs is the grave of Jim Morrison, beloved lead singer of the 1970’s American rock band, “The Doors.”

A member of the “27 Club,” Morrison died at the age of 27 under suspicious circumstances.  His body was found in the Paris apartment he shared with his girlfriend, Pamela Courson. After inheriting his entire fortune, she died of a heroine overdose less than three years later, also aged 27.

Rock fans around the world visit his grave, leaving chewed gum on a nearby tree and locks, hair ties, and private mementoes on the gated fence around his memorial.

Interestingly, while the cemetery wasn’t initially popular, that’s clearly changed.  It now covers over 100 acres. Crosses, tombs, gravestones, and crosses in every state – from old and crumbling to new and grand – are somehow squeezed among 5000 trees and wide brick walkways.

While in Paris, don't miss the Cemetery of Pere-Lachaise, said to be the most visited cemetery in the world. Click to Tweet

The cemetery’s crematorium is marked by a domed gold tower, rising like a foreboding omen.  It was added in 1894. 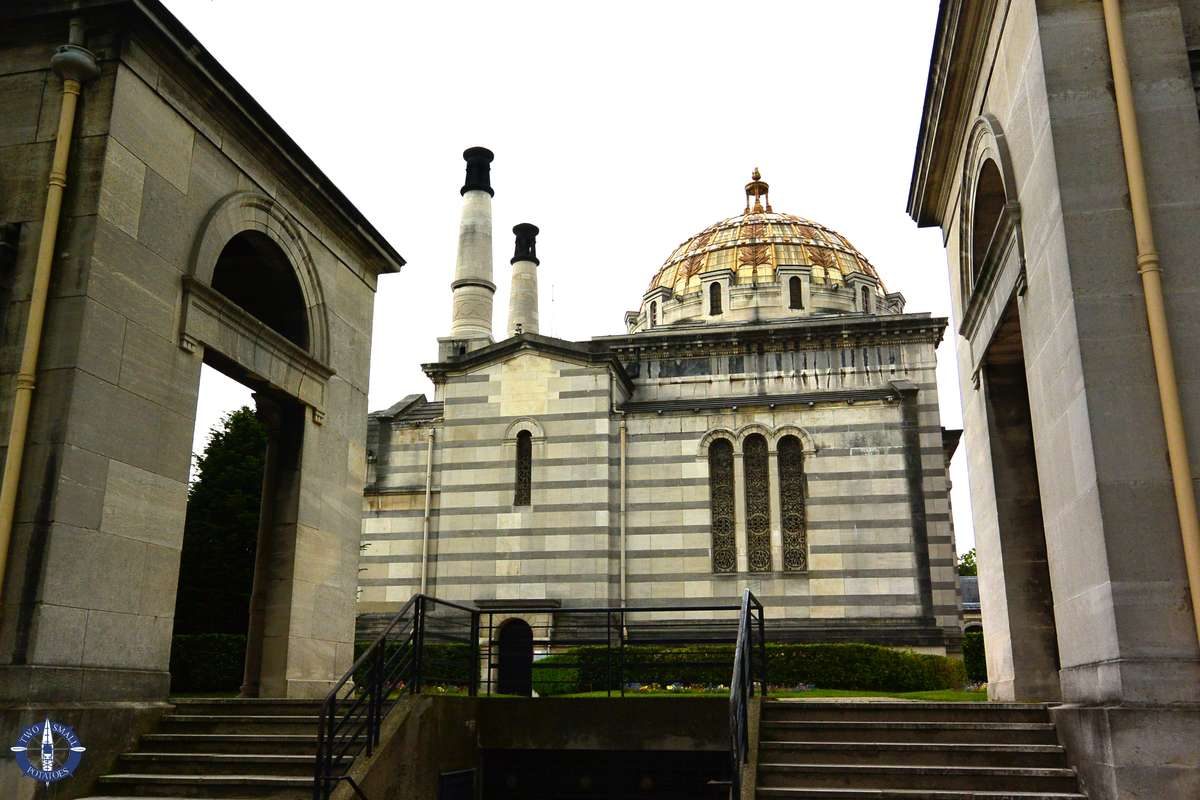 Not far from the crematorium is the columbarian.  Room after room in the austere building is filled with rows of nooks large enough to hold the ashes of the deceased. 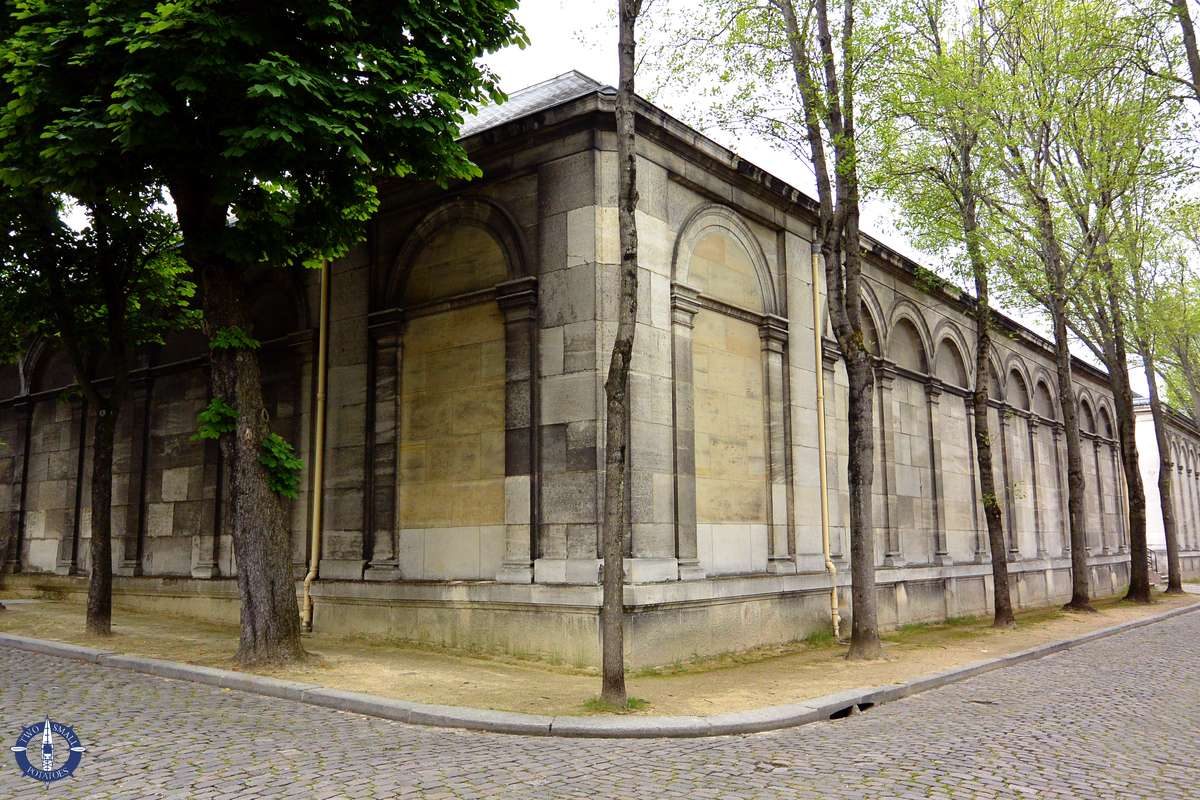 It’s still possible to be buried there, but it’s not easy.  There’s a long waiting list, and only those who’ve lived in Paris and meet the requirements get approval.

Space is also increasingly limited.  As with most cemeteries, those who’re approved for burial have to pay for it. Future residents can purchase 50, 30, or 10 year plans for their plans. When the lease expires, those who fail to renew or can no longer afford their plot run the risk of having their remains removed.

To save money, many opt to be buried in the same crypt or tomb as family members.  The ashes of entire families who’ve been cremated are intermingled in some plots. 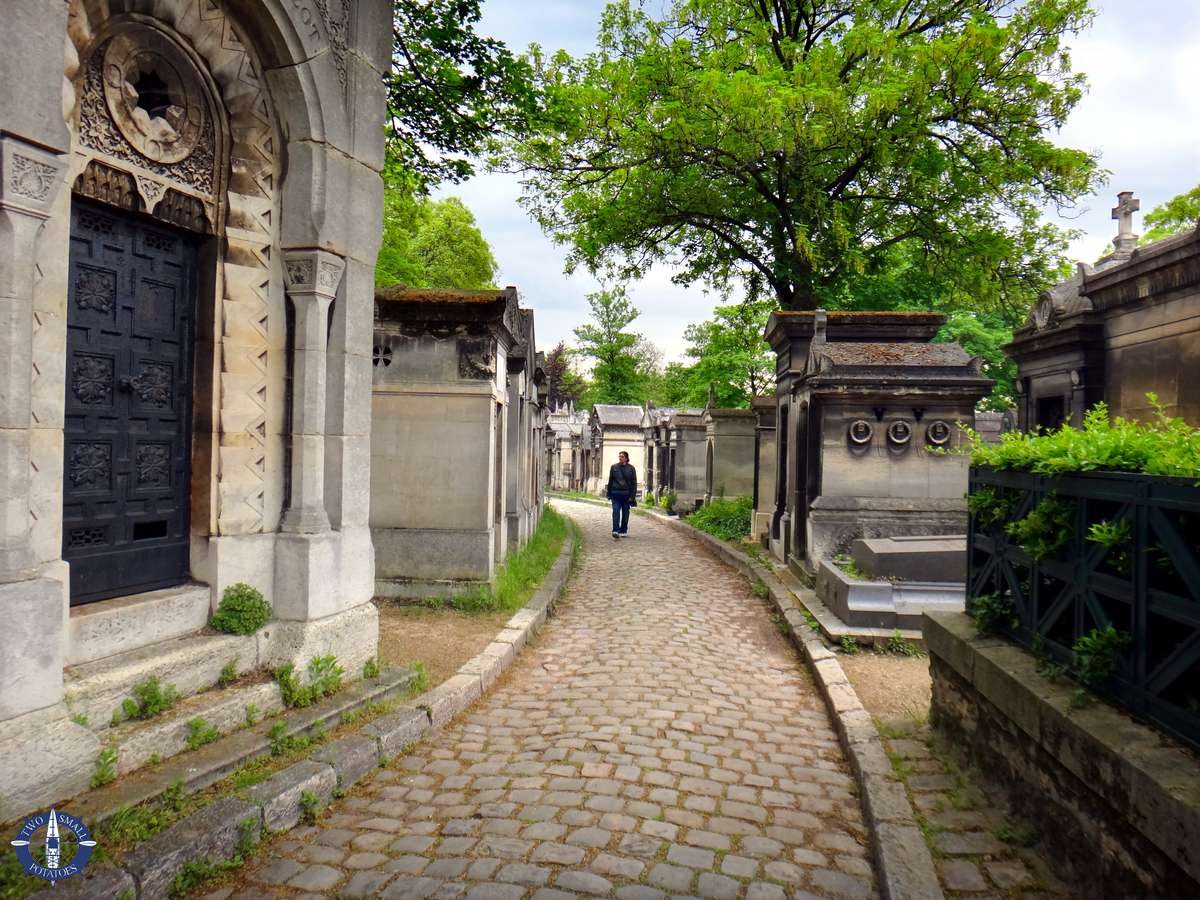 I suppose a giant cemetery might not be the cheeriest place to visit while in Paris, but I was glad we had time to visit. The grounds are beautiful and peaceful, a surprising oasis of green calm in the bustling heart of one of the world’s largest cities.

Know Before You Go
306 shares