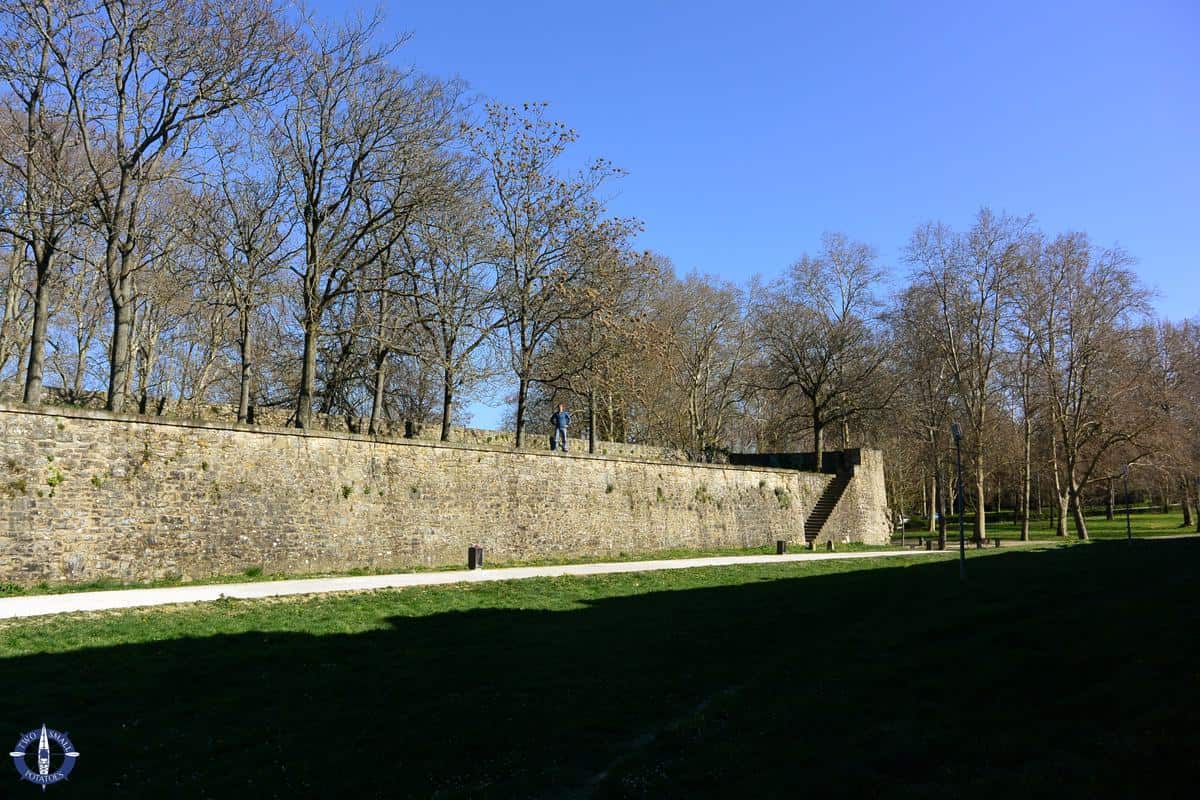 Have you ever slept in your car?  If so, you know it’s not the best way to spend a night, with no way to lay flat or really stretch out your legs.  After sleeping in the VW the first night of our road trip to Spain, my stiff back was forgotten as soon as we stumbled into the Aire de Service de la Corrèze – the fancy French equivalent of a Flying J for truckers in the States – and were hit with the smell of coffee and fresh pastries.

Multiple banks of automatic coffee dispensers lined the walls like slot machines at a casino.  I did, in fact, feel like we’d hit the jackpot.  We put in a couple of small coins, selected the largest coffee available, and watched in awe as the machine slowly lowered our cups, then filled them with fresh, strong coffee.  I have no doubt that Heaven smells like coffee and fresh-cut grass, minus the allergies.  Maybe this kind of gadgetry is common in Europe, but it was a first for us for even the cup to be dispensed.  We ordered nearly a dozen mini beignets from the adjacent boulangerie and got back on the road, enjoying our tasty breakfast.

The night before when we’d tried to exit the main freeway to find a place to camp, we’d been frustrated to find toll booths blocking every exit.  They made searching for a campsite so frustrating, we’d given up and slept in our car at the service station.  But come morning, our decision paid off since we were grateful to be able to exit the Aire de la Corrèze station immediately back onto the freeway without additional tolls.

Nearing the perimeter of Bordeaux, we veered south, celebrating when we reached the Spanish border near the Bay of Biscay.  It was Trav’s first time in Spain and my first visit to Basque country, a region which encompasses northeastern Spain and part of southwestern France.  We almost immediately turned off the main road onto a narrow 2-lane highway empty of traffic and began to relax.  The terrain grew more wild with mountains and rolling hills striped with steep ravines and clear, rushing streams.

Inexplicably, we felt more at home than we had anywhere in France.  Perhaps it was simply due to the rugged landscape with tiny towns and few people.  We quickly realized that each town had a sign with its name as we entered, as is common in the US, but also had a sign as we were leaving.  Some towns were so small, the “entering” and “leaving” signs were just a handful of meters from each other, like in the town of Maquirriain.  Trav grew up in a town in North Idaho with a population of about 50 people; this town made his seem like a metropolis!

As soon as we pulled into Pamplona, our first goal was to find a place with WiFi.  We’d realized that even if we drove straight through to Madrid, we wouldn’t arrive until well after our friend and her parents would likely be asleep.  We needed to let her know we wouldn’t arrive until Monday and didn’t have a way to message her.  Considering that it was Easter, finding WiFi turned out to be a challenge – even McDonald’s was closed.

Luckily KFC was open, so we jumped online to send AG a message and grabbed lunch while we were there.  Though it hardly seems like a fitting Easter lunch, we hadn’t been to KFC in years.  It was actually a treat, particularly the ice cream cones we bought with a 5 euro bill some friends in Oregon gave us with a going-away card when we moved to the Switz.

We laughed on our way out when we saw the advertising slogan in their window: “Rustic Potatoes: The Envy of all the Potatoes.”  It seemed strangely ironic that Two Small Potatoes from Idaho – where our potatoes are world-famous – would have lunch on Easter in Pamplona, Spain.  It was one of those moments where it really struck me how odd life is and how you can never imagine where you’ll end up.

But on to some sightseeing!

Though we didn’t run with any bulls while we were in Pamplona or even visit its famous bullring (which is the third largest in the world and seats nearly 20,000), we visited one of the city’s coolest features: the ancient city and fortress walls.

Like many cities in Europe, Pamplona has been inhabited for millennia.  Ancient tools that date back to 75,000 years ago have been unearthed near the River Arga, which runs through the city.

A permanent settlement was established on the site in the first millennium BC, a settlement which was initially called Iruña, or “the city,” in Basque.  Eventually pillaged by Visigoths and Moors, its own inhabitants burned and massacred residents of a local borough in the 1200s.

After walking some distance along the length of the fortress walls, we finally found an entrance over a small drawbridge.  At one time it would have overlooked an expanse of water, an additional line of defense against would-be invaders.

Surrounded by a ring of mountains and nestled in a central basin with a warm Mediterranean climate and little rainfall, it’s easy to see why folks would want to settle in such a place.  And it’s understandable that such a settlement would require massive walls to protect the fortress within.

Venturing deeper into the heart of the old city, we moved away from the fortress walls.  We discovered ancient narrow streets with buildings so close together on either side that the light barely reached the street.

As we walked, we kept our eyes focused on the spires of a cathedral, first passing the back side of it with its austere brick walls soaring sky-high, and then catching a narrow glimpse of it through the bars of a small private gated entrance.  But where was the entrance?  We kept walking and walking.  After no small amount of searching, we finally entered a small plaza tightly hemmed in with buildings and were greeted with a splendid view of the cathedral bathed in the early evening light, framed with a brilliant blue sky.  Hallelujah, we’d found it!

Since it was closed – understandably, since it was early evening on Easter – we merely enjoyed it from the outside.

I liked the giant sundial that was affixed high up on one of the corner towers.  Years and years ago, my mom made a beautiful horizontal sundial for my grandpa out of a slab of polished dark wood and metal bars for the Roman numerals.  He passed away a few years ago, and I found myself wondering what ever happened to the sundial.  I wished that my mom could be there to see this one, as I knew she’d like it.

It does seem that where there’s one church, there’s another, and we passed so many, we lost count.  Trav noted it must have been sad for all the small local churches when a larger, more grand cathedral was built in the same plaza.  Neglected and with few visitors, we passed many of these little churches, still beautiful, with their own largely untold stories and small groups of loving devotees.

As we wandered through the old city of Pamplona, we periodically heard music with live bands in the streets and throngs of young people singing and dancing, celebrating Easter.  Their joy was infectious.  We passed one final street with standing room only before leaving the fortress.  I liked Pamplona so much, I hope we can return someday and spend more time.

Back on the road, we headed west instead of due south to Madrid.  Our next destination?  Burgos, Spain – with one unexpected stop in between!  Though it would add a few kilometers to our route, we were excited to see the famously magnificent Gothic cathedral in Burgos that AG had recommended.

Knowing we wouldn’t make it before dark, we planned to find a camping place nearby.  Not far from the town of Logroño but still in the region of Navarre, we saw a large rocky mound high up on a hill, barely visible in the fading light of day.  It appeared to be some sort of castle or fortress, but not one with the clear silhouette of a castle on a hill we’d become accustomed to seeing.  The slopes of the small mountain were covered with trees that gave way to a charming little village and acres of vineyards.

On a whim, we pulled off the only road we saw into town and snaked our way through the tiny village, making turns we thought might lead uphill.  Sure enough, we found a sign with the name Castillo de Monjardín pointing up a one-lane dirt road that provided little challenge for even our very low-carriage 4WD VW.  Our old 4Runner would have outright mocked this poor little country road with its minor ruts and potholes.  It still felt good to be doing a little off-road adventuring!  Topping the final rise, we hopped out of the car and investigated what looked like a large old pile of rocks topped with a spare metal cross.

It really was a castle, albeit one that stopped being maintained long ago.  Not only was it slowly crumbling back into the earth and a bit eerie in the twilight, but it was completely deserted.  This was our kind of place!

We had found a camping spot for the night, so we set about making some chili for dinner with our camp stove.  Savoring it with a loaf of fresh bread we’d bought earlier in the day, we reflected on the wars that raged in these lands over the centuries.  Breaking into a moment of quiet reflection, Travis said, “Do you realize that a thousand years ago on this same spot, someone died – right here?”

Gah!  Food for thought, Travis.  Thanks.

Despite his dark ruminations, we were graced with a  beautiful sunset as night fell, making it a truly unforgettable Easter.  I fell asleep excited to investigate the entire castle the next morning.

Type to search or hit ESC to close
See all results
wpDiscuz
1
0
Don't forget to leave a comment!x
()
x
| Reply
We use cookies to ensure that we give you the best experience on our website. If you continue to use this site we will assume that you are happy with it.Got it!