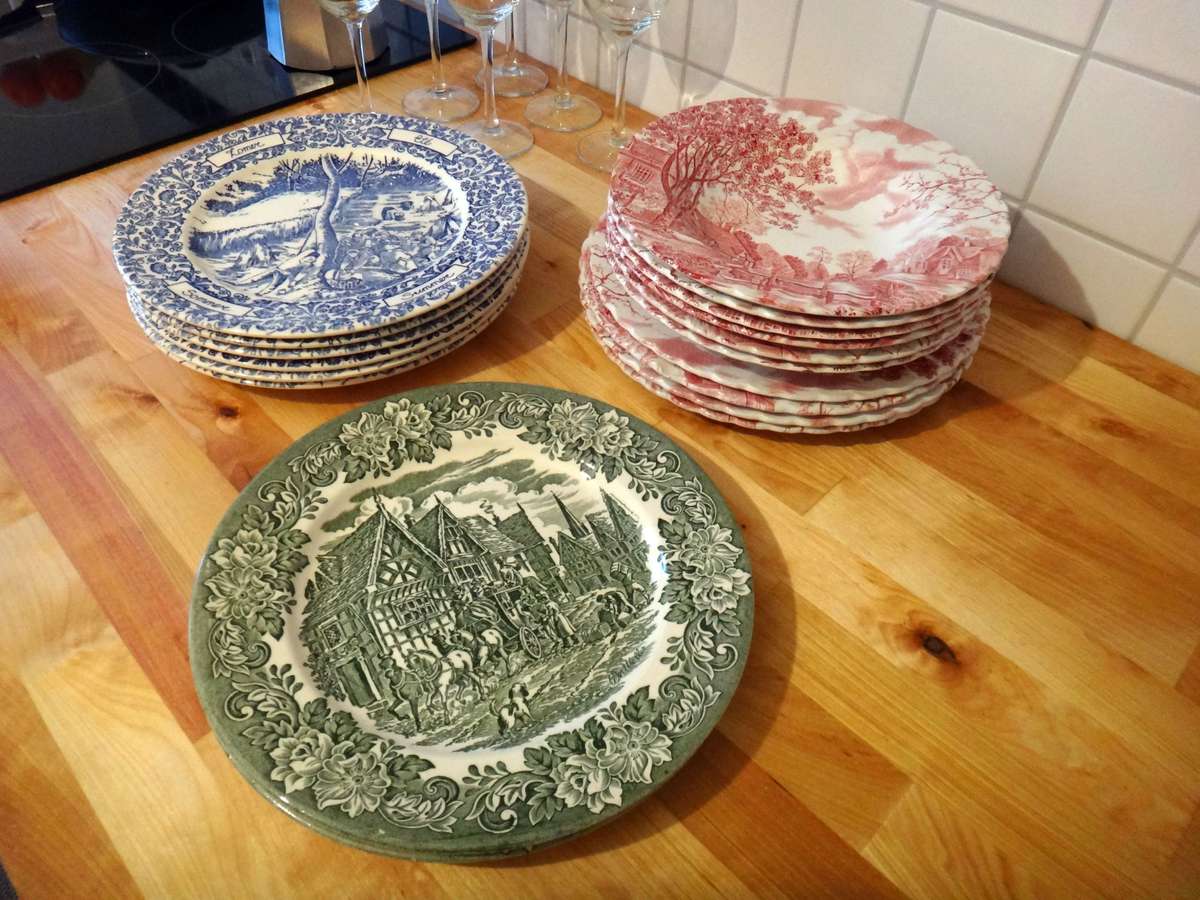 Well folks, it’s impossible not to laugh a bit in irony when we look back at our household purchases for the last couple of years.  Nineteen months ago, we sold almost everything we owned in the United States to move to Switzerland.  We found a gorgeous three-bedroom flat almost the same size as our house in Oregon, then spent months trying to fully furnish it on a budget.  Six months ago,  we downsized to a studio apartment when Travis lost his job, selling off much of what we’d purchased.  For the most part, we sold things for what we’d paid for them since they were all used.  The irony is that we’re now back in a three-bedroom flat that’s the same size as our original flat in Switzerland, and again, we’re in need of furniture.  Our flat actually echoes, it’s so empty.

When we furnished our Swiss apartment, it was almost exclusively with used furniture, most of which we found at Emmaüs, a huge warehouse filled with second-hand bargains. They have everything there that a person could need for their home, from furniture, dishes, and small appliances, to books, clothing, and bedding.

Assuming we would do that again here in Germany to refurnish our current flat, we instead found the second-hand shops rather disappointing.  We were confounded, since our impression of Germans so far has been that folks in general are quite thrifty, reusing and recycling whenever possible.  It’s awesome!

But what do these folks do with all their unwanted used possessions in Göttingen?

Apparently, they sell them on eBay, but not the “regular” German eBay.  Germany not only has a normal eBay site, www.ebay.de, which is the equivalent of our ebay.com (and similarly seems to have been overrun with retailers), but they also have another site, www.ebay-kleinanzeigen.de.

With this second site, we hit the jackpot.  With no user fees or seller fees and functioning much as Craigslist does, we’d stumbled across it before.  It wasn’t until we actively started shopping for household items and furniture, though, that we realized the site is pure gold – gold I tell ya!

That is where all the bargains are hiding.  And that is where I’ve lived since we returned from Switzerland with our moving van on January 11th.

For the first week or so in our new flat, we managed without plates or bowls, mostly using our aluminum camping mugs.

In Switzerland, Simone generously loaned us a set of dishes her mother had left her, a set we returned when we moved to Germany.  Dishes were something we quickly realized were scarce at second-hand shops here, but we lucked out on eBay.

Though the set we found is mismatched and not necessarily our style, they were well worth €5 – we’ll definitely get our use out of them in the next two years!  Besides, they’re somehow charming since we live in Germany, with their pastoral scenes of life in Europe from the days of yore.

Our biggest haul of goodies came from a single seller, a Russian gentleman and his family, who had several pieces of pine furniture listed.  When I scheduled an appointment to go see one of them, a computer desk, he told me that someone had already committed to taking most of the other items, including a gorgeous armoire for only €80.  When we met with him to see the desk, we realized it was a crazy low price.  Every piece he was selling looked brand new, and we’d just seen the exact same armoire in a Danish store in town that was priced at over €500.

Lucky for us though, when we arrived to pick up the desk a few days later, the seller told us the other buyer had backed out, so he offered everything to us instead.  We emphatically said Yes! to the armoire, another dresser, and a trundle bed that’s perfect for our guest bedroom.  He even threw in a night stand for free!  It took us several hours to take apart all of the furniture at his flat, we had to make two trips to our place, and the bed had to ride strapped to the roof, but it was definitely worth it.

The dresser is now in our room, and we moved the first one we bought to our entry area near the kitchen.  With handles that perfectly match the ones in our kitchen, it’s a perfect spot.  Since we have a huge clothing armoire in our bedroom already, we’ll likely use the new one in the guest bedroom.  It kills me not to use it in our room because it’s so gorgeous, but our apartment has bizarre ceilings with overhangs that limit where we can put taller furniture.  It’ll still be handy in the guest room for us to store all of our kayaking, camping, and backpacking gear (except for the Orus – they’re not that small).  Since the armoire is a bit of a doozy to put together, its many pieces are still spread across several rooms.

Up until a few days ago, the one purchase that continued to elude us was a washing machine.  We’d responded to countless ads on every make and model imaginable, but they were always gone by the time we responded.  Even if we saw the ad within an hour of its posting, someone would have already scooped it up.  Since most were listed for around 50 bucks, it’s not a surprise.  And it’s probably the reason that when we did finally land one, it was a bit more expensive – €85.

When we arrived to pick it up, the darned machine was so blasted heavy that the seller called her boyfriend to help Travis move it.  I couldn’t even lift it, let alone manage getting it up all their stairs from the basement.

Back at our apartment, we were both too stubborn to call a friend to help us get it down our own stairs, so we backed up the VW to our front door and managed to at least get it inside the entryway. Using huge flat sheets of cardboard left over from our IKEA kitchen, we rigged up a nifty little system to slide it on its side on the cardboard down the stairs.  At the bottom, we stood it upright, turned it 90 degrees, and laid it back down on another piece of cardboard.  It was remarkably easy to slide the entire shebang all the way into our bathroom, which is unfortunately where the washer hook-up is.

Grateful to have our own washer again for the first time in months, I spent a half a day catching up on laundry once we deciphered the bizarre mixture of symbols and German writing on the controls.

After two weeks of intensive nearly non-stop daily shopping on eBay, our purchases have slowed to a trickle.  As of today, we had only a single item left on our watch list – an adorable white leather chair for 30 bucks that looked perfect for my art studio.

By the way, why are almost all the big, cushy office chairs black?  What is that about?!  Liven it up, people!

I couldn’t resist zipping down the hill today to pick it up, and I’m already looking forward to future bead projects from the cockpit of my new comfy chair.  Maybe eventually we’ll get a second chair so Travis can sit down too, but for now, I’m the only one at the helm.

Though I always love bargain shopping, enough is enough.  By now, I’m so tired of perusing eBay listings twice a day, taking apart furniture, loading it in the car, unloading it at our flat, and putting it back together that I’m officially on vacation from eBay.  We can finally take a breath and spend our evenings unpacking (woohoo!) rather than making nightly trips to strangers’ houses, carrying off their possessions like pack rats furtively building a den under the cover of darkness.  That being said, if you have a bargain you think we can’t live without, give us a buzz.

Type to search or hit ESC to close
See all results
wpDiscuz
10
0
Don't forget to leave a comment!x
()
x
| Reply