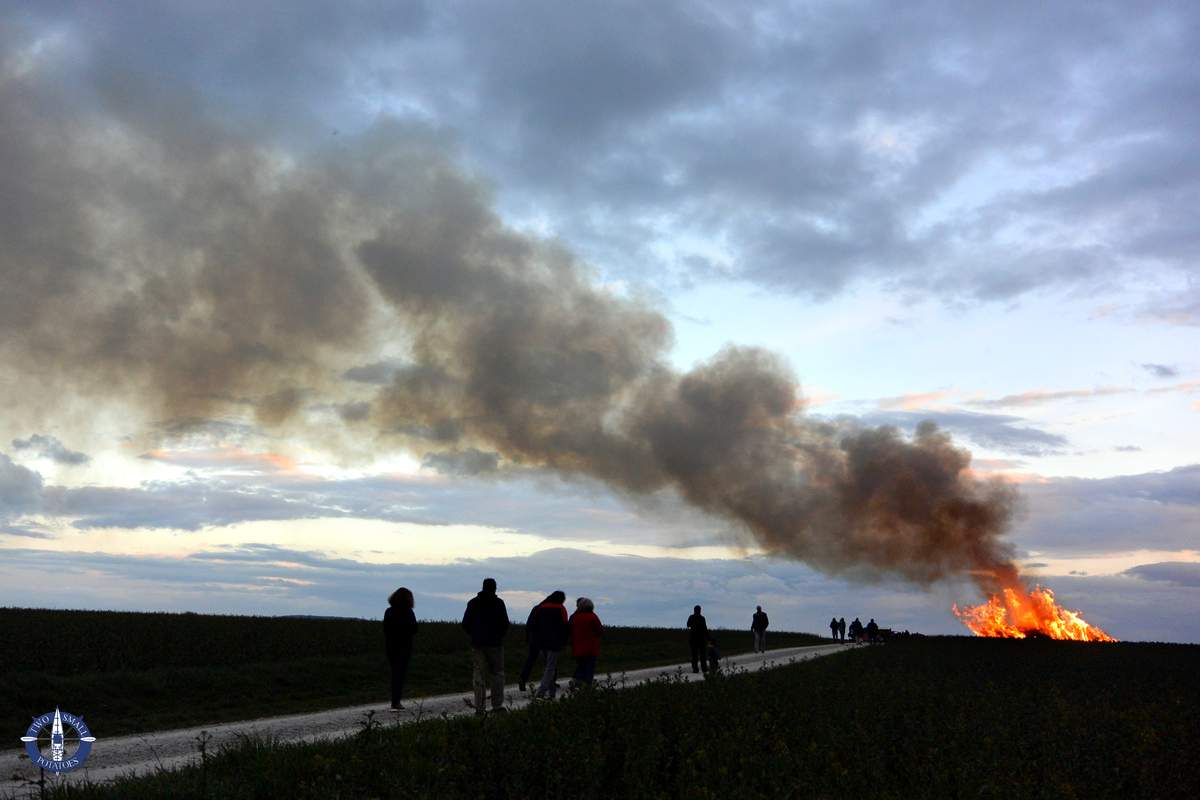 Osterfeuer: Learning About New Traditions for Easter in Germany

Expat Life in Germany
April 25, 2018 0
*This post may contain affiliate links. If you purchase through these links, we may receive a small commission at no extra cost to you. We only recommend companies we trust!

Imagine heading out for your daily walk, the same walk you’ve done a hundred times before. Throw on the dog’s leash, head a block down, a block left, and you’re out of town. Depending on the time of year, you’ll be surrounded by acres of pungent yellow canola flowers or waving blue-green wheat. Now imagine that the time of year is early spring and the fields are all plowed under. But what is this mountain of debris next to your trail, and what could it possibly have to do with Easter in Germany? Perhaps you’ve already heard of the Osterfeuer, but during our first spring in Germany, we definitely had not. We ended up liking this unusual event so much, we’ve made it an annual tradition every year that we’ve lived in Germany when we’re not traveling over the Easter holiday.

Who loves to set stuff on fire for Easter? The Germans do, that's who! Click to Tweet

Why on earth do people light HUGE bonfires on Easter in Germany?

While there’s some debate about its origins, the tradition harkens from pre-Christian times when Easter bonfires symbolized burning away the darkness of winter. They welcomed in the spring, and with it, new life. They signified rebirth, growth, fertility. Ashes from the spent fires were later spread on fields to replenish the soil.

In later years, the bonfires were integrated in religious celebrations, particularly for Catholics. Easter mass with fire became common. A fire would be lit outside the local church at night, then blessed by the priest. He would light a single candle from the fire, then lead a procession into the dark church, symbolically bringing light to the darkness.

Nowadays the Osterfeuer has lost much of its religious meaning in Germany. Instead, it has become a community tradition that draws crowds from every nearby village and farmhouse.

What should you expect at your local Easter fire?

In true German fashion, it really wouldn’t be a right proper celebration without

You’d be hard pressed to find a gathering of any decent size in Germany that doesn’t have beer and sausages. They pretty much go together like mac and cheese.

Language Tip: If you don’t speak any German, make sure to at least memorize this. Ich brauche dringend dein größtes Bier, bitte.

What else can you expect at your local Easter bonfire?

Obviously a big ol’ bonfire! Probably the largest you’ve ever seen. Our local Osterfeuer is so huge, it would impress even the pyro in your family.

Expect a lot of people too. In our little village of just a few hundred people, more than half probably showed up at our Osterfeuer. We’ve had clear, cold weather every year we’ve visited, with some years drawing a larger crowd.

Let there be Brot!

Why? Because it’s Germany!

For those who don’t know, Germany is really famous for its bread. This is actually something we’d never heard before moving here, but Germans pride themselves on the variety and size and shape and weight and color and density of their breads.

Want to inflict the worst insult imaginable on a German? Say you prefer American white bread. Click to Tweet

So I suppose it’s only natural that they’d bring bread dough to roast over an open fire at an Easter bonfire. It probably makes about as much sense to foreigners as roasting giant squares of puffed sugar, so no judgment here.

I absolutely LOVE bread, so I was pretty excited to give this a try. Travis was much less impressed. To him, bread is bread is bread.

As it turns out, I found the act of cooking the Stockbrot far more entertaining than actually eating it. Recipes differ for this type of campfire bread in Germany, but the variety we tried was very basic: just a bit of flour, water, and maybe a dash of salt.

It was fun to make though, and it was free. Some of the locals had made up a huge batch of bread dough and pre-wrapped strips of it around the end of sticks. They handed them out for free to anyone who wanted to cook them. Perhaps part of my problem is that I prefer the blackened husk of a truly burnt marshmallow to the golden brown that comes with patience. Turns out, burnt bread isn’t nearly as good as burnt marshmallows.

Can you bring your kids to watch the Easter bonfire?

Again, like sooo many things in Germany, absolutely. Kids are definitely welcome.

If you’re a helicopter parent – you know, those who worry about their kids falling into a massive open fire and being burnt to a crisp – then this probably isn’t the place to bring your kids.

But Germans definitely do. The parents love it. The kids have a blast. Even the firemen who are on high alert for the stray fire set by overzealous kids take it all in stride.

When can you plan to see an Easter fire in Germany?

It’s a fairly safe bet that if there’s an Osterfeuer near you in Germany, it’ll be lit shortly before dark on Easter Sunday. Most are allowed to burn through the night, though some aren’t put out until Monday. Not all areas of Germany have them though, and they’re not uncommon elsewhere in Europe, especially in the Netherlands, Switzerland, Austria, Denmark, Sweden, and Finland.

If you’re not sure where your nearest Osterfeuer is, the easiest thing is often to simply ask your neighbors. They’ll likely be “in the know” and be able to tell you exactly where and when to show up. If that doesn’t work, ask co-workers, friends, or contact the local tourism office. Of course, you can always Google it, but the finer details of Easter bonfire celebrations often aren’t available online, especially in English.

If all of that fails, simply taking a walk or driving out into any fields near your town or village at dusk on Easter Sunday might be all you need to do. This worked for us, since we discovered our local Easter bonfire entirely by chance during our first spring in Germany.

Weeks before Easter, we wondered at the growing mound of debris on the edge of Nikolausberg, our village in Lower Saxony. Then just at dusk, we happened to be out taking our dog for a walk in the fields. On the way home, we passed a steady stream of people heading out into the fields. We went home to drop off the dog, and by the time we came back, the bonfire was already lit.

I’ll always remember that first Osterfeuer in Germany – the curiosity and wonder, joining arm and arm to toast warm Brot and cold Bier with our neighbors.

Have you been to an Osterfeuer in Germany?

Or do you live somewhere else that celebrates Easter with a huge bonfire? Let us know in the comments below!

Know Before You Go
Take a minute to PIN it!
135 shares