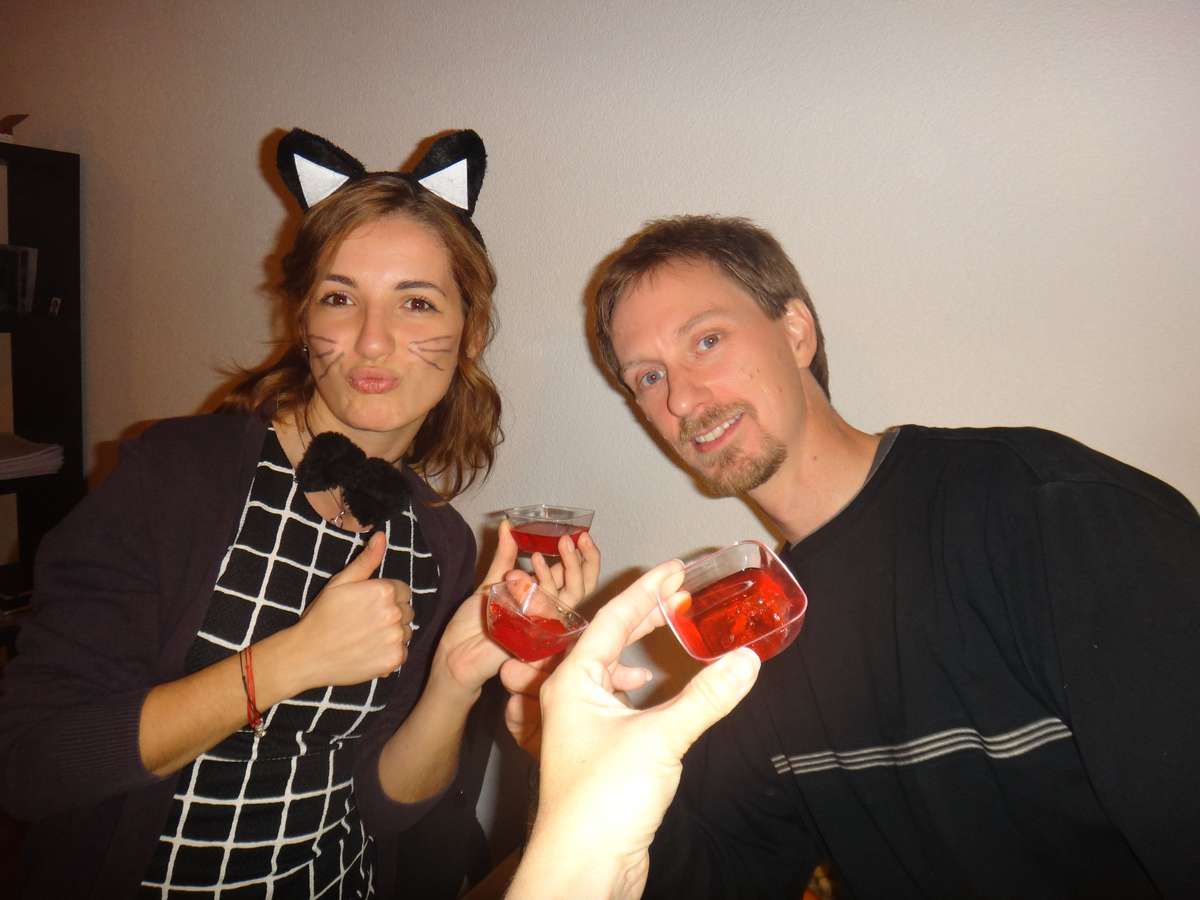 A Night With Sexy Kitty

Our plans to leave Switzerland on October 1st didn’t materialize.  Like everything we do, even our travel plans from Switzerland to Germany were ill-planned and subject to change.  After just a few hours of sleep, we woke up on Halloween to finish cleaning our flat in Onnens.  With Simone’s help, we had it ready to go for the new tenant just after 10 am.  Though we couldn’t directly communicate with the new tenant because of the language barrier, we liked her immediately and felt comfortable leaving our furniture in the flat for her.  We’ll have to make arrangements through Simone once we’ve found a flat in Germany as we’ll be returning for our furniture in Onnens, and she’ll need notice in order to replace it with her own furniture.

Once the paperwork was completed for the new tenant, Simone invited us over for a coffee, which we gratefully accepted.  After only a few hours of sleep and the chaos of the morning, we’d had neither breakfast nor coffee, and we were both tired.

She, Carlos, and Nicole then whipped us up a superb lunch of Basmati rice with coconut, garlic, and peppers, shrimp in a mushroom sauce, and deep fried bacalhau (salted cod).  Stuffed to the gills and reluctant to say goodbye, we gave our little Onnens family a final round of hugs before pulling out of the driveway.

Our original plan had been to drive straight to Germany on Halloween, but we still hadn’t received confirmation from our Airbnb host in Germany that they had accepted our booking request.  Because the new semester at the local university in Göttingen just started in October, housing is so unavailable right now that students have booked up most of the local Airbnbs, guest houses, and even hotels.  If we had moved to Germany in July, we would have had a better chance of finding even temporary lodging and at more affordable prices.  Because the Airbnb we’d found was labeled as “pet friendly,” we didn’t foresee a problem.  Unfortunately they declined our request because of the pets, leaving us with no back up plan for a place to stay upon arrival in Germany.

When Larisa, a friend near Fribourg, offered to let us sleep at her place for the night, we thankfully postponed our trip to Germany, driving instead only as far as Marly just 20 minutes away.   She gave us a key to her flat, told us to make ourselves at home, and we gladly crashed on her couch for a short nap before she got home from work.

Because we were still in Switzerland for Halloween, it meant we were able to go to a friend’s party that evening after all.  Not only do we love Halloween, but it was Larisa’s first Halloween party, so we were excited about sharing it with Sexy Kitty (her costume for the night).

Since Travis and I clearly weren’t prepared, we made do with ghost costumes, old white sheets with no other embellishment than crooked round holes cut out for the eyes.  For us, it was a bit of an  ironic joke, a memory of our childhoods, a throw back to days gone by when we – along with every poor kid in the neighborhood – would at some point go trick-or-treating draped in the family’s cast-off bed linens.  Nobody at the party cared that our costumes were lame.  We didn’t miss out on Halloween after all, and we were able to snag one last night (and morning) with friends.

On the morning of November 1st – the day after the party, we slept in late.  When we finally woke up, we continued searching for an Airbnb where we could stay for at least our first few days in Germany while Larisa made us breakfast.

We were grateful to be able to use her WiFi since we’d cancelled our Swisscom cell phone plans.  October 31st was the last day we had service.

From November 1st, we’ll be without internet except for the random McDonald’s where it might actually be accessible (Switzerland is notorious for only granting WiFi access after a password is sent via SMS to a Swiss phone number, a system not uncommon throughout Europe.  This isn’t helpful if you don’t have a Swiss number or can’t receive text messages.)  We’re also looking for hotels and Airbnbs in Germany with free WiFi until we find an apartment to rent long-term.

Broadening our search for an Airbnb, we found a tiny little wooden “sleep barrel” for rent in Körle, a village about a half hour from Göttingen.  We booked it for that evening plus two additional nights and were exuberant when the owner accepted our request.  Situated on a horse property near rolling green pastures and stables, I didn’t care that the only bathroom facilities were in the nearby stables 25 meters away or that it was a ways from Göttingen.  We finally had a place to stay!

Packing up our things, we carefully loaded up our plants and pets, clothes and enough food for a day or two on the road, and with our hearts heavy, said goodbye to Sexy Kitty.

Once on the motorway, we drove north – headed toward a new life in Germany.