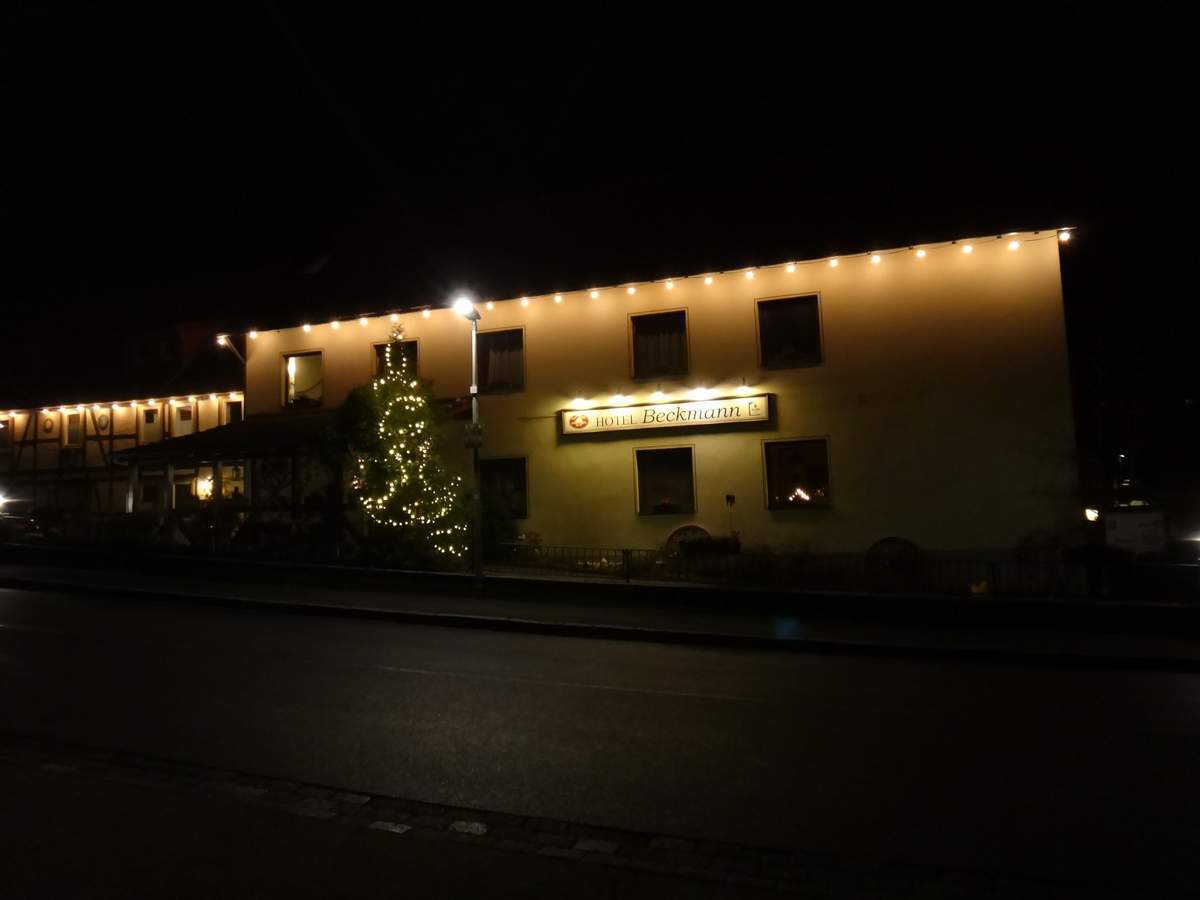 Merry Christmas from the Hotel Beckmann

Merry Christmas! It’s our first Christmas in Germany! We didn’t expect to be spending the holiday in a hotel, but there ya have it.

Since we arrived in Germany almost two months ago, we kept trying to book a flat at the Hotel Beckmann. Just up the road from Trav’s lab at Max Planck, it was highly recommended by several of his co-workers. It offers both traditional hotel rooms as well as long-term guest apartments with full kitchens, and their latter option would have been ideal for us for the past two months that we’ve been in temporary housing. The Beckmann’s monthly rates cost significantly less than the nightly prices we’ve been paying everywhere else we’ve stayed.

Unfortunately, probably in large part due to its popularity, the Beckmann’s been booked nearly solid since our arrival.

Each time we bounced from one Airbnb or guesthouse to the next, Travis would email or call the hotel to check availability, always receiving very friendly, prompt responses, typically from Herr Beckmann himself. And each time they confirmed their guesthouses were still full, I’d stare wistfully at the hotel when we drove past on our way to see another flat in Nikolausberg. It always looked so cozy and inviting with its strands of twinkling white lights laced along the eves, more glowing from the branches of a live Christmas tree out front.

After finally signing a lease on our new flat in mid-December, we still couldn’t move in for another couple of weeks. Since we were paying quite a bit where we were staying at the Waldhauser II, we stopped by the Hotel Beckmann once again to find out if they had any openings.

Meeting Herr Beckmann for the first time, I liked him immediately. He recognized Trav’s name from previous contact, listened while we explained our need for an open-ended reservation until our new flat would be ready for us to move in, and promptly showed us two different flats that were available. Letting us take our pick, he even assured us he could meet us for check-in the following day, Christmas Eve.

Though we’d assumed we’d have no choice but to spend Christmas at Waldhauser II, we instead spent the morning of Christmas Eve packing again and moving to our new temporary apartment at the Hotel Beckmann.

We still needed to pay for the two weeks we’d been at the Waldhauser II, so while I packed, Travis ran downtown to Commerzbank to withdraw money.

Because the bank was closed, he had to use the ATM for the first time in Germany. While he was trying to decipher some of the instructions in German, the machine sucked his card in and absolutely refused to give it back. Apparently, the card was not merely confiscated but completely destroyed, so he’s currently waiting for a new one to arrive in the mail.

Making arrangements to pay via online bank transfer instead, we happily checked out of the Waldhauser II. After weeks without WiFi at either Waldhauser I or Waldhauser II, we were very much looking forward to our cozy new flat with free and unlimited WiFi!

Rather than snow or blustery winter weather, our first Christmas Eve in Nikolausberg was sunny and beautiful as we settled in at the Hotel Beckmann.

As Travis and I unpacked a growing number of kitchen items and stowed our clothes, Tica and Touille snuffled around another new and interesting place.

All “moved in” by late afternoon, we settled in to relax for the evening.

With no particular plans to go out, I was looking forward to a quiet evening watching some of our favorite Christmas movies: The Grinch (mine) and A Christmas Story (Trav’s).

Instead, a friend sent us a message inviting us to have a traditional Nepali dinner at their place in Holzminden, a small village about an hour from our hotel.

Opting out of our lazy stay-at-home evening, we threw in just about all we had to contribute – a bottle of rum – and drove to Holzminden.  Bummed we didn’t have anything better for our hosts and concerned that I’d be again under-dressed for a fancy Christmas dinner, I was relieved when our friends greeted us at the door wearing casual clothes and warm smiles.

Their friends were all equally open, friendly and easy to talk to. Plus, not only were they not afraid of Touille, our little rat terrier, but a couple of them were huge dog lovers, a welcome surprise when we’ve met so many folks in Europe who are afraid of dogs.

Within minutes, we had drinks in hand – a Cuba Libre for me and a specially aged black beer for Travis. Our hosts’ friends had brought the beer all the way from Düsseldorf.

When dinner was served, our hosts generously filled our plates with Basmati rice drenched in lentil soup, several meat dishes, potatoes, and a perfectly seasoned spicy sauce. Offering us spoons if we preferred, we opted to eat with our fingers as they were, which is customary. Wondering if it would be difficult to scoop up the rice and juices, I was surprised to find it no more difficult, or messy, than sopping up mashed potatoes and gravy with fried chicken, or beans and rice with tortilla shells.

While listening to German Christmas carols, we played a lively “Guess The Famous Character” game for quite some time before everyone opened little gifts the host had stashed under their tree for everyone.  We were touched at the thoughtful gesture, and Trav and I have been using our matching coffee mugs every day since.

We had such a good time, we couldn’t find any motivation to leave until we finally realized it was 3 am Christmas Day and we should go before we’d be too tired to make the hour drive back to Nikolausberg.

Once again this year, our holiday was unexpectedly special because of the people with whom we were able to share it.  Thanks to them, our first Christmas in Germany was fun and memorable!