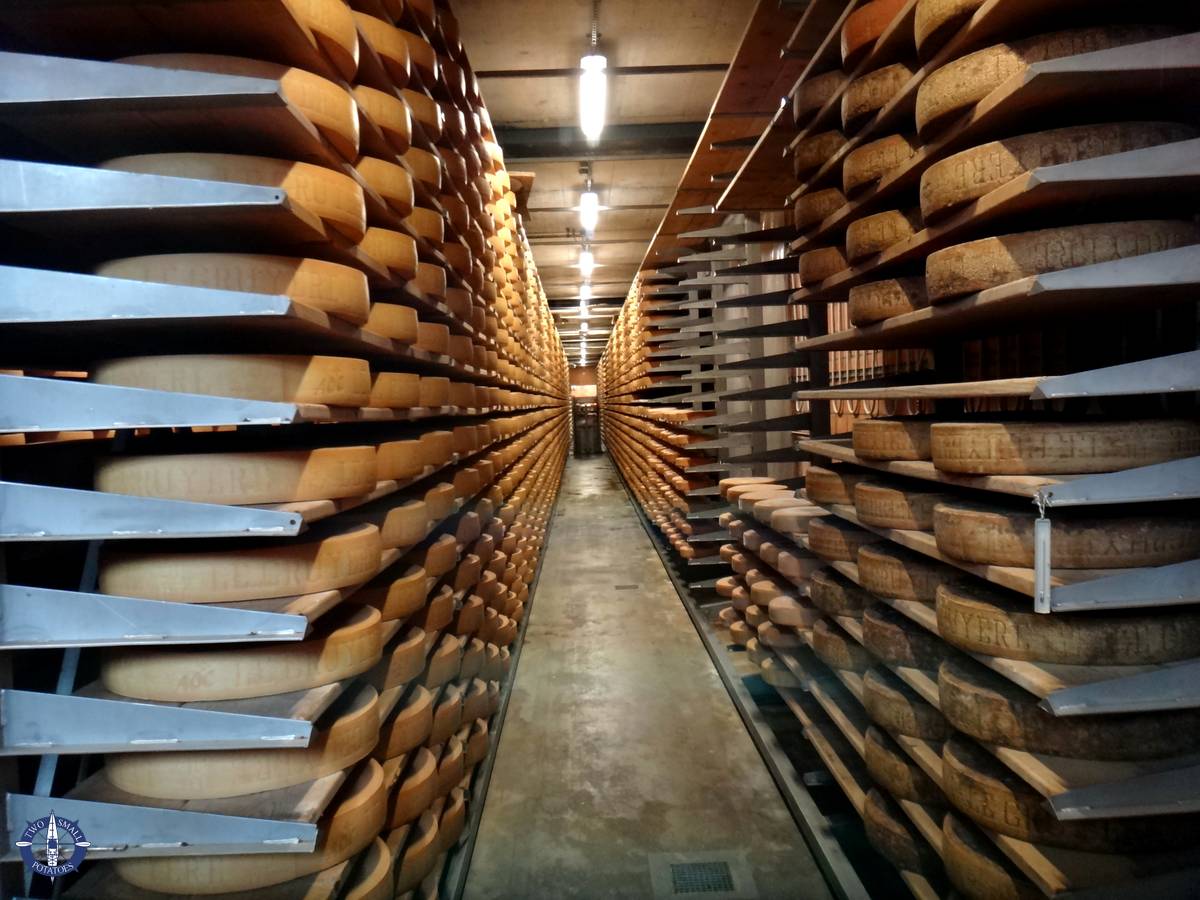 Gruyere Cheese Factory in Switzerland: Everything You Need To Know 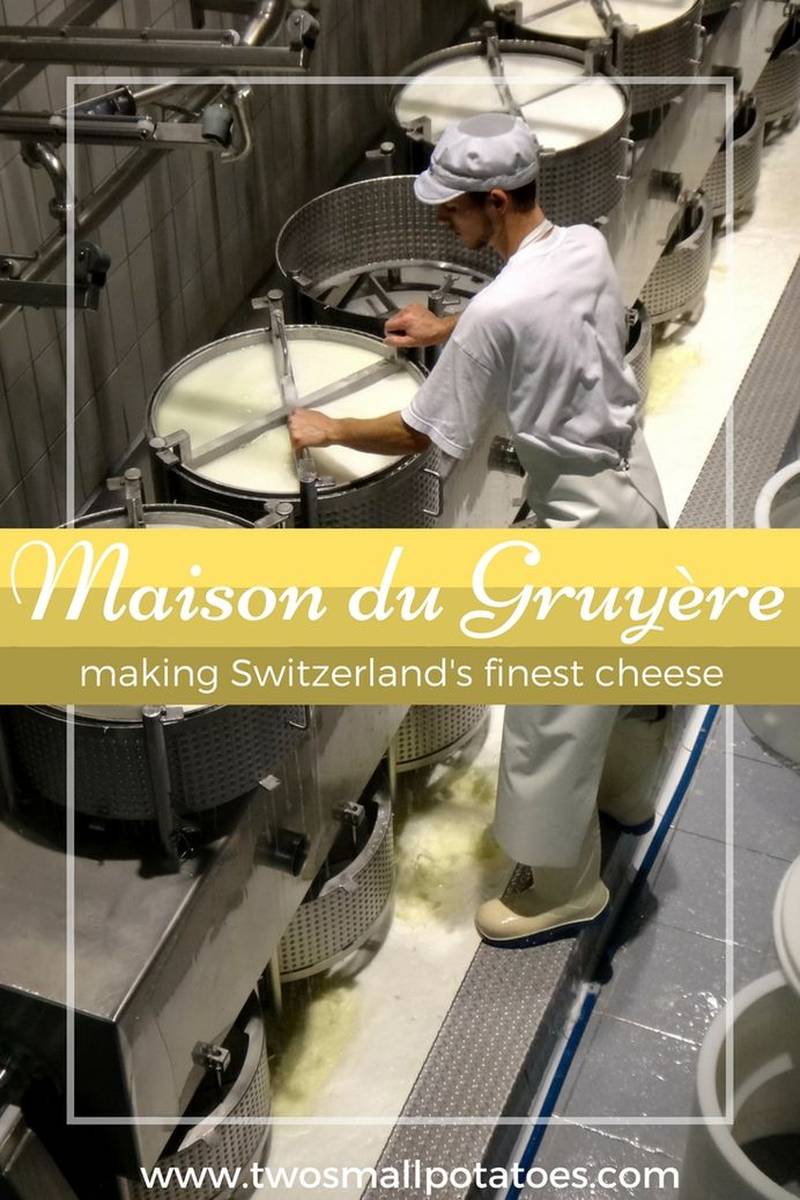 Switzerland is famous for many things, not the least of which is their cheese. Particularly popular is a hard yellow cheese called Gruyère, named after the Swiss town of Gruyères where it originated. During a recent visit to this picturesque little town, we stopped by the Maison du Gruyere cheese factory for a tour of their production facilities and museum.

I’m a bit of a cheese freak, so I expected to like the tour, but it exceeded my expectations in every way. If you’re in the area and love exploring regional edibles, we definitely recommend a visit to the cheese factory in Gruyere.

Tour the Maison du Gruyere cheese factory in Switzerland to see how they make Gruyère, a type of 12th-century regional cheese. Click to Tweet

First up, we should clarify what we mean when we say “La Maison du Gruyère.” This is the official Swiss name of the cheese factory in Gruyere.

The site includes a restaurant, a separate gift shop where you can buy Gruyere cheese and other products, an outdoor play structure for kids, and the entire cheese-making production facilities, which is a working factory combined with a small museum.

A cow eats 100 kg of grass and drinks 85 litres of water per day, producing an average of 25 litres of milk daily.

Is it necessary to book a cheese tour in advance?

No! In fact, the production facility and museum do require an admission ticket, but tickets are only available in person on arrival.

The tricky part comes if you want to watch the entire process of making cheese from start to finish. Then you have to plan your arrival to coincide with their cheese-making timetable.

It’s self-guided with an audio guide, so if you get bored at any point, you can easily skip an exhibit and move on.

Before our visit, we were worried about timing it right, but it all worked out great. We arrived bright and early at 9 am when they opened and caught the first cheese-making tour of the day.

Even for night owls like us, it was a good option. We had the place mostly to ourselves, and we were able to watch the entire process from start to finish.

The tour started off on a good note when we paid for admission and received not just our tickets and English audio guides, but also two packages of cheese samples. Lunch!!!

Travel Tip: Audio guides are included in the ticket price. They’re available in 13 languages, including English, Spanish, French, and German.

I secreted away both packages in my purse, hoping Travis wouldn’t notice, then we pushed our way through the overly secure electronic turnstile to enter the museum.

Who tries to break into a cheese museum?

What’s the museum like at the Maison du Gruyere?

The fun officially begins when you meet Cherry the Cow, the effervescent voice of the English audio guide tour. She’ll introduce you to the poya, the highest alpine meadows where cows graze during the summer, and explain the seasonal movement of cows to the lowlands for the winter months.

The flavor of cow cheese is influenced by what they eat, and Swiss cows love certain plants.

A corridor with information about these plants leads to a row of metal chest-high rods in front of photos of flowers. The cylinders atop these rods are filled with scents corresponding to the photographs of the flowers behind them. Visitors can try to identify the plants just from the smell.

It was a first for us to smell cumin flower!

You might think this adorably tiny cart is meant to be pulled by a pony – but you’d be wrong.

The cart is actually meant to be pulled by a dog.

What a fun job for a kid!

Most of the other exhibits in the museum are plaques and informational graphics that show things like how much Gruyere cheese is produced and what it takes to produce it.

All in all, the museum is rather small, but it’s an interactive and educational addition to the cheese factory.

After you’ve worked your way through the small museum, you’ll reach the fromagerie, or cheese factory.

Though Cherry the Cow only allows you to view the production room from the viewing platform above, you can watch a comprehensive video about the process unfolding below.

We stood transfixed for well over 30 minutes while we watched the video and learned about each step of the cheese-making process.

1. The first step is mixing the milk and rennet.

The process of making Gruyere cheese starts with filling vats with fresh Swiss milk. Cultures are added to mature it.

This is followed by rennet, a liquid ingredient extracted from cow stomach. The rennet curdles the milk, turning it into what looks like one huge solid wheel of cheese on its side in the vat.

A corpse is meat gone bad.

Special knives called “cheese harps” rotate to cut the curds into tiny kernels while the batch is gradually heated to 57°C/135°F.

As soon as the cheese curds are the right consistency, the entire vat is drained into small molds on the other side of the room amid thick plumes of steam.

While the curds are trapped in the round molds, the whey – or watery byproduct that doesn’t become curds – is drained from the molds to the basin below.

The cheese-makers mark each barrel of curds to indicate the number of the wheel and the specific dairy. Numbers are added to mark the date of production.

Workers then seal the molds and leave them for up to 20 hours to be gradually compressed, further reducing the water content of what will become wheels of hard cheese.

3. The wheels soak in a brine bath.

Once ready, the wheels are moved to the next room where they soak in a relaxing brine bath for nearly a full day.

Stacks of cheese wheels are submerged in a salt bath where they absorb nearly half of their total salt content.

4. The cheese wheels are placed in the maturing cellar.

The final stop on the self-guided tour is to the maturing cellar.

Rows of cheese rounds are stacked in their final phase of production after removal from their salt spa. The wheels will remain here on rough spruce slabs in their humid nest for the long process of curing, a process that could take up to a year.

Fun Fact: The maturing cellar can hold up to 7,000 wheels of cheese, which are routinely rotated and brushed with salt water to continue the curing process.

Hungry yet? Grab a bite to eat at the restaurant.

Overcome with hunger during the tour, we returned to the cheese-making room to watch the video again.

Lounging on a bench, we cracked open our sample packages. First sharing a tiny niblet with Trav, we sampled the wedge that had been aged for 6 months. I could tell from the look of distaste on his face that the distinctive bitey flavor didn’t strike his fancy. Not a lover of cheese like I am, he conceded the rest to me.

Slowly munching both of our packages of cheese samples, I pondered the fact that Gruyère cheese has been around since 1115.

No wonder people refer to Gruyere as “aged cheese.”

But seriously, folks, don’t miss the restaurant at La Maison du Gruyere! We came back again later with family visiting from the US to have lunch, and it was fabulous – especially the fondue and ice cream sundaes.

Looking for more great things to do in Gruyeres?

Know Before You Go
Take a minute to PIN it!
23 shares