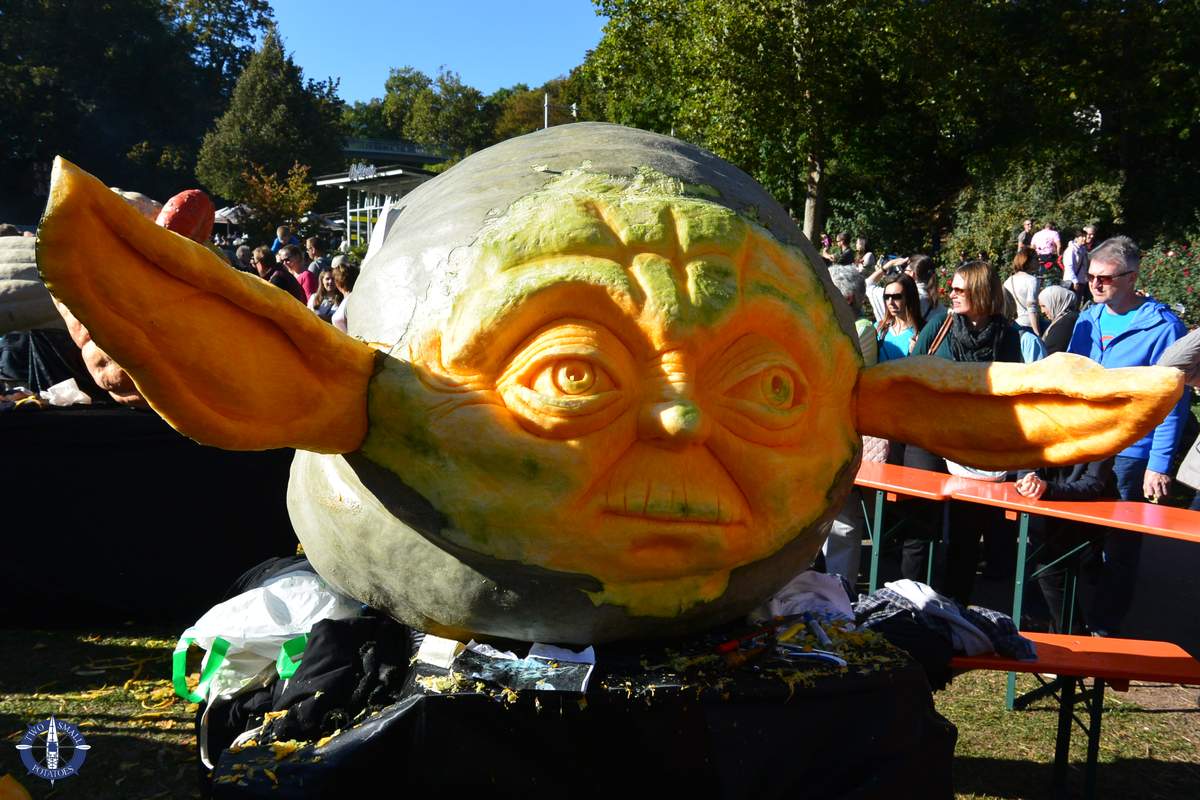 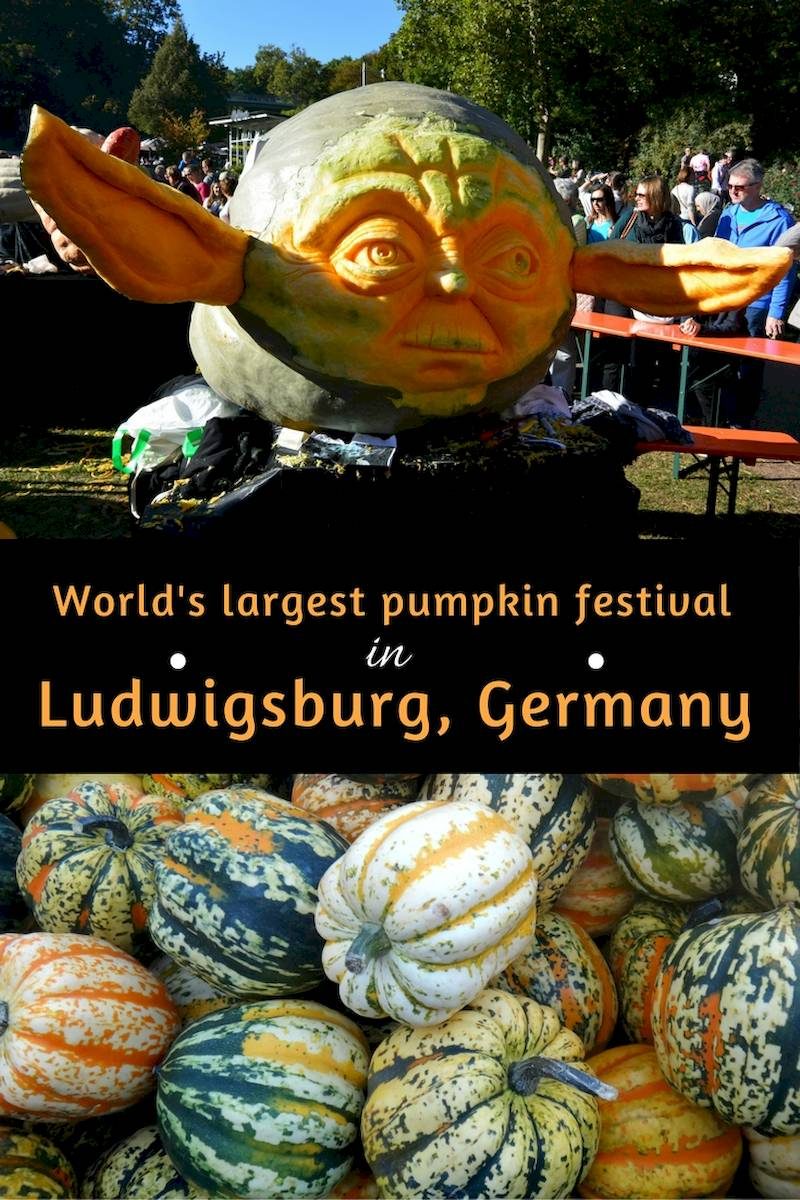 In the US, our infatuation with pumpkins at Halloween borders on the religious. Long gone are the days when carving pumpkins was just for kids! For us, October typically involves a carriage ride to the nearest farmer’s pumpkin patch, picking the perfect pumpkin for carving, and hosting a rockin’ party to turn our newly acquired orange beauties into works of squashy art. While these traditions may be less common in Europe, we discovered this year that Germans share a love of Halloween – and by extension, pumpkins. In fact, the town of Ludwigsburg is famous for hosting the world’s largest pumpkin festival, an event held with considerable pomp and grandeur on the grounds of an actual 18th-century Baroque palace.

Every year, over 400,000 pumpkins are trucked in for the event, which runs from September through November. While some of them are for sale, most are used for decoration. Larger pumpkins are scattered throughout the grounds.

Artists skillfully use many of the smaller ones to recreate scenes and characters based around a theme, which changes each year. In 2015, it was “Flight.” This year the theme is “The Pumpkin Circus is Coming to Town.”

Headed to Ludwigsburg, Germany during the autumn season? Before you visit, check out our travel guide for the world's largest pumpkin festival! Click to Tweet

The festival features about 500 types of pumpkins, including peculiar green varieties, tiny ones, lumpy pumpkins, and those mottled in the colors of fall.

In addition to the large main circus displays, smaller carved pieces are sprinkled throughout the grounds, including peppy little porkers, snakes, and whimsical mice.

Since a variety of events are hosted across the weekends at the exhibition, it’s a good idea to check their schedule to make sure you see what most interests you.

Depending on when you visit, you can plan to see things like the Pumpkin Canoe Regatta where folks race across a small lake inside giant hollowed-out pumpkins. Or you can attend the Gourmet Pumpkin Festival to see chefs concocting Germany’s largest vat of pumpkin soup. We were most excited about the Giant Pumpkin Carving Festival.

I would rather sit on a pumpkin and have it all to myself, than be crowded on a velvet cushion. ~ Henry David Thoreau Click to Tweet

Though we missed the actual European Pumpkin Weigh-Off, the winners were still on display a week later during our visit.

This year, Mathias Willemijns from Belgium set a new record for the world’s heaviest pumpkin, “smashing” all previous heavy-weight titles. His monster pumpkin topped out at  1190.5 kgs – or 2623 pounds! The record officially earned him the top spot in the Guinness Book of World Records.

Besides all the fun stuff to  do and see at the exhibition, what would the world’s largest pumpkin festival be without tasty pumpkin snacks?

In keeping with the pumpkin theme, booths sell things like roasted pumpkin seeds in different flavors. We tried all three, but I think I’ll have to stick with good ol’ fashioned salt. The cinnamon/sugar ones are an odd combination.

For “real” food, a large building that functions as an actual restaurant is set up on site.

The menu includes some pretty standard fall foods, like pumpkin soup and pumpkin muffins, but some rather unique specialties as well.

I ordered kürbus-käsespätzle, which are traditional German cheese noodles with pumpkin.

Travis ordered kürbus-maultaschen – meat-filled pasta squares in pumpkin soup.  The latter was a recommendation from a fellow blogger, Bevchen, who writes Confuzzledom.

Not only was her suggestion spot on – the kürbus-maultaschen dish is so good – but I first found out about the Ludwigsburg Pumpkin Festival on her blog last year.

Stuffed to the gills after dinner, we wandered through the rest of the exhibition.

We ran across Ray Villafane’s hard-rollin’ band of pumpkin characters – the “Hubbard Family.”

An American who’s famous for his pumpkin carving skills, Ray Villafane and other artists from his studio have been invited to Ludwigsburg since 2012 to create a scene for the festival. This year, members of his Hubbard Family sit around drinking, are passed out in pails, make a run for the latrine, lift weights, and engage in general rabble rousing.

In other words, they’re simply charming.

If you’re looking for a fun taste of fall in Germany, definitely don’t miss the world’s largest pumpkin festival in Ludwigsburg. Whether you decide to sample the pumpkin sparkling wine, test your luck in the pumpkin canoe regatta paddling competition, or attend the giant pumpkin carving contest, you’re sure to have fun!

Have you been to the Ludwigsburg Pumpkin Festival?

If so, let us know. Drop a comment for us below!

Looking for more spooktacular things to do near Ludwigsburg?