Lowenburg Castle, Rising from the Mist 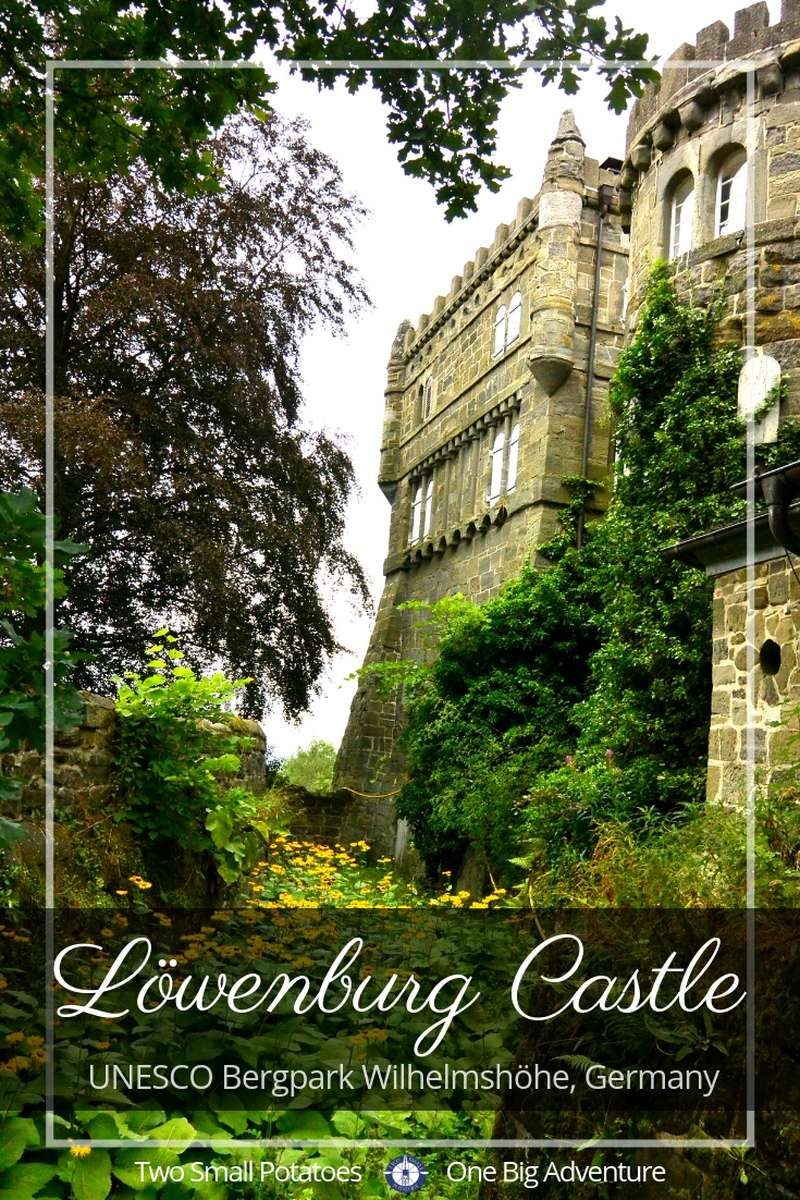 Germany has over 20,000 castles. If that seems a bit crazy to you, you’re not alone!  While we won’t be able to visit all of them while we live in Germany, we definitely have a list of ones that are high priority.  For some time, one of them has been Löwenburg, or “Lion’s Castle” – sometimes also referred to as Schloss Wilhelmshöhe.

The Hercules Statue and water feature are probably the most famous features of the park.   The Hercules Statue itself is a huge octagonal stone pyramid at the top of the hill.  It’s topped with an 8 m tall statue of Hercules, the Roman god famous for his strength.  Stairs allow visitors to climb to a viewing tower high on the pyramid for extensive views of the surrounding German countryside.

The Hercules Monument and water features are currently undergoing renovations to restore them to their original condition.  During our visit, the monument was shrouded in scaffolding, which unfortunately marred ts appearance. The viewing platform was also closed, and cranes surrounded the main water feature. If you’re planning a visit, it might be best to wait until work is complete.

Starting at the Hercules Statue at the top of the hillside, the water feature is a series of carefully crafted man-made channels and waterfalls. It takes just over an hour for the water released at the statue to arrive at the Grand Fountain at the bottom of the hill. The innovative engineering and construction helped seal its protected status as a UNESCO site, one of 41 in Germany.

Unfortunately, it’s not possible to see the water feature in action all the time.  Workers only open the flood gates at the top a couple of times a week, so if you have your heart set on seeing it in action, plan accordingly.

Scroll to end for the official schedule.

From the Hercules Statue, you can descend the steps to the plaza below.  If you’re feeling famished or need a sweet pick-me-up, turn right to the little hole-in-the-wall place with an outdoor eatery.  They serve snacks, ice cream, and the best iced coffee in Germany!

Just a brief jaunt down the hill and you’ll arrive at Löwenburg Castle, one that frequently makes one Top 10 Castles of Germany list or another.

Though it looks like your perfect medieval castle – dark and brooding and fallen into ruin over the centuries, it was actually built at the turn of the 19th century.

The interior was closed during our evening visit, but I’ve heard that it’s quite posh inside with Baroque decor.  We briefly peaked through the cold metal bars of the front entrance, then continued exploring the perimeter.

A series of arched walkways near the castle leads visitors to more walkways hemmed in with hedges and the occasional fountain or statue.  Plan on spending a half hour or so wandering among the fountains, statues, and carefully arched hedges.

As a country estate, Bergpark Wilhelmshöhe also offers a beautiful, fairly extensive system of trails, several of which lead from the castle back to the Hercules Statue and parking area at the top of the hill.

If you opt for public transport, you can simply hike a bit further downhill back to Kassel or catch a bus below the castle without having to hike back uphill.  If you don’t mind the exercise, though, you can always hike.

For those interested, Bergpark Wilhelmshöhe includes a museum, luxury hotel, and other attractions we didn’t visit. You can easily spend an entire day exploring the sprawling UNESCO site.  Just make sure to check the opening hours for each separate attraction because they aren’t open at the same time, particularly with current renovations.  If you’re flexible though, just swing by anytime and you can explore park grounds for free.  Even on a gray and drizzly day, it’s a beautiful place to spend a few hours outdoors.

Know Before You Go
70 shares