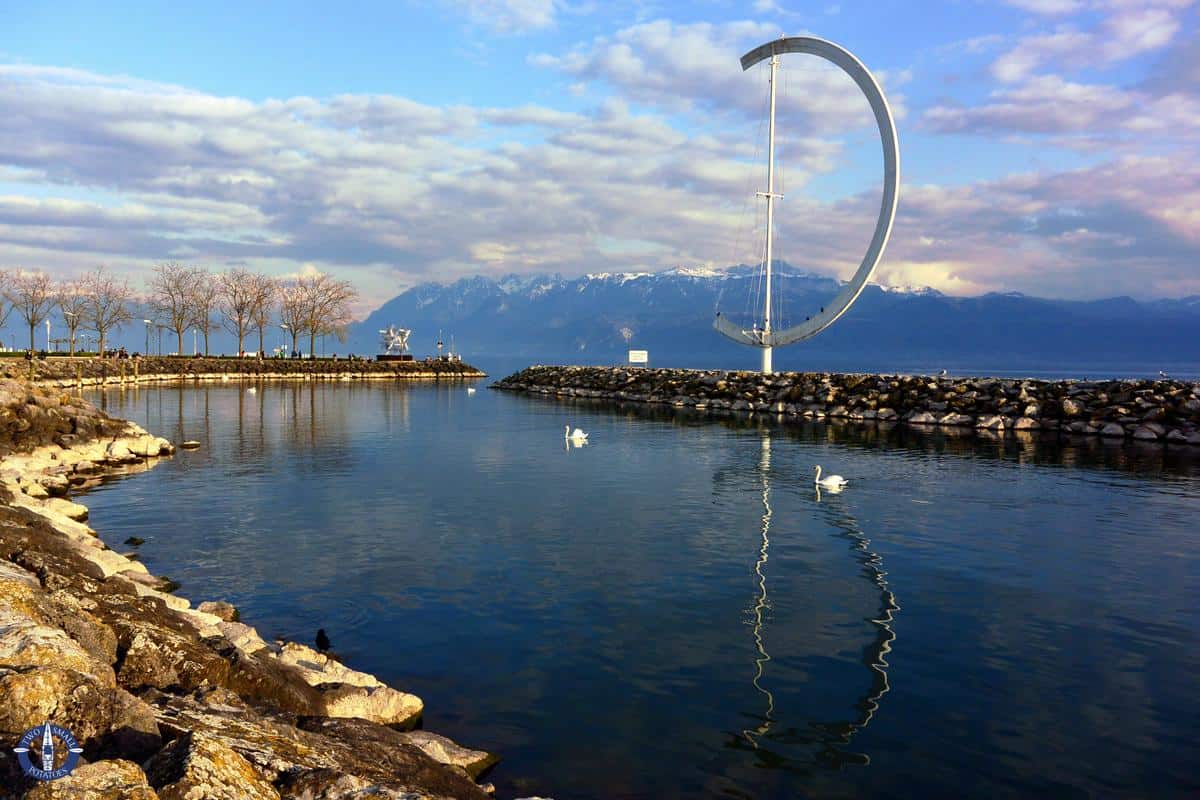 Switzerland
April 19, 2015 0
*This post may contain affiliate links. If you purchase through these links, we may receive a small commission at no extra cost to you. We only recommend companies we trust! 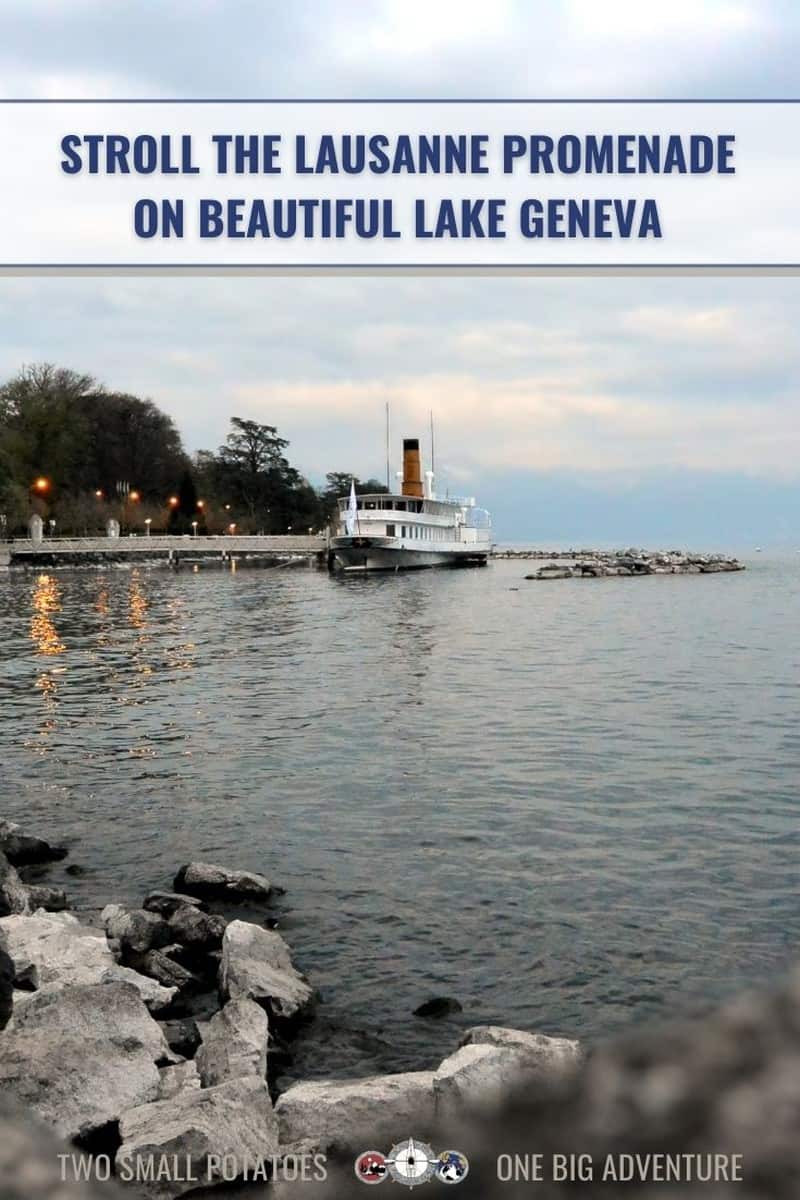 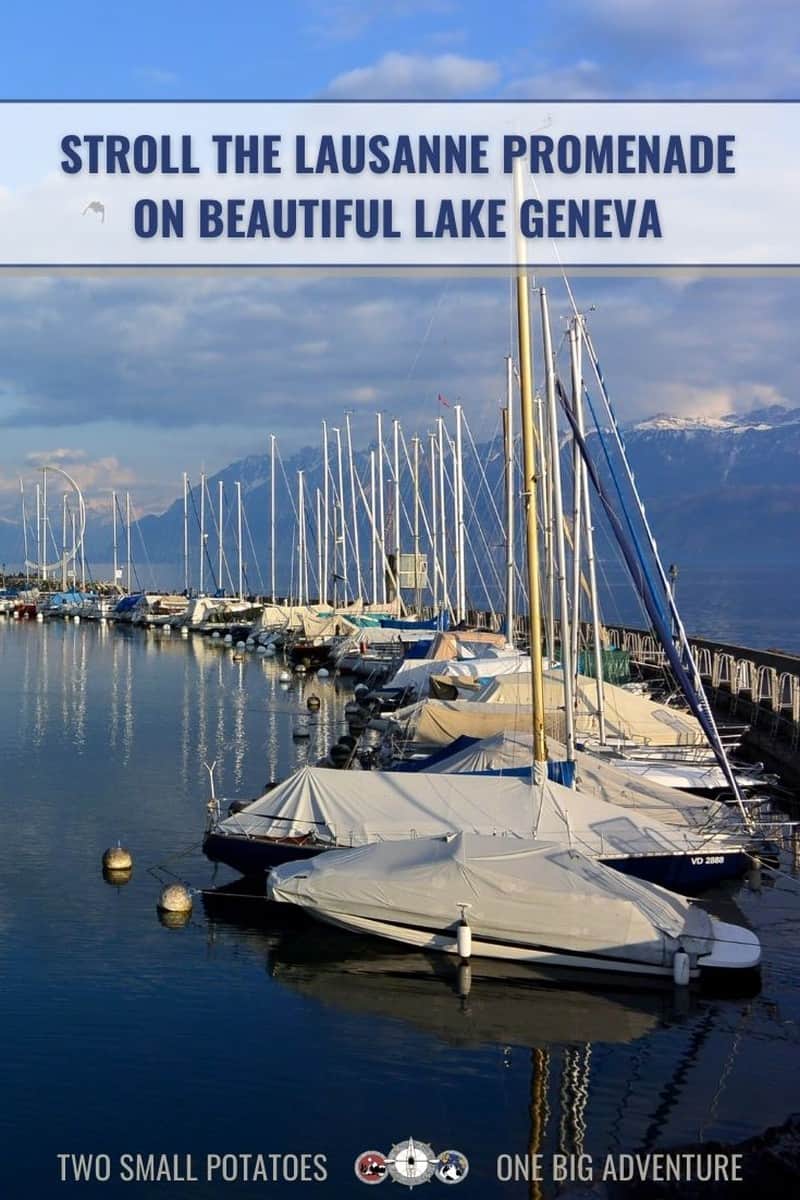 I’ll always regret that we didn’t visit the city of Lausanne in Switzerland sooner. Sprawling along the northern shore of Lake Geneva, Lausanne is absolutely gorgeous! It’s nestled among the steeply terraced Lavaux vineyards with their low gray stone walls crisscrossing the hills. Across the sparkling clear lake, the jagged peaks of the French Alps cut a sharp outline against the sky. And no place are these views more stunning and accessible than the Lausanne promenade, a paved waterfront path that hugs the shoreline in the city’s posh Ouchy neighborhood.

A stroll along the path any time of day is definitely one of the Lausanne attractions you shouldn’t miss. So put on your favorite walking shoes and be ready to add these Lausanne promenade highlights to your Switzerland travel itinerary.

See highlights from the Lausanne promenade, from the Eole wind vane in the Port d'Ouchy harbor to the Simplon, a historic paddle wheel steamer offering boat tours on Lake Geneva. Click to Tweet

Lausanne falls within the French-speaking part of Switzerland’s Vaud canton, where Lake Geneva is more commonly referred to as Lac Léman. Covering 580 sq km (224 sq miles), the lake is the largest in central Europe.

Though the Lausanne population is only around 150,000 people, it’s still the 4th largest city in Switzerland. Along with the city of Geneva to the west, it’s one of only two towns of considerable size located on the lake. In fact, Lausanne to Geneva is just another 45 minutes or so down the lake, by either car or train.

Geneva also is worth a visit, but if you had to pick just one city to visit in Switzerland and you like smaller, friendly towns surrounded by beautiful nature, we say visit Lausanne!

Officially, the Lausanne promenade extends from the Place de la Navigation at Port d’Ouchy, the city’s old harbor, for just over one kilometer east to the Haldimand Tower. Sometimes it’s referred to as the Ouchy promenade.

We recommend that you extend the walk to explore even more of the waterfront.

Specifically, boat lovers and photographers will likely want to walk out to the end of the jetty at the Port d’Ouchy marina. From there you have the best views of Lausanne from out on the water, and it’s the perfect vantage for photos of the Eole wind vane.

The Ouchy neighborhood was originally a small fishing community separate from the city of Lausanne, but in the mid 1800s, it was absorbed into its larger neighbor.

Ever since, Port d’Ouchy has been an important harbor for boat traffic on Lake Geneva.

Now the marina is a fun place for boat-lovers to see some pretty swanky sailboats and yachts, along with plenty of swans and ducks.

The Eole wind vane is a popular landmark at Lake Geneva. The large sculpture was added to the Lausanne waterfront in 1995 by artist Clelia Bettua.

Measuring 20 meters in diameter, the art installation is huge, swinging to change direction with the wind.

The large metal “C” is located on a small rocky breakwater of its own, so you can’t access it directly. The closest you can get to it is either by water or from the jetty at the Port d’Ouchy marina.

We’ve been in Switzerland for nine months, yet I hadn’t realized how much I missed being near water until we walked out onto the jetty at Port d’Ouchy.

Living in the Willamette Valley in Oregon for the last seven years, we were only an hour from some of the best and least visited beaches in the US. We were just minutes from either the comfortably warm Willamette River or the unspoilt but icy cold McKenzie River.

To top it off, we were liberally surrounded by an endless supply of lakes and reservoirs in every direction, often without a single other visitor.

Just the smell of Lake Geneva while we were walking along the waterfront was rejuvenating, though I did feel a pang of regret that we didn’t have our kayaks so we could paddle over to France and say, “Bonjour!“

The Place de la Navigation is the starting point, or at least one end, of the “official” waterfront walk.

In the summer, the large water feature with fountains offers cool breezes, as does the lake right next to the square. Kids ride scooters and skateboards, diners enjoy a drink or lunch at any number of outdoor eateries, and it’s a hotspot for tourists.

The large square is the place to be along this entire stretch of waterfront. It buzzes with energy and activity.

We happened upon a large group of older gentlemen playing chess with giant game pieces and sat for awhile to watch.

Two gents wielded their heavy knee-high wooden knights and pawns with confidence. Despite the harsh tone of their banter and the scattering of comments from spectators in a mixture of languages, everyone was clearly having fun.

Meeting up with some friends of the two friends who were with us, Larisa and Romi, the six of us found a quiet waterfront eatery to enjoy a drink.

Trav tried his first Vietnamese beer, which he rather liked, before we continued our evening stroll along the marina.

Travel Tip: Ever wanted to try Vietnamese beer? Head to Hoi An-BBQ on the waterfront.

One of the prettiest buildings along the Lausanne promenade is the 12th-century Chateau d’Ouchy. You can see its red-roofed main tower from the jetty as well as from multiple points along the waterfront path.

Those inclined to book a night in a medieval castle are in luck. Since the late 1800s, the castle has been operating as a 4* hotel.

Now this one is a big tricksy to include because it’s not freely open to the general public. Still, it’s unique, obscure, and bizarre – three things we love uncovering when we travel – so it’s worth including here.

The Beau-Rivage Palace is a luxury 5* hotel in Lausanne along the waterfront. It opened its doors in 1861 and has been faithfully serving its wealthy clientele ever since.

Legendary fashion designer Coco Chanel was a regular guest at the hotel. As a German agent during WWII, she later fled to Switzerland to avoid prosecution and spent a decade dividing her time among a number of luxury establishments before returning to Paris. The Beau-Rivage was a particular favorite of hers.

While many people know about the hotel, they don’t necessarily know about one rather peculiar feature on site: it has a dog cemetery.

A graveyard for pampered pooches is not something one would expect to find at a luxury hotel in Switzerland. Yet for decades, the dogs of the hotel’s most elite guests were allowed to be buried on the property. Coco Chanel’s dog, who stayed with her when she lived at the hotel, is one of those dogs.

Though the tradition ended in 1975, the cemetery remains. It’s said to be located in a little patch of woods near the tennis courts on the hotel property.

Obviously we didn’t stay at the Beau-Rivage, where the Presidential Suite is rumored to run $5000 per night. If you book a room there, definitely let us know if you find the dog cemetery – or if you run across any furry, four-legged ghosts!

If you spend any amount of time around Lake Geneva, you’ll see a number of distinctive boats ferrying tourists and locals around the lake.

Many of these boats are historic Belle Epoque paddle wheel steamboats. Switzerland not only has the largest fleet of them in the world, but they operate on just six lakes in the country. The greatest concentration of them is on Lake Geneva.

The members of the steamboat fleet are the Simplon, Savoie, Montreux, Rhone, and La Suisse. The company also operates boats with a similar design, like the Vevey and Italia, but they’re diesel-electric.

You can book tickets for a Belle Epoque boat tour on the official CGN website, or you can just admire their beautiful boats from your stroll along the Lausanne waterfront. Look for them near the Carrousel d’Ouchy where they’re often moored along the Jetée d’Osches (Osche Pier).

While you’re admiring Switzerland’s unique tour boats at Jetée d’Osches , you’ll likely also see this statue at the end of the pier.

It’s called Ouverture au Monde, which means “openness to the world,” and was created by renowned Spanish artist Ángel Duarte. Born in 1930, the artist fled Spain as an adult during Franco’s dictatorship. He settled for many years in Paris, working as an artist, and died in 2007 in Sion, Switzerland.

A lover of mathematics, he created sculptures and fine art with precise geometric shapes.

Virgin of the Lake

As you curve around the shoreline east toward the Quai de Belgique section of the promenade, you’ll come across the Vierge du Lac.

The beloved Virgin of the Lake statue was sculpted by Swiss artist Vincent Kesserling.

Brilliantly appealing to the public for donations to fund his project, he was using the idea of GoFundMe long before it was a website.

In 1987, he ordered a block of white marble to be delivered to the Lausanne waterfront.

For the next two years, he carved the Virgin of the Lake on site in front of locals and curious spectators.

Now it stands on the waterfront for everyone to enjoy.

Leave time to just relax and soak in your surroundings.

Lake Geneva is a place that changes constantly, with the seasons, the time of day, and even sometimes by the minute. Enjoying it from the Lausanne promenade is not something that should be rushed.

If you can, leave time to sit and enjoy street food from one of the many vendors, or grab a table at a more upscale restaurant on the waterfront.

Talk to the locals; they’re friendly!

Just sit and soak it all in.

We left Lausanne with especially warm memories after one final encounter with a random family in the Place de la Navigation. Travis and I passed a couple with their two kids and just about the cutest puppy that has ever existed.

Stopping to ask about her – a Cavalier King Charles Spaniel – we ended up talking to the family for well over an hour. Since we had our dog Touille with us, we talked “dogs,” ran through Touille’s long list of tricks for the kids, and threw a mini tennis ball for the puppy, who chased it as all puppies do, pouncing with gangly legs and over-sized puppy paws.

After chatting about jobs, life in Switzerland, and random things, we parted ways.

Tell me again, why did it take so long for us to visit Lausanne??

We’d passed through any number of times on our way somewhere else but had never just come to explore city. It took just one day in Lausanne for it to become my favorite Swiss town. And even after we visited again later to see more of the sights, walking the Lausanne promenade at Ouchy remains a favorite for us.

We can’t promise you’ll love Lausanne like we do, but it is a lively city with friendly locals and scenery so perfect it looks like it came straight from a dream!

Know Before You Go
Take a minute to PIN it!
11 shares