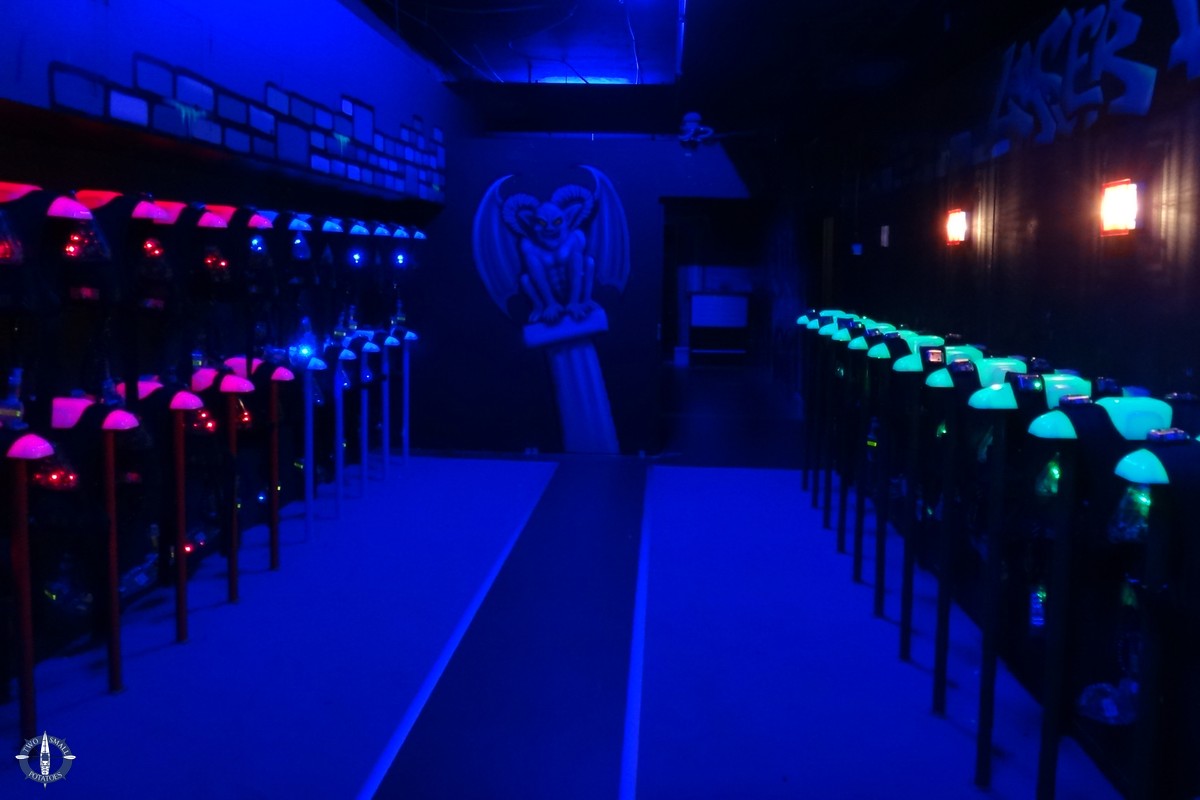 The BEST Place to Play Laser Tag in Fribourg, Switzerland

Switzerland
October 20, 2014 0
*This post may contain affiliate links. If you purchase through these links, we may receive a small commission at no extra cost to you. We only recommend companies we trust!

When you think of Switzerland, do you imagine cows placidly grazing in grassy meadows, birds singing, fields of alpine wildflowers, and curly-haired children toddling about? All set against a backdrop of snow-capped peaks? Yes? Am I right? So Switzerland has all of that, and more. Who knew we’d end up moving half way around the world to Europe, of all places, before playing our very first ever game of laser tag!

One of Trav’s labmates coordinated a group game night and invited us to join them.

On an overly warm October evening, nine of us gathered in front of the Laser District, a laser tag venue just upstairs from a bowling alley in downtown Fribourg.

We checked in at the front desk, handed over 24 francs per person for 2 games (30 minutes of play), then followed a staff member to a small theater room.

We first were required to watch a video in French with German sub-titles about the do’s and dont’s of laser tag. Though visually entertaining, the meaning of the video was lost on us, so our friends shared the highlights.

Rules of Engagement for Laser Tag

1. Keep both hands on the gun to make it fire.

I forgot this little nugget of information 1 minute into the game.

2. No running or crawling.

No running? People are shooting at me!

I know, “duh,” but I didn’t remember to aim until the second game. Let’s just say I didn’t end in first place.

We geared up and paired off into teams of three with at least one experienced player and newbie per team.

Then, nine warriors of doom were unleashed on the Laser District, the likes of which Fribourg had never before seen.

Within minutes, distant screams echoed through the black-lit maze of rusted out oil drums, netted ramps, and partial walls with strategic holes large enough only for the barrel of a laser gun.

Acrid mist from a smoke machine swirled around the wheels of a black hearse crouched in the center of the maze.

Strobe lights from a “mine” on the wall eerily pierced the smoke in shades of red, blue and green, creating a confusing array of false targets. The colors mimicked the same flashing lights on our vest plates, shoulders, and guns, all targets for our enemies.

After 30 minutes of thrilling, sweaty, heart-pounding fun, our time was up.

We all gathered around the score board to see our stats, laughingly demanding to know,

Who was Gollum? Who was Maasta?

Why’d you keep shooting me?!

I was happy to see that Zorg, my player name, had moved up the list from last to 4th place, likely owing to a teammate’s half-time reminder about rule #3 —> aim.

Maybe next time we play laser tag in Switzerland, I’ll actually remember the rules at the onset of the game.

More likely I’ll again run blindly into the mist, guns blazing, and have just as much fun!

Looking for more fun things to do in Switzerland?

Know Before You Go
1 shares