Konigstein Fortress: Come For the Views, Stay for the Concert

The hilltop ramparts of Königstein Fortress are so large and impregnable, it’s said that no enemy has ever dared attack.  Founded during the 13th century in what was then the Kingdom of Bohemia, the site sprawls across a 240-meter tall plateau in East Germany between Dresden and the Czech border.  A man-made wall built on the existing sandstone cliffs stretches for nearly two kilometers around the perimeter and its complex of about 50 buildings.  The fortress is monstrous – one of the biggest hilltop castle complexes in Europe.  It’ll take your breath away, from the jaw-dropping views of the Elbe River to the short but steep climb to the top.  If you happen to be traveling anywhere near Dresden, it’d be a shame not to stop and spend a few hours exploring Festung Königstein.

Embrace your inner princess with a visit to Koenigstein Fortress, home to one of Germany's most picturesque fairy tale towers. Click to Tweet

Walking the trail around the fortress offers stunning views of patchy green forests and fields far below, red-roofed villages, and the Elbe River as it winds around the Lilienstein, an adjacent plateau that once harbored a castle of its own.

Throughout its history, Königstein Fortress has served as a military fortress and prison, a refuge for the royal family, and neutral ground in times of conflict.

For a time, the castle complex was even home to the region’s biggest wine cask with a storage capacity of 238,000 liters.  It still has the second deepest well in Europe, sunk to a depth of 152.5 meters.  While this might not be impressive with today’s technology, the shaft for the original well was dug in 1563!

152 meters is just a hair shy of 500 feet. Even us ametric folks can tell: That's deep! ~Dr. Travis Click to Tweet

The fortress’s most picturesque feature is undoubtedly the Hungerturm-Rößchen.  This fairy tale tower is strangely absent from the official site’s maps, both online and at the fortress.  It was our favorite feature of the entire fortress.  If you don’t want to walk around the entire fortress walls but want to see the tower, head left after entering the main entrance.  If you walk clockwise around the perimeter, you’ll quickly come to the tower where it juts out from the northern edge of the fortress walls. 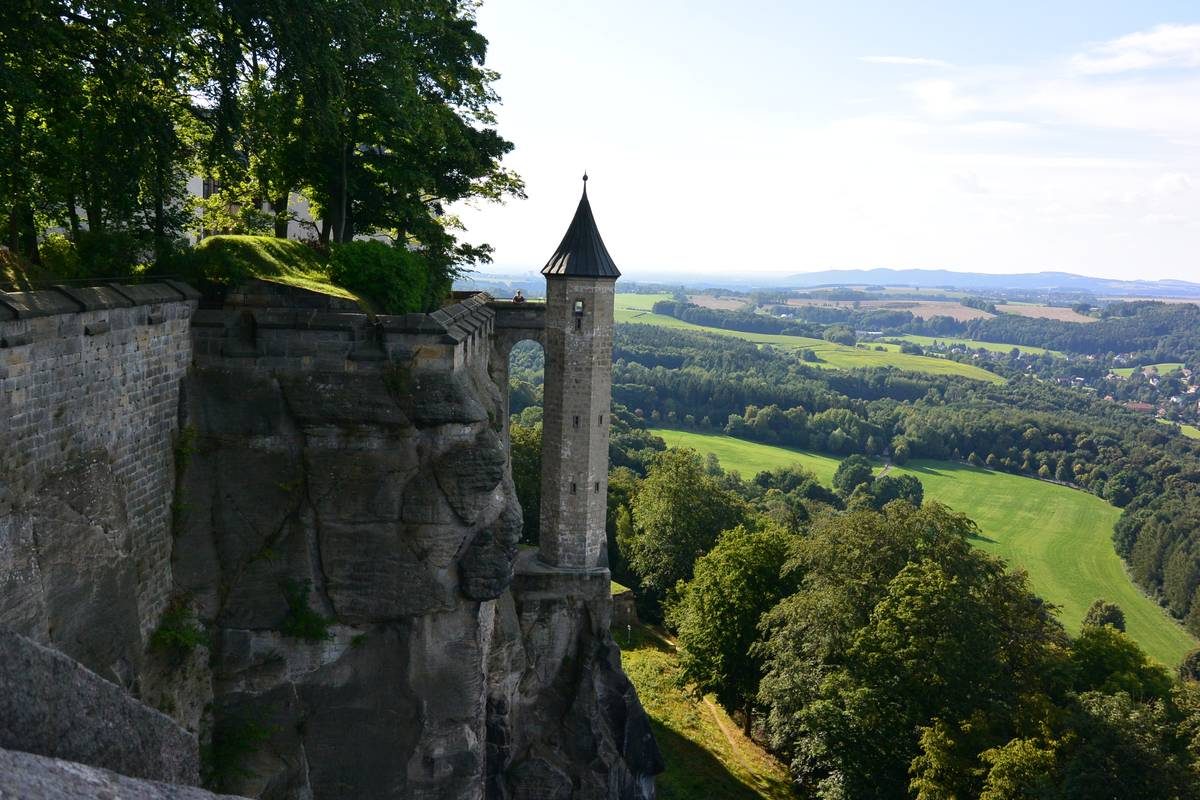 Since its founding 800 years ago, Königstein Fortress has clearly burgeoned from its humble beginnings into one of the most impressive fortresses in Europe.  Yet despite being one of the more visited tourist attractions in eastern Germany, many people aren’t aware that it even doubles as a concert venue – and a pretty incredible one at that!

We had tickets to see Chris de Burgh, a British/Irish singer best known for his 1986 hit song, The Lady in Red.  Though I much prefer his ballads about World War II, it was obvious that many of the female audience members came prepared.  It wasn’t long before we realized we were surrounded by a sea of red dresses in the rather small audience.  A cluster of them surrounded us in the first few rows of seats.

Apparently Chris de Burgh’s die-hard fans knew that he’d eventually make his way through the crowd, singling out red-clad ladies for a hug.  Not my thing at all, but it was sweet that he made the night for a lotta ladies.  Overall, he put on a good show.  It was a bit unreal to see him in concert after listening to his music for so long.  Plus, we saw him in concert at a fortress, for cryin’ out loud.

Haven’t yet booked your accommodations?

If you like rustic sleeps like we do, we highly recommend staying at Ferdinands Homestay, a hostel and campground near the fortress.  The owners are some of the friendliest folks you’ll ever meet, and you can camp right on the Elbe River.

Know Before You Go
65 shares