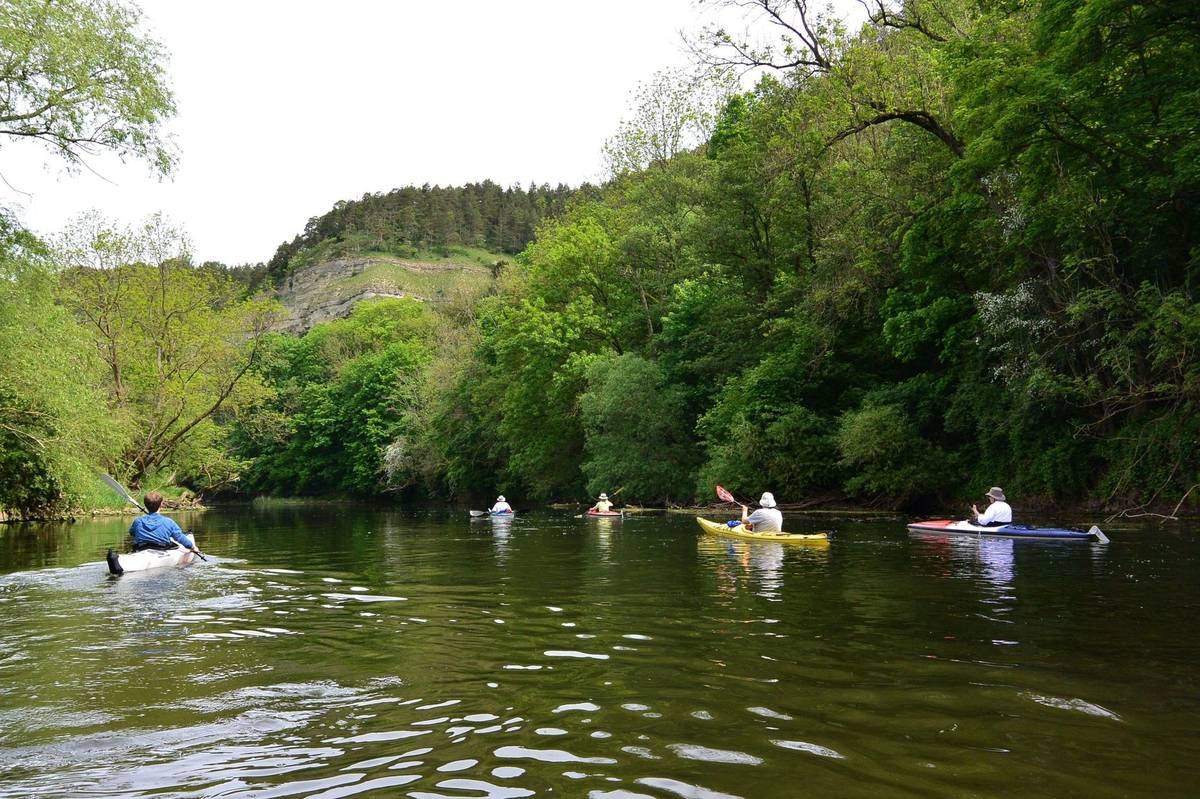 Germany
May 22, 2016 2
*This site contains affiliate links. If you purchase through these links, we may receive a small commission at no extra cost to you.

Several weeks ago, Travis and I drove over to Kiessee, a small lake in Göttingen, to meet some folks from the Göttinger Paddler-Club. Hanging out on the club’s deck at the lake for well over an hour, we chatted with Robert, one of the organizers, and several of the club members over beer. The club’s water polo team had just finished practice when we arrived, so we chatted with them as well.  Robert gave us a tour of the boathouse, and we were delighted to see a handful of kayaks we’ve never seen before. At the end of the evening, we eagerly accepted the group’s invitation to join them on their next trip kayaking the Werra River in eastern Germany.

At 9 am the following Sunday, we met the group in the parking area of their boathouse, chatted while they finished lashing down their kayaks, then hopped in to ride with Annekatrin.

About an hour and a half later, we arrived at a campground in the village of Treffurt, which would be our take-out point. Dropping off one of the cars, we all continued on to the charming hamlet of Creuzburg (not to be confused with Kreuzberg). Pulling off the main road onto a narrow gravel and dirt track, we parked in a grassy area next to a perfect put-in.

Without our knowledgeable club members, we never would have found the place.

The plan was to spend the next 4 or 5 hours paddling a 28-kilometer section of the Werra to our take-out point in Treffur, where we’d left one of the vehicles. Accustomed to nearly always wearing PFDs (Personal Flotation Devices, or “life jackets”) when we paddle, I was at first surprised to note that none of the group planned to wear them.

Thinking about how much a part of our American culture it is to wear life jackets – from the time I was a kid riding in my grandpa’s boat on the Coeur d’Alene Lake to taking a lifeguard and water rescue course – PFD use has always been heavily encouraged.

But then I realized that they made their decision based on their paddling experience and knowledge of the river, opting not to use PFDs the same as we would on the St. Maries River in Idaho or Fenton Lake in New Mexico. We opted to leave our PFDs in the car. Had we kayaked the Werra River – an unfamiliar river, knowing absolutely nothing about it – without the group, we would have worn them.

Incidentally, shortly after our trip, a swimmer drowned in the Willamette, our local river in Oregon. For anyone reading this, wear a PFD!

As we crossed into the Werra’s river basin on the drive to Creuzburg, Annekatrin pointed to the other side of the river. Indicating we’d reached the former border between East and West Germany, she explained that the river itself was divided down the center along that particular stretch with checkpoints established along its banks.

Later while paddling, the group pointed out landmarks and talked about what it was like visiting East Germany after the fall of the Berlin Wall. For West Germans, our day trip kayaking the Werra River would not even have been possible in the not-so-distant past.

The kilometers slipped past peacefully as we paddled to the sound of the gentle dip of our paddles and the frequent thwump, thwump, thwump of swans attempting flight upon our approach. They literally ran along the water’s calm surface before lifting clumsily in flight.

It quickly became apparent that the river is a birder’s paradise. Herons perched along its banks, hawks circled overhead, and mama geese watchfully shepherded their herds of fuzzy goslings.

As the river wound its way through a handful of small villages, we passed the occasional naturcampingplatz – “nature campground” – and a handful of charming homes along the river banks. 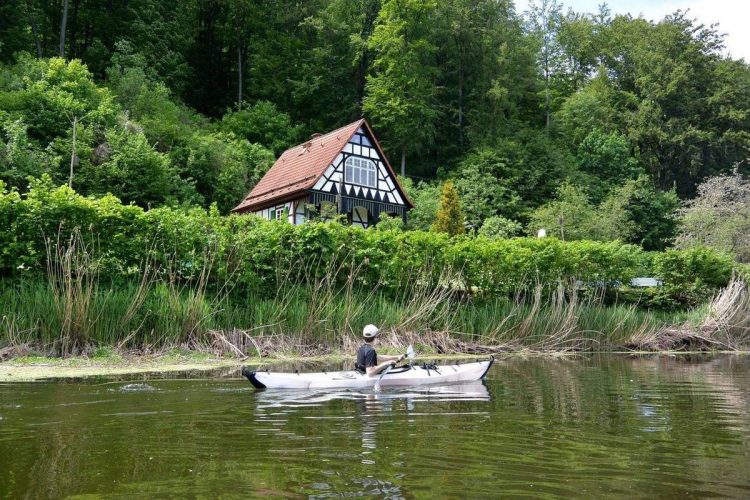 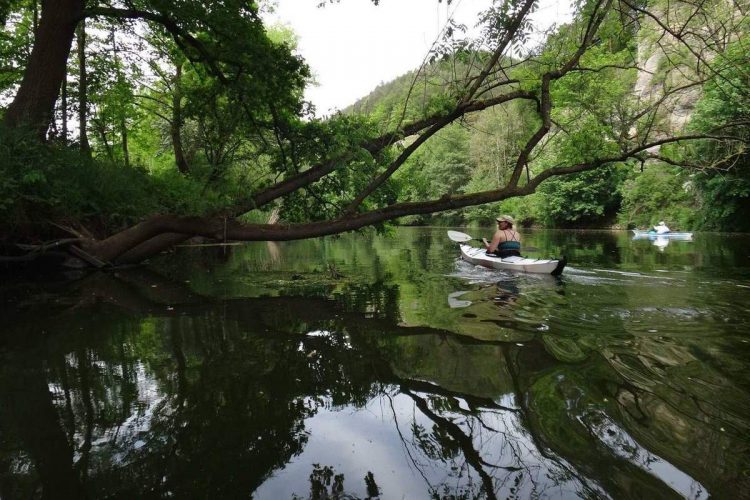 As is typical of rivers in Germany, even small ones, we encountered two dams on the Werra. Both times, Robert warned us in advance, pointing out their distinctive blue and white warning sign:

Arriving at our destination in Treffurt in the late afternoon, we trudged ashore and stretched our tired muscles. Kicking back in a patch of cool grass, we chatted with Robert while the others piled into the car they’d left at the campground and drove to Creuzburg to pick up the other cars. Like a well-oiled machine, the group had the trip planned down to the smallest detail.

Annnnd they ended the trip in the most perfect fashion. When they arrived with the other cars and finished loading our gear, they drove into Treffurt and parked, leading us along the twisted, cobbled streets of town in search of ice cream.

Settling at a shaded table in a small square in Treffurt, we perused the menu before promptly choosing iced coffees. The name is a bit deceptive, since iced coffees in Germany (and Switzerland as well) aren’t like American iced coffees at all. In the US, iced coffee is simply any kind of coffee beverage – latte, mocha, etc – with ice in it.  But here, an iced coffee is coffee poured over ice cream. It’s quite a surprise when you’re not expecting it, but you really can’t go wrong with that combo!

Apparently I was so excited when our order arrived that I didn’t pause long enough to snap a single photo of our iced coffees, which arrived with mounds of sweet whipped cream in twin old-fashioned glasses. Oh, they were good!  It was the perfect end to a perfect day – paddling on a beautiful river with nice folks, good conversation, and ice cream as the cherry on top.