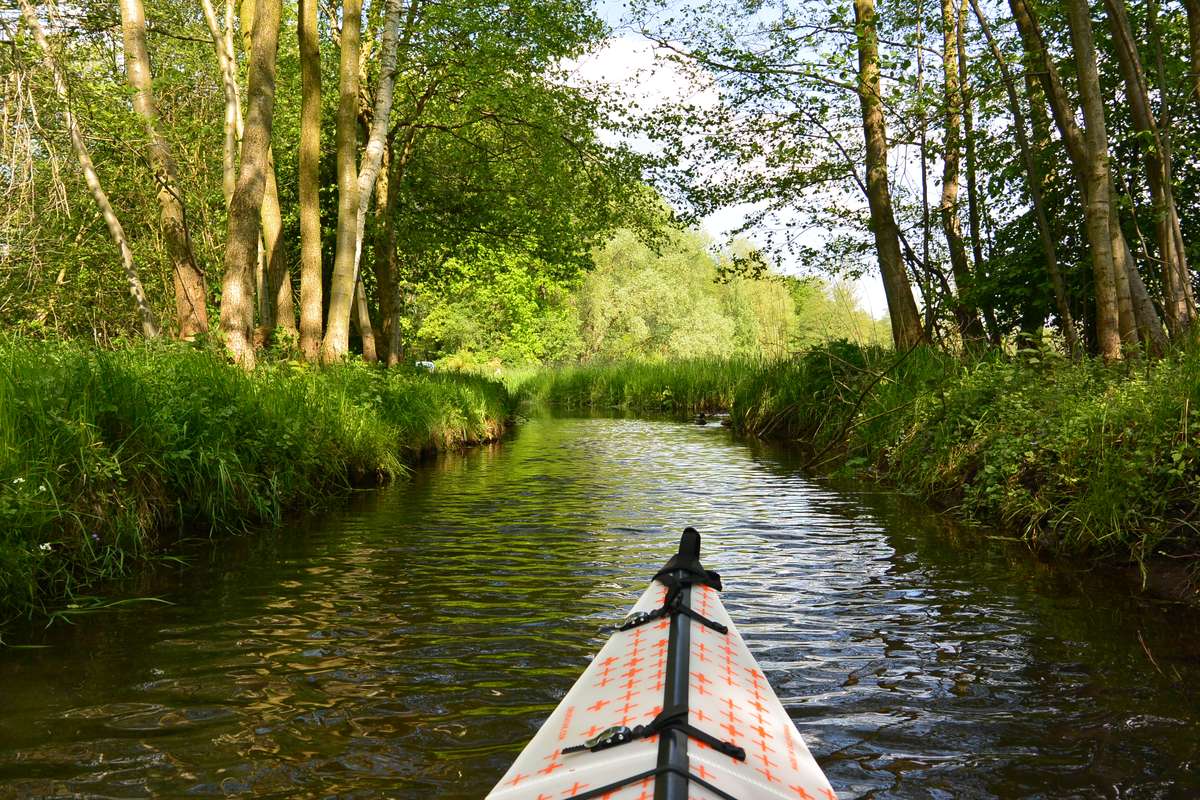 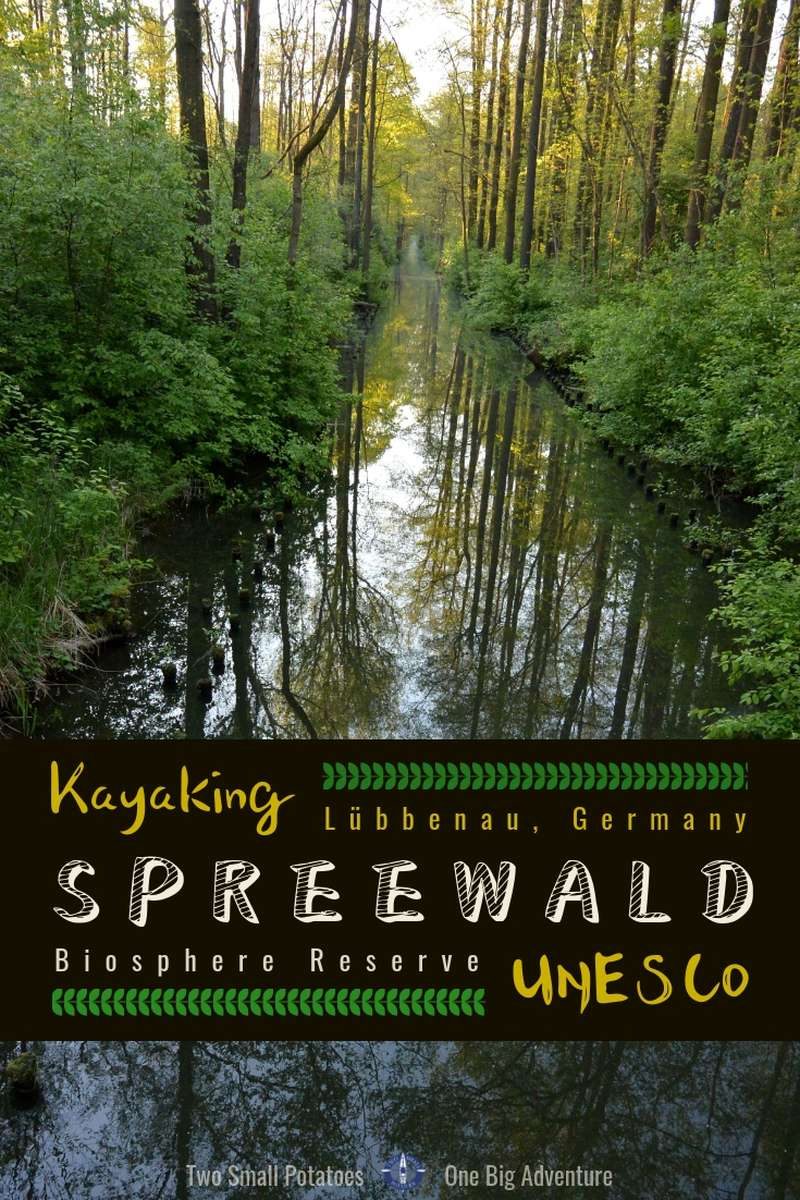 Travis and I spent the entire winter looking forward to our first kayaking trip in Germany. Every weekend in April brought rainy weather that cancelled our plans before the sun finally appeared in full force in May. Dusting off our paddling gear and hefting our Oru kayaks out of their storage boxes, we loaded up the VW for a weekend of adventure in the Spreewald Biosphere Reserve, a nature reserve located about 100 km east of Berlin. Formed during the last Ice Age, the region now offers over 1500 km of canals and streams that wind through thickly wooded lush forests. The biosphere reserve is protected as a UNESCO site and is home to thousands of species of plants and animals, some only found in this forest. For two nature lovers, it sounded like the perfect place for us to experience kayaking in Germany for the first time.

Since we’re completely new to paddling in Germany, I contacted the official Spreewald Tourism Office before our trip for information about paddling routes and options for camping. They kindly responded immediately, forwarding a map with camping sites marked, and assured me our dog was welcome in the reserve. With food for the weekend, printed paper map in hand, and a rough 2-day paddling route pinned on Maps.Me, our 3.5-hour drive from Göttingen flew by.

One of the best hidden gems for outdoor lovers in Germany is the Spreewald Biosphere Reserve. Come and visit to see why it's so special. Click to Tweet

The town of Lübbenau is the official gateway to the Spreewald Biosphere Reserve. It’s immediately obvious how it’s earned its designation as “the city of punts and pickles.” With the small town built around Spreewald’s canals, locals navigate the waterways in punts – traditional flat-bottomed boats maneuvered by a long pole. The “pickles” though, we never did see.

The region is also famous for its pickles, and lovers of unusual attractions might want to pay a visit to the town’s pickle museum.

Since we were planning to camp overnight somewhere in the reserve, we parked our car at Spreewald-Natur-Camping, a thriving city campground packed with RVs and absolutely hopping with kids. For 5 euros per day, the campground host allows visitors to park their car at the campground while they’re paddling. It’s perfect because the campground offers an ideal spot to unload boats and gear and launch from their small dock.

If you want to camp during your visit to Spreewald, read on to make sure you avoid making the same mistakes we did!

As soon as we launched our kayaks and started paddling, we were officially in heaven!

Though you’ll likely pass quite a few paddlers in the canal near the campground, the woods and waterways will likely be mostly deserted after paddling for just a few minutes.

Paddling through the little hamlet of Lübbenau, you’ll pass the most picturesque old houses that line the canals. Set back from the water, some are surrounded by immaculate lawns, manicured shrubs, and expansive gardens. Most meld into the forest landscape, peering through the trees with their beards of creeping vines. Having earned a rest, retired punts rest on the banks of the shore.

It’s important to note that the canals are littered with small dams.

When we reached the first dam, though, we were immediately impressed with their neat little system. We were easily able to bypass the dam by pulling our kayaks up and over a wooden ramp with rows of metal rollers.

Long before the sun set, we were on the lookout for a place to pitch our tent for the night.

The website for the biosphere reserve states it offers “15 legal rest areas (bivouac sites) for paddlers.” The gal from Spreewald’s tourism office said we should look for a Wasserwanderrastplätze, which literally translates to “water-hiking rest area.” Unfortunately, I misunderstood her email to mean that at least some of these camping sites, or bivouacs, are located inside the reserve. The map only shows a few of the 15 camping sites, all of which are pins generally dropped on the map with no specific info provided. As we now know, all of these are designated campgrounds in inhabited areas; camping in the reserve is strictly prohibited.

By the time we started to realize perhaps we’d made a grave error, it was too late to turn back. We were several hours of paddling from the campground where we’d left our car, and further still from any of the others on the map. Hemmed in by dense underbrush on both sides of the canals, we were left with few options. Finally rounding a bend along the outer perimeter of the Spreewald, we found a place under a bridge to pull our boats out of the water.

Scouting out the surroundings with his headlamp, Travis called for me to follow him. Lugging our boats and gear, we trudged through the dark away from the canals to a small patch of woods next to a farmer’s field. Carefully stepping through nettles in sandals in the dying light of my headlamp, we managed to break down our boats and set up the tent without landing in a patch of fiery missiles. Though the evening hardly turned out as we’d imagined, we happily fell asleep to towering trees overhead and the lively sounds of the night forest.

Up with the sunrise the next morning, we hiked back to Spreewald and were paddling again by 7 am.

A consummate night owl, I loathe getting up early, but it’s worth it to be on the water when the light bathes everything in gold.

Following the well marked “road” signs in the canals, we rounded a corner and entered the watery parking lot for Wotschofska. We were hoping to relax for a bit over a cup of coffee, but the restaurant was closed.

A morning without coffee is rough indeed.

Near Wotschofska, I spotted a bright orange and yellow fungus on a decaying tree stump. Not knowing what it was at the time, I now believe it might be Laetiporus sulphureus, a type of edible fungus that’s also called “Chicken of the Woods” because some folks think it tastes like chicken.

Has anyone seen this before?

Or better yet – have you tried it?

We would never harvest anything from a protected area, but it’d be fun to hunt for this in Germany where it’s allowed and give it a taste. Travis doesn’t like mushrooms, but even he might like these if they really taste like chicken!

Leaving Wotschofska without coffee or chicken-flavored mushrooms, we entered the Hochwald, or “High Forest” in the Spreewald.

Arriving at another dam, we pulled our boats out to have breakfast and let Touille run around in the grass.

While we were relaxing in the sun, an older gentleman arrived by bicycle, presumably from a house nearby, and kicked back on the dam with a newspaper. He had arrived for his shift, manning the locks to allow boaters through. I don’t know if he’s paid or volunteers, but it’s definitely an unusual job position.

With some of her energy worked off, Touille settled back to watch the sights roll past. Unafraid of the water, she still much prefers to run on shore – typical of a terrier, she’d rather be sniffing every inch of land than cooped up in our boats.

Cruising along a particularly quiet and peaceful stretch of water, the wind started to kick up as we turned south. When an occasional bloop sounded near our boats, I thought squirrels or birds were dropping nuts or twigs on us.   When a small branch hit my boat, I realized the wind was dislodging them from the trees.

As the wind continued to knock the swaying trees together high above, we heard a louder creaking somewhere overhead. Though it’s a common sound in the woods, Travis still started to paddle faster, angling to the opposite bank of the river. Following him absentmindedly, we were both just a short distance downriver when a thunderous crack sounded behind us. I actually jumped in my boat.

We whipped around just in time to see a massive widow maker nearly the length of the river come crashing down from the treetops, shattering as it hit the water.

Had it hit one of us, it would’ve been a really crappy way to go, but it was definitely an awesome sight to see.

Stopping again at another dam, we munched on lunch and threw the ball for Touille in a small grassy field.

Touille immediately had a small audience of kids, several of whom eagerly chatted with us in English while their parents watched from a distance. After showing them Touille’s tricks and a few basic commands, we happily passed off the task of throwing the ball for her to them. Bless their little hearts, the angels entertained her – and us – for well over an hour before their family finally packed up their picnic spot and paddled off down the canal.

Nearing the little canal town of Lehde, we paddled through a thick scrum of pollen on the surface of the water. It glistened pink in some sections, white in others. Despite my miserable allergies, I couldn’t help but admire the fertility of the forest.

Signs of human life again began to mark the landscape as we paddled into the tiny, incredibly adorable village of Lehde.

Navigating through increasingly narrow channels with room for only two lanes of traffic, we passed a steady stream of kayakers and large punts filled with beaming tourists. We crossed under a steady stream of wooden walkways built over the canals to connect the hamlet’s private homes, restaurants, and guesthouses.

Paddling back to our car in Lübbenau, I was reluctant to leave the reserve despite being hot, dirty, and tired. Germany is full of peaceful, beautiful places, but I didn’t want our first paddling trip to end.

We’ve kayaked in all kinds of waterways from desert landscapes to the tropics, but this experience was entirely unique for us. When our drive home stretched into a 5-hour nightmare with bumper-to-bumper holiday traffic, I could still hear the birds chirping and the gentle rush of water. Only 100 kilometers from the grit and bustle of Berlin, life in the Spreewald Biosphere Reserve drifts by at the pace of an Ice Age canal.