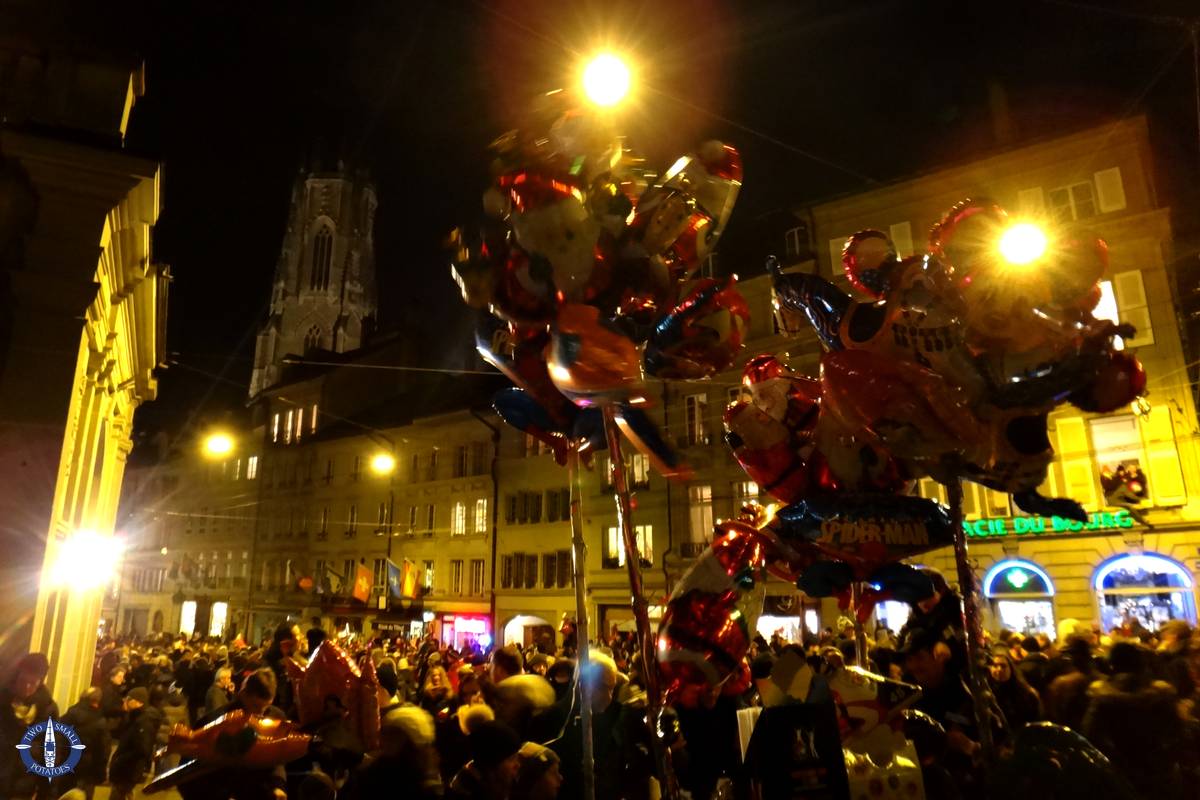 In the US, December 6th marks a day much like any other in the weeks leading up to Christmas. Stores are packed with shoppers. Lighting ceremonies and festive markets herald the arrival of the holiday season. The roads are congested with cars hauling tightly coiled pine, fir, and spruce trees ready to be un-sprung and decorated as aromatic masterpieces once they find their new homes in living rooms across the country. Half way around the world, December 6th is Saint Nicholas Day in Switzerland.

The day is an official holiday, a bit like a second Christmas. Bonus, right?

Before moving to Europe, we’d never heard about this particular holiday. Thanks to new friends, we got a crash course in local traditions and had a really fun time doing it.

Who was Saint Nicholas?

In Switzerland and other German-speaking countries, Father Christmas is known as Samichlaus. He’s not the same as Saint Nicholas, the man honored on December 6th.

Also referred to as Sankt Nikolaus or Nikolas, Saint Nicholas was a Greek who lived during the 3rd and 4th centuries in present-day Turkey.

The bishop of a small town called Myra, he staunchly defended Christian doctrine during a time when priests there faced persecution and execution for their beliefs. He even spent time in a Roman prison for his convictions.

In the centuries following his death, two stories about Saint Nicholas rose to prominence. Both were based on miracles many thought he performed.

The first story credited the benevolent bishop with anonymously giving gold to three unmarried daughters. The money was dowry so that they might avoid a life of prostitution. Some say he tossed the gold through an open window where it landed in a stocking, the very first “stocking stuffer.”

In the second tale, St. Nicholas bestowed a miracle upon several murdered children by restoring them to life and bringing justice for the crime.

These stories created the foundation for the legend of a generous and kind Saint Nicholas who would return each year to deliver gifts to kids. Now known as the patron saint of children, December 6th is the date of remembrance that officially marks his death around the year 343.

How do locals celebrate Saint Nicholas Day in Switzerland?

The real-life Saint Nicholas had a reputation for giving gifts in secret, often leaving them in the boots of children.

It’s still customary for children to put a pair of shoes outside their front door on the eve of December 5th. Much like Santa Claus delivering gifts under the tree and in stockings, Saint Nicholas leaves coins and small trinkets for good children on December 5th. They’ll wake in the morning, rush to the front door, and find out what St Nicholas brought them.

Every year on December 6th, the Swiss town where we live, Fribourg, hosts a parade in honor of their patron saint, Saint Nicholas.

Vendors sell balloons, churros, and best of all, vin chaud (or Glüewein in German) – a hot and spicy mulled wine, perfect for warming the hands and belly on a frigid December evening.

Festivities such as this are repeated all around the country, as well as in neighboring countries.

Since we had never celebrated Saint Nicholas Day in Switzerland, we were pretty excited!

Some friends invited us to partake in the festivities, so we met up in town before the parade and beelined for the first hot mulled wine stand we saw.

Not only is vin chaud delicious – likened to our mulled apple cider back home – but we bought ours from a Boy Scouts’ stand. They give away the wine for free, only asking for a small donation for the glass itself. The recyclable cups can be returned once empty for a refund, or better yet, a refill.

Sipping our drinks, we milled with throngs of folks along the narrow cobblestone street that runs through Fribourg’s Old Town.

This was the designated route that St. Nicholas would follow with his entourage on the way to the cathedral. There, he’d give his Yuletide speech.

Above us, bystanders hung from upper floor windows or sat on window ledges for a view of the parade.

After waiting for over an hour and nearly freezing our tootsies off, the parade finally began.

The parade was so short, it didn’t take long before ol’ Saint Nicholas himself finally made an appearance.

Perched atop a small donkey and dressed in bishop’s attire, he was accompanied by candle bearers, a small band, and Zwarte Piet – Black Pete, the saint’s traditional but increasingly controversial companion.

The entire procession passed in such a flash, we ended up with a single blurry photo of Saint Nicholas.

I’m sure the hour of bottomless mulled wine didn’t have anything to do with it.

Noooo, not at all.

This was our first encounter with Zwarte Piet, with his blackened face, dark cape, and wooden switch to scare children.

Historically, legends and depictions of Zwarte Piet have at times intermingled with those of Krampus, a terrifying pre-Christian pagan beast who was the son of Hel, the female ruler of the realm of the dead in Norse mythology.

Though the exact origins of Zwarte Piet are unclear, legends abound which show him as an evil, dark-skinned man with Moorish origins. He was possibly enslaved by – or a servant to – Saint Nicholas.

More contemporary explanations of his appearance have been modernized to defuse criticism that the character perpetuates racism. One explanation is that his face is darkened from soot because he climbs down chimneys.

As two Americans in a country and culture that aren’t are own, we were pretty uncomfortable with his character. Zwarte Piet clearly seems racist to us, but we’re guests here. We’re here to observe, learn, and grow. We really try not to judge.

Dutch colonists who arrived in the Americas in the 1600s first introduced us to their Sinterklaas, the Dutch name for Saint Nicholas.

Over the next several centuries, his character and appearance underwent a radical change as he evolved into the jolly character Americans call Santa Claus. In particular, if it weren’t for the Protestant Reformation and 19th century artists like Thomas Nast and Washington Irving, Americans might very well celebrate Santa’s arrival on December 6th instead of on December 24th.

Instead of hanging stockings above the fireplace on Christmas Eve and opening gifts on the 25th, children across the US would leave out their shoes on December 5th, anxiously awaiting the arrival of Saint Nicholas and the goodies he’d deposit there.

Looking for more articles about expat life in Switzerland?