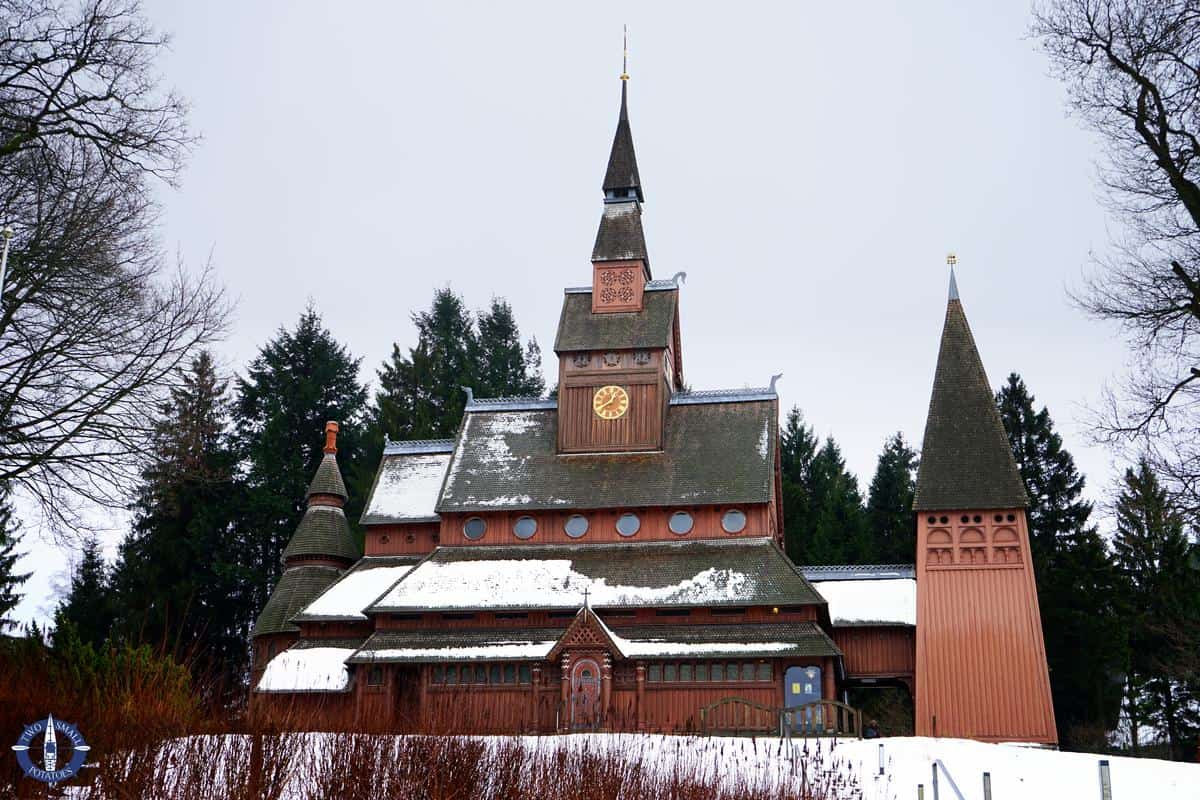 How to See A Stunning Norwegian Stave Church in Germany 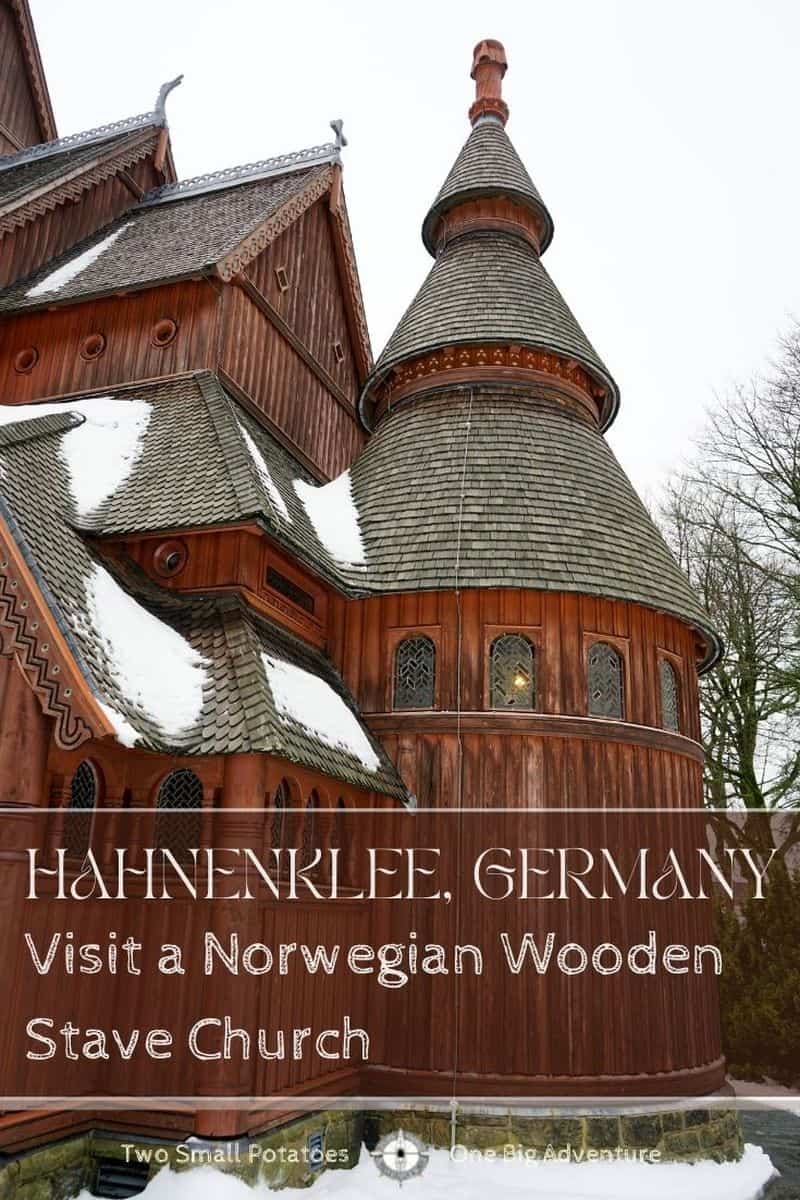 If you love Germany and are always on the hunt for new and unique places to explore, we have an attraction for you to add to your list: the Gustav Adolf Stave Church. It’s relatively unknown to tourists and even flies under the radar for many Germans.

Now clearly Europe has a lot of churches, but this isn’t just any ordinary church. It’s a stunning Norwegian stave church. Wooden churches like this are incredibly rare outside Scandinavia, so the Gustav Adolf Stabkirche offers a unique opportunity to see a church like this in southern climes.

Here we’ll share helpful things to know about visiting the church, from its exact location and where to park, to a bit about its history and why there’s one solitary stave church in Germany.

Norway may be the capital of wooden stave churches, but you can actually visit a German stave church in Hahnenklee. It's a beaut! Click to Tweet

Language Tip: The church is often referred to either as the Gustav Adolf Stabkirche or Stabkirche Hahnenklee. In German, kirche means church.

Where is the Gustav Adolf Stave Church?

Germany’s stave church is located in the village of Hahnenklee near Goslar, Lower Saxony. It’s just outside the western edge of Harz National Park in the middle of the country.

The church is definitely worth a short detour if you’re visiting the Harz Mountains.

We were spending a long weekend at Hotel Bergblick in Hahnenklee Bockswiese nearby. Our plan was to spend the weekend skiing and snowshoeing some of the nearby hiking trails.

Instead, gloomy rain ruined our plans, so we ended up taking a little drive to Hahnenklee. When we saw the church up on the hill, we had to stop and explore.

We’re so glad we did!

Travel Tip: Hahnenklee weather can be a bit unpredictable, especially in winter. The Harz stave church is a great option for an indoor attraction.

What is a stave church?

A stave church is a type of medieval wooden church that originated in northern Europe. The Vikings, famous for their ship-building prowess, transferred their skills with wood to the construction of these churches during the Middle Ages.

The goal in developing this style of architecture was to build sturdier churches that lasted longer.

Borrowing from Roman construction, they began using stone slabs as a foundation rather than sinking wooden posts directly into the ground. On that foundation, they raised sturdy wooden posts at the corners to support a horizontal wooden framework, which was then filled in with vertical planks and wedges.

As Americans, the vertical wood construction stands out because it’s so different from our classic log cabins in which whole round logs are stacked horizontally.

Why are they called “stave” churches?

The name comes from the particular type of wood used in their construction. A stave, or stav as it’s called in Norwegian, specifically refers to the type of wooden logs used for the load-bearing posts.

Historically, staves were made of ore-pine – a type of old growth pine tree high in resin. While still alive, the trees were stripped of their branches and then left to naturally “cure” where they stood. Over time, the resin in the trees was drawn up throughout the trunk, creating a log that was naturally resistant to decay.

The trees were then harvested for building projects.

What are some characteristics of stave churches?

Even if you haven’t been to Norway or seen a stave church in person, you’ve possibly seen a photo of one at some point.

The architecture is quite distinctive, with multi-tiered levels decreasing in size, topped with triangular frames or turrets. The doorways, rooflines, and eves feature ornate Viking motifs – often animal carvings – etched in the wood. The rooftops resemble upside down Viking ships.

In traditional stave churches, the entire construction was completed without the use of nails, metal, or adhesives.

One final unique and interesting feature of medieval stave churches is that the exterior walls are often black. The color comes from how the logs were treated. During construction, the ends of the staves were burned and the planks coated with tar to further protect the wood from decay.

The Gustav Adolf Stave Church in Germany has many of the classic features of a Norwegian stave church, but it’s not black.

Is the Gustav Adolf Stave Church interior worth seeing?

In fact, the interior is even more spectacular than the exterior. Or at least we think so.

It’s an absolute work of art, a mastery in craftsmanship. Nearly every surface is carved with pagan or Christian animals or painted with intricate Viking patterns in shades of vibrant gold, red, and blue.

The entire ceiling is one giant piece of art.

Why is there a Norwegian stave church in Germany?

That’s a good question. We were definitely wondering that!

The Gustav Adolf Stabkirche was built by Karl Mohrmann (1857-1927), a German architect, master builder, and professor of medieval architecture in Hannover.

From his visits to Norway, Mohrmann became enamored of the stave churches he saw there. Some say he was convinced that stave churches once existed in Germany also and sought to help revive them in his own country.

It seems unlikely that a professor of medieval architecture wouldn’t know that this simply wasn’t true. No trace of medieval stave churches in Germany has ever been found.

It’s more likely that he simply admired the architecture and wanted to bring that to the community in Hahnenklee, which was in need of a new parish church.

Drawing heavily from the Borgund Stave Church in Norway for inspiration, he built the stave church in Hahnenklee in its image, with deviations.

The Hahnenklee kirche in Germany is much larger than Norwegian stave churches.

It has more windows to allow in light, including round windows more akin to a modern ship’s portholes than medieval Scandinavian architecture.

Some of the interior motifs also reflect much newer styles of art that only an art expert or historian would likely recognize as “inauthentic.”

Whatever his motivation for building the stave church in Hahnenklee, it was a wise choice.

It not only continues to serve local parishioners, but it’s a popular venue for weddings and a unique tourist attraction that brings visitors to the area.

Where can you see other stave churches today?

The construction of new stave churches was prolific across Scandivavia for hundreds of years, particularly from 1050 to 1350.

Most were built in Norway, where it’s believed that between 1000 and as many as 2000 stave churches once existed. Then construction abruptly stopped, with very few appearing after 1500. Today, you can still visit the 28 stunning stave churches in Norway that remain standing.

If you want to visit a stave church outside Norway, you have very few options. One is Hedareds Stave Church in Sweden.

Another is the absolutely gorgeous Wang Stave Church, which was originally built in Norway in the 1200s but moved to its current site in Poland in 1842. We’ve visited it as well, and it’s just incredible.

A handful of replicas exist as well, mostly in the USA. Of the ten or so in the US, the most spectacular is probably the replica of Norway’s famous Gol Stave Church situated in North Dakota.

With so few stave churches left anywhere in the world, the Gustav Adolf Stave Church truly is a unique attraction. Not only is it the only Norwegian stave church in Germany, but it’s a beautiful work of art in its own right.

How do you get to the Hahnenklee stave church?

You can get to the stave church either by public transportation or by car.

By public transit: If you want to travel via public transportation from Hannover, the nearest city, you’ll likely want to take a regional train to Goslar. Once there, you’ll have to walk a few minutes to the bus station and then catch a bus for the 20-minute ride to Hahnenklee.

When you get off the bus at the stop in Hahnenklee, you’ll need to walk 1/2 kilometer to the church. It takes about 10 minutes. Plan on the entire trip taking between 1.5 to 2 hours.

Parking is available in a large lot called Parkplatz Bocksbergweg just east of the stave church. You can either route to it on navigation or follow Am Bocksberg east in town until it dead-ends in the parking area. A short, unpaved trail leads directly from the parking area to the church (350 meters).

The parking lot was free during our visit.

Looking for more active things to do in the Harz?

Take a minute to PIN it!
37 shares