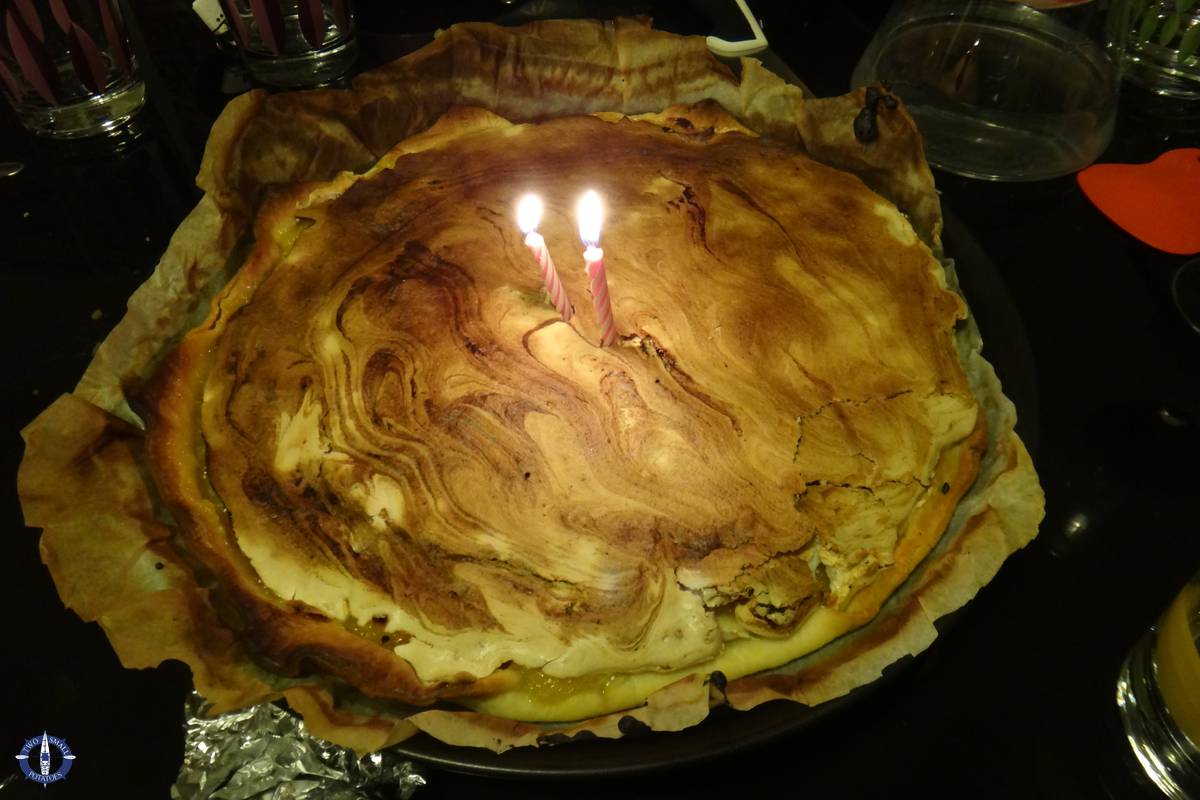 Celebrating A Birthday In Switzerland As New Expats

Expat Life in Switzerland
October 28, 2014 2
*This post may contain affiliate links. If you purchase through these links, we may receive a small commission at no extra cost to you. We only recommend companies we trust!

Is there anything more American than apple pie? Maybe baseball, but nobody really watches baseball. It’s just an excuse to drink beer and eat bad stadium food. Baseball fans, you know it’s true! It might be a bit cliche, but Travis and I both love pie, especially fruit pie. Yet we moved to Europe in July, and I still haven’t used the oven. When Trav’s first birthday in Switzerland rolled around in October though, it was time to give it a spin.

Travis has been after me to make him a pie for months, despite my litany of excuses.

I don’t have a pie plate.

This oven is really different.

Fruit is so expensive here!

Valid reasons, all, but since October is his birthday month, I could no longer resist.

Not familiar with the time-honored tradition of the birthday month?

We learned about some rather surprising birthday traditions in Switzerland.

Switzerland has a peculiar tradition in which the birthday person is expected to provide dessert to co-workers on his own birthday.

We asked a Swiss friend here why this is tradition.

He explained that it’s the best – and sometimes only – way to announce to your co-workers and friends that it’s your birthday.

So instead of being celebrated with balloons, cake, and office shenanigans festively “decorating” his lab space, Trav put his wife to work in the kitchen.

Typically I make strawberry/rhubarb pie, his favorite, but I no longer have a garden cranking out both, nor a healthy stash (of rhubarb, ya pot heads) put away in the freezer. Both are out of season here, and apples are much easier to come by, so apple pie it was.

This was my first real attempt at baking in Switzerland. It felt good to be back in the kitchen, covered in flour with the intoxicating smell of apples and cinnamon heavy in the air.

It was an afternoon of utter normalcy after months of big changes, uncertainty, and bureaucratic problem-solving. Our lives might still be very much uprooted, but at least we could celebrate with a taste of home for Trav’s first birthday in Switzerland.

Not great, but ok.

We’d already discovered that our Swiss oven runs on the cool side. This was then exacerbated by the layer of aluminum foil I used to line the bottom of the oven under the pie. Sugary pie drippings are a beast to clean.

Most of our ovens we had in the US were self cleaning and had a large raised heating coil resting on the bottom of the oven. Putting foil underneath those coils never blocked the heat.

The ovens in Switzerland – at least the ones I’ve seen – don’t have a raised heating coil. The heating unit is beneath the floor of the oven. This meant that my foil blocked the heat, and the underside of my pie cooked slower than the top. Not good.

I always wrap the edges of fruit pies to prevent burning, but this time I also had to cover the top to allow the bottom more time to cook.

Instead of an hour, the darned thing took almost 2 hours to cook.

When I finally pulled it, many of the juices that had seeped down under the bottom of the crust were blackened. It didn’t taste burnt, but it wasn’t pretty, folks.

As always, Trav didn’t complain. Since he ended up not going in to the lab on his birthday, he took the pie in to share with co-workers the following day.

Bless their hearts for eating it.

Who doesn’t want to go car shopping in Europe on their birthday?

Besides the pie-making event, we spent the better part of Trav’s birthday in Geneva. Ironically, we ended up going to test drive a Honda SUV.

Still on the hunt for an affordable used car that can haul kayaks and camping gear for long road trips in Europe, we had pretty much given up hope of finding a Toyota. Pickups aren’t common, Toyota 4Runners are non-existent, and we were struggling to find a vehicle that would meet our few requirements.

Unfortunately when we arrived, we realized it had some rather concerning front-end damage that the garage owner couldn’t really explain. It looked like it had been in a not-so-minor accident and they’d done a poor job of cobbling it back together just to unload it.

It did drive like a dream, but with all the fancy electronic gadgets and leather interior, it was far nicer than we needed.

It had a price tag to match too. Oof. At nearly $10,000, we got the distinct impression the owner was trying to pass off a car that looked nice but had a questionable history. We decided to keep shopping.

Geneva is a fun place to spend a birthday in Switzerland.

It was so much fun to actually be able to toodle around Geneva for the day though!

After we dropped off the Honda, we wandered along the waterfront, stopping for burgers at a street vendor and watching the city come alive along the shoreline as it got dark. It’s really a beautiful city.

The night after Trav’s birthday, we had dinner with friends in Fribourg.

The hostess remembered his birthday with two pink candles in her beautiful lemon meringue pie. Thank you, Rana!

When we were ready to head home, we hopped a train for the 45-minute journey to Fribourg.

It wasn’t the most exciting first birthday in Switzerland that we could’ve imagined, but we had a fun day.

Expats in Switzerland who are buying a car might find these posts useful!