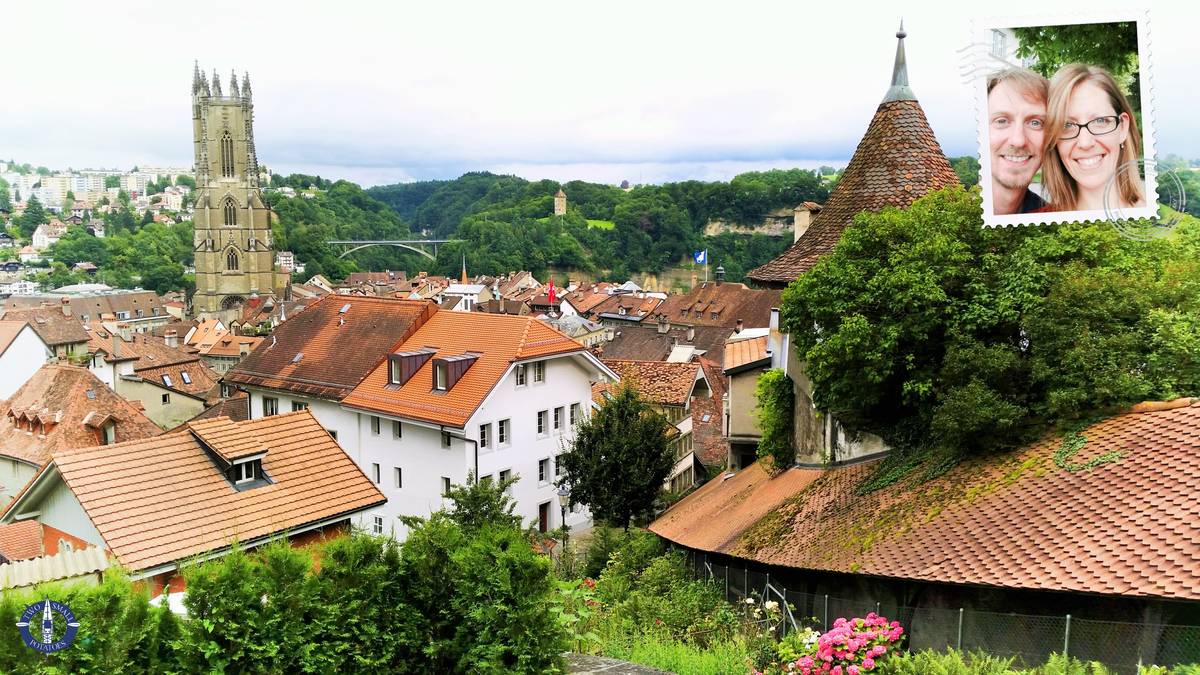 Moving to Switzerland: These Grateful Expats Are No Longer Homeless!

Three weeks ago, our plane touched down in Geneva, Switzerland. It marked the beginning of the next exciting chapter of our lives – American expats in Europe! Since then, we’ve been bouncing from one temporary housing situation to the next while desperately trying to find an apartment. In the end, it took us nearly a month to find an apartment and sign a one-year lease. During that time, we stayed with two Airbnb hosts and two different pet-friendly hotels. Now August 1st, we look back on some of the trials and discoveries of our first few eventful weeks after moving to Switzerland.

For the first 6 days, we stayed in a guest room at an Airbnb in Old Town Fribourg. Though we were pretty cramped with three adults and our three pets in our host’s tiny flat, she was gracious in sharing her space.

Unfortunately, I accidentally blew up her glass stove top, which set us back 200 CHF. For 50 CHF/night, it still was far cheaper and better than a hotel.

Plus I learned my first lesson in Switzerland; you don’t cook directly on glass stove tops like in the States. You lift the glass.

Ugh. Moving to Switzerland is hard.

Because our first Airbnb had other guests already booked for part of July, we had to leave after less than a week.

Taking a cab, we headed to the adorable Hotel du Faucon, also in Old Town Fribourg, for just one night.

While we had a nice night at the Hotel du Faucon, it’s a bit pricey for a long-term stay option. So once again, after packing everything up – luggage, pets, catbox, etc – we left the Hotel du Faucon and moved to another Airbnb we found with just a few hours’ notice.

We’ll never forget when we first arrived at the apartment and were greeted by Z and Jo. The couple had listed a single room in their shared apartment and didn’t have pets, but welcomed our THREE cats and dog we brought from the US when moving to Switzerland.

Z and Jo were just amazing – welcoming and funny. They cooked for us. They answered questions about where to get new cell phone plans so we’d have internet. They immediately treated us like old friends, introducing us to family members and trying to help us find an apartment.

We ended up staying for a week, after which time we had to leave because they too had other guests arriving.

Our week with Z & Jo was entirely memorable, with a trip to Thun Lake to go paddle boarding – instead of apartment hunting, traditional Moroccan dinner cooked by her parents, and mornings spent chatting around the breakfast table.

At the time we didn’t know it, but they’d later invite us back for BBQs and parties. They included us in their fantastic circle of friends, for which we’ll always be grateful. They were the welcoming committee we so desperately needed after a rather rocky first few weeks after moving to Switzerland. They would set the tone for our entire time living in Switzerland!

We next landed at a hotel called the Hine Adon. This particular hotel is an extended-stay place, offering nightly, weekly, or monthly rates. We booked for nine days, thinking we’d definitely have to find something permanent by then.

Our stay there ended up being SO bad!

In just over a week, we ran out of the single roll of TP the hotel provided – for a 9-day stay.

And to cap it all off, the fridge broke. The groceries we’d bought rotted in the time it took them to fix it. Plus the workers left a huge gross pool of putrid water on the floor when they were finished, and neither they nor hotel staff cleaned it up. With nothing else to use, we sopped it up with one of the bath towels we had, ringing it out repeatedly in the sink.

We couldn’t get out of there fast enough.

Towards the end of our stay at Hine Adon, in a stroke of luck we found an advertisement for a gorgeous house in the country. Like, so gorgeous I scanned past it multiple times and discounted it because it was out of our price range and way too big and nice for us.

I’d fallen in love with the home already from the photos though. We were also desperate, didn’t speak French to even communicate with anyone when searching for an apartment, and we talked about the possibility of getting roommates to help with the rental costs. We decided to at least go see it.

Not only was the home listing posted directly by the owner instead of a property management company, but we liked him immediately! He spoke English and was ridiculously charming. Knowing how desperate we were to get into a permanent apartment, he waived a bunch of technical requirements most Swiss landlords typically require, agreeing to let us move in asap on August 1st.

Relieved to have found a flat, we next had to figure out how we were going to get all our stuff to our new house 10 km away. It would take multiple trips by a combination of bus and train to haul our luggage, pets, and the few things we’d had to buy after arriving in Switzerland.

Thinking it wouldn’t likely pan out, Travis called someone in the Biology Dept at the University of Fribourg and explained the situation. She generously offered to ask around on our behalf for a vehicle. Within minutes, she called back with the perfect solution. The Ecology Dept had a van that we could borrow for 0.60 CHF per kilometer.

It was so exciting to find out that after a month without a car, we would have an easy, stress-free plan for moving day. In preparation for our big move to the country, we made two trips to the grocery store near our hotel for a mad shopping spree. Up ’til that point, we still had only our 2 suitcases with some clothes, pet necessities, our air mattress we’d been hauling around in our luggage, and a single pillow.

We didn’t think about it until July 31st but we didn’t even have a blanket!

We knew stores would be closed the next day on the 1st for Swiss National Day, so it was our last chance before shops closed until Monday.

Scurrying around the store, we grabbed as much of the important stuff as we could find. We bought groceries, a comforter, a permanent kitty litter box, and a moka – our favorite kind of stove-top coffee pot.

With Trav upstairs in the housewares department madly shopping for a frying pan so we could cook something and me downstairs trying to find Friskies cat food in the groceries department, we closed down the store.

Which brings us to August 1st – moving day!

On the morning of our big move, Trav walked from our hotel to the Uni while I packed up our things. He easily found a parking spot across from our hotel – a small miracle – and we were on our way.

We still have so many things to learn about expat life after moving to Switzerland, but yet another giant hurdle is behind us.

We finally found our home, sweet home in Switzerland!

Are you future expats in Switzerland?

Already accepted a job? Wonder what other hurdles we faced? Shoot us a message in the comments below!

Know Before You Go
20 shares